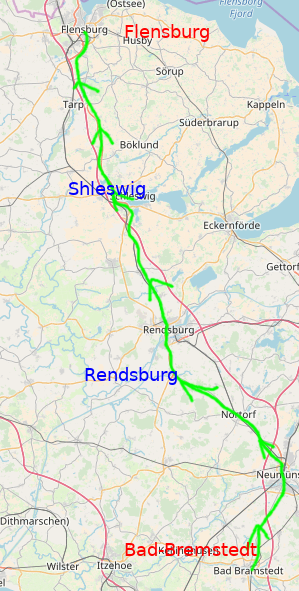 Slept badly in the campsite last night. It was cold and my air matress seems to have very small puncture and it deflates impartially, just enough so that my body to intermittently come into contact with the ground when I’m turning in my sleep. I woke at 2am, 5am and 6am, before finally waking for good at around 7am. Again, only bread and peanut butter for breakfast with a nice cup of coffee.

I used the facilities to wash my cooking equipement. For dinner I had a pack of reheatable rice with some lentils. I cooked my dry lentils for about 10 minutes, not enough time as they didn’t taste particularaly good. I think I might get some vegetable stock and try lentil soup at some point.

It had rained the night before but it stopped before I left the tent and didn’t start again all day. When I left the campsite the owner looked up but ignored me and I left, continuing on my way to my first waypoint, Neuminster. From there I would ride to Rendsburg before making the final push to Flensburg.

Rendsburg was on the other side of a large shipping canal, the Kiel Canal. There were no bridges only the gigantic iron Rendsburg High Bridge - high enough to let gigantic ships pass beneath it. The land is flat on either side and trains are elevated to the bridges height by a spiral loops. It is the longest railbridge in Europe.

Realising that there was no possiblity of crossing the railbridge I wondred how I would cross. The cycle route indicated that I could cross under the railway bridge, presumably by ferry. When I got to the crossing it was closed for maintainence, or just closed, I’m not sure. Interestingly it wasn’t ferry but a transporter bridge, where a section of road is suspended from the railway bridge above and moved back and forth. Before I turned off to the defunct transporter bridge I thought I heard another cycling shout at me “… .. nicht mehr” (something, something, no more). I looked back and his gaze wasn’t directed at me so I ignored it.

I stood in front of the railway bridge and said “Well, how the fuck am I supposed to get across now?” then the other cyclists (an old man and his wife) caught up with me, he was beaming and said that there is a crossing 1km down the river, I said “Is there a bridge?” in German, but the old man looked confused and turned to his wife “Did you understand what he said?”, yep, my German still sucks.

It was a ferry crossing and it was 2km down the canal. It didn’t cost anything and I made my way to the town center and found a bakery.

The bakery didn’t have any savoury food left (and I was all out of bread and backed beans). I got a coffee and an apple cake. I decided to book my hostel for the night.

I decided to stay in a hostel, as there were no less than 3 in Flensburg, inclduing a hostelling international one, which was full. The other was not and I booked (again I used my German, but again the guy didn’t have a clue what I was saying).

There is a cycle route (marked on my map as OM) which tracks my route and takes me all the way to the top of Denmark, it is not direct however, and I can often find cycle paths on direct roads and avoid it altogether. Sometimes I find my self on it however, and today it yielded a surprise. 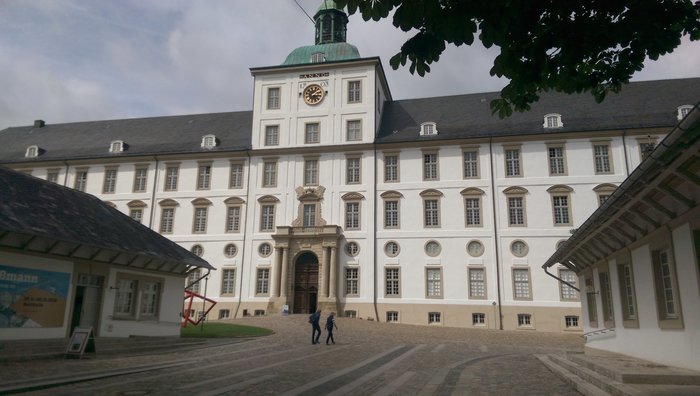 The region I was cycling through was Schleswig-Holstien, and I was in the eponymous town Schleswig. Following my GPS I found myself driving through the huge gates of a manor, a gigantic, magestic, white building. The path skirted around the side and then I found myself riding through the gardens where there were numerous sculptures and water features and it made me wonder if I should stick to the cycle route more often, but time and my stamina is limited.

Whilst the last few days had been flat, this part of the route became undulating. The most hilly it has been since day one.

I arrived in Flensburg (home of the Flensburger beer, a national favourite) and the closest town to the Danish border (which is just 7km away). I found the hostel and booked in - it was more expensive that I had thought, but I piad for breakfast and the room and it cost €28. The girl at reception let me put the bike in the room (“My boss doesn’t like it, but as long as it’s clean). I am currently the only person in the 4 bed room. 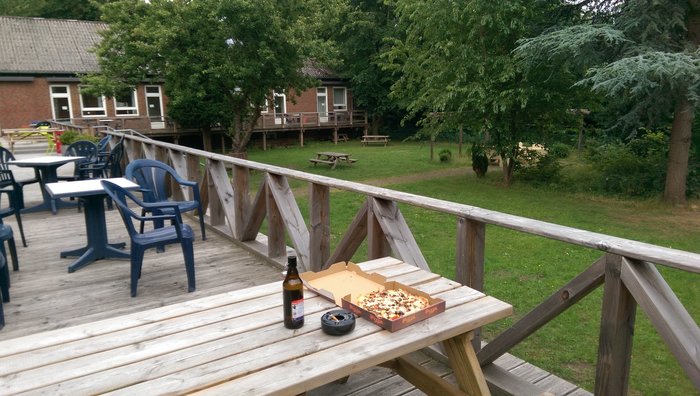