I am now sitting under the eaves of a chalet in a Danish campsite, my tent is pitched in front of me and I’m overlooking a pond with ducks swimming in it, the sun has shining. I was sceptical about this campsite to start with, it was just off the main road and there were plenty of other options further off the track in more desirable locations, but I had done my time for the day so I risked it.

There was a man standing by the gate who welcomed me and said that it cost €10 and gave me directions as to where I could pitch my tent and informed me that the showers and other facilities were all free. I said that I had Kroner or, €10. I flashed the note out of my walet and he said in a Danish matter-of-fact way “That is ten euros”.

I was glad to stop because the sun came out today which was welcome at first, but after 3 hours I could feel myself starting to burn. I had a cap to protect my head, but my hands were visibly going red.

Things I need to buy:

The day started in the hostel, I woke up as normal at around 7am, my head hurting somewhat. Looking in the mirror I still had large bags under my eyes. Strange that I seem to be tired, but seemingly unable to get anymore rest than usual. Breakfast was a buffet.

A man greeted me and then asked if I had my breakfast token, I searched myself and I did not. I went back to the room and turned it over, it wasn’t there. I went back and he said not to worry about it and some other stuff that I didn’t understand. I ate a bowl of muesli, two bread rolls, two slices of cheese, I drank a glass of orange juice and two coffees. Then I left.

It was a short ride to the Danish border, which I passed straight through (as Denmark is in Schengen area). I then found myself in the town of Padborg. I got some money (500KN, or about €67) and searched around for a supermarket (I had very few supplies left).

There was the Netto discount supermarket familiar from Germany, and a new one (sounded like “Burger”) and so far these are the only two supermarkets I have seen. I studied the exterior of the Burger market - I always prefer a supermarket with a glass front through I which I can keep an eye on my bike while shopping. This one reall didn’t have one, but I could put in front of the door.

I removed my laptop bag, detached my mobile phone, put the lock around the wheel and went inside. 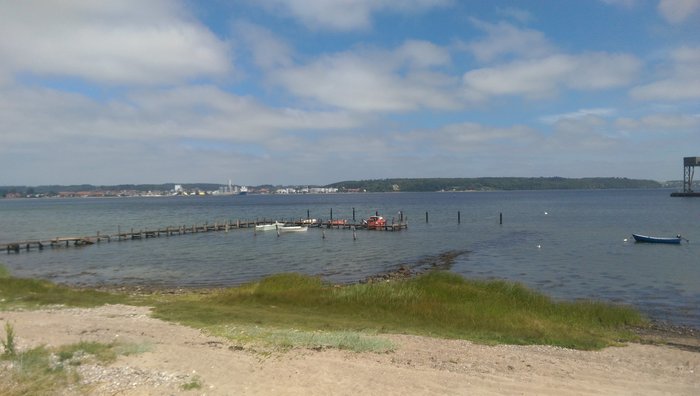 First stop, muesli - I need something for breakfast on the campsite. Then assorted nuts for munching on the road. The nuts I found were ridiculously expensive (40KN, about €4.50) and they were only 150g bags. There was a cheaper packet of discount salted peanuts below them for 10KN (€1.40) which I got. Then I got some vegetable broth (almost €4) and some dried banana flakes. I was tempted later in the day to buy a beer, but a single can cost around €2.50!

Denmark is expensive I think I’ve spent at least €25 on shopping today, twice as much as in Germany.

I lost my way several times today so my route was not the one I expected (following the EuroVelo 3). I took a wrong turn and was on a different cycle route which (Ostsee weg) which ran closer to the sea (the EV3 runs more in the middle). By the time I realised I was too far gone to turn back, so I adjusted my plans and carried on. I can probably join back up with the EV3 tomorrow.

Again, the cycle path certainly added more kilometers and if I had taken the road I would have been further north than I am now. But the path was interesting, often going onto rough country lanes and dirt paths, running through forests and up short, steep ascents. These sections put more content into the day. 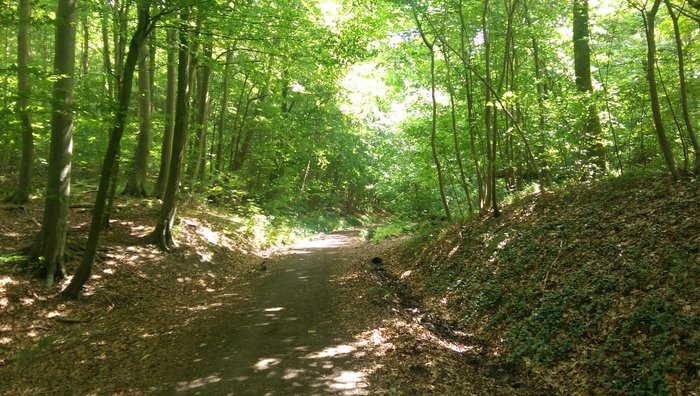 The Danish language is only familiar to me through TV, but much of the signage is vaguely similar to German (Bageri (DN) is Bäckerei (DE) is Bakery (EN)). But when cashiers have told me the amount I need to pay it didn’t sound remotely like German. I will try and learn some basics while I am here if I am able (like, for example, “thankyou”).

The campsite is one of the cleanest campsites I have been in (especially regarding the facilities) where the others have been in Switzerland.