My cycle computer broke today, I don’t know how many kilometers I did or how long I was riding for, this was the zeroeth problem. But it was a good day.

At 11pm last night it was still light. I slept well. I didn’t wake up until 7am, and then dozed and woke up late an hour and a half later. I made my coffee and had muesli (moistened with water). I packed up the tent, as I pulled out one the pegs there was a sudden crack and the tent changed shape. Puzzled, I inspected it and the tent pole had cracked.

The previous day I had found a zip bag with a chrome metal tube in it, it was covered in fine brown mud-dust. It was the emergency “pole repair kit” which normally is stuffed away inside the tent, but had decided to escape. I didn’t realise I would be needing it the next day.

This isn’t the first time this has happened with this tent either, two years ago it broke in exactly the same way and I tried to repair it with a generous amount of duck-tape (the solution lasted for about 2 hours). Then I found a camping shop who fixed the pole for me.

Anyway, the pole is broken again and the emergency slide-over tube is holding it in place.

This was the first “problem” of the day. The second came to me 30 minutes after leaving the campsite, I was thinking about the coffee I had drunk this morning, and then I remembered that I hardly even started it, then I remembered putting it on the platform of the chalet I was camped next to. Then I remembered that I didn’t collect it. This was very annoying as it was a good thermal cup and I could have doubled back and added another hour to my day, but I didn’t.

The third was taking the wrong turning at Kolding. Looking at the map now I can’t even remember what I did. But I was on the wrong track again, I had intended to join the EV3 track on day one, but I missed it. So the plan was to join it today. I would continue on the path I was on and rejoin it later.

The cycle tracks took me through some beautiful countryside. Lots of pine trees and quiet forest roads. I rode into a valley at one point, riding up a very steep incline, then descending into a vast plain with cows and horses and birds before ascending the other side and descending once more.

Most of the day was spent on these roads and in this beautiful countryside and all of the day was sunny. Very sunny. My hands were slightly blistered from the afternoon sun yesterday, luckily I had the dregs of some sun lotion with me which I applied liberally to my exposed hands. But so far the rest of me is holding out, feet and nose are slightly red. Hopefully my skin will adapt before I am a blistered mess. 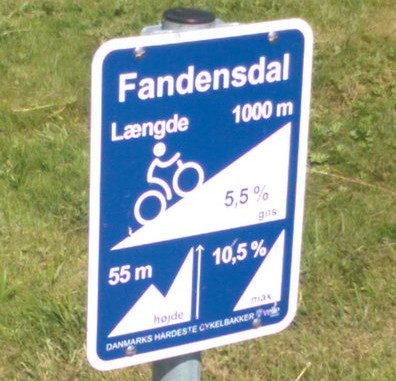 When I finally joined the EV3 it took me to the town of Jelling where I stopped for lunch. I found a supermarket and then searched for a place to sit down, behind the supermarket I could see a large mound which looked like some sort of public area, so I had a look. There was a large field, two large mounds, a church, a ring of strange markers surrounding everything and a museum “Enter the Home of the Viking Kings”.

Jelling is where the first Monarchs of Denmark ruled from. The strange markers outlined where the “stone ship” was laid out, in which were two apparent burial mounds, and two stones - the “Jelling Stones”. One raised by Kind Gorm in memory of his wife, the other celebrating the conquest of Denmark and Norway. This later stone is the first recorded use of the word “Denmark”.

I sat, drank a beer and ate my can of baked beans and watched a robot lawn mower going about its business.

As I continued I noticed lots of Christmas tree plantations - and thought what a waste it was to grow trees all year only so they could be used for a few weeks and then dumped on the streets of Berlin.

I struggled through more of the path, aiming for the campsite where I am now, I had hoped to push to Viborg today, and even be in Norway in 2 days, but it’s now looking like I am behind schedule.