Today marks 7 days of cycling and I’m in good shape, so far I’ve covered around 806km. I’m slightly behind my so-called “schedule” as I had intended to be ready to get the ferry to Norway today, but I will only be able to do that tomorrow with some effort.

Slept adequately last night, but was uncomfortable due to the deflating air-mattress, I think the other night I was camped on softer ground. I wanted to head straight to Viborg, and saw the tempting “13” road, but wasn’t sure if you were able to cycle on it.

I lingered around the reception for a few minutes planning my next steps and saw a man walking to go about his business, I asked him if he spoke English and if he knew if I could cycle on the road.

“It is the old road that ran from the top of the country to the bottom, we have the highway now. You can cycle on it … what time is it?” I showed him my watch “yes, now should be OK, it should not be too busy” “Is there a cycle lane”, “No, no cycle lane”. He then asked me the usual questions about my journey and I said thanks and made my way to the road. I had an opportunity to rejoin the EV3 cycle path 2km further on.

I could see lorries as I approached the small 2 lane road, and felt slightly vulnerable as I was cycling along it (although it was not that busy, and I probably wouldn’t think twice about it in England, but you get used to the security of cycle lanes). A bit further on a saw a sign-posted cycle route to Viborg, and I took it. It was basically the same one that I would have taken anyway. 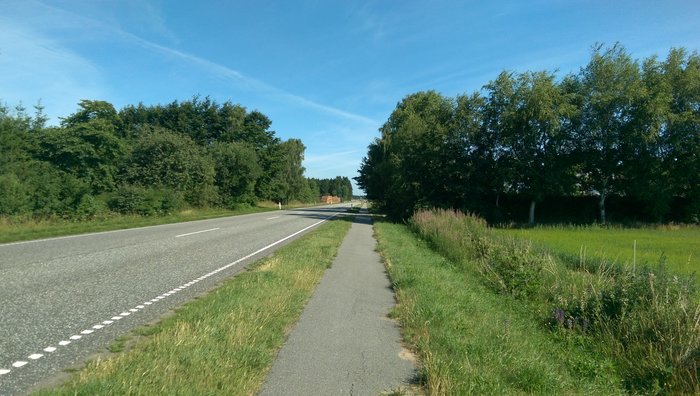 I made good time and had quickly covered the distance to Viborg, on the approach I was riding along side of the lake, but it was masked by the sun-bleached foliage and you could just see glimpses of the rippling waters. 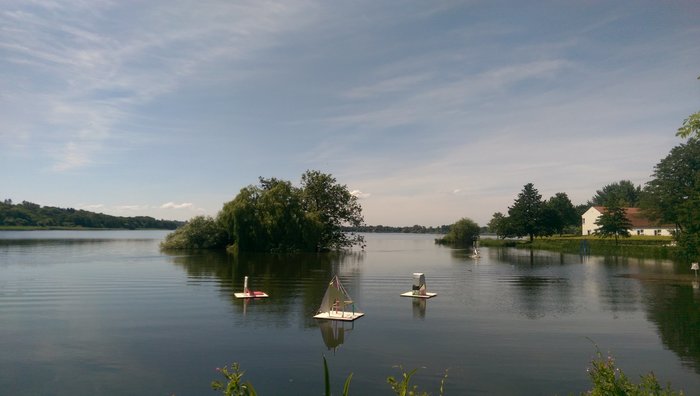 Searching for lunch I stopped after around 50 and got my self an expensive beer, when checking out the young girl said something to me, I tried to imagine what it could be, it didn’t sound like a number, so assumed she was asking me if I had a loyalty card. I shook my head, obviously the wrong response as she then said “Twenty”, “a ha!”. I looked into my wallet and asked how you said it in Danish and it didn’t sound much like I would have expected. But I repeated it anyway and she nodded, verifying my pronunciation, and now I’ve forgotten it. “Are there any parks near here?” “No, but there are two lakes” “Benches?” “Yes, lots of benches”. I had a tentative look around, both lakes were in the wrong direction, then carried on.

I found the next village 10km later, and found a nice bench in some shade. I was concerned about my beer getting warm, so I stashed it deep into my rear pannier and it was still pretty cool after half an hour. Baked beans and beer. 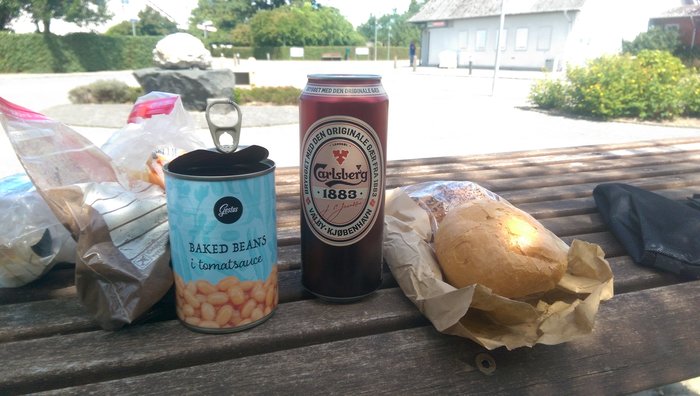 The heat was oppressive at this point. My lips were dry and I was rationing my water, keeping my salt levels up with a steady intake of salted peanuts. I don’t normally mind the heat as long as there is enough water, but that’s only after my skin has adapted to the sun. Now I was aware of the potential of sun burn. Upper legs, hands and feet were all risky areas and are slightly burnt but should come around with a good tan in a few days.

Lots of horses, lots of hares, big dragonflies, The horses are interesting, they are usually in groups and once they were all running down a huge field together beside me, often they can be seen necking each-other in family groups. 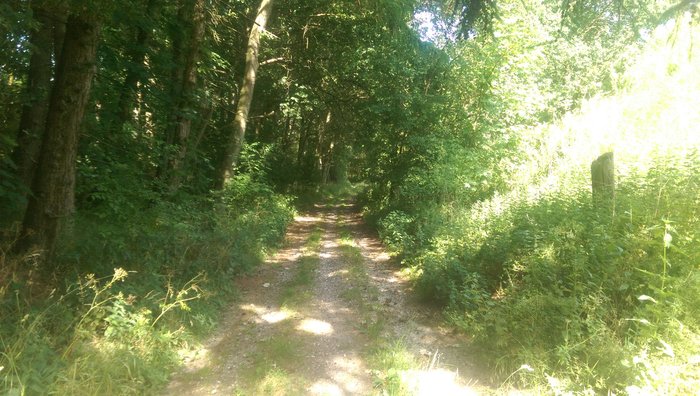 While I have lost a few things on the way, somethings have come back into service - my MP3 player was water damaged when I left and stopped working, it has now dried and provided me with music for most of the day. My cycle computer has also, so far, returned to a working state after it mysteriously reset itself twice yesterday (the battery cover was not fully closed, which might have explained it turning off… time will tell).

I am now in a campsite, like the campsite yesterday they have cooking facilities, but the cooker is very slow, and my soup has been cooking for over an hour now and has yet to boil. Hoping to eat my dinner and sit down in the TV room and do some programming whilst charging my laptop. 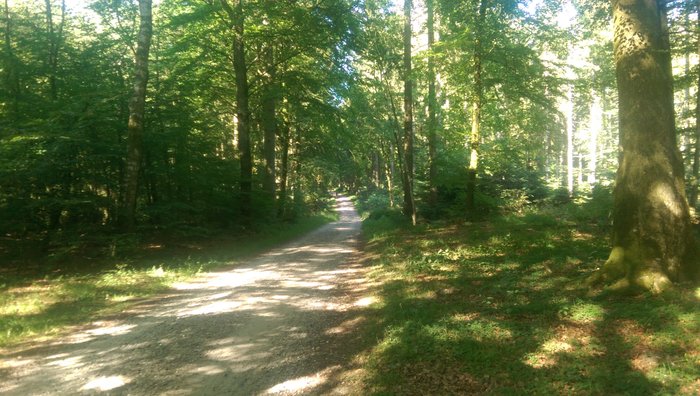 Another forest road, with runner in the distance

I chatted with a guy in the kitchen, he lives on the campsite but had previously been cycling to Gibraltar and Sweden. I mentioned how expensive (beer) was compared to Germany, and he said that Denmark was cheap compared to Norway. Glad I’m doing this on a paid holiday.

He also mentioned the camping rules in Denmark - it’s legal in state forests to camp without a tent for one night, and in some places there are designated camping areas. I actually investigated one today but it was overrun but a scout group. But it is nice to have a shower and possibly benefit from other conveniences such as Wifi, shower, electricity (although Wifi hasn’t been forthcoming).