« Silkeborg to Rebild
Kristiansand to Lyngdal »

I am now on the ferry crossing to Norway. Feeling a bit hungry but unwilling to pay the €30 asking price for the on-board buffet (the ticket cost €42) but everything has gone to plan so far.

Woke up early after a good nights sleep, had muesli again, but this time mixed with jam in addition to water, and drank my morning coffee from the camping cooking pot - which is actually better in some respects than the thermal mug as it loses heat quickly, meaning I can down the whole lot after about 1 minute.

I drank a bottle of beer (33cl) last night and returned the bottle - in Denmark they also have the deposit system with bottles.

I left the campsite, turned left and continued on the cycle path. It went onto the now familiar gravel and dirt tracks, with very steep sections requiring me to change into the highest gear. Sometimes my back wheel would slip in the gravel as I pushed it up, on the way down there was often either deep gravel or sand which could cause momentary loss of control. I cycled for about 45 minutes, and then hit a village.

Somehow I had done a complete circle in 40 minutes. The cycle path was interesting and certainly made me sweat, but I realised that that whole detour was completely unnecessary, and by going back down a section of path I had returned on, I could rejoin it at the desired point.

From thereon it was plain sailing, I decided to run on the main road and kept a steady speed of around 21kmph until I was in Aarlborg. Stopping on route at a “Bagerei” to get an actual Danish pastry. It was like the typical English danish but with cinnamon and chocolate on top, it was delicious. I also got some bread for lunch.

I didn’t stop in Aarlborg and continued straight on to Hirtshals. The boat would leave at 5pm. I had plenty of time, and at my current rate would get there with almost 2 hours to spare, but better earlier than late, and I didn’t know if I would have hassle with tickets or going to the wrong port.

The sun was out today, but it didn’t seem as hot as yesterday. I took precautions with my feet by wearing socks to shield them from the suns rays, but it was probably unnecessary.

For lunch I found a picnic area, but there was no shade. Accross the road there was a water tower with hige columns supporting it and a door in the center. I sat on the door step and had my now stable lunch: Baked beans and beer, actually had trouble eating the whole lot, although I had already ridden 60km by this point, I had eaten well last night, and the 60km were relatively easy, mostly on flat ground. 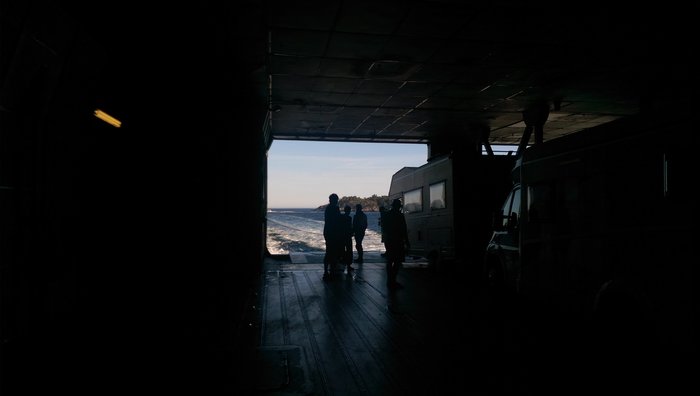 Looking out from the ferry to Norway

As of today I hadn’t spent half of the money I took out when entering Denmark, so was hoping I would have enough to get the ferry. I still have around 250kr left.

I cycled up my allocated lane, it would be another 45 minutes before the ferry arrived. I had bought a beer for the wait and sat down reading the news on my phone. It was very windy and I wondered if this is the sort of wind I can expect when cycling up the west coast.

First impression of Kristiansand: tourist pit. I think I expected a quiet town like the ones I had passed through in Denmark, but the tourists are here in force. I know I am technically part of the problem, but if everybody was like me at least we’d be spread out and not congregating in towns filling the sewers with our waste.

The campsite was about 3km or so away from the town center, and it’s not bad. It’s packed, but quiet and I have pitched me tent on a little plateau near a large rock and some trees. On my map it said it was a 4-star site, not sure what that means, but other than toilets and showers, the only extra is the kitchen with the same ridiculous hot-plates that I spent 1 hour cooking my dinner on last night. The price was 160kn (about €16) and the shower was to cost an additional 30kn (over €3) so I turned it down and instead performed by ablutions in the sink instead.

I managed to charge my laptop on the boat, but my main power pack will probably last only another couple of days. I’m hoping to stay in a hostel tomorrow, and if I do, and it’s cheap enough, I may take a rest day. 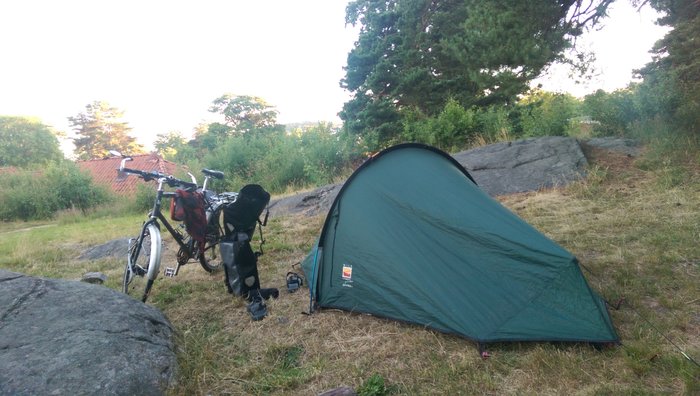 « Silkeborg to Rebild
Kristiansand to Lyngdal »