Another good nights sleep and I augmented my breakfast once again, this time with chocolate milk - Muesli, jam, chocolate milk and coffee. I set out to follow what officially seems to be the EV12 but is marked on signs and on my phone as EV1.

I was soon confused having arrived at a closed pedestrian/cycle bridge and yet all the while seeing people cycling accross it - where were the going? I wondered. Following them I found the ingress and the cycle path followed the highway out of the city.

The sun was shining again, but not as fiercely as the previous days, and the cycle path diverged from the highway and followed an incredibly peaceful road and I cycled for about 3 hours letting my mind wonder and observing the Norwegian landscape.

The first thing I noticed was the houses - they are majority of them seem to be made of wood, with either long vertical or horizontal planks, and often painted white or red.

Then of course there is the rugged landscape, riding along the coast there are huge slabs of rock and ample forest. With the wooden houses dotted around, sometimes 4 clustered in a small valley.

The time is really flying by now. I’ve done 2 hours before I’m aware of it. Today I did almost 8.

I stopped at a supermarket, the first I had seen in hours, and was at first deterred by the business of the place, hundreds of parked cars and people everywhere (it was a group of supermarket-type shops). But outside my market was a group of salespeople trying (as I found out) to sell cheaper electricity to people leaving the shop, so I figured they would notice if anybody tried to ransack my bike.

Inside I got more muesli, a couple of bananas, a loaf of bread and a can of beer. I got one of the “cheaper” cans of beer, and it cost around €2.15, and this was a discount market. I think the cheapest one (I found) in Denmark was about €1.80. In total my shopping cost around €8.

Realising I had forgotten to buy Pasta, I stopped again a few kilometers further on at a shop next to a lake and got the pasta and a cheap sugary vanilla pastry. Paying with cash was confusing as I now have a mixture of Danish and Norwegian kroner, and I had to ask the cashier to sort them for me. I then sat on a picnic table outside in the sun. 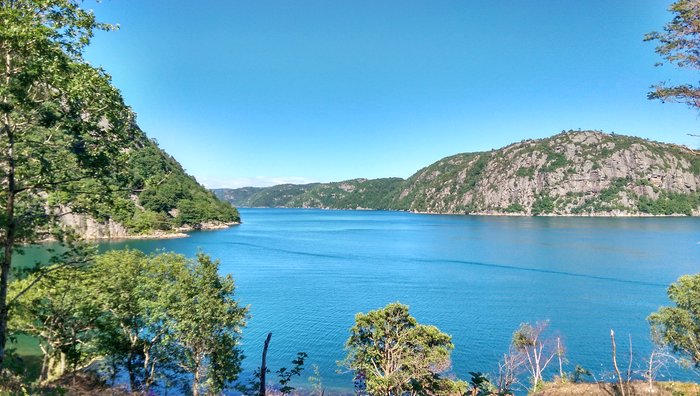 A Fjord, I think

A couple of sections were very tough. At one point the cycle path continued from a perfectly good road up a very steep gravel incline and I wondered if somebody was joking. I checked my map, and that was indeed the path, so I clicked down (up?) to my highest gear and started grinding away. This was around 3 of rough and steep up and down.

Near the end of this section I spied another cyclist heading my way, I could see a small flag flying behind him. He approached with a friendly smile and we both stopped and he talked to me in Norwegian and then in English, he asked where I was going, where I’m from and so on, then told me about his journey.

He has been travelling the coast for 4 months. Starting on the border of Russia above Finland (he was Finish). First of all he skied, then he used a kayak and now he is cycling, I looked confused and looked at his bicycle - “Oh, I have a car” he said. So I guessed he was travelling sections then taking the train back to his car. He was now on his last leg to Kristiansand where he would get the train back home.

The last challenge of the day was the first “mountain” of the journey. Although it was only 260m of altitude (less depending on how high I started) it was a very steep and long climb. I was ascending at the speed of about 4kmph for stretches of it and rarely rose above 7 with sweat pouring from my body. 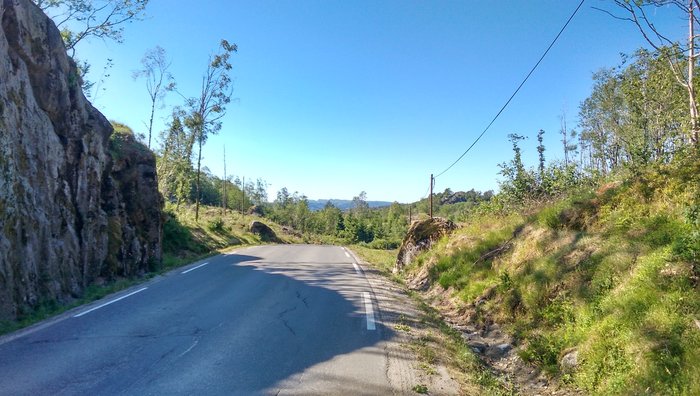 After this I decided to stop a bit earlier than anticipated as I had already done 110km. It was a choice between two campsites, one called “Bibelcamp” located on the coast, and the other somewhat inland. I choose “Biblecamp” which I thought might be a christian indoctrination center, but I can’t see any religious symbols anywhere.

It cost only €10 and I have now eaten (lentils and pasta again) and am sitting under the eaves of the main building with my plugged in to an out-of-door socket. My powerpack is running a bit low, might see if I can leave it charging in reception overnight.