I took a rest day at the hostel in Stavanger, it was a nice hostel, the staff were friendly and helpful.

I tried to maintain my bike, attempting to first fix my gears (I think I made them worse overall, but at least now I have a better understanding of how to adjust them) and I tried to fix my sinking handlebar bag, but ended up tightening it too much and breaking off one of the bolts - there were 3 bolts and one of them is now rounded and stuck, the other broke off, and another one is fastened far too tightly but is the only one holding the whole thing on now, and I’m too scared to loosen it up and adjust it properly. Hopefully it will hold out (I should have dissembled the whole thing to start with).

I did some shopping, and got some chain lubricant, a cap (in anticipation of a temperature drop) and some summer cycling gloves and checked the ferry port to see where I could go from here, the cycling route was not specific on how I should continue - the route I was following went to an island and then abruptly stopped then continued on another island, but there was no ferry to that island. I could however get the ferry to Nedstrand and the cycle west to rejoin my route.

I recognised a cyclist waiting outside the ferry station - I had actually seen him several times of the past few days. I first encountered him at the Bibelcamp camp site. The alarm went off in the toilet block and he walked out of the shower and looked at me enquiringly wondering what was going on. I shrugged and carried on. Then the next day I passed him while he was having lunch, and again when I was cycling back to the campsite I had passed (on my 11 hour day).

I approached him and said “hello”, he seemed non-plussed and I’m not sure he recognised me, and then his friend came over, who I also recognised from the campsite. We chatted for a while and then I left them (I was running at the time), they are on the same route as me, so I may well see them again.

There were two possible crossing times, one at 7:30am, with a single change, and the other at 15:30. I was reluctant to leave the hostel and dive back into the cycling/camping routine, and considered staying another day, but I figured if I took the 15:30 then I would have most of the day at the hostel with no extra cost and still make some headway to continue the next day. 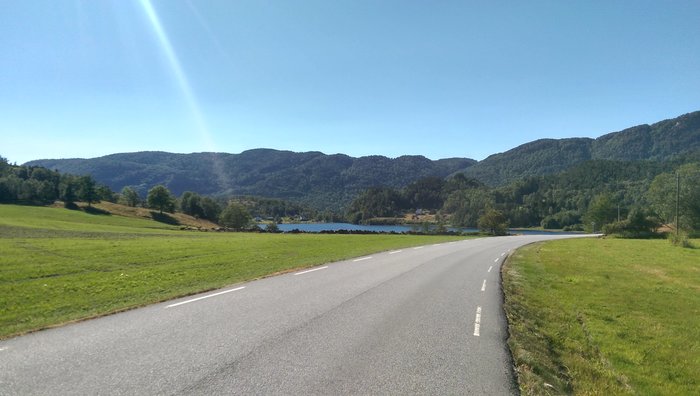 Life across the water

When I left the hostel and got my ticket at the station, I saw two more bicycles, and then the cyclists and they sounded distinctly English, I said hello, they were from Scotland and had just got in from England to Stavanger, so it was there first day I think.

The crossing took about an hour, after getting off I had another chat with the cycling couple from Scotland and then headed off, then realized that I had no Norwegian cash, then that I had no euros, and then that there was no cash machine in this village.

I tried the next village, and asked a clerk in the village shop, he said I could get money at the counter, so we tried my German bank card “service not available”, well then surely the VISA would work “service not available” as a last attempt I tried my remaining card, and same result. He said that the next cash machine was 35 away, which was fine and the campsites probably take card anyway.

I rode for an hour and found the first campsite, but it didn’t look very appealing and I couldn’t find the reception anyway, the second one was only another 10km on. The road was actually fairly flat and I made good time.

Cycling into my current campsite a woman was mowing the lawn and looked at me welcomingly and I asked if this was the camping, she said yes and told me where to put my tent, and when I asked her if she took card she said “yes”. 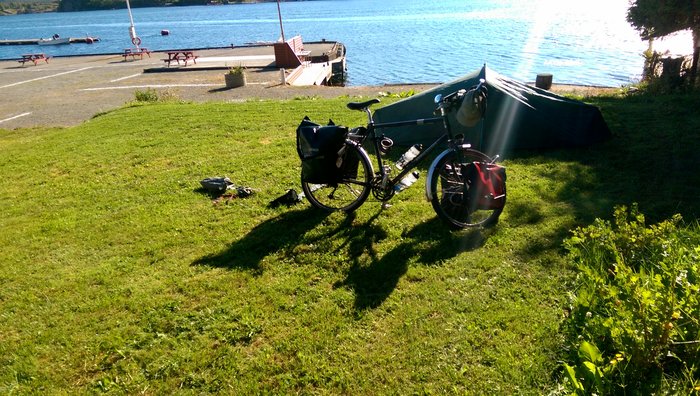 I’ve just had my dinner and I’ve tried a variation on my lentil soup recipe. I’ve had a whole container of dried beans with me all of this time, whilst getting through two bags of lentils.

Last night I put a bunch of beans (black and red) in a container and let them soak for about 12 hours. I cooked them with lentils, vegetable broth, bean broth (the water the beans were soaking in), added pasta after 10 minutes and finished off by adding a dollop of pesto and a sprinkling of Tabasco. Served with a loaf bread from which I cut rough pieces and soaked in the soup.

Doesn’t taste bad, not good either, but full of proteins and energy for cycling.

Dried beans are great food to have when cycling as they take up little space. The only trick is remembering to soak them (pretty sure you can cook them dry as well, but it would take at least an hour of camping gas usage).