The woman came around at around 9pm to collect my payment for the camping. We went into the previously-closed reception area and I paid about €15 with my card and I asked if there was anywhere I could sit down and do some work on my laptop. The reception was connected with a largish common room, but it was not being used for that purpose currently, but she showed me some outdoor plugs and where I could sit down under the eaves of the building.

I remarked on how quiet it was, and she said it was because all of the campers / residents were on holiday (Croatia, Spain), and that they were all Norwegian. I said I worked in Berlin and she asked if I spoke German, I said a little, and then she lamented how many Germans come to the campsite and cannot speak any English, and that she just got back from Spain, and few Spanish people speak English. When I said I was from Berlin, she asked if I was at university there, good to know I still pass for a student at 37.

Every Norwegian I have spoken to (and every dutch person for that matter) were able to speak fluent English. To the extent that I rarely use my prase “Forstår du engelsk?”.

When I woke up it was to a fresh, damp and cloudy morning and I wondered if the weather would turn (I haven’t checked the weather reports). I left and resumed the number 1 cycle route.

My rear mud guard had been rubbing intermittently against my tyre for the past week, and had recently become an almost constant irritation, and every time I tried to locate the problem I could not. This morning I saw it, it was the one of bungee cords holding the tent on the back of my bike, it was threaded in such a way that it was pushing against the mud guard. Fixing this my bike was again running silent, which is always reassuring.

Another picture of the road

I used my gloves and hat, although it was not so cold as to require me to change the rest of my gear. The hat has the added benefit of shielding my ear phones (when I wear them) from the wind. The wind is amplified with earphones in, and up to a certain point you can only turn the music up, but the ringing in my ears is a constant reminder not to do that anymore. 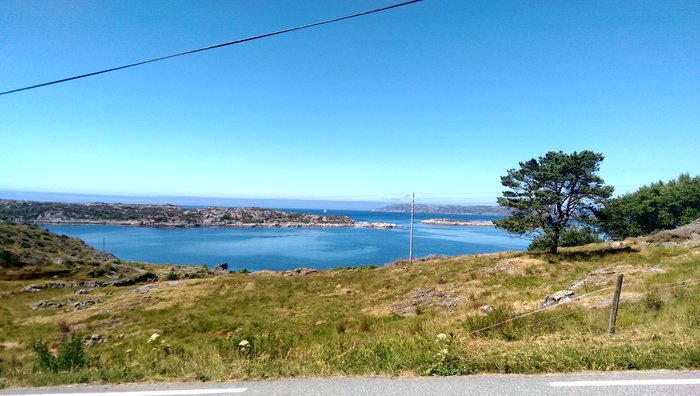 The first stop was the town of Haugesund. I found a bakery (the first I have used in Norway, there don’t seem to be many of them - it’s mostly supermarkets) and got a sort-of cinnamon pastry with a splodge of vanilla in the center. I considered getting a coffee and sitting down, but then the cost would have been about €8, so I passed and found a bench in the center. 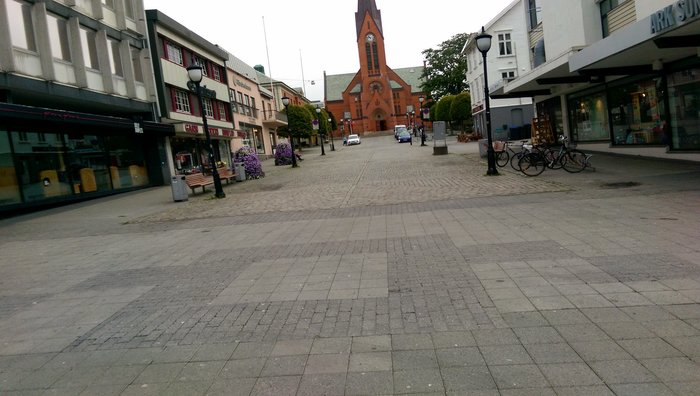 The second stop was the single ferry crossing of the day. I hadn’t done any research, and when I got there, there were no cars or people. There was a toilet (with a shower) and some benches. I looked at the timetable but couldn’t make any sense of it. I researched on the internet and found the correct time table and it ran every hour. Soon a few cars turned up. I sat down and had my lunch and eventually watched the car-ferry pull in to the dock. 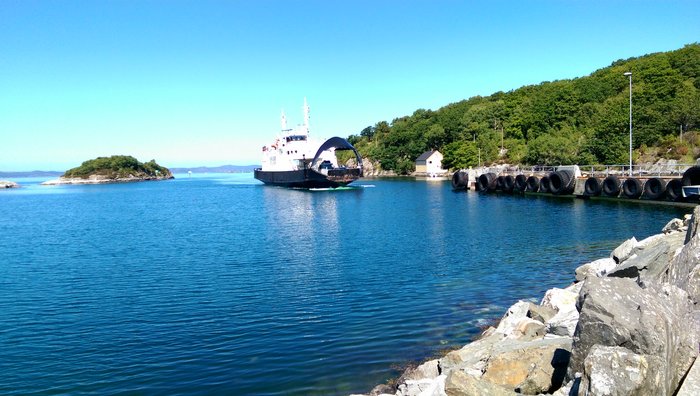 There were no major climbs today, but there was a fair amount of up and down and the now familiar landscape (although more rocky and less mountainous).

There was another two crossings, but these were done by suspension bridges (each a kilometer long). 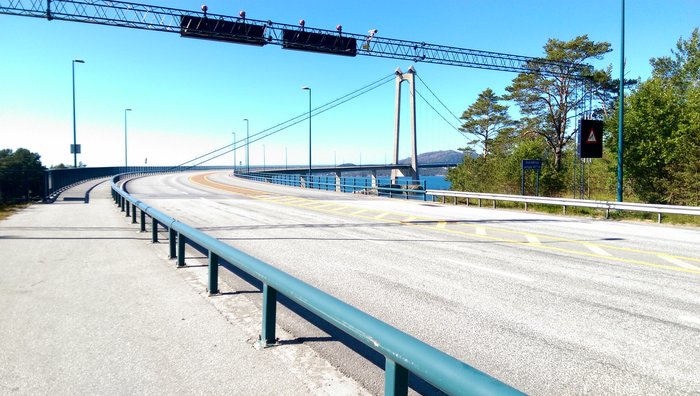 I saw a fair amount of people painting their characteristic Norwegian white-planked houses, and noticed the pealing paint on a number of others, I guess that this is a yearly chore. Apparently the houses are made of wood because of the weather and it even costs more to insure a brick house.

In the evening while I was sitting by my solitary tent in the campsite a man approached me, he introduced himself as William and said that he was cycling north. He was from the US but lived in Germany and was on a shorter trip than me having driven up to Hirtshals and taking the ferry with his bike, he was heading to the city of Bergen (the next stop for me, I may have heard him incorrectly) where he will get the ferry back to Hirtshals in order that he can go back to work on Monday.

He informed me that the terrain will get significantly steeper after Bergen, with some mountains being 700 - 800m. This corresponded with information I had earlier from a young woman from Bodensee (Germany) who is on holiday here with her family. She said that I would see glaciers as I headed north.