Woke up in the campsite after a pretty good nights sleep, made the usual breakfast - the coffee is very important. I don’t feel human without it.

I packed my stuff up, filled my water bottles. I saw William (the American cyclist I spoke to the night before) preparing to leave and I went to pay. “Do you want a coffee?” asked the campsite manager, I thought about it, and refused “I just brushed my teeth, it wouldn’t taste so good”, I waited around for a few minutes checking my route. I half-expected to cycle to the ferry crossing to Bergen with William, who was going to an adjacent island instead of Bergen, but after a few minutes I left and went on my own.

It was spitting with rain when I left, and most of the morning it spat and drizzled, but didn’t quite turn into rain. I didn’t listen to any music today or do any lessons. It was mostly quiet and I was happy in my own thoughts.

I made it to the ferry crossing to Bergen and Husavik at around lunch time. It was a bigger affair than the previous crossing and there was a toll booth, but also a cycle way which I followed without paying - in the waiting area I asked some waiting passengers if it’s expected to pay on the ferry, and they said it was.

Outside of the waiting area I saw a touring bicycle leaning against a building on it’s own. I didn’t get a good look at William’s bike, but I think from the description he gave me, this was it. I didn’t seem him before I boarded the ferry to Bergen however.

The ferry crossing cost around €7.50 and didn’t take very long. 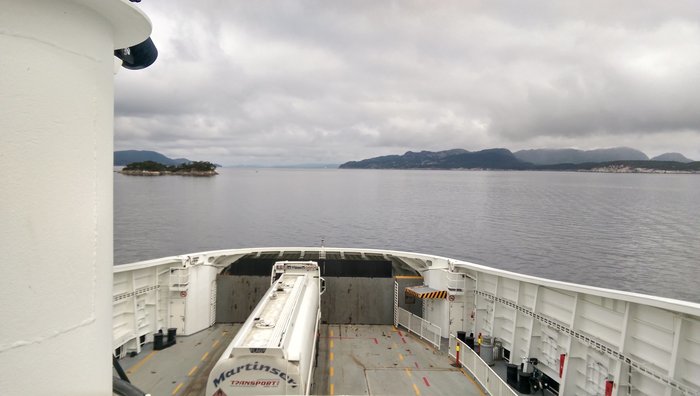 After leaving the ferry I was on the look out for a place to eat lunch (a bench) but after an hour I just decided to stop at the next convenient rock. I had a couple of baps with Laughing Cow cheese triangles and exotic fruit mix, then thought about where I would stay tonight.

Bergen is under my target 100km for the day, but looking past Bergen, I couldn’t see a campsite within a reasonable distance, so it would make sense to stay in a hostel in the city. There was a YMCA hostel, I emailed them as they didn’t have the country code for their telephone number, another hostel did, so I phoned them and they said they had space “Can I make a reservation?” “Yeah, sure … well, here’s the thing - it’s my first day here and I don’t know how to make a booking, but we have 4 beds free so if you just turn up it will be fine”. 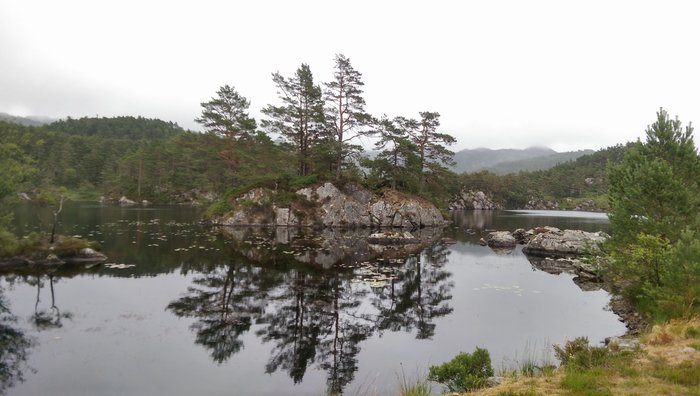 The route to Bergen took me over a 260m mountain-hill. Not high enough to be a mountain, but you wouldn’t know the difference when riding up it. From there it was mostly a descent through the suburbs of Bergen.

“Berg” means “mountain” appropriately, although the city was originally called Bjørgvin . The cycle path was amazing, as soon as I got into the city limits there were frequent cyclists on racing cycles and mountain bikes (of all ages), and lots of runners too. The cycle path threaded over and under roads and I only remember hitting a single traffic light while going to the city center.

The suburbs seem to have grown over the mountains, with roads bridging streams and houses built upon rocks and tunnels everywhere.

I soon found my way to the hostel and was welcomed. It seems to be a very nice hostel run by travellers. In the common room them is a guitar and piano (as I walked in there was a young guy playing guitar and singing lazily). Tonight is waffle night apparently. Smoking and Alcohol are forbidden.

Bergen is also a good place for hiking, it’s known as the “City of Seven Mountains” and some, if not all, are accessible from the center, so I am thinking about staying another night and running up one.