I got out of bed at the hostel at around 7am and went to the kitchen to make some coffee, I decided not to have breakfast as I wanted to leave early, so I just used some of my Muesli and one of the hostel people put the coffee on.

I sat down and was joined by Katrina from the “team” and then by a new Spanish arrival who was studying in Trondheim and had gotten the plane to Bergen for the weekend.

I had decided to go east and head directly to Oslo. The cycle path ended shortly after turning west, and resumed about 15km east. Zooming in I could see there was a train line going that way, so it would seem that this section of road was not suitable for bikes (probably a long tunnel) and I would need to get the train.

I left the hostel a bit later than anticipated and decided to head to the Tourist Information center to get some more information, but when I got there it was up a flight of stairs, and I didn’t want to leave my bike out-of-sight, so I just left.

Up until a certain point I could still change my mind about turning east, and that point was about 15km from the hostel. As I cycled towards it I knew I was deferring my final decision, and when I got there I stopped and debated with myself for 10 minutes.

My original plan was to cycle to Trondheim. I was now running out of time, so it would be impossible to cycle to Trondheim and back and still be back at work on the date required. But there were other options, I could get the night train from Trondheim to Oslo, but even with that I would have only 6 or so days to cycle down Sweden - but then of I assume I could get the train again, or a bus. 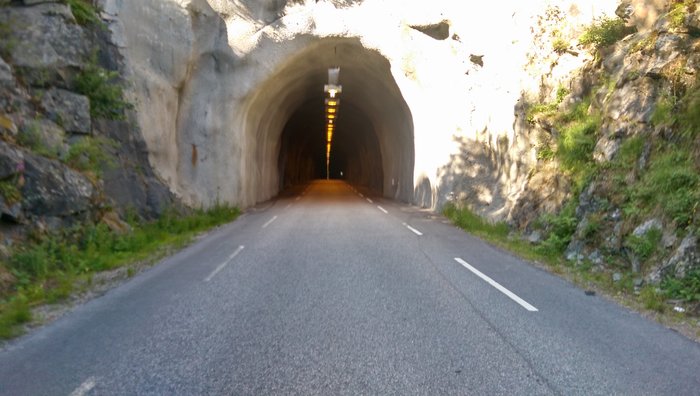 I imagined the negativity I would express when people asked me about my trip “Yeah, I had meant to cycle to Trondheim, but I ran out of time, so I came back”. If I turned east, I would have effectively failed my mission! While getting the train from Trondheim was always a contingency.

I continued north. I have money to get back, and I may never do this again.

In the hostel I spoke to an English guy who had just cycled from Trondheim, and it took him 10 days, doing around 70k a day, so I could probably do it in a week.

The route today took me across some suspension bridges and I got a ferry from Liervag to Slovag, which cost 40kr and took around 20 minutes or less. I napped on the ferry. 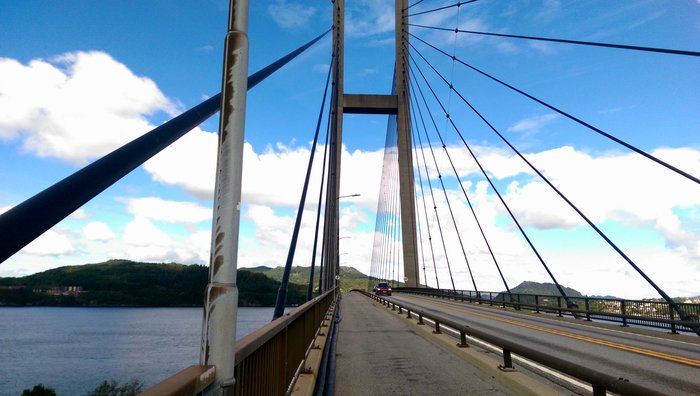 There is not an abundance of campsites on this route, and I had a choice between cycling 140km and having another ferry crossing (which could potentially involve an hour wait) or another campsite which was on average 15km off-route, but was in total a slightly shorter distance to ride today, and a sure-thing.

I already had 7.5 hours and 100 under my belt at this point, and I turned off the cycle path to the campsite. The new route went east around a lake. As I rode down it I was impressed by the large mountains rising up around the lake. After 10km I got to the village of Ausgulen. The mountains closed in around it, and the road went into the mountains. On the other side was the fjord. 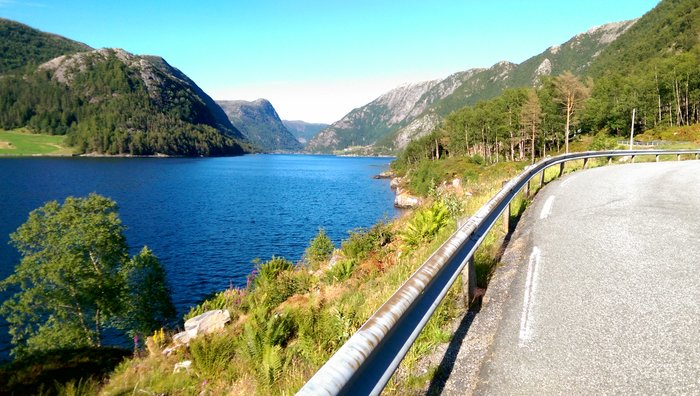 I didn’t realise it was a mountain pass until I rode up the first section and looked up - I could a road 100m above me, and I hoped it wasn’t my road, but it was. So I climbed and turned and climbed and turned. 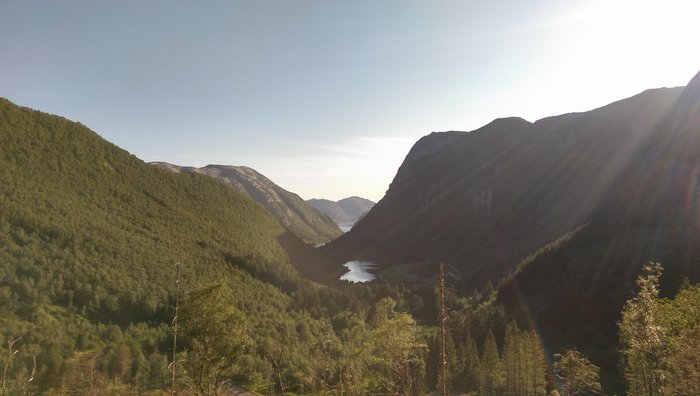 Looking back from the pass

The view was magnificent looking back down to the lake, the top of the pass was sooner than I anticipated, and I could see the water of the fjord and I rode straight down to it, and found my way to this campsite.

As I erected my tent I heard the dreaded snap! again, the tent pole had broken. It had broken in a different place. I made an exclamation and my neighbor came over to see what the matter was. I said “My tent pole has broken”, he offered me some duck-tape, but then reconsidering said “wait a minute”, I knew then what he had in mind and he rummaged through his tent case and pulled out an emergency pole repair segment I was hoping for (the same thing I had used to fix my pole the first time). 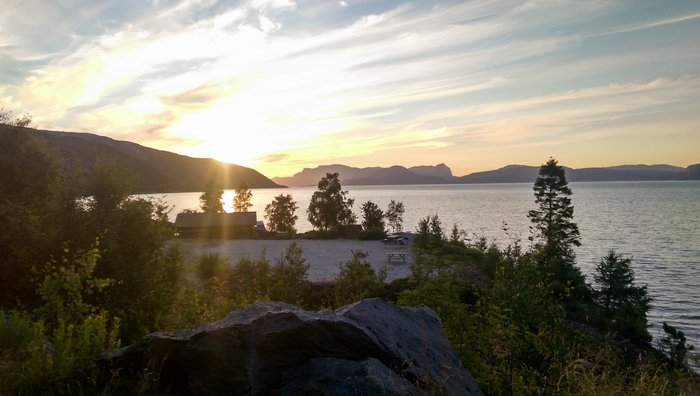 View from the campsite

I was very lucky to have this man camping next to me - I’m not sure I could have sufficiently repaired the tent to make it useful otherwise.

I am now sitting in the campsite kitchen, having just cooked (they have hotplates in here, so I can save my camping gas). I am charging my phone from my laptop (saving my portable power-pack) and would like to be using their internet too - but it would seem to require payment, so I may need to use some of my mobile data allowance on my phone to upload this blog post.

Unfortunately I burnt through 90% of it in the first week, so now I only have around 100MB left and then nothing until I get back to Germany. So have to ration it very carefully. Hence, no photos today, will add them retrospectively.