This morning I woke with a stomach ache and there was lots of groaning as I packed up my damp tent and filled my water bottles and tenderly made my way back to the road.

The sky was and is overcast and has been so all day, but it hasn’t been raining.

The cycle route went indirectly around the coast, but there was another road cutting straight across the land which saved around 15k. I wanted to make it as far as possible today. There is a stretch to Trondheim of around 70k without any campsites, so I wanted to get to the last one before that.

The road took me on to Norway’s Engineering feat of the century - the Atlantic Ocean Road. It took 6 years to build and was partially financed by tolls until 1999 when the tolls were removed. 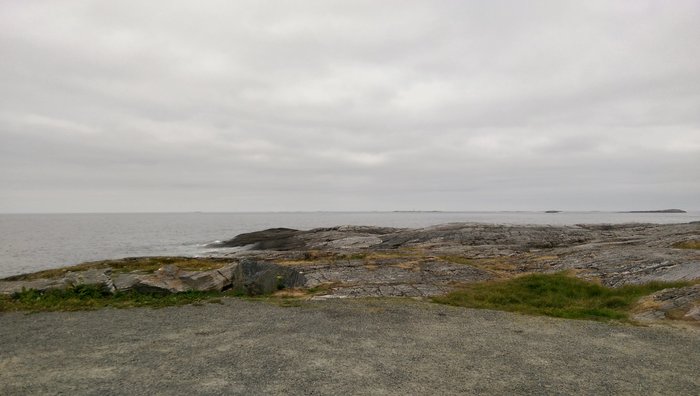 View from the Atlantic Road

This was the first time I really smelt the salty sea air as I rode over the scattered mini-islands and bridges. There was lots of tourist traffic, and camper vans, and people walking about on purpose-made bridges, clambering on the rocks and looking at the sea.

I stopped for a coffee, my first coffee in Norway, it cost only 20kr (~€2) and was filter coffee served in a paper cup. It tasted good though and made me feel better.

After this I was riding to the end of the cycle path - or rather to the Kristiansund tunnel through which I was required either to take a taxi or get the bus.

As I rode up there was a cycle-route sign which provided me with this information, it didn’t say how often the buses ran though, it only gave me a website, which I couldn’t check, because I have no mobile data. Fortunately there was a timetable across the way, unfortunately it had been battered by the elements and was mostly illegible, but I could make out the possibility that the bus ran maybe every 15 minutes.

I waited, and very soon a bus appeared and pulled in. The driver got out and put my baggage in the hold and I put my bike on the bus (there was a wheelchair space). The bus could have carried 60 people, but there was only one other passenger on this ride. It cost around €7. The tunnel went underground and covered around 8km, when we exited the tunnel the driver continued to the bus station in Kristiansund where I got out.

I had previously this day gone into an Intersport shop to try and find some Camping Gaz, they didn’t have any, but they suggested I try in Kristiansund, so this was my first priority.

I first tried a hardware store, and they referred me to a maritime store. I asked in English if they had any Camping Gaz, and they did. I paid (€14) and said “Mange tak” (many thanks), and in return I got a “Har det bra” (goodbye): my first successful Norwegian language transaction! Later in the day I also managed to understand the amount I had to pay at a supermarket without reverting to English.

I didn’t stay long in Kirstiansund, I made my exit, riding through a section of the harbour which seemed like a working ship-building museum. 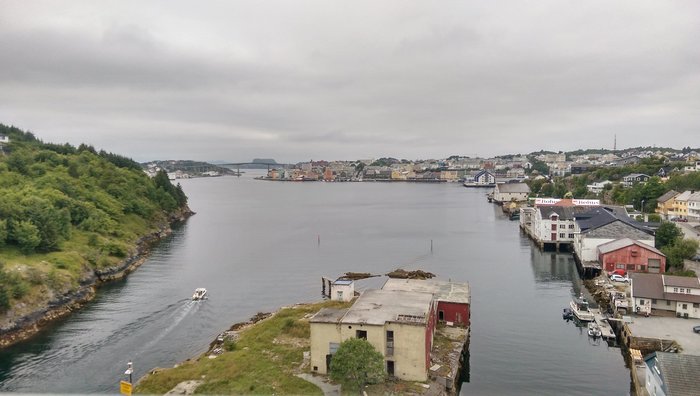 View of Kristiansund from a bridge

I had now done about 75k, it was 15:00 and I hadn’t eaten anything, and didn’t feel particularly tired or hungry and I was soon on the Tømmervåg ferry (cost €4). On the ferry I made myself a sandwich while the other passengers helped them selves expensive self-service food. 25 minutes later I rolled off the ferry. 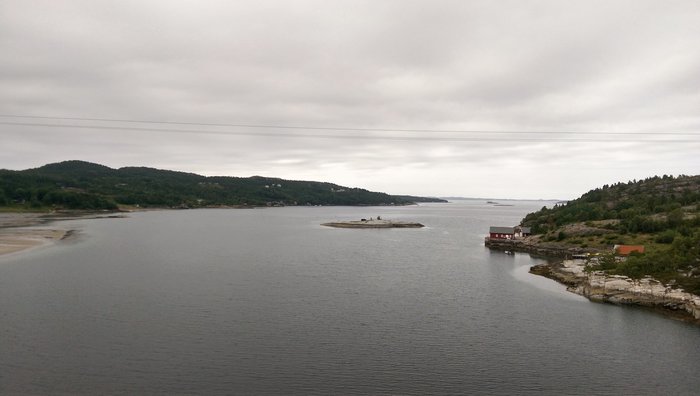 View from a bridge, not on Kristiansund

This was the last ferry before Trondheim, and very probably the last ferry in Norway on this trip. I’m not very sad - the ferries are a pain, and while most of them have been running regularly, I have had issues with some that required me to wait for so many hours, and of course they cost money.

On the final stretch it was very quiet - other than the periodic batch of traffic from the ferry. A racing cyclist pulled up next to me, he was an older man (probably retired) and we had a chat for around 10 to 15 minutes, the normal stuff, where I’m from, where I’m going, where I’m eventually going, etc. He recommended the campsite that I’m staying at now. 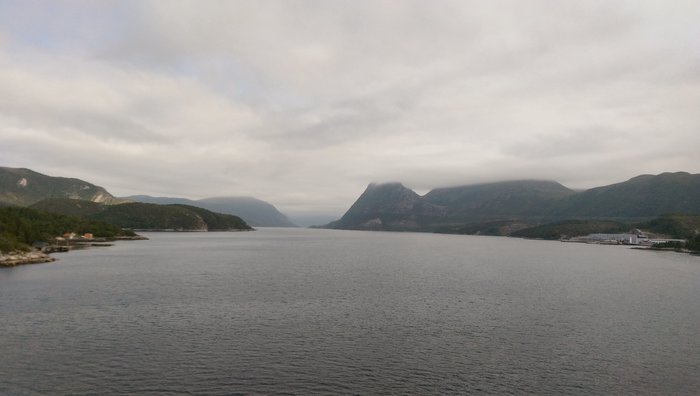 This campsite showed up on my map as “INTERNET-ACCESS: FEE CHARGED”. Which doesn’t make it sound overalls appealing, but there was no other option (there was another campsite, but it was on an island which required another ferry trip).

The Wifi is however, is very free indeed (no password required). They also have a kitchen (and the cooker doesn’t cost anything). Today I bought some dried peas, and I’m trying to cook a mainly pea soup, the peas have been cooking for an hour now, and still not mushy, don’t think they are the right kind (think I should have gotten split-peas), but hopefully they will be soft enough to be edible.

My final destination, Trondheim, is still around 170km away, which is certainly doable in a day, but it wouldn’t be a pleasant day at all. So I will stay at another campsite tomorrow, and hopefully book a hostel in Trondheim, or buy a train ticket and get the night train directly. 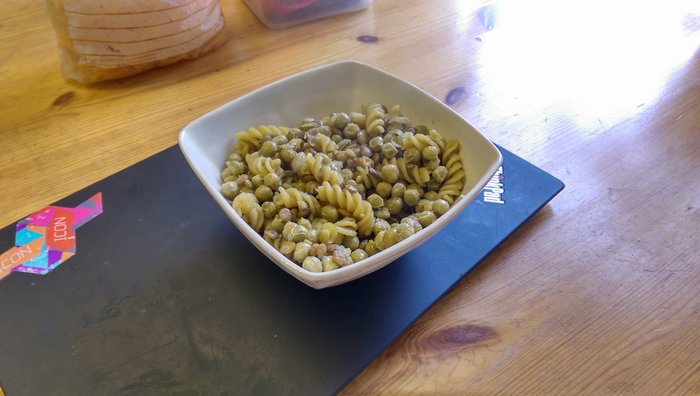 This was meant to be pea-soup