It appears to be Friday the 13th. Today was a hard slog, most of the route was hilly and there were no “natural” rests along the way - no ferries or tunnels or places of note. I stopped for lunch at the top of a long climb. 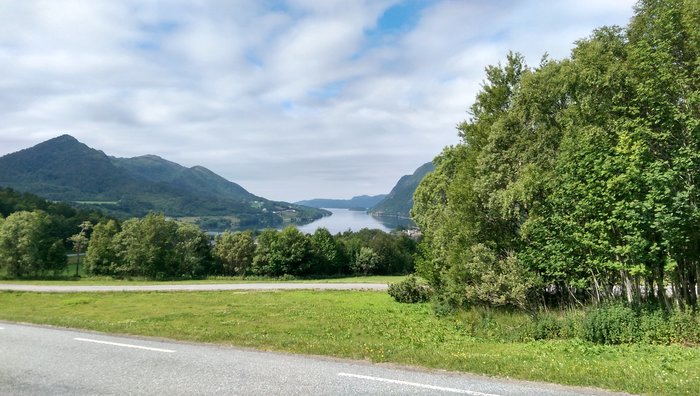 It was cold again last night and hard to get to sleep, I woke up multiple times and ended up putting my trousers on in the sleeping bag and pulling my arms inside of my t-shirt to achieve a level of comfort. I think next time I will get a warmer sleeping bag.

I am now about 60km from potentially my last stop - Trondheim. I have already booked the hostel, or at least I hope I have. I emailed them this morning, they replied saying that they had beds available, and I replied saying that I would take one, then left. I have no mobile internet, but later in the afternoon I was in a supermarket and there was WiFi. I checked my emails and they said that I should receive a booking confirmation. I didn’t receive a booking confirmation, so I emailed them back to confirm. However, as of now I still have no internet, so there is a slight possibility that it is not booked.

In the supermarket (arriving after my lunch) I got a pastry and two bread rolls. The bread rolls were advertised as “2 for 20kr”. That made me think, oh hey, that’s a good deal. Only after leaving the supermarket did I reflect that I just paid about €2 for 2 bread rolls which would have cost at most 70 cents in Germany. I neglected to get some other supplies - namely Onions and Lentils for my soup tonight, so will have to make do with what I have left.

When I stopped for lunch, as previously mentioned, it was at the top of a long climb. There was a picnic area (I was hoping there would be) and already two groups of people eating there, one group was leaving, and as I sat down on a vacant table a motorcyclist talked to me. 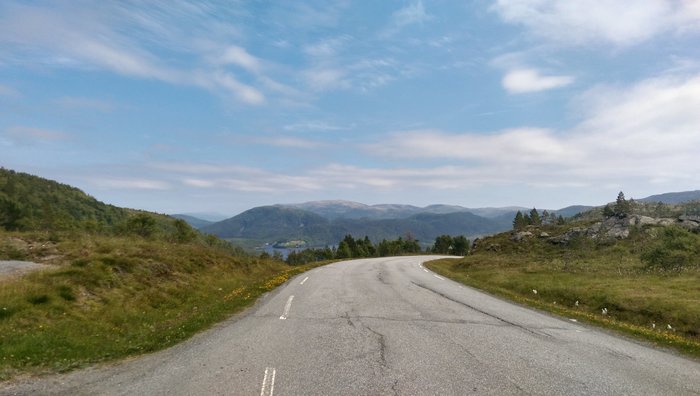 After Lunch View from the Top

He was from Heidelberg in Germany, and was impressed with my journey. He had actually done my route on motorcycle, getting the ferry from Hirtshals and riding up the coast to Trondheim, and he will now ride back down to Oslo. I didn’t ask how long it had taken him, but it’s taken me two weeks. We spoke mainly in German, and it was one of those cases where my German was only a bit better than his English.

I passed another cycle tourer when riding down a hill, she was a young woman riding alone - the second I’ve seen so far. Most of the cycle-tourers I’ve seen or met have been cycling in pairs, I can only recall seeing two solo male tourers on the road (excluding the tourer I met in the hostel in Bergen) 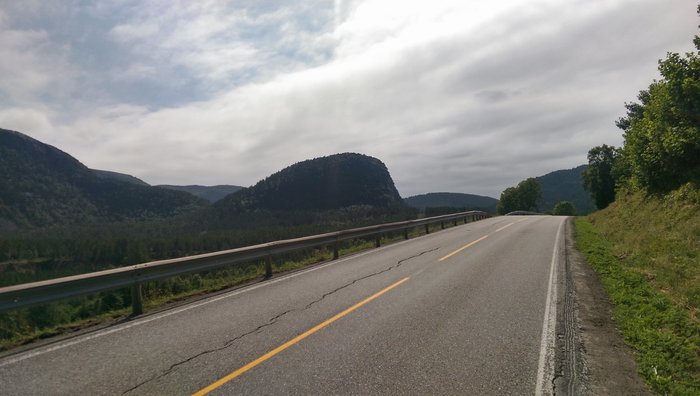 At the campsite I was lucky to have a power outlet by my tent, and Wifi access. I was able to fully charge my power-pack and phone, and this morning I downloaded some audio-books. “Sapiens” (a history of human kind) “The Rise and Fall of the Third Reich” (which was recommended) and Howards Zinn’s “A Peoples History of the United States”.

I listened to over four hours of Zinn today. It’s a book that is controversial with the political right in America, as it presents history from the point of view of the subjected - the native Americans, the indentured labourers, the black slaves. And really presents the dark side of American history. 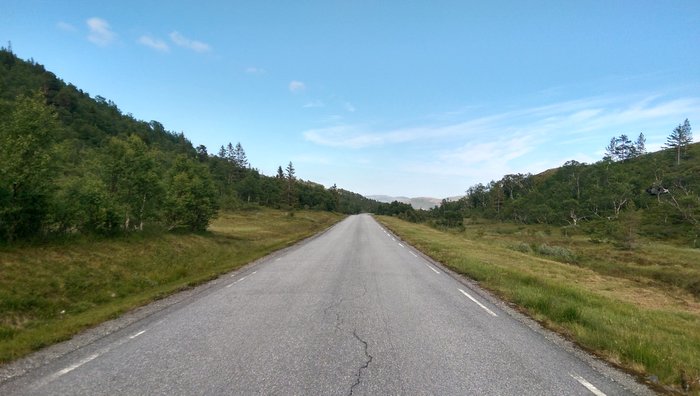 I was glad to get to the campsite, the last part of the journey raised me to an altitude of almost 500m - the highest so far that I’m aware of. The cycle-tourer in Bergen gave me the impression that some passes were 1000s of meters, but he may have been referring to the mountains rather than the passes. None of the climbs have compared to the big climbs in the Pyrenees or the Alps. 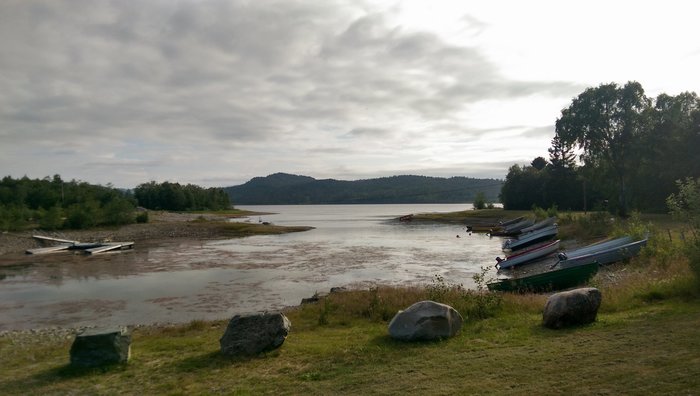 View from the Campsite

Feeling quite worn out, I think I’m going to make something to eat.