When the girl came around to collect the money for camping, it was actually very cheap, only 60kr (about €6) - cheapest so far, almost by half.

It was quiet enough and I was initially camping on the tent pitch on my own, but later joined by two other tents, but they were at a good distance from each-other and not noisy in any case. There was a small party happening in one of the caravans on the other side of the site making noise until around 12, inducing me to put my ear-plugs in as I read three chapters of “Memoirs of a Geisha”. Thankfully the noise stopped at around eleven and I slept well until the morning.

This morning I used the last both of my coffee and my jam. The coffee has lasted me all this time from Berlin, and I have been drinking a cup a day (except in the youth hostels where I used their coffee). The Jam also has lasted since Germany.

I was only at most 70km from Trondheim, so I was in no hurry to leave the campsite, but ended up leaving at around nine anyway - if there was a chair and table where I could sit down and work, I might have stayed, but working in the tent, with my legs folded and the laptop resting on one of my panniers, is not super-comfortable, and I always experience stretching pains when I stand-up after sitting cross-legged after a certain duration.

I left the campsite cycling the wrong way but soon realised my error and turned back. I was listening to the Manic Street Preachers (Gold Against the Soul), but then changed to another audio-book. Yesterday I did 4 chapters of Howard Zinn, today I did three chapters of Sapiens. Sapiens is also a history, but a pre-history history. So far telling the tale of the different genus of “homo” of which we, “sapiens” are only one species of many which used to exist. Lots of profound ideas.

I stopped at a supermarket (“Coop”). As I stopped I didn’t really know why I had stopped, it has just become a routine to stop at a supermarket once a day. Once inside I just picked up a pastry and two rolls of bread, and also was able to use the supermarket guest WiFi. I payed in cash, but debated buying more stuff and paying with card.

I only have 150kr left in cash now, and about 4 days ago I realised that every time I drew cash from the cash machine, it charged me €6. I had always tried to take the minimum amount of cash plausible from the machine as I don’t want to leave the country with too much remaining. But if I’m only taking out €40, then €6 is a very high surcharge (it seems to be a fixed fee). Using the card “only” costs around 69 cents. But that makes no sense when buying a few bread rolls and a cake (€3.75).

The cycle route into Trondheim was pretty quiet, and it was cycle paths all the way to the center. It is the third most populous city in Norway, but has a low population of 193,000 compared to more populated countries.

When I got to the hostel I parked my bike outside and went in, the reception was closed but a girl said “hello” and said “check-in is at 15:00” (it was around 13:00) but she proceeded to open up the reception anyway, and then found my booking and let me know that the room was already made up and there was another person in it (otherwise I could put my bike in the room) and that I could check-in right-away.

This old lady seems to be a resident, or part of the staff, I’m not sure. But she stalks around the place checking that everything is in it’s right place and correcting people continuously so that you are likely to make a mess just out of spite. But I’m sure she means well. But it’s a very different atmosphere from Bergen, but also the facilities are excellent - the bunk beds are very solid and the facility is modern, and there is a large cupboard of free food. It cost around €34 for a single bed in a four bed dormitory. 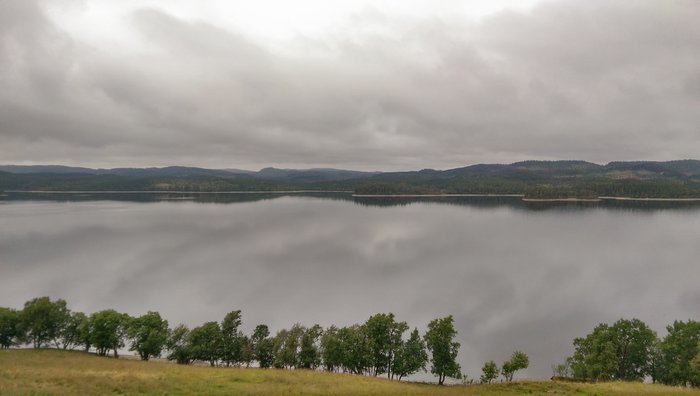 For dinner I have just finished a pizza. It has been 8 days since my last pizza in Bergen, and it;s nice to have a change from soup.

This evening I need to research my options for getting back to Berlin. This is potentially, effectively, my last bicycle destination. My first plan is to get the train to Oslo, and then the train to the south of Sweden in order to get the ferry to Germany, where I will again get the train. But maybe there are other options, and maybe I will need to do more cycling before I see Berlin again.