The middle aged man on the bunk oppsite to me got out of bed at around 5am, I woke up and dozed intermitently before getting out of bed at around 7am and packing my stuff up. I hoped that the hostel had a kitchen where I could make my breakfast. I went down with my bags and asked at reception “Do you have a kitchen?” “Only the ones in the rooms”. And I thought: fine, I’ll go back to the dormitory where everybody is sleeping and make a full-english then. I’m always a bit puzzled when hostels put equipment in a dormitory which can only negatively effect it’s purpose: for people to sleep. TVs and bathrooms are bad enough (people pulling the flush or having a shower at 3am) but I’ve never seen a kitchen before.

With the kitchen not being an option, I sat down in the reception and pulled out some of my camping gear and poured the last of my museli into the camping pot and added water and jam. I thought I would bolster myself with a last shop in Norway on the way out of Oslo. I was actually pretty hungry - as I had only had a sandwich for dinner the previous night.

I packed up my stuff and walked around with my bags to the hotel next door where my bike was stored. Loaded it up and walked out onto the street and took check of myself: Both my water bottles were half full, I hadn’t been to the toilet and I was hungry. Not the best way to set out, but I set out anyway and cycled south, trying to cut into the center of Oslo to have a look about, but didn’t stay long or see anything of particular interest.

The sun was shining and the sky was clear, and it was not cold at all. I headed to the town of Ski. There is a cycle route to Gothenburg (as found on the Eurovelo website and on my phone) but it is not at all direct, and looked very hard to follow. I started by following the route, but was always ready to hop onto the main road to bypass lengthly, cycle-friendly, detours.

The terrain was refreshingly flat for most of the day.

First stop was a supermarket. I was looking for green-lentils. Actually, I have been looking for green lentils since the second week in Norway. I had some from Denmark which lasted me a good while, but perculiarly I cannot find any in Norway. Well, they have lentils, but they have no dried lentils of any color. This is a shame as that’s basically my protien.

So, I got only another can of baked beans, some bread, a pastry, and, possibly a mistake, but a bar of choclate.

This was my first bar of chocolate on this tour. I think on my first tour I ate two or three big bars a day and put on weight. Chocolate is (for me at least) highly addictive. It is also a good source of energy, as I was feeling depleted I decided to indulge myself with a €2.50 (the cheapest) bar of chocolate. I think it helped, but as I was cycling my mind kept thinking of the bar of chocolate and how I should stop and eat some. I managed to save enough during the day to have only just finished the last two peices while writing this blog post. But I will continue to avoid it.

The same goes for cookies (or any high-sugar snacks) - they taste nice and I can fool myself into thinking I need it, but I will easily demolish a half pack in a single sitting even if I told myself I would only take one. So better to abstain. Instead I will by single-serving pastries to get my sugar hit.

The previous evenining, while I was leading the Bavarian tandem couple to the hotel, my chain slipped. It wasn’t the first time on this trip, but it was a sign of things to come today.

The slipping chain has a singular effect on me. Everytime it happens I have a loud bout of tourrets. It is very discouraging, and sometimes dangerous, especially when cycling up a hill and your putting your full force into the pedal, when it slips the pedal flies forward and it’s possible to lose your balance, or for the pedal to go 180 degrees and the opposite pedal to hit your leg. It happens randomly when you least expect it and means that you have to approach steep inclines in a very cautious way.

The chain continued slipping today, until the gear stopped working altogether and the chain rested on the bottom rung and wouldn’t budge.

A quick investigation revealed that the cable had snapped and I pulled the frailed end out of the gear changer on the handle bar.

This happened two years ago in Slovakia, I think on the other side. Then, I had no replacement cable and it was a Sunday had to tie the cable to the frame in order to keep the deraileuer in a single position until the following day.

Fortunately I learnt from that and made sure to buy an extra cable. That extra cable has been sitting at the bottom of my food-bag for two years, it was rusty but serviceable.

I spent some time figuring out how to get the cable attached to the gear-changer. In the end I had to partially dismantle it. There is a “meter” showing which gear you are in, it was on the bottom part of the changer and hooks into the mechanism on the upper part. So when I dismantled it, it was very hard to get it back together again, and consequently it doesn’t work anymore, but not a great loss.

The cable was now replaced, but I didn’t bother tuning the gears, which in hindsight would have been energy well invested, but I left thinking I could tune them if necessary on my lunch stop. But the gears were completely awful, and I had to apply pressure to the changers some of the time to stop them slipping.

About this time I passed a group of three young cyclists, two guys and a girl. These three were to play a repeated part in the days cycling, as, despite me stopping mulitple times to fix my bike and have lunch we kept passing one another. It seems we had the same destination. Around the fourth time there were smiles as they saw me again and I smiled back, the last time I passed them they were all three sitting in the shade of a cabin, when they looked up and saw me they all gave me a big wave and I waved back. I then carried on, but realised that I had taken the wrong direction, so passed them once more for the last time.

After making my first road-side coffee (I had no coffee in the morning, so I pulled out my camping stove in a lay-by) I started to tune my gears. To tune the gears I turned the whole bike upside down, it probably took around 15 minutes, and seemed much better afterwards, at least for an hour or so. During this hour I was quite happy, much facilitated by the flat terrain and my new music.

My MP3 player has around 15 albums on it, but I have listened to them too many times, but then I remembered seeing a micro-sd card in my luggage and wondered what was on it. I wasn’t sure exactly where it was, but searched the possible locations and eventually found the finger-nail sized memory card. It was at least two years since it had last been used and initially my MP3 player wouldn’t accept it, but after some vigorous rubbing and blowing it registered and I found a little treasure-trove of around 20 albums and rode off listening to Jefferson Airplane and then The Pogues.

But this period of contentness was interuptted when my gears started making a abbrasive noise and I stopped (I had actually just pulled in beind the three young cyclists on my route). I looked at the problem. The front deraileuer was, on the highest rung, was rubbing bother the back and front of the chain. I didn’t know how this was possible, or what could have changed to cause this strange state. This made me quite sad as the gears were working so well previously. 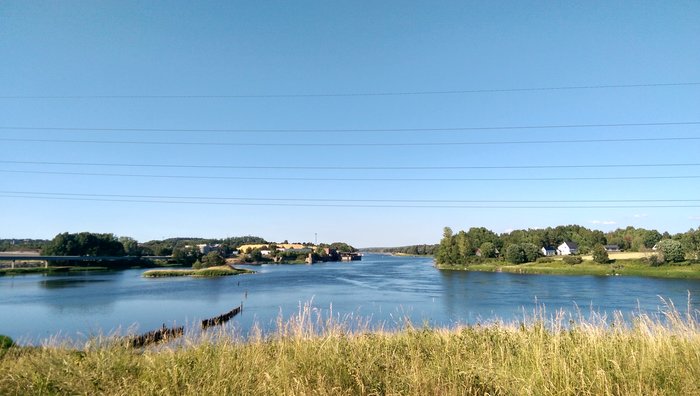 I didn’t know what had happened, and the only way I could see to fix it was to rotate the whole deraileur to a different angle so that the chain passed through it silently.

The chain continues to slip now and then - I assume its related to the tuning, but it may well be that the chainset is worn down (it’s seen almost 10,000km I guess) and the two problems are just coinciding.

Today I made my target, and am just 10km away from the Swedish border, from whence the distance to Gothenburg is around 200 - 230km depending on the route. Looking forward to more flat terrain and maybe some marginally cheaper prices in Sweden (maybe I can even afford a can of beer).

I have 150kr remaining, which I was saving in case the campsite required cash, but they only took card (and it cost 165kr in anycase). So will try and stock-up in a supermarket before Sweden.