I’m in a campsite in Trelleborg, the town on the southern coast of Sweden and the ferry port. I just showered and hand-washed my underwear and shirt which are now hanging out to dry.

I got out of bed a later today, both because I had relatively late night and because I was in no hurry, I only had 15km to Gothenburg and then it was a train and another short ride to Trelleborg. So I had my tent packed up by around 9:30am.

My neighbours on the tightly packed campsite were a cycling family from Germany, and an old couple who were touring in their SUV. They had a tent mounted on the roof rack which opened out and provided shelter by the side of the car.

The man from the roof-tent SUV approached me and started talking to be in German, they were heading to the Atlantic Road on the North coast of Norway west of Trondheim (which I cycled down). We talked about my journey back to Berlin and he mentioned that there were other options for the Ferry, notably that there was a ferry to Rostock.

While I was talking I found myself slipping into French, “Ja, ja mais..” “Ja das ist so, donc errr..”. I am reasonably fluent in French, less so in German, confident in neither. But whenever I speak in another language I always seem to unconsciously fill in the gaps with French.

I checked this on the Wifi before leaving the campsite, and there was a sailing at around 15:30. I still hadn’t decided on a plan. The trains from both Rostock and Sassnitz to Berlin stopped at around 22:00, so if I had taken a later ferry I would have had to have stayed in a hotel, or found a campsite that would admit me at that time. Hotels in Sassnitz are very expensive (€100+ a night), Rostock would probably have been cheaper but there was also a campsite in Trelleborg about 2km from the ferry port, so I could also stay the night and get the early ferry, which would probably be the cheapest option. So knowing I had some options, I hit the road. 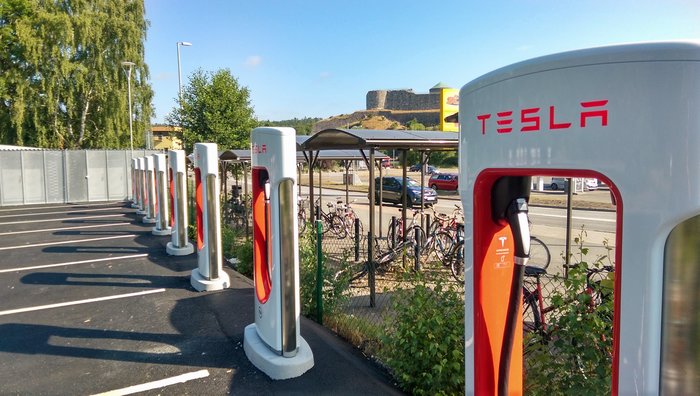 Looking back I realised there was a large ruined castle opposite the campsite.

It was plain sailing to Gothenburg, although slightly longer than I expected, it was around 20k in total. Riding into the city I passed though lots of industrial areas and construction sites, there was a cycle path all of the way, although sometimes it was diverted due to the construction works. 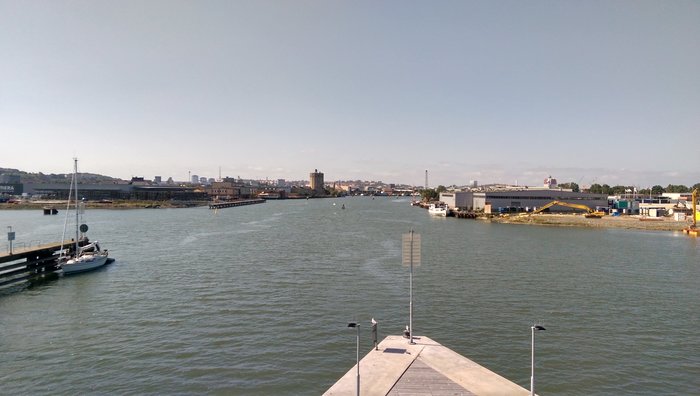 Crossing the Bridge in Gothenburg

I didn’t stick around and headed straight to the central train station and got a ticket to Malmo (pronounced “Mal-ma”) with the bike. The ticket for me cost around €60, and the bike another €28 (the same price as a child). When I bought the ticket the girl behind the counter said that the train left in 10 minutes, which made me think I might miss it, but the ticket was valid for all trains, so there was no absolute pressure.

As it turned out the train was about a 1 minute walk away and was already at the station. I pulled my bike onto the first carriage, as there were folding seats and space for a bike, but I noticed there were no bicycle signs, I asked a passenger if he spoke English, and then if he knew if this was the correct place for a bicycle “I have no idea” he said apologetically, hmm. I stood in open doorway and scanned for a conductor, then noticed a layout plan for the train in a frame on the wall, it clearly indicated that cycles go in the middle carriage, so I pulled the bike out and walked further down the platform and saw a carriage very clearly marked with a bicycle logo.

I pulled my bike inside and there were 3 other bikes already there and a push-chair. I pulled my bike inside and sat down on one of a row of folding seats opposite the bicycles. There was a woman and her toddler next to me. As we pulled away the toddler came up and leaned on my arm, and that embraced it “Hello” I said. The woman smiled and pulled him away. A few minutes later he came up again and hugged my leg and of course everybody laughed at how sweet it was and the woman pulled had to separate him from me.

I was quite tired and dozed off on the train, I read for a little while, and tried to do some work on my laptop, but was unable to do much as I required the internet.

It was around 2 hours until we arrived in Malmo. Walking out of the train station I was greeted by a lively aesthetic square, as I cycled thorugh the town I reflected on how nice the city was, but I made my way out and rode straight to Trelleborg.

My optimistic first estimate of the distance was 10, I think I estimated this a week ago and never revised it, but it was more like 30km. Fortunately there was a strong tail-wind and I made fast progress, at one point nearly hitting 40kmph on the flat, a speed that would not impress a racing cyclist, but on a touring bicycle it’s pretty fast.

As I cycled towards the ferry port I passed two youths, one of which spat as I cycled past and then I could here them jeering behind me. It might have been my imagination, but it made me angry. I rode on. This is the second time I’ve been provoked, the first time was a couple of days ago when a car beeped at me for no other reason than that I was cycling on the road in a shopping center car park, after passing me he accelerated his cheap pseudo-sports car in an aggressive way. Prior to this I had not had any cars beep at me (except a single lorry and that was justifiable).

I found the ferry port, and went inside and asked about “boats to Germany”. There were sailings today, but they were full. Tomorrow there were sailings to Sassnirz and Rostock at 07:30 and 07:45 respectively. I booked the 07:45 to Rostock and decided to make my way to the campsite.

On the way I found a cycle shop. The clerk was in the middle of selling a new pair of bicycles to an older couple and I had to wait about 10 minutes, but eventually I got myself a working pump and a new inner tube from the affable man. I’m not planning to cycle any more long distances before getting back to Berlin, so probably won’t need them, but there is always a chance I will end up cycling some or all of the way to Berlin if I can’t get a train ticket tomorrow. It’s not over until it’s over!

The campsite is a pretty large one, and at the reception I payed the highest price so far, I think it translated to around €20. The shower and kitchen are included in the price, but there is no Wifi at all. This is annoying, as I am now unable to (conveniently) further plan for tomorrow. 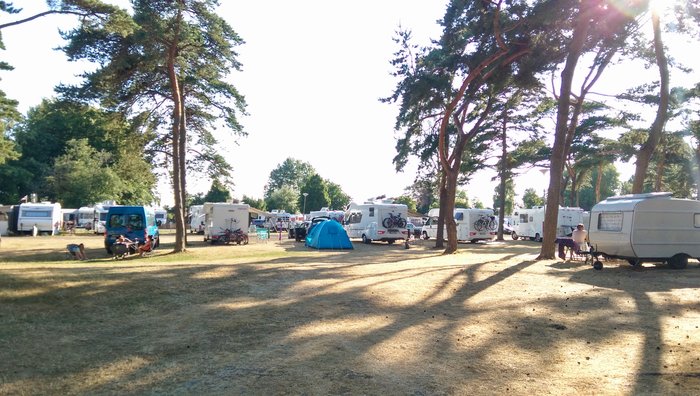 So I have an early start, I plan to be at the ferry port at around 6am, so want to get up at around 5am. Will probably get into Rostock at around 11am - and then the plan is to get the train to Berlin - but bicycle spaces are limited, so will just play it by ear.

At the very least, I will be glad to be in Germany again, and have use of my mobile internet, be able to withdraw cash and use my card without surcharges and return to my normal economy.

Clothes Drying on my Bike