In two weeks time I’m going to cycle from Berlin to Tallinn.

As with my tour to Norway last year, this is a limited 1 month trip, the plan is to set off on July 1st, and cycle through Poland, maybe Belarus , Lithuania, Latvia, the destination Tallinn, then get the ferry to Helsinki, Finland in order to get the Ferry back to Rostock, then the train back to Germany and Berlin.

According to this plan I’ll have visited 7 capitals including Berlin. Previously I have cycled most of the rest of Europe west of Russia, with the exception of Macedonia, so this will be the north eastern tour. Unfortunately I certainly won’t be able to visit the Ukraine, and Belarus depends.

Original plan was to cycle directly east from Berlin, through the center of Poland, through Warsaw, then to Minsk, before turning back up to Vilnius. When I shared this plan with Polish colleagues, they were keen that I cycle the north coast, and not the center, as the north coast is apparently great, and the center not so much. The Belarus Visa sounds like it’s non-trivial, so will see how that evolves.

Now I must ensure that I have the essentials for the journey. The first essential is the bicycle.

After the quick repair in Norway I got the bicycle repaired “properly” a month ago, and again the bicycle mechanic had to “bend” the frame back to it’s original position, again. 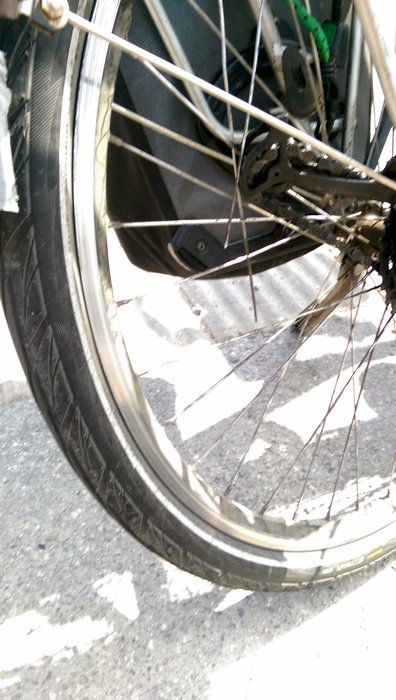 The entire transmission system was replaced, but the mechanic could give no certainty that it would last the duration of the trip, and now after commuting to and from work with the bike, and covering maybe 100k, the gears are slipping, and, if the frame has started to bend again, well, it won’t make it to Tallinn.

So the first priority is to re-visit the engineer and get his opinion on the bike. It may be that I can somehow reinforce the frame, otherwise I will need a new frame, or a new bike. This current bike is around 7 or 8 years old, and was custom built in Paris for around €1,300, not a huge amount of money, but probably the single most expensive thing I have ever purchased.

So there’s the bike. Then some other fun things – the tent for example, which is probably around 5 years old and used on 4 tours. The tent pole has been broken and repaired several times, maybe it would do to just buy a new pole. The pole is the main issue.

The plan is to do 100k a day, which, judging by last year, where I didn’t even commute to work, could be tricky to start with. On day two or three last year I had pretty bad knee and arse problems. It started off and got worse, and worse. I changed my seat height, it go better, then it got worse again, and again. It got worse, and then it got better, all of a sudden. Then it was fine. I changed the seat back to the original position and didn’t have any other knee problems for the remaining ~25 days.

If I do 100k a day, then, according to the original Belorussian plan, I would travel around 1,700k. So as I have a month, that will be just 17 days of cycling, and 13 days, doing other things. But anything could happen, I could spend more time in Finland, or I could even make it to Saint-Petersburg.

So, in the next few days I will need to confirm if there is anything wrong with my bike – the frame of the bicycle is the least easiest thing to replace on the road I guess – all the other missing items can actually be purchased on the way, although some things are easier to find than others, so I will be running around Berlin for some things, such as the tent and handle-bar bag.