Sitting in a campsite in the sun, in front of reception. Occuping one of 4 tables, each occupied by a single person (three of which are lone cyclists), mine is the only one in the sun, as I have been in the sun all day I guess it should make no difference that I spend the time writing this blog sweating and squinting at my laptop screen.

Was woken from a dream this morning by the sound of a wasp, in the dream, and on awakening there was indeed a rather large bee flying around my room slowly clockwise, inspecting everything, and it would only be a matter of time before it made its way to my bed. Rather than wait for this possiblity, I got out of bed and opened the window and persuaded the wasp to exit. This was how I was out of bed at 6am.

I ate breakfast, read the depressing English news, and the even more depressing global news, and then answered some emails, and did a little bit of programming, before starting to pack my things.

I had half packed everything over the previous week, and it remained only to skirmish around the apartment looking for things that I might need. Things I found: Coffee, Coffee Maker, Socks, Underwear. Things I didn’t find: Penknife. My little €15 Swiss Army knife has been indispensable in previous tours, fortunately I have an even cheaper multi-tool knife purchased in France almost 10 years ago, it’s a bit shit though, so will need to keep an eye out for a new Swiss Army knife. 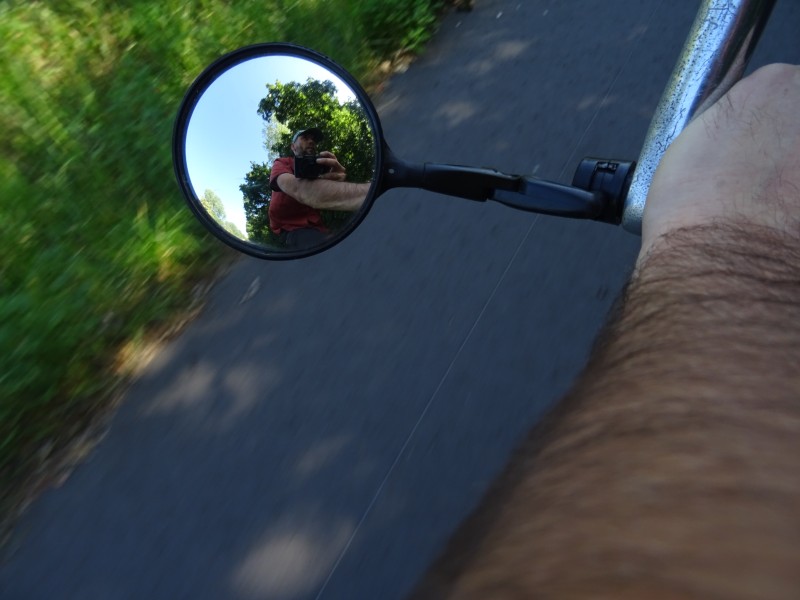 After checking everything was turned off, then unplugging everything, I dragged the bike out into the hallway of the apartment, before I closed the door I checked to see if I had my key. I didn’t, it was on my desk inside the apartment. After fetching the key and attaching it to my lanyard (used to not lose my keys) I persuaded my fully-laden and fragile bike to descend the 4 flights of stairs. When I breathlessly arrived at the ground floor, I thought it would be prudent to ensure that my front door was locked. I ran back up, and, on the floor, in front of my apartment was my bank card. The same bank card I had left in England and had resent out to Germany, the bank card that arrived just last Friday, and that could have delayed my trip. My emergency, backup, bank card was almost lost in the first 5 minutes of the tour. I decided to put it somewhere safer. The front door was indeed locked.

The ride out of Berlin was standard, my only training for this tour, over 2 months ago, was a single 100 ride around Brandenburg, which included the first checkpoint of today’s ride: Bernau bei Berlin. 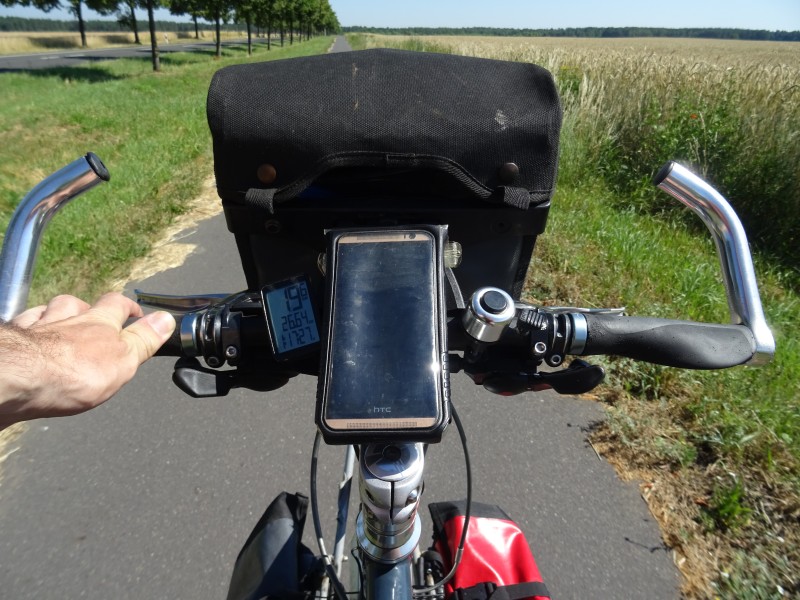 A pensioner just sat beside me. He is also from Berlin, and cycled from Berlin and this is his second stage, he stayed the first night just outside of Eberswalder (my second checkpoint today), and then cycled here and has been here for a week.

I stopped after around 45km in Eberswalder, I didn’t have much breakfast and was yearning for a cold drink. It is Sunday, and not many places were open, but as always there were some Turkish restaurants open, and I stopped at one and ordered a Falafel Dürum and a cold beer, afterwards I found a bank and got some emergency Euros – I would soon be leaving Germany, to Poland which has a different currency, but Euros are always a good fallback plan. 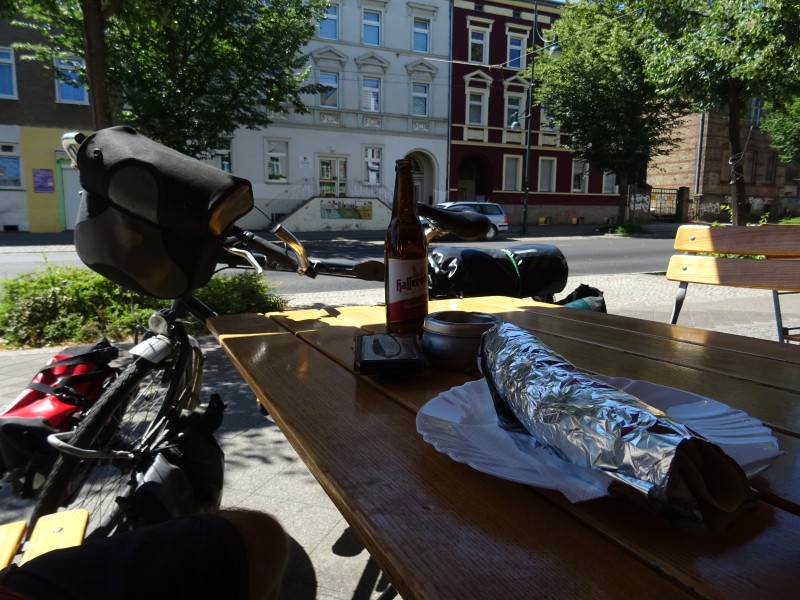 Until 12, and even until 2pm the heat was not too extreme, and I wondered if this was as bad as it was going to get – if it got worse I don’t know, maybe it was the prolonged exposure, but soon I became uncomfortable in the heat. I had plenty of water, but it gets warm, and doesn’t deliver the relief that an ice cold drink can deliver. This is a familiar problem, and I didn’t pay it to much mind, but looked forward to the next place I could get a refreshment.

The route was largely peaceful, and I navigated through quite roads, through open country, through various small rural towns, with falling-down buildings and churches. 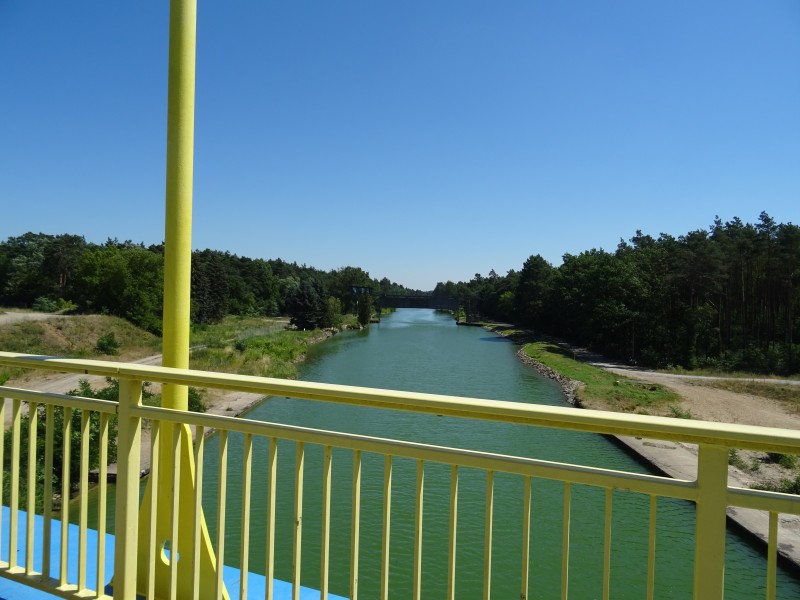 Canal - aparently there is a cycle path here

The bike is holding up after 130km. After the last tour it was in a fragile, and broken state, I had it repaired, but the mechanic warned me that the frame (specifically the part of the frame holding the derailleur) isn’t as strong as it used to be after the last accident, I am worried that my gears will start to slip at some point, but so far the gears are perfect, and the bike is running almost silently, and in the quiet roads all I can hear is the pleasing humming of my tyre on the asphalt.

The terrain was mostly flat, and was surprised that I could maintain an average speed of around 20km per hour, and occasionally make 30km/h on the flat (perhaps with some wind backing me up).

Physically I feel fine, the last tour found me struggling in damp weather and bailing out on the first day at around 80km. I did some training 2-3 months ago, if that can count, by riding 100km. But in any case, today was, in terms of body mechanics, fine, and I have now only the mild muscle ache which comes after more-than-average excursion. I see no reason why I shouldn’t be able to do at least another 100km tomorrow.

I stopped three times, first at the Eberswalder for lunch (the Falafel Dürum). The second time I spotted a pond, and it was hot, and I fancied, for lack of other options, I could dip my cap into the cold water and cool myself down, but upon testing the water, it was warm and dirty, and decided to sit down in the shade for some minutes, study my phone, and hydrate myself with the war water that I already had.

The next stop was in Gartz, near the Polish border, and only a short ride to my current location. I spotted a “bier garten”, and decided to order a beer. “Can I order a beer?”, “Yes, Naturally”. “Then one beer please”. Later “Would you like anything else to drink” “Yes please - water”. “What for water?” “Urgh – water?” “Yes, but what water? Small, Large” I only wanted tap water, but I went for the small option. She brought out a small fizzy water, and it cost me in total €5.60 and she didn’t accept the tip. I asked another staff member if I could ride the path next to the river to the camp site, she said that I could, and recommended it heartily (the alternative was a diversion on a main road). 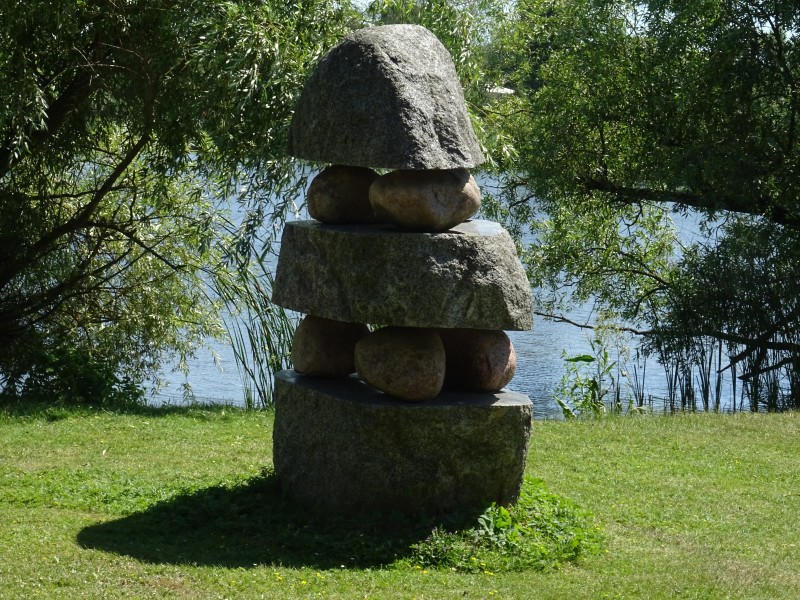 Rock sculpture near the lake at Gartz

So here I am in the campsite “Campingplatz Meschern”. On arriving I could see three other cyclists, all three pensioners.

I got a beer and sat down to write this blog, and then was approached by one of the pensioners who sat down and we had a chat, then another, drunk, pensioner started conversing with me (well us, but mainly me) “I am pensioner, I love English pensioners, I was in Spain with English pensioners, we had so much fun. Not like German pensioners …” this felt a bit awkward seeing as I was sitting with a less drunk German pensioner who was showing me the cycle paths through Brandenberg and Poland. I had the impression that the two pensioners were not on the best of terms. But I sat and spoke with the two of them for about an hour or so.

While we were talking about 4 other cyclists came up to the now closed reception, three from Germany, and one Polish cyclist who spoke neither English or German.

In summary, nothing bad happened today. I don’t seem to be sunburnt (although my skin is reddening, and although I was wearing socks and sandals (to protect my white feet), the socks didn’t completely cover the “white” area. 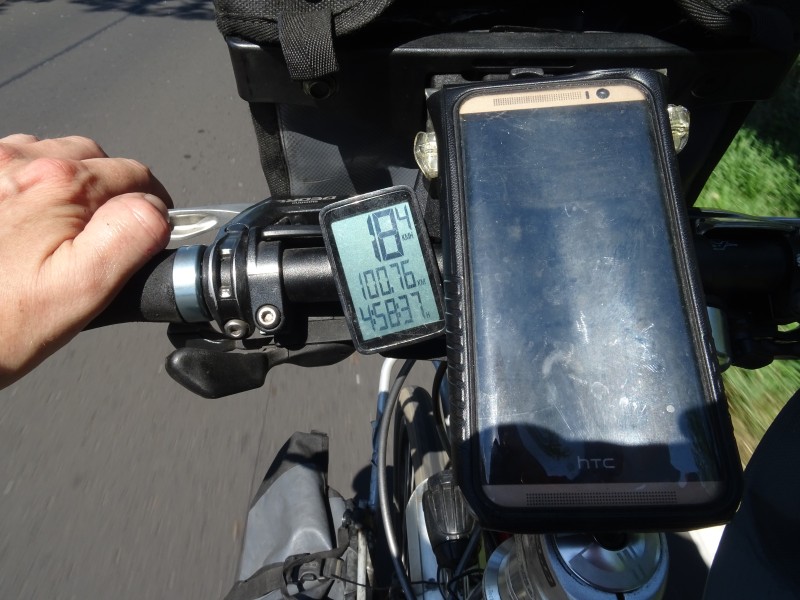 When I realised my feet were burning I decided to put on some more appropriate socks, at which point I dived into my clothes bag, reached down, but didn’t find anything. Emptied the bag, and there were no socks at all. I had forgotten my sock collection! I discovered that I had plenty of other underwear however, and boxer-shorts are more valuable than socks – I only use socks to protect my feet until they can defend themselves from the heat, and then I will wear only sandals. 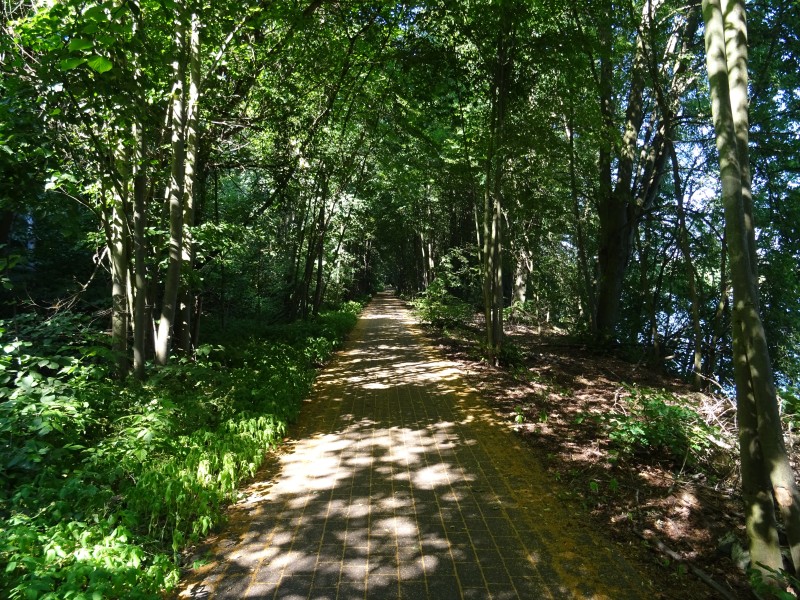 Path running next to the Oder river to the campsite

I don’t feel very hungry, there is a restaurant here, but I might just cook up some baked beans, and I have some porridge for tomorrow morning.