Didn’t sleep too well last night. I situated my tent close the the main building where there was a collection of tables and chairs, and these were appropriated by another small group of cyclists. They operated at a reasonable volume until 12, but as tents have absolutely no sound insulation, it’s as if I was there at the table with them. This drove me slightly nuts and I resorted to playing music in my headphones to drown the sound out, while sweating in the still uncomfortable heat, at midnight the small group called it a night, and the temperature dropped and I was able to crawl into my sleeping bag and sleep.

In the morning I woke uncomfortably. I am using a new sleeping mat - the one I used previously was quite good, and I could almost guarantee a good nights sleep, but it had a micro puncture (which I absolutely could not find) so while it stays suitably inflated for 2 hours, it will be deflated after 4. So, I got a new one at Decathlon. It’s a half-size inflatable matress, and I could probably fit three of them in the same space as the old one. The old one was more comfortable however.

I lay in bed feeling awful and wondered why I was doing this. Then as the tent started to heat up I rose up zipped open the inner tent and made a coffee with my Italian coffee-maker, then I boild up some porridge - I didn’t have any sweeteners, so I just put a lump of peanut butter in, maybe the extra salt and sugar would do me some good.

More or less efficiently I packed up the tent and left, waving good bye to the now several cyclists who had all congregated at a table and were having breakfast.

The Polish border was just around the corner, and I crossed the bridge over the river Oder as if it were any other bridge in Germany (Poland is in the Schengen zone, no passport checks). 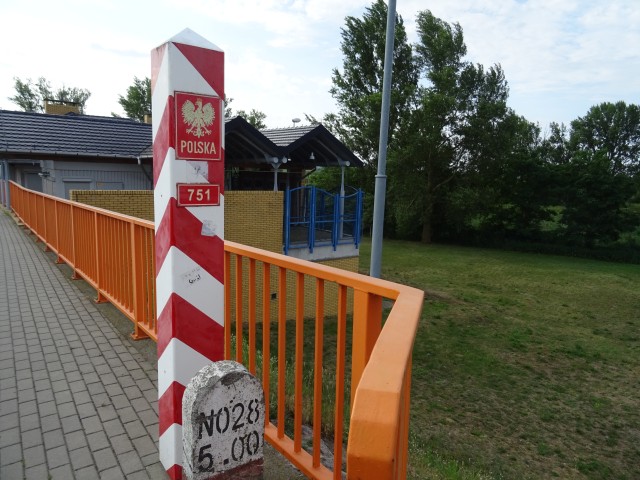 The subsequent road was fifty-percent cobblestones, but a walkway proved a good alternative to the road, when I entered the twon of Gryfino I stopped and kept me eyes out for: 1. Bread, 2. Headphones. Bread would be easy to come by, headphones not so much. I found neither, not did I look very hard. 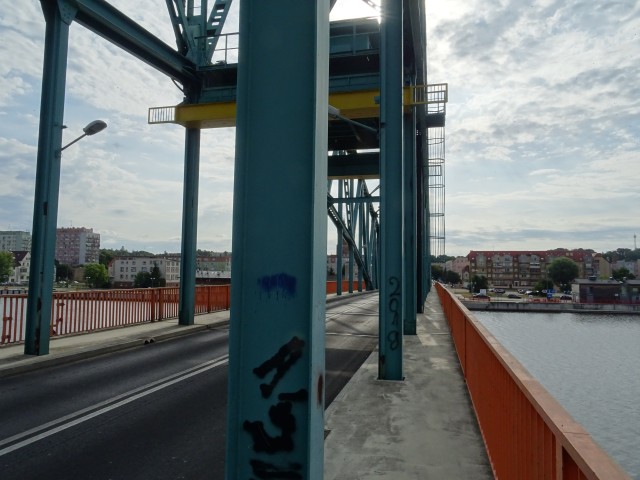 The not-drunk pensioner from the last night had shown me some routes to take on the bike, and I checked my map to see if I could find them. I couldn’t remember exactly, but remembered some of the wiggly lines and lakes, then I just decided to head North or North East, taking any road that isn’t a motorway. 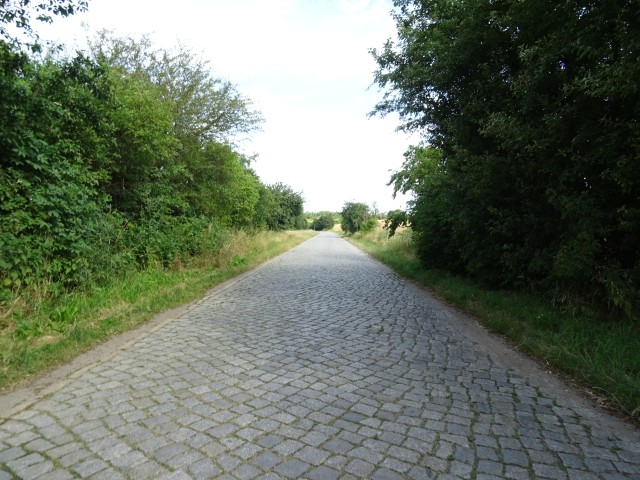 This policy led me to the second cobblestone road of the day, and there would be more. This road ran for about 3km, and the cobblestones were shaking me and the bike continuously, limiting the speed and causing me to question how much of this punishment my bike could take.

After about 30 minutes I stopped for a photo, then pedaled forward and there was one of those omninous KLUNK! noises. I stopped immediately and as the sound came from behind had a look at my back wheel. The V-Brake was hanging loose and had fallen into the wheel. It wasn’t serious – but the pin/screw holding it in had been vibrated out of it’s socket. I ran back about 500m to see if I could find it (it would have been big enough to be easily seen). But no luck. 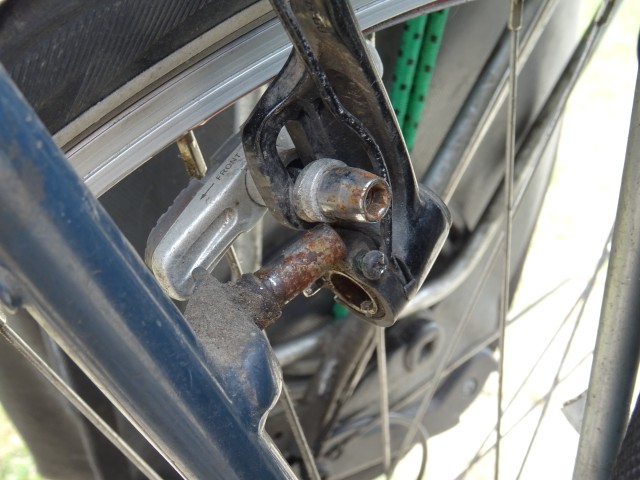 Don’t forget to tighten your parts before riding on cobbles

I removed the loose brake - it should be easy enough to get a replacement pin, but my bike is now front-brake only until I can find a bike shop.

I kept heading north, bypassing the city of Szczecin to the west. This took me around a lake – there was only the main road, which I guessed, would be forbidden to cyclists. But the pensioner had mentioned smaller roads, and indeed there were some green dotted lines on my map. I was also able to see a cached version of a cycle-map overlay on the map – which basically means that when I zoomed out several times I could see a thick blurry red line which indicated the path of the Euro-Velo Iron Curtain Route. It passed straight up through the fields on these dotted green paths. 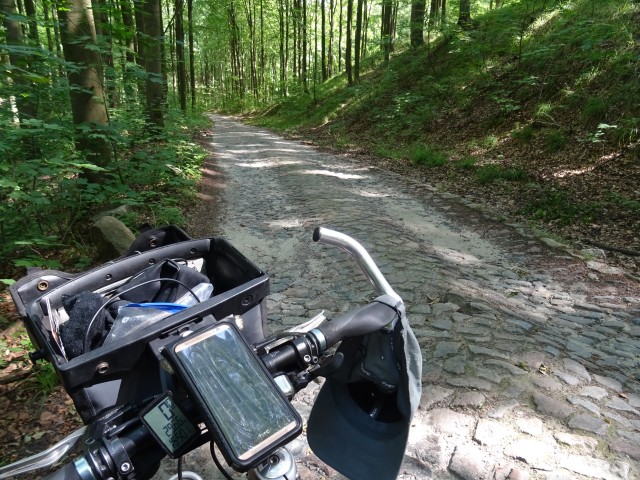 For lunch (well, it was 11:30am - but I left early) I found a Perogi restaurant, I had assumed it was a bakery, but was tempted by Perogi – a Polish food, “Tortellini” type wraps with fillings. The lady spoke a small amount of German, and I was, (I think?) able to indicate that “No meat, No fish”, at least she then gave me a 2 Spinach, 2 Mushroom, and 2 of another variety, which I don’t think was meat. I ate in the retaurant being able to look directly at my bike in front of the glass shop window. The Perogi was sprinkled with roasted onion flakes, and it was good and would get me through the rest of the day.

As I cycled through a small village which had a small road leading to the start of the green dotted line – I was surprised to see the sign of the “Camino de Santiago” - the ancient network of pilgrim paths leading to the city of Santiago de Compostella in north-west Spain. There are very old routes leading from all corners of Europe, and very often the trails are supported by hostels which will cater for pilgrims either for free or for a reasonable price. 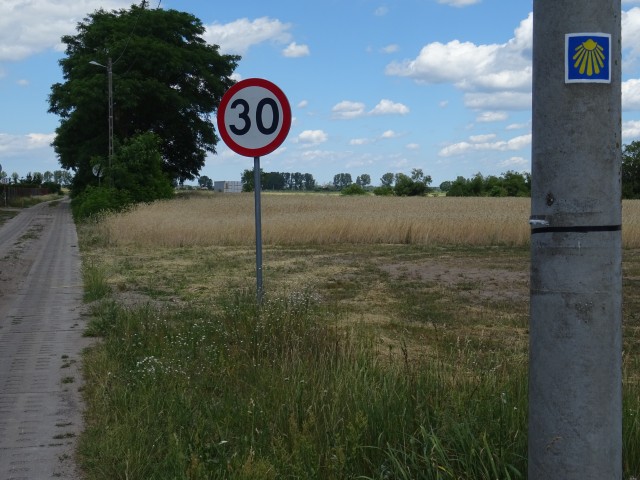 The road started off as cobblestones, before giving way to sand, then to large concrete slabs. It was not easy to traverse this section with the heavy touring bike, the wheels would slide into the deeper sections of sand, and it either took some extreme effort to pull myself out or the bike would slide into motionlessness. It was quite exhausting, but also good to be out in the open country away from all traffic. 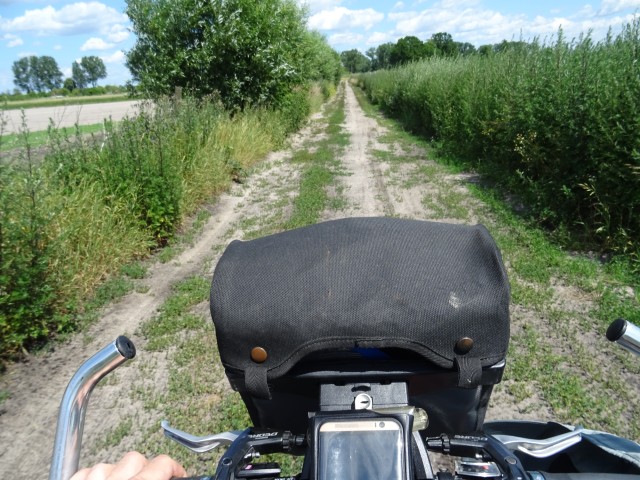 I didn’t imagine doing another off-road excursion today, but as I made my way to the main road, I reaslised that the main road was a motorway of sorts, and cycling was explicitly prohibited – so I checked the map and found more green lines, and this was a pattern for the remaining 5 hours of the day.

The sand roads are the worst – I am not sure why there is so much sand, but its impossible to make good progress, and you are frequntly slowed to almost a halt while the front tyre slides into a little sand pit, or you are stopped completely, one I lost my balance and jumped off the bike, more often I kick the ground to keep the bike on the right course. 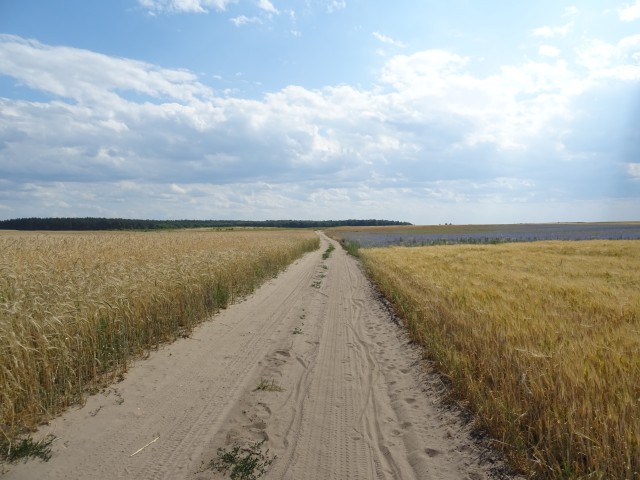 Then there are the cobble roads - more consistent then the sand, but they impeed your speed and rattle your bones, whilst potentially causing important pieces of the bike to fall off.

Less frequent than either of these are the good-old dirt roads which are solid and smooth, and littered with the occasional pile of rocks. Not many of these today however, they probably all turn to sand eventually.

As I made may way I up, I passed through the town of Stepnica – in retrospect I remember the pensioner saying that it was “Ikea Town” - as I passed thorugh there was indeed a large Ikea factory, with streams of blue-uniformed Ikea workers leaving and entering the facility. On the right hand side of the road was a hige lumberyard, on the left, the factory. I guess a large proportion of this town worked for Ikea. 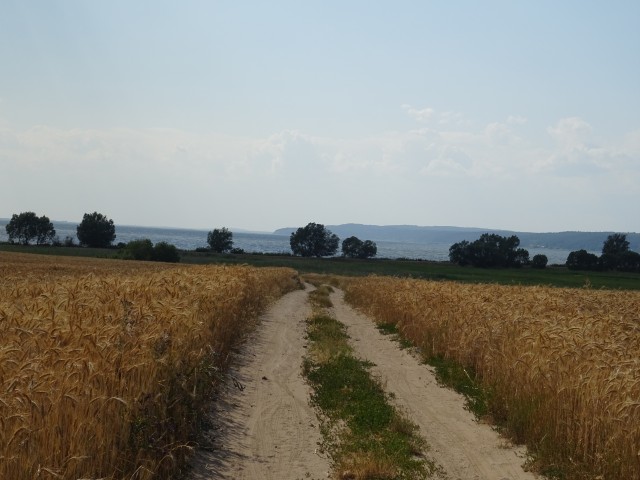 First glimpse of the sea

The target for today was the north coast, from where I would cycle east. It had taken much effort and more time than anticipated due to the road quality, so after 110km and 7 hours I decided to stop at the next camp site. Cycling always on these green lines on the map, I made my way to what was marked as a camp site. I followed a dirt road, to a chalk road, which led to a big ranch -like gate, which looked abandoned, but the signs were still there and it looked hopeful none-the-less. I arrived at the campsite, there was a large house, and the whole place had a wild-west theme - but there was nobody there. There was a reception, which asked to call at the house, which I did, and a phone number, that I rang. But no response. It would have been a perfect place to camp, precisely because there was nobody there. But I decided to carry on. 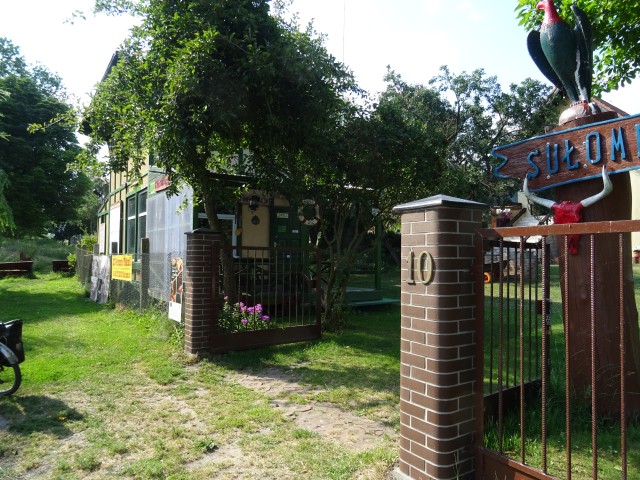 The Camp Site where nobody was home

The next camp site really was on the north coast, and due to the motorway I was obliged to follow the green-line / pilgrims path the whole way. 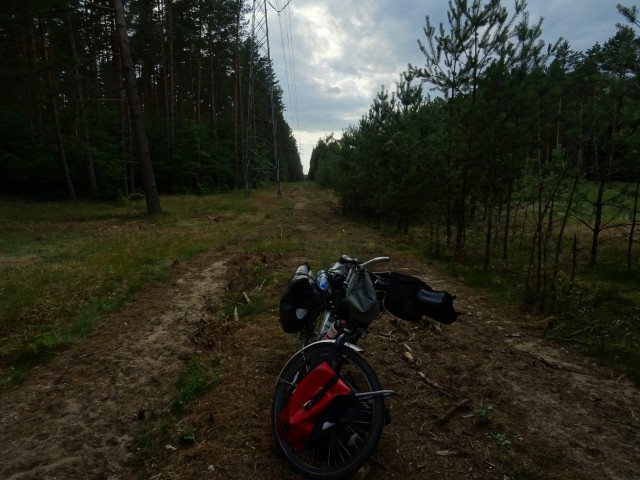 This was the wrong path

Despite the extra effort, and slow pace, time actually passes quicker on these roads - mainly because you have to focus the whole time on keeping the bike moving.

When I got the the campsite I had targetted (in Witamy) I realised that I had landed in a complete tourist trap. There were tourists everywhere, and the campsite was just a field of camper vans, with a steady flow of white-shirted, red faced, slightly-overweight people going in and out. I considered getting a hotel, or pension (and everyother house was a pension), but as I cycled further through the town I decided to just keep going east.

The road leading out was a minor/major road, the was reasonable frequent fast moving traffic, and I was worried at times when drivers would give me the benefit of half the road as they passed me, but then I would look on in horror as they looked set on a collision course with traffic from the other direction, and twice it was close enough for horns to be used. I decided to ride on the grass shoulder after that.

The road was pleasant, and provided the first “mountain” of the tour – I think it could only have been 100-150m (my phone was out of batteries so I couldn’t check). I had now been riding for around 9 hours, and I was certainly feeling tired and hungry, but my legs were still working well. Then I found this campsite, which was not marked on the map, but when I pulled in, there was a car pulling out and the man driving (his wife next to him) said in perfect English that this was a very good campsite, and quite, well, apart from the noise of the road.

The campsite cost 25 Zsloty, or around 6 euro.