Today has been a long day. I am now finally sitting in a Pizzeria in one of the many pizzerias in a town which is one of many towns with many Pizzarias.

At the campsite I had a slightly better sleep, and think that I will become accustomed to the uncomforted and learn to sleep better. The campsite was very quiet, I woke up at around 5am, then tried to sleep again with some success, finally sitting up, getting out of the tent, using the toilet, then coming back and making coffee and porridge, before packing up. It had, as yesterday, briefly rained in the morning before I exited the tent.

I rode out of the town and proceeded east, which is the only way I’ll be going for the next few days. I stayed on the main road, and noticed that my gears were slipping.

My gears were slipping. This could mean one of four things:

If the frame was bent I would be in it would be a big problems, if it had happened towards the end of the trip it would be less bad, I could then force it into shape and expect it to last another 20 days, but if it happened only after 2 days it would be bad. If it happens at all it would probably mean I need a new frame sooner or later. So this was on my mind. 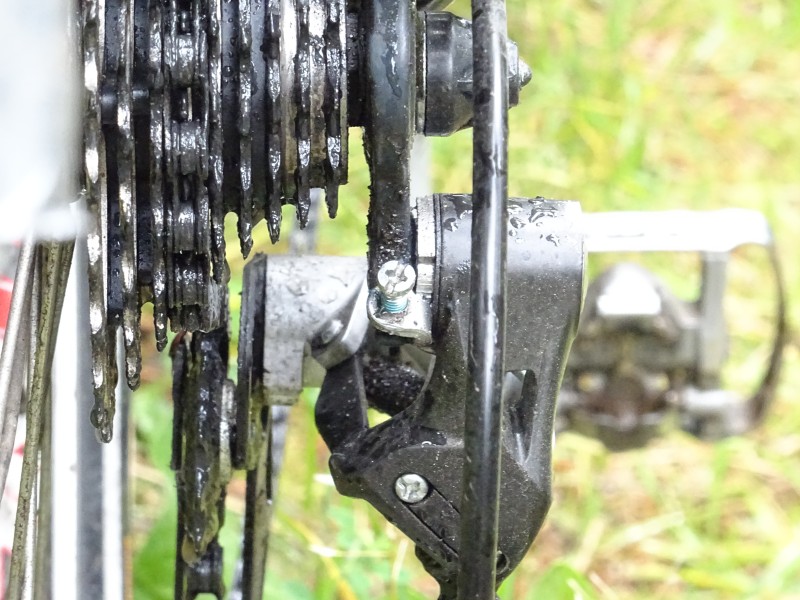 I picked up an energy chocolate bar and a pastry at a small shop, then around 15 minutes later I pulled in from the main road into a picnic area and sheltered from the rain. I checked my wheel for horizontal movement, I could perceive none, then I checked the angle of the frame, it looked straight, then I rubbed my fingers on the chain and sprocket, and I could feel no sand.

So the current status is the gears have gotten worse, and they are switching randomly, but I don’t know why. I hope it’s just sand and that it doesn’t get worse.

It was raining intermittently in the morning, occasionally quite hard, and it soothed my sunburnt shoulders now hidden under a shirt.

I was riding along the coast but I hadn’t until this point had a direct view upon the sea - the roads are typically sheltered from the strong inland-blowing wind by trees. The wind was strong and the waves were blowing onto the beach. 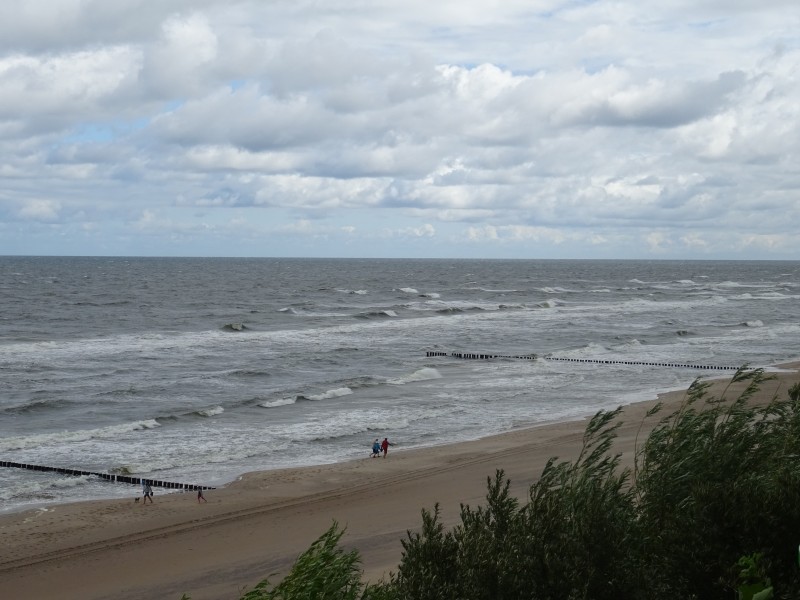 People walking on the beach

The Euro-Velo Iron Curtain Trail (13) is clearly marked on this part of the route, and it looked as if sections of the cycle trail had been sponsored by the European Union. There were dedicated bike paths along much of this part of the coast, and some sections were busy. 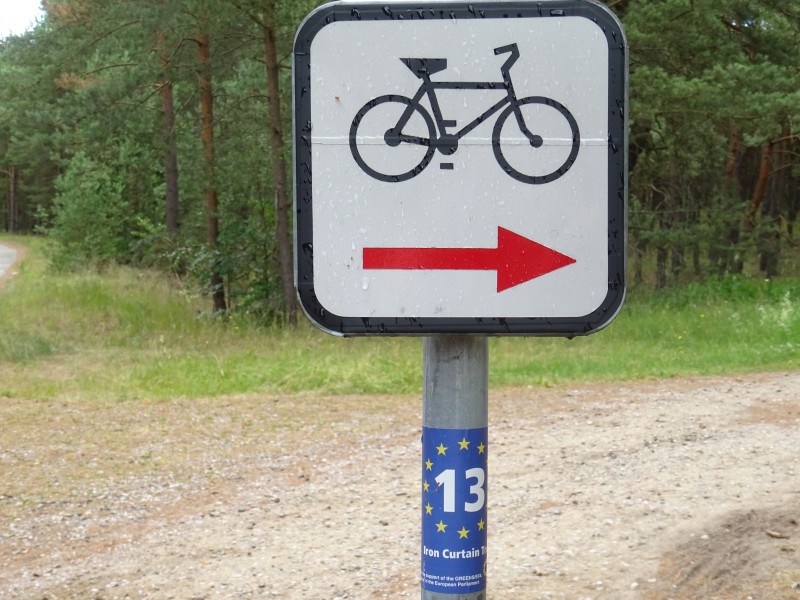 The first town I hit on the north coast yesterday was a model for the next 5 towns I would visit. There are at least 100 “holiday makers” in any direction that you look. Each has a main street selling hats, swim suits, buckets and spades. Pizzerias, Berlin Kebab Shops, and each has it’s a fair ground which looked identical to all the others. 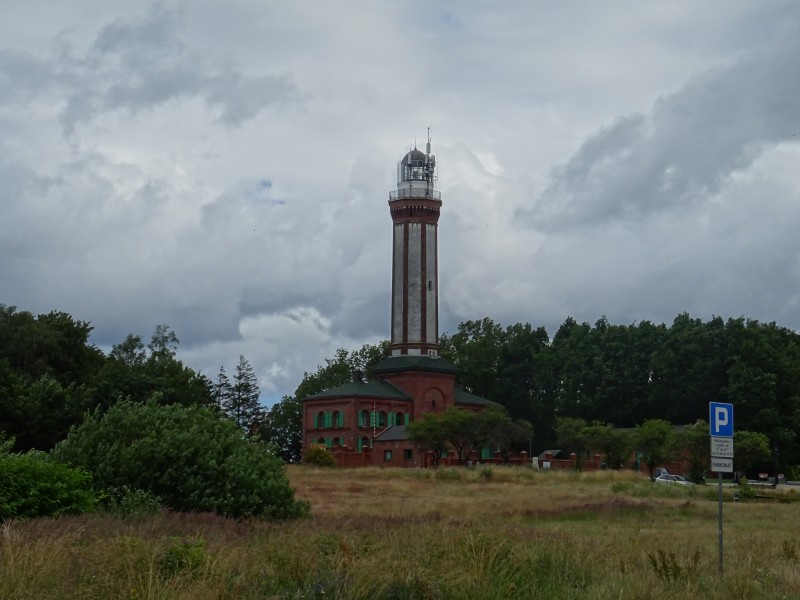 The amount of people was astonishing, even on the rural cycle paths between the towns people were passing at a rate of 10 a minute, I was slowed down by cyclist congestion at some points. 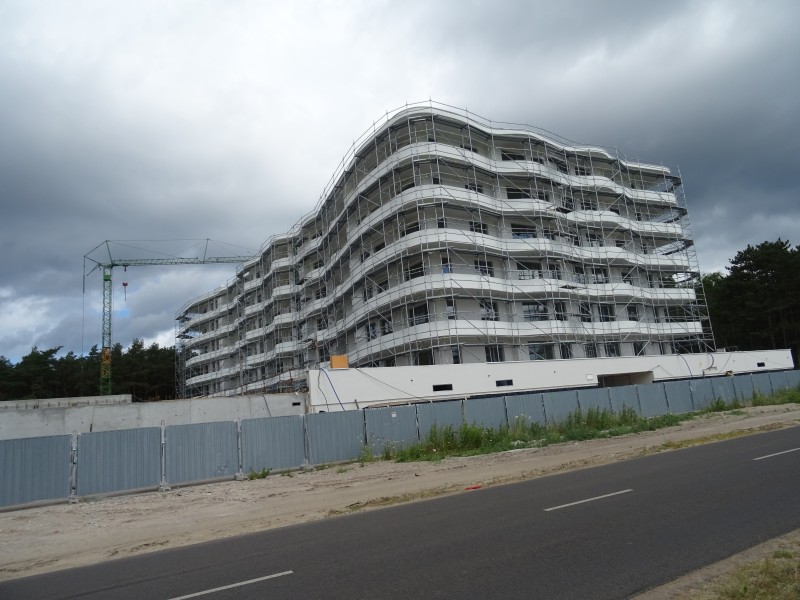 I would say that the coast is saturated with tourists, and possibly there could be less - bu then there were innumerable construction projects in forest areas promising even more hotels, apartments, restaurants, fair grounds, etc. 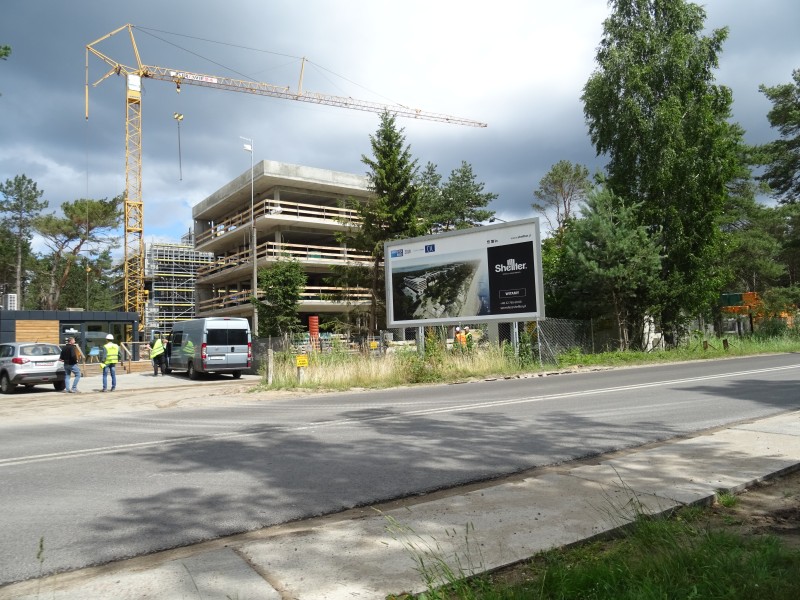 Each town seemed to be linked to the next with a cycle path, except one which was being built as I (we if you include the other tourists) rode around the digger and into the worst sand I have encountered anywhere that is not a beach. Even as I was there, there were several tourists in front of me and more behind me, all with mountain bikes and all falling off and being unable to ride through the sand. 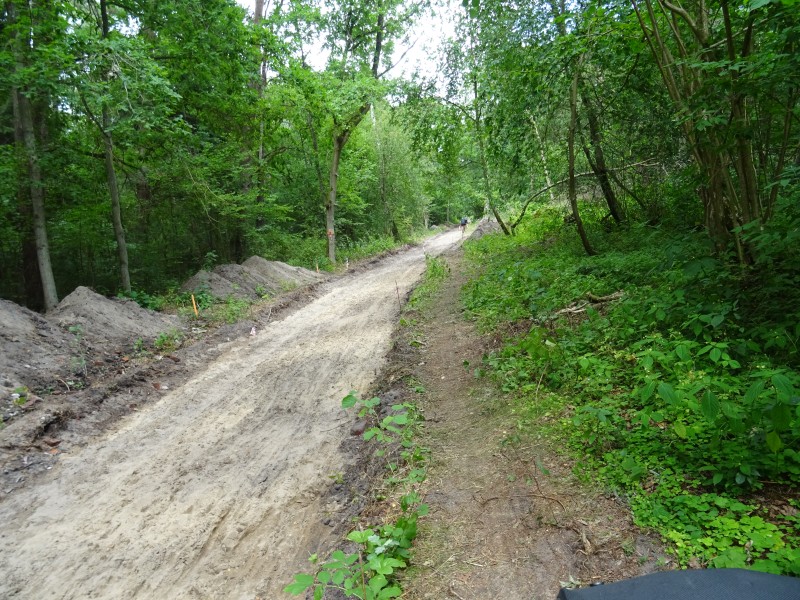 For lunch I tried to find another Perogi restaurant, but the density of tourists made me not want to stop anywhere - I didn’t have much food with me, just a can of lentils, bread and peanut butter. So that’s what I had for lunch.

Areas like this make me uneasy - everything is where it is for the tourists/holiday-makers, there is nothing to see except the same tourist culture that you get in every other country in the world. The whole thing seems to unnecessary and wasteful. I could imagine that the tourism companies may well distribute people into one town or another and make them all the same on purpose. 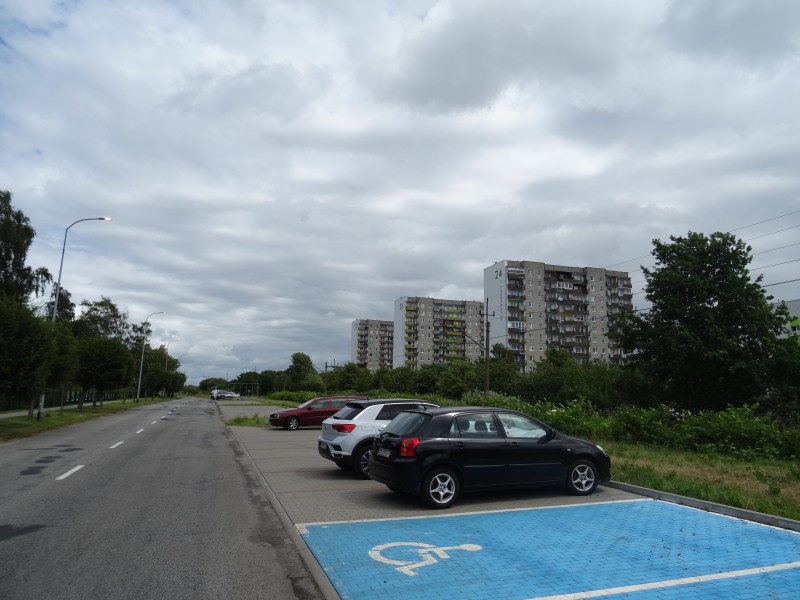 Blocks of Flats (unrelated to rant)

After finishing 100 I could not bring myself to stay at any one of the 100s campsites. Each time I thought I would stay at the next town, it was just as full and foul as the previous town.

At around 120k I turned in-land. Here the traffic died down, and the tourism gave way to agriculture. At one point I passed a sign which advertised “Agrotourism Camping 50m”, I followed it to a house with “Agrotourism” painted on the side of it, and a small sign saying “Camping” with an arrow pointing into the garden. I entered but there was nobody there and not a tent or caravan in sight.

I then rode through some villages, with absolutely no tourist influence at all, each had a single village shop, and not much else. The only place that looked as if it might offer me accommodation within a reasonable distance was the coast, so I went back in. I decided to “be brave” and just take the next possible accommodation (hotel, pension).

The next town was indeed the same as the others, just as many tourists etc. The first place I tried was a restaurant that I thought offered accommodation, but they didn’t, the pension was upstairs and the directed me behind the building, but I couldn’t see anything obvious to do there, so I carried on down the road, then I saw a sign for “Pension 50m”. I went 50m and rang the reception, a man greeted me “Dzień dobry” (Jean Dobray), I asked in my best Polish if he understood English or German, he spoke German. 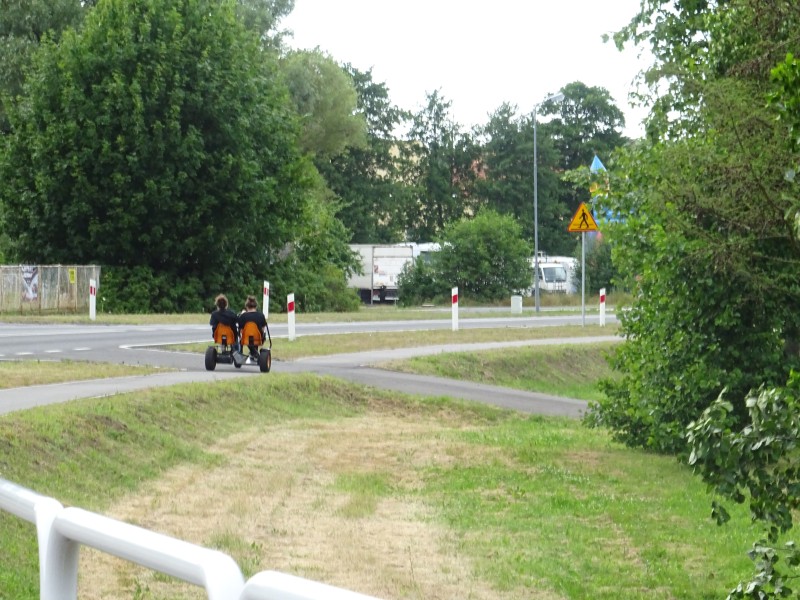 Loads of these things

My bike is in the reception area of the Pension. The pension will cost 60 Zsloty (about 15 euro). The room is fine - the bed is a sofa bed.

I am a bit apprehensive about continuing along the coast tomorrow, if it carries on like this I would much prefer to turn inland.