I’m glad that I turned inland. I decided to head to the town of Bytów which was only 100km from the town, and would be a stepping stone to Gdansk. The people I dealt with have all been unquestionably friendly and the roads have been quiet.

I left the hotel without fanfare at around 08:00. I felt pretty horrible - when I got into the hotel last night I looked in the mirror and I had heavy bags under my eyes, and I felt like I had heavy bags under my eyes. It’s the 100 mile look, more over 100 miles of which a good deal of those miles were not easy. I managed to eat a large pizza and a whole bar of chocolate the night before. In the morning the bags were gone, but I felt hungry and still tired.

First priority was breakfast then. I rode east to the next town at which point I would be able to take a secondary road south-east towards Bytów. The town, unlike the others, was quite nice and had some history, there were normal people here. I found an open cafe and ordered a cappuccino and a bakery snack and sat outside the cafe in view of my bike, and the coffee helped to wake me up. I then had a slow ride around the town, ostensibly looking for either a bicycle or headphone shop, but really just exploring.

The wind has been behind me the whole time and today was no exception as I cycled effortlessly down the quiet country road. I felt good and sang along to the music which was playing in my head. I still didn’t have any headphones, but my brain seems to play it’s own music anyway – today it was Venus in Furs (Velvet Underground), yesterday it was a Chopin Nocturne and I think Pulp’s “Common People” made it in somewhere.

I stopped at the next town and resolved to find some headphones, after cycling around the small number of shops I settled on the only one which claimed to sell computer accessories. I demobilised the bike outside the shop window and went inside, on the left was a counter behind which were stacks of computer accessories, on the other-side they were selling stationary. I found a display with in-ear headphones, and after waiting for the guy to serve another customer he greeted me and I asked if he spoke English: “Of course!” he replied. He seemed so happy, and was obviously glad to be able to use his English skills, after we had agreed on the pair of headphones I would buy, he asked “How is my English?” I replied with “Dobre!” (good). It was just a simple transaction, but it left a good impression on me. 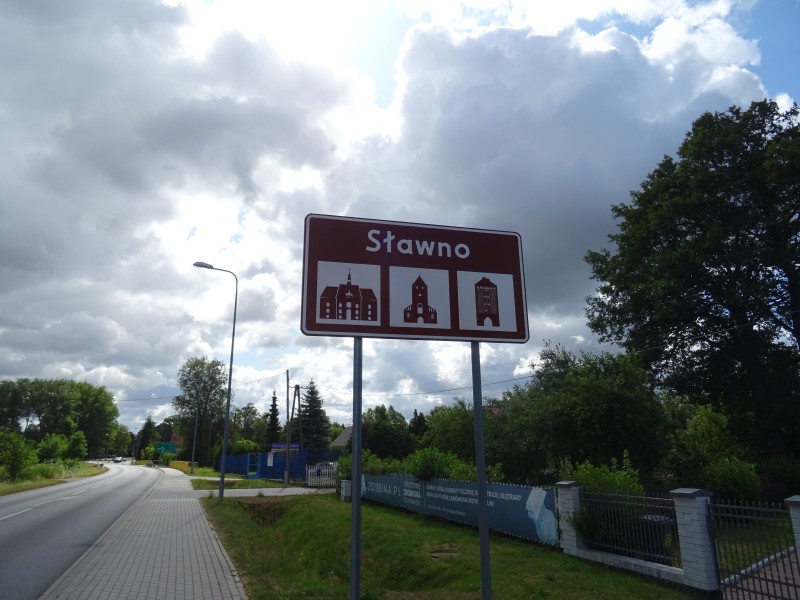 The town where I got my headphones

I was skeptical about the headphones – I had never heard of the brand, and they were the most expensive headphones of that type in the shop (€12) - twice as much as the pair the guy had recommend to me in fact. So I was happy with the quality, there was good low and high frequencies. The only problem was that they were the weird, now standard, plug-into-your-ear-completely type - ironically “for sport”, but the effect is that you can hear all the low frequency rumblings from anything that’s connect to your body – on a bike this is the rolling sound and bumps on the road, when running the constant thump-thump of your feet on the pavement. So actually, useless for sport. Best suited to lying on your bed and not moving. Given a choice I always prefer the type that just rest in your ears (peak circa 1999). 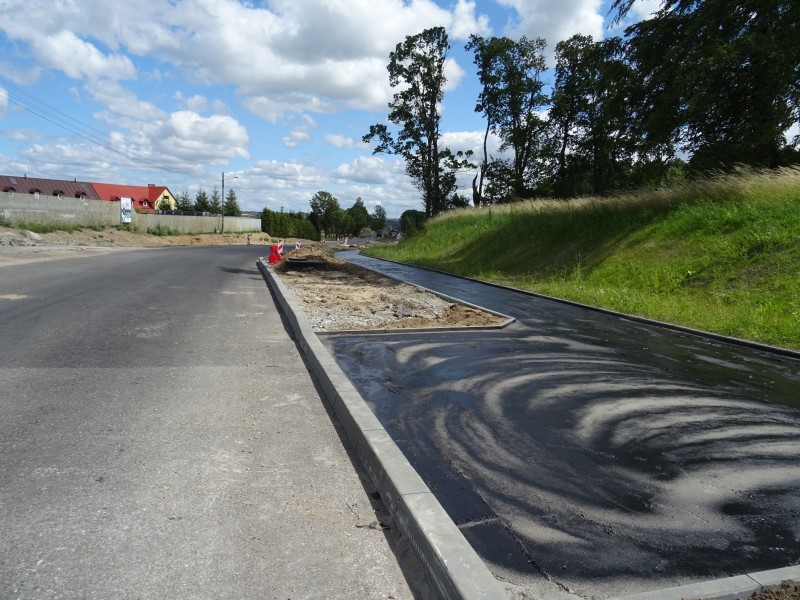 The cycle network has been quite good so far, and still under construction

I now had music available to play, this is a nice facility sometimes, as you can get transported away, but equally you can rely too much on it. The most practical benefit will be that I will be able to start doing some Polish lessons (and maybe a language or two from the other countries I will visit, if I can find any).

For lunch I had acquired an energy drink and a bread roll - so I stopped on a bench and had a peanut-butter and nut sandwich, that is, peanut butter, and mixed with some mixed nuts. My reasoning is that there is protein in there somewhere.

I rolled into Bytów after a reasonable short amount of time relative to the previous two days. It wasn’t as easy as I thought to find a hotel, and I had to google, and then it was much more expensive than I had thought (€35 compared to the €16 yesterday), but breakfast is included, and I’m not on a strict budget. 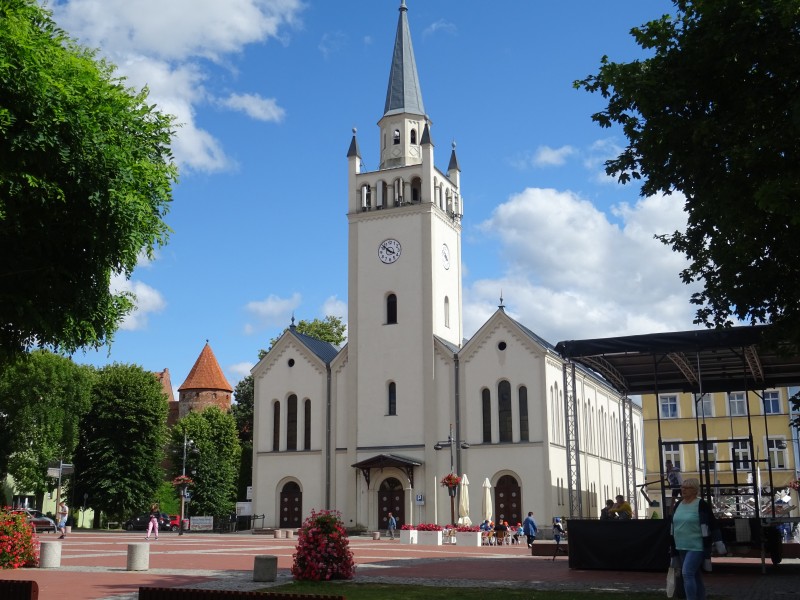 The bike was still missing the rear breaks due to the screw falling out on the cobbles on day one, I asked at reception about a bike shop (via. google translate) and she made two hand gestures indicating “turn right” then “left”. I left and surely found a bicycle shop, the young man who served me spoke great English (most if not all young people speak good English). He provided me with a new screw, for free, and I should now be one again at 100% breaking capacity. 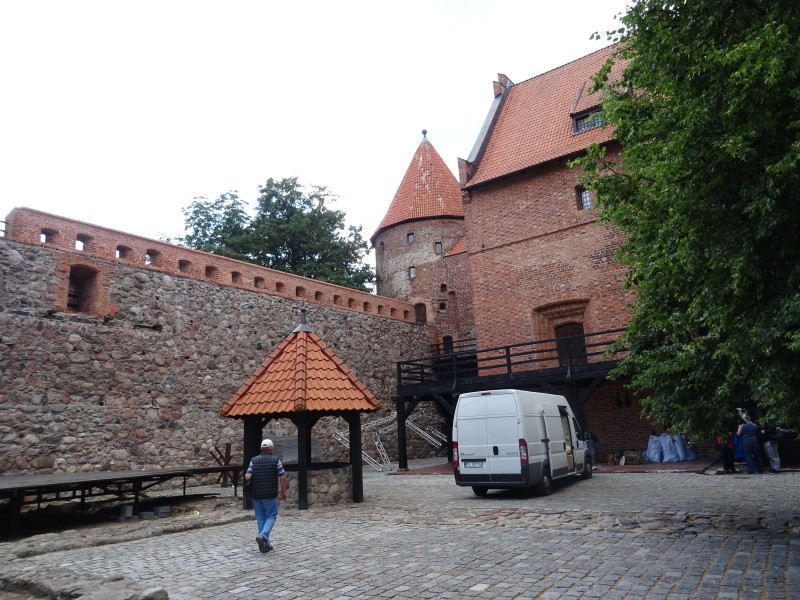 Inside the Teutonic courtyard

The main attraction in Bytów is it’s Teutonic Castle, built originally by the Knight of the Tutonic order before changing hands several times and being extended and rebuilt over the centuries. I had a look, and visited the large and (at the time) rather empty museum for 10 Zsloty (around €2.30 or so). As with all museums I felt chronically tired after visiting 30%, but I persisted and found it interesting. At one point the only other visitor approached me and started speaking in Polish, then in English asked me to “take photo”. “Follow!” he said. I followed him to the top room of the tower, where there was a miniature of the castle as it would have looked in Medieval times, and a knights helmet and sword for photographic purposes. He asked me to take a picture of him with the helmet and sword for his son, who “really likes this sort of thing”. After doing this, he asked if I’d like him to take a photo of me, and I agreed. 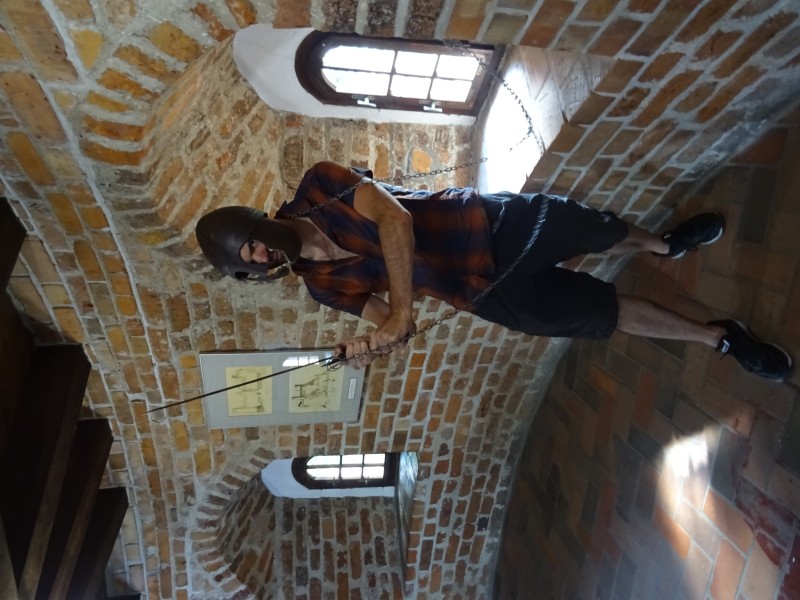 Stay away from this guy

After the museum I found a cafe, and worked for an hour on some open-source project, then went to a Pizzeria opposite the hotel (what else can I eat in Poland?). The woman there was also very happy to speak English with me, and was very welcoming, I’ve now finished the Pizza and am still sitting here drinking sparkling water (they had no beer).