« Dabki to Bytów
Gdansk to Elbląg »

There was a buffer breakfast at the hotel, featuring feta cheese, bread, cereals, and eggs. Again this morning I was feeling less than optimal, and still half knocked out even after the breakfast coffee.

I had now the required component to fix my rear break – the missing part was actually very common, and is the same screw that is used to affix the drink holders, so I could have easily cannibalised one of those.

My muscles ached in a dull way as I started cycling up the hill out of the town but after ten minutes they felt fine.

The weather was colder today, and I had to find my summer-cycle-gloves and put my jacket on (the gloves more because some rain and the associated chill factor). I cycled past some lakes, on increasingly busy roads as I approached Gdansk. The route was relatively unremarkable compared to yesterday. 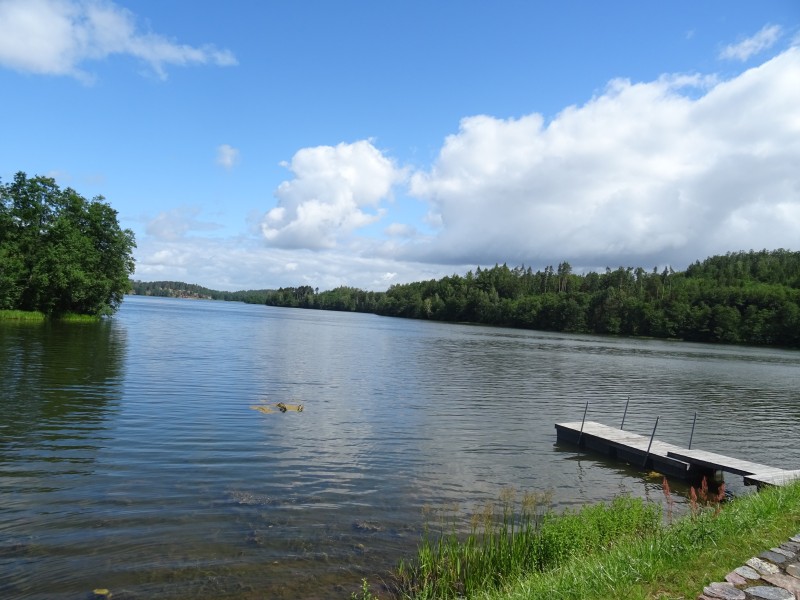 The previous night I had obtained some Polish, Lithuanian and Finish lessons. I didn’t find any Estonian or Latvian lessons, but Estonian is closely related with Finish, and Latvian with Lithuanian, so I should be covered. I did two polish lessons today.

I have been attempting to speak Polish since being here, as I have done some Polish lessons before, but I slowly realised when I was doing the lessons, that I was actually speaking (extremely basic) Croatian. I had previously spent three months in Croatia and picked some things up there. The two languages are Slavic, and at the level I was speaking at mostly mutually intelligible, but some of the things I said were far from the mark. Notably my “Do you understand English” was the Croatian “Dali resumiem angleski?” when the Polish seems to be “Che resumium po angelsku”.

I also occupied my self by trying to “learn” hot to interpret the various instruments on my wrist watch. One thing I had found to be invaluable on previous tours was a compass. I have always had GPS, but it is difficult to read in the sunshine and fiddly to turn the phone on, load the mapping app, etc. With a compass you can easily and quickly check that you are at least heading in the correct direction - having that facility often saves you from cycling a prolonged distance in the wrong direction. The best compass I had was a small one that clipped to my watch strap, but it fell off and I lost it.

Before I left I decided to look for a watch that had a compass built-in, and after looking at all the options I decided on this Casio “Pro Trek” watch, which has compass, barometer and altimeter (and some other less significant features, like sunrise / sundown, etc).

The compass is great, it shows the basic direction and degree bearing. The altimeter and barometer are less obvious though. The altimeter didn’t fill me with confidence in Berlin, the office would show as 50m on some days and 20m on others, it doesn’t use GPS so not sure how it works at the moment.

I calibrated it to my GPS yesterday, and checking it again against my GPS it seems to correlate within 10m (and the GPS altitude is far from accurate). Like the compass, it can be used as a quick sanity check. Determining if you are ascending or descending is not so easy, as sometimes your brain can interpret the environment as descending, but in reality you are ascending, and in these cases I’m going slightly mad wondering if something is wrong with my bike.

The barometer shows the air pressure in hPa (Pascals), it’s typically around the 1000 mark. I don’t really understand air pressure and its effect on the weather, other than down is bad, up is good (if I remember correctly). It shows the trend, and I am waiting for some bad weather to try and understand how to interpret it.

For lunch I stopped at the half-way town in Kartuzy and sat in a burger bar and had the only vegetarian thing on the menu - a toasted sandwich.

There was another liquid-related accident, as I had purchased an energy drink, which I drank immediately, but seeing no bin anywhere, I put it in my handlebar bag until I found a bin, it seems it was not entirely empty, so some of the sugary liquid got out, and a small amount found its way to my camera and the zoom control, which is now rather sticky. The lesson is to always put liquids (especially things that are not water) in plastic zip bags.

From Karturzy, the minor road I was on met a major road, so I switched to small country roads. From a brief look yesterday it looked complicated, but in the end I was able to make almost a straight line to Gdansk.

I decided last night to stay in a hostel, and this morning I reserved in the “Guitara” hostel, mainly because it was the first result on hostelworld.com. When I checked in it was very matter-of-fact, and I was allowed to leave my bike in the 24h hostel foyer for an additional 10 Zloty. I’m staying in an 8 bed dorm, and the bed seems OK. They have electronic lockers where I’ve put all my bags. In the basement there is a large room with a kitchen, sofas, and tables for breakfast (included). There is also a television. 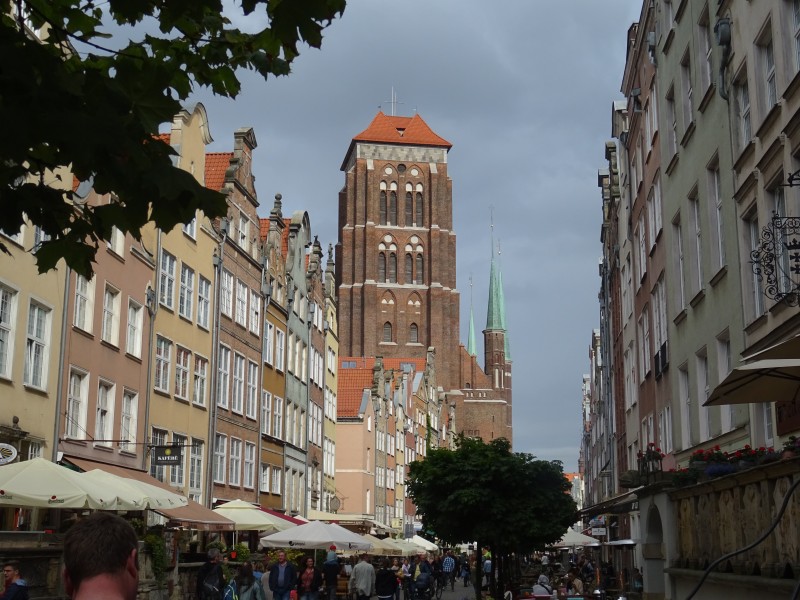 If I’m in a Hostel and there is a television, if ever I’m alone with it I’ll turn it off. I haven’t got the nerve to turn it off when somebody is there staring at it shoving food into their mouth. If I ever own a hostel, there would be absolutely no television anywhere.

I’ve had a walk around the center of Gdansk, and seen the epic Saint Mary’s Church (2nd largest stone church in the world) and had an unremarkable pizza.

Just outside the hostel

Later I joined an Australian couple in a game of cards (Asshole and President) and Vodka was served, , then we were joined by four Swedes, and a Peurto-Rican. All were in their 20s, and the Swedes had started drinking energy drinks at 11pm, and were intending to hit the town. I left with them at around midnight.

« Dabki to Bytów
Gdansk to Elbląg »