« Bytów to Gdansk
Elbląg to Bartosxyce »

Woke up in the dormitory this morning with a heavy head, we had consumed a fair amount of vodka the previous night. I expected to meet people in the hostel, as you almost always do. The first guy was Xavier, originally from Peurto Rico, but who has been a digital nomad for the past 7 years (and only 29 years old), the young Australian couple, Nikki and Ash, had spent the past 3 months in Canada and visited Mexico, before dropping in to Poland to visit relatives, and then a Swede who had just purchased a boat and came over to Gdansk as he was considering sailing from Stockholm. There were three other young Swedes who were clearly there to get completely trashed, but all were friendly and it was good meet all of them.

So with a heavy head I climbed out of bed at around 7:30, the breakfast buffer was down in the basement where we had spent the previous evening, I didn’t expect to see any of my colleagues from the previous night, as they probably got back at 6am, or perhaps were still partying. The buffer was quite simple, some cheese and meat slices, cucumbers, tomatoes and cereal and milk.

I didn’t manage to upload the days blog post the night before, so I finished it off and uploaded it on the savagely slow internet connection. I could have used my faster mobile connection, but am reluctant to abuse that as I don’t know how long it will last outside of Germany.

Still I was undecided if I was going to leave or not - Gdansk clearly had a lot to offer, and I could pass the day running, walking and working, and maybe play the piano, but at the same time I wanted to press on and save my rest days for later, although I’m fairly sure I can make it to Helsinki and back in one month, I don’t know how many free days I will have.

Getting out of Gdansk was done by trial and error. The main road running out of the city was at least not cycle friendly, if cycles were not forbidden, so I chose minor roads, but it seemed each road I took would lead to a dead end, or at one point an industrial lorry checkpoint, eventually I found myself on a clealy signed cycle path (all of EuroVelo routes 9, 10 and 13). 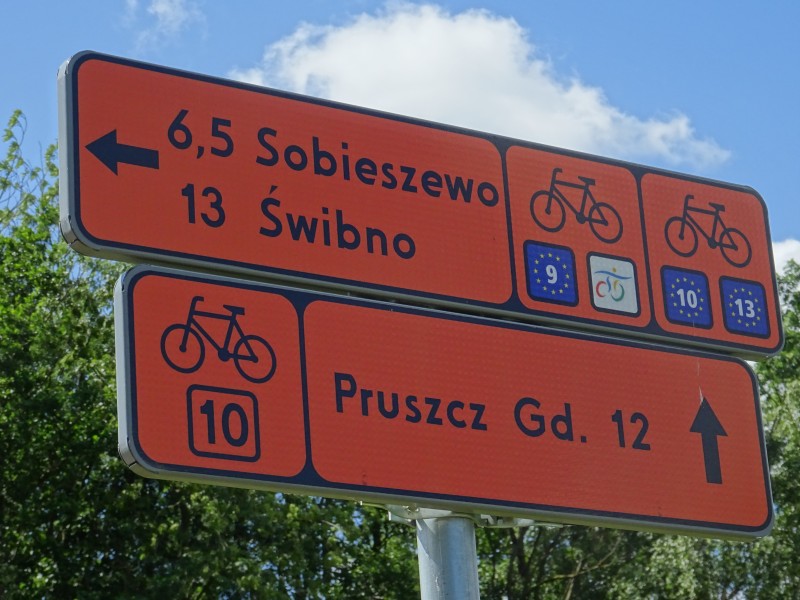 I discovered that EV 10 would take me to my milestone today, Elbląg, so I followed that. It took me to a river crossing, I was unsure if it was worth crossing the river or riding upstream and crossing the bridge – if I crossed the bridge I would still need to cycle around 10 south, as it turned out I had to cycle 7km south to get to the bridge, so I may as well have taken the boat and stuck to the EV route.

Coming into my lunch stop, Nowi Dwor Gdanski, another end of the asphault, as my road stopped in a village. But it was possible to ride over fields using farmer’s roads (around 50% concrete slabs and 50% mud/sand). When I rode into the town it appeared to be quite a nice place, and I sat down for a picnic-bench lunch next to the river. From there it was mostly plain sailing to the city of Elbląg. 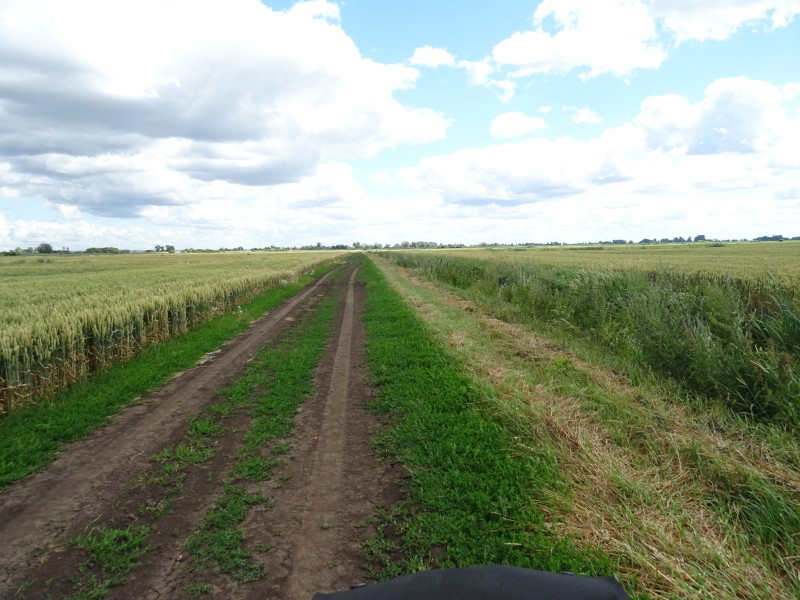 I knew this morning that Elbląg was under 100km, and therefore wouldn’t be my first choice as a destination, but it’s the only city for 200km or so going east on the EV 9, so it might be good to stay in a hotel before hitting the trail tomorrow and riding around the border of Russia. 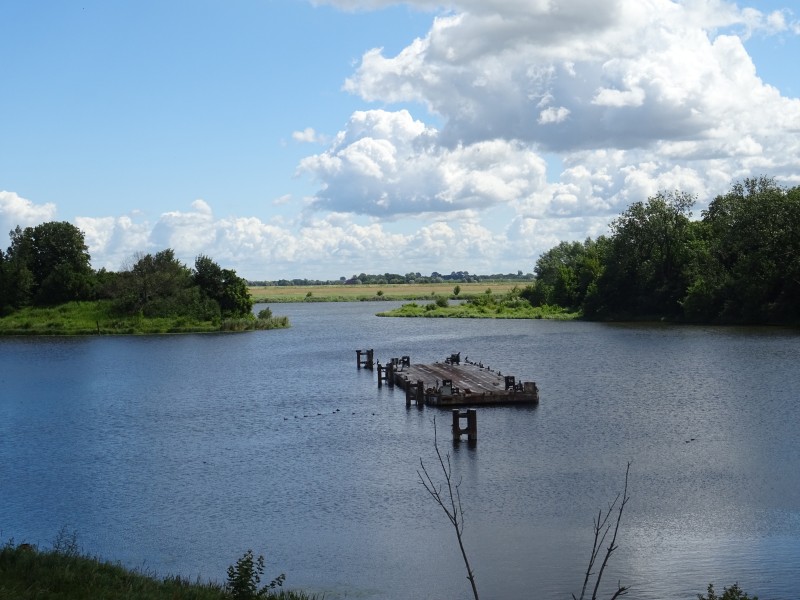 I’m riding around the border of Russia, because Russia has an enclave between Poland and Lithuania - Kaliningrad Oblast. It used to be part of the German Empire (as Königsberg), but was granted to the Russians after World War II. Unfortunately you need a Visa to cross Kaliningrad Oblast, and it’s not easy to obtain, so I will give it a miss, bypassing it means cycling 200km inland, which is fine as I can then cycle into Lithuania and head towards Vilnius.

When I arrived in the city, I checked hotel prices, and also checked the distance to the nearest campsite or hotel on the EV10 route, finally I decided to stay here after only 80km. I had a late start from the hostel (at 10:00) and this city looks worthy of investigation. 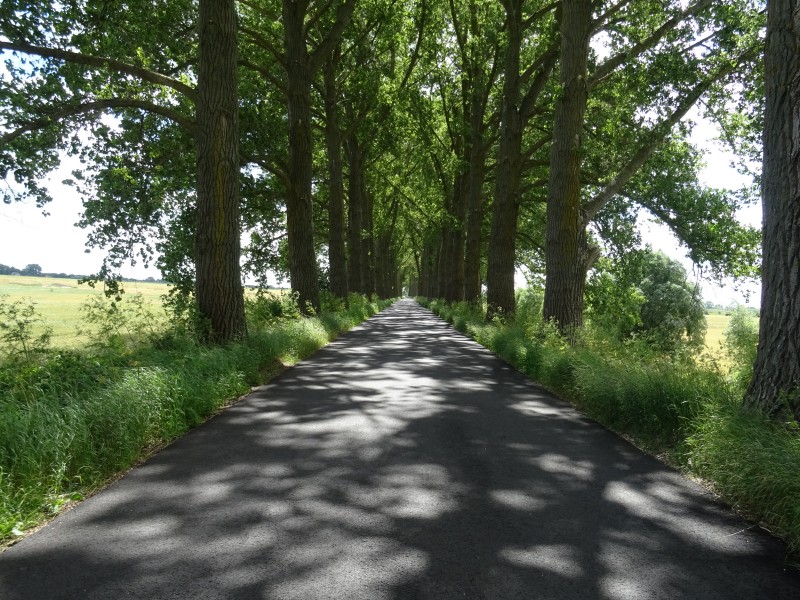 The hotel I found is “no frills” but very clean, and the staff are very nice. After checking in (and leaving my bike in the lobby) I had a shower and went into town and found an Italian Coffee shop, had a coffee and did some work, and then asked where I could buy socks. 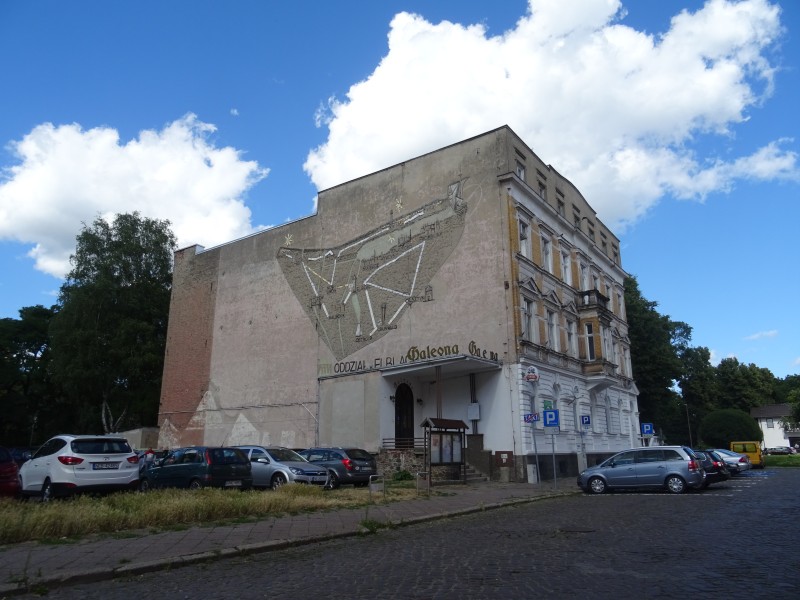 I didn’t think my missing socks (I forgot most of them, and only packed two pairs) would be an issue, but after doing lots of walking, although far from stinky, they are at risk of becoming that way, I will probably do a clothes-wash at some point, but probably not for another week. I found some socks in a supermarket at the recommandation of the waitress. 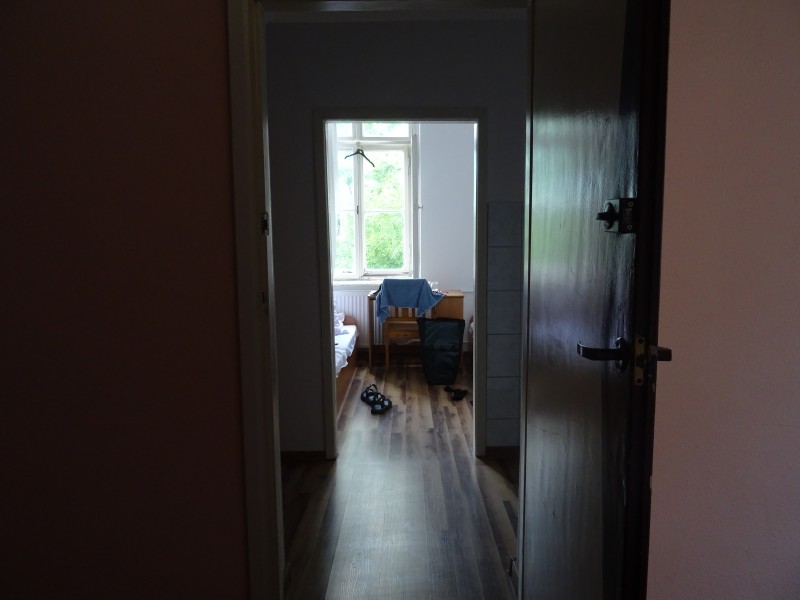 For dinner am now in the hotel’s retaurant - they speak German (most older people can speak at least some German) and I asked for something vegetarian - the old lady looked searchingly into space, and then said “yes, I can prepare a soup, a soup with cream”. The “soup” was actually more like a cold yougurt with boiled eggs and cucumber and other things. But it was fine, to my surprise I was then presented with three huge creps, a dollop of cream and some jam. I would not ask for desert normally, but I looked happy, and dug in to the slightly sickening sweetness, but couldn’t finish everything.

Physically I’m still feeling good, other than being tired. I have sun burn on my shoulders after wearing a vest on the second day, I only realised two days later that simply wearing a shirt would not protect them 100% from the sun, so am now putting some sun lotion on them daily. My lips have dried out, or burnt, or something, and I found myself cycling or walking with my tounge half-sticking as a moisturiser – maybe I should buy some lip balm.

« Bytów to Gdansk
Elbląg to Bartosxyce »