Loud music was pounding on the street, I thought I would wait until 12, maybe it would stop, but I fell asleep before that. In the morning I made my way to the restaurant to see what wonders awaited me. It was a buffet breakfsat, the guy spoke to me in German and asked if I wanted eggs “Speigel Eier oder Rugh Eier” (and yes, I have no clue how to spell or write in German). It wasn’t a particularly good breakfast, what made it not a good breakfast was mainly lack of real coffee - they only had instant.

The bike was safely stowed, I packed my stuff, and then tried to do some research on my route today which would take me into Lithuania. I also purged the Polish lessons on my MP3 player and replaced them with Lithuanian lessons before packing up and going downstairs to fetch my bike.

There were two other bikes in the storage area when I pulled in yesterday, and now they had two people handling them. Two women, I asked which city they were heading two, they said “Kaunas”, I said “me too!”. But our conversation didn’t proceed any further, and I wasn’t even sure where they were from. After securing my gear I left and overtook them with a wave after 10 minutes. 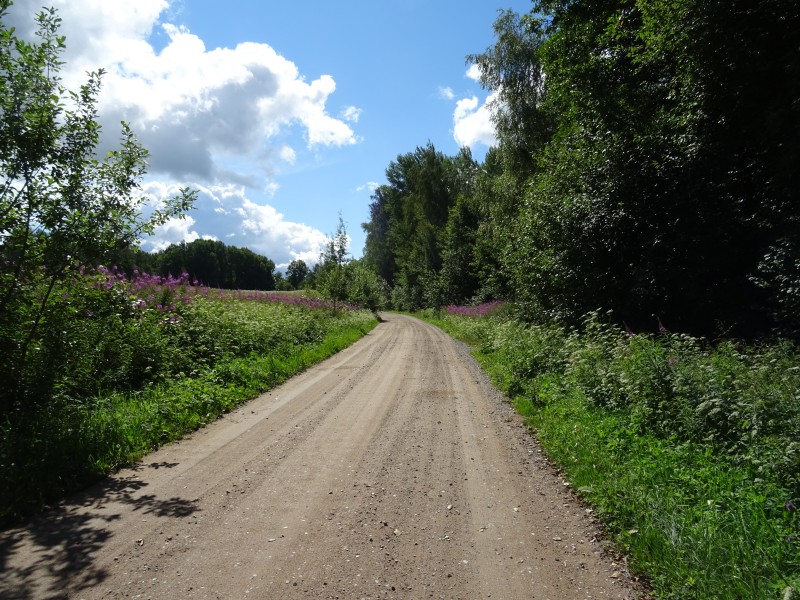 The weather has generally been overclouded for the past days, with intervals of sunshine. There was more sunshine to start with today, and I wondered that I hadn’t suffered much from the sun so far, I had sun burn on my first days from wearing a vest, and my lips are cracked (and I have woken up with blood on them for the past two days), but otherwise I’m good, my feet have been completely unaffected by the suns rays. 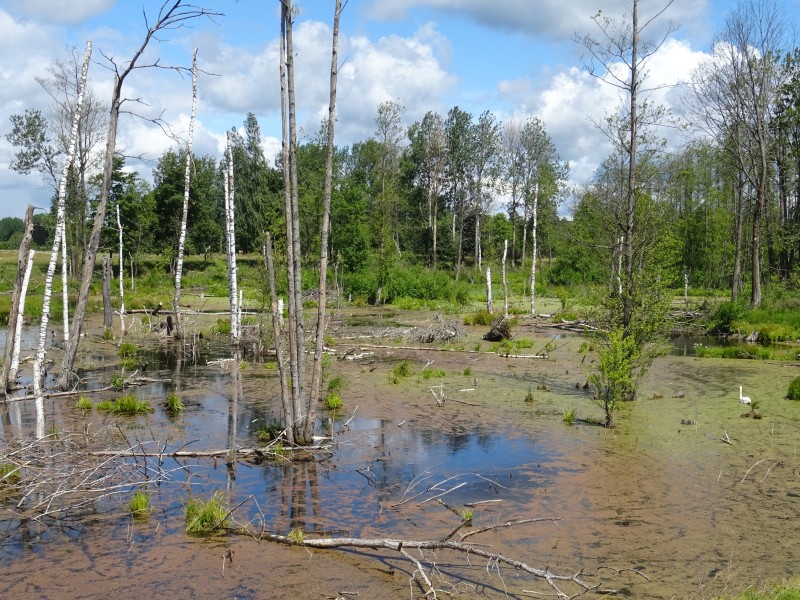 On the road out of Goldap, I again had the choice of riding the GreenVelo route – as I turned onto it I couldn’t help but notice that the main road was far more direct, and that taking the cycle path added another 7-8km. I stopped and struggled to decide: take the boring main road, get somewhere quickly, or take the unknown cycle path, which is longer, probably has an awful road, but would of cource be somewhat safer more interesting. Whenever I’m in doubt, I choose the hard option, and I’m glad I did, it was certainly slower, but was much more pleasant, but after 7-10km when it approached the road again, I took my opportunity to bail and make up some kilometers.

The terrain is getting more hilly, and at one point I was elevated to 300m, and was offered a panoramic view of the land. 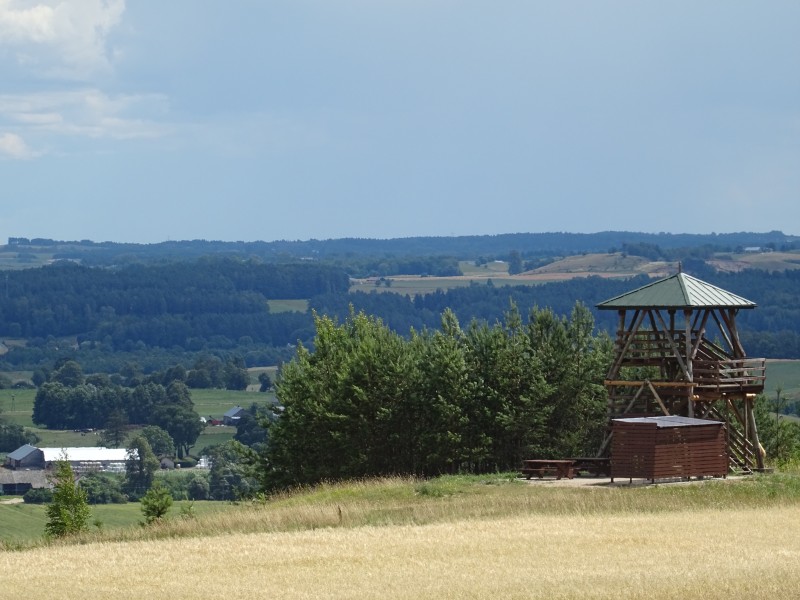 I stopped at a shop and got an energy drink, and, not finding any peanut butter, got some bread and a packet of biscuits, unfortunately I did not have enough Zslotys for the biscuits, which meant that I had successfully spent all my Zslotys, and when I cross the border I can go back to Euros. 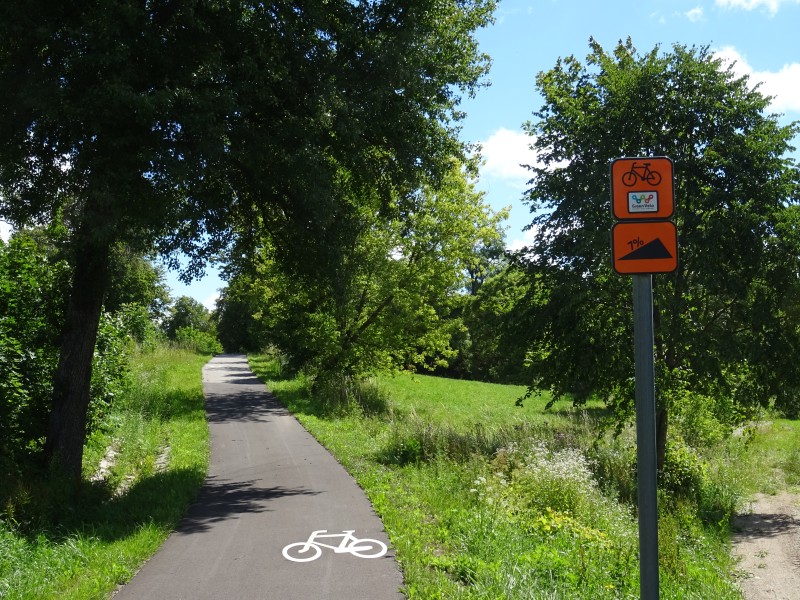 Normally I associate the gradient signs with a mountain, but what you see is all of it

I crossed the border to Lithuania - there was no border station, just an sign with “Republic of Lithuania” surrounded by the stars of the European Union. 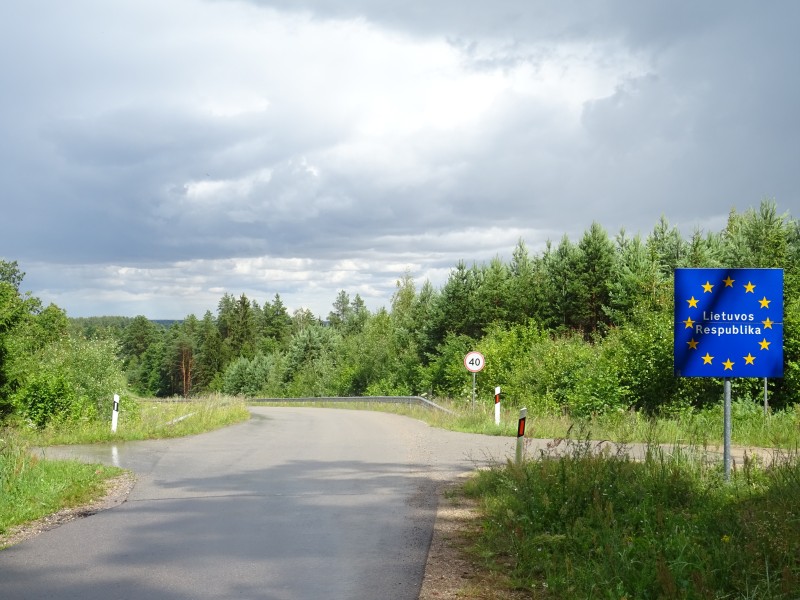 Crossing the border First impression of Lithuania was that it was full of forest, the road signs changed their form, and so did the roads.

I tried to initially avoid the “orange” roads, which seemed to be minor arteries through the country, instead I threaded my way through country roads

Whilst riding over all of this I became concerned about my laptop, which is sitting in my front panier, completely unprotected. Twice so far I have turned it on and it was dead, and required a reboot - which might be related to excessive vibration, so far it is fine, but I am now making an effort to wrap it up in my hoodie to dampen the vibrations. 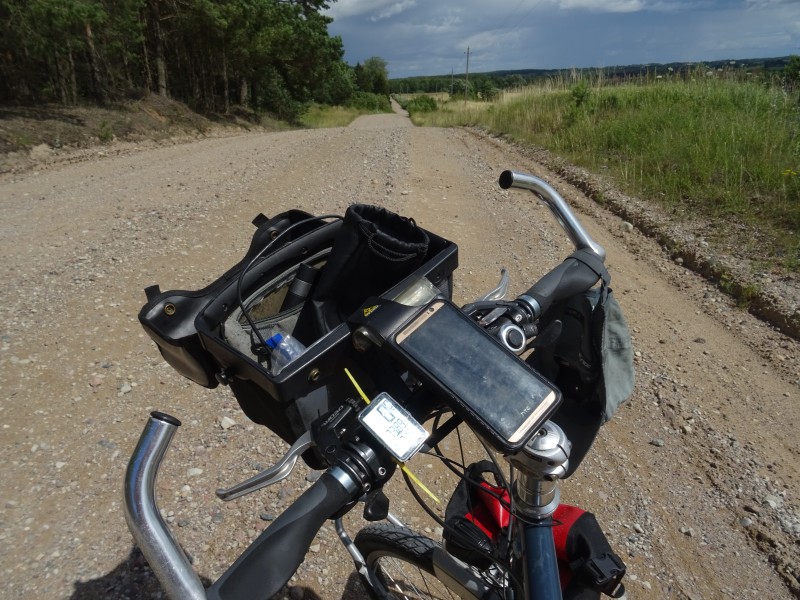 I did my first two Lithuanian lessons, initially it bore some resemblance to Polish, but not so much subsequently, although the sentence structure seems to be the same or similar. Lithianian and Latvian and sibling languages descended from Baltic-Slavic, and they are, according to Wikipedia, the closest living languages to proto-Indo-European (which is the common ancestor of most European languages).

I managed to cover 80k and ride for 5 hours before having lunch. I stopped at a Lithuanian shop, which resembled very much shops I had visited in Slovenia. They had lots of buckets of sweets which you could mix and match. I couldn’t find my peanut butter, so just picked up some sweets and some peanuts then found a bench (after a long passive search) in the next town where I sat down and put some peanuts in some bread, and washed it down with some chocolate sweets.

I then continued, it was only 12km north to my preferred destination, I had quickly researched places to stay on Google, and this place had a campsite, it also had hotels, but they seemed “expensive” on the google search (i.e. the cheapest was €30). When I reached the turning to the campsite I checked the prices again, and realised the last time I had selected “2 Guests”, when selecting “1 Guest” I found the price was actually €15, and decided that fo r that price I could stay in the hotel.

The hotel was about 1.5k from the center, they charged €20 (I guess I should have booked) and they don’t have breakfast. They do however have a guest kitchen, and were able to take my clothes to be washed for €2, and I don’t have any worries about the bike, which is stored securely underneath the stairs.

Lithuania is then cheaper than I thought.

I walked to town for dinner, stopping by a huge supermarket on the way to checkout what they had, and they had no peanut butter. I then continued the remaining 1km to the center, at which point it started raining hard and I ran to the underpass and sheletered as two kids shot past me on their bikes clearly elated to be getting wet. I couldn’t really be too happy about it though. After the main thrust of the rain stopped, I ventured outside placing the panier containing my laptop over my head as a makeshift umbrella.

I found a cafe (as it was still to early to have dinner) and ordered a coffee, and did some laptopping, the cafe also did Pizza, and is evidentally popular hangout for young people. I got a menu, and was happy to see a dedicated vegetarian setion in the menu, which is a welcome change from Poland (assuming this is not exceptional).

On the way back I revisited the supermarket and picked up some mix-and-match chocolates, some cereal, and two of the many new beers which I have never seen before, but when checking the clerk said something like “No beers”. After researching it is illegal to sell beers after 20:00 in Lithuania - then I was confused because it was only 19:30, further research led me to the fact that Lithuania is EET (UTC+2), compared to my watch which is CET (UTC+1). So no beer for me this evening. 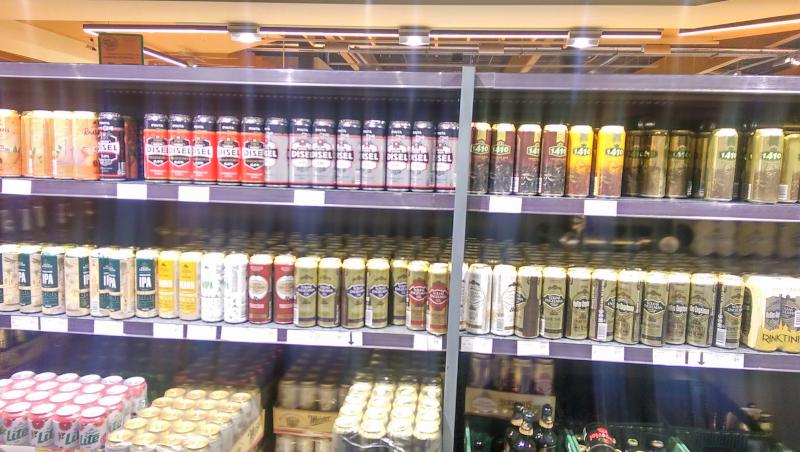 It is 57k taking major roads to the nearest city, Kaunas, or 120k as the bird flies to Vilenus - my next major checkpoint, and potentially a place to take a rest day, but it’s unlikely I can do it in a single day on minor roads, so will investigate further.