Me and another cyclist are the only two people on a large campsite 50km from Vilenus. Coincidentally he has cycled from Tallinn, and is also from Berlin, but is getting the plane back from Vilenus, and we’ll cycle there together tomorrow.

This morning I woke and didn’t feel particularly optimistic about the route today, there was one major road heading directly to Vilenus, and I believed it was not legal to cycle on it. It was raining outside, and I made the mistake of checking the weather, and it was not good for today, or the next day. I considered staying here for another night, but there was not much to do here, so I made the decision to move on.

For breakfast I had envisioned using the hotel “kitchen” to prepare some coffee and make some porridge, but I discovered that they only had a microwave and a fridge, and not even a sink (all the dirty dishes from the night before were left for the staff to collect). The hotel did however have a coffee machine, and I had some chocolates which I had purchased at the supermarket the night before, so I sat and drank a coffee, and ate chocolate and tried to plan my route for today. 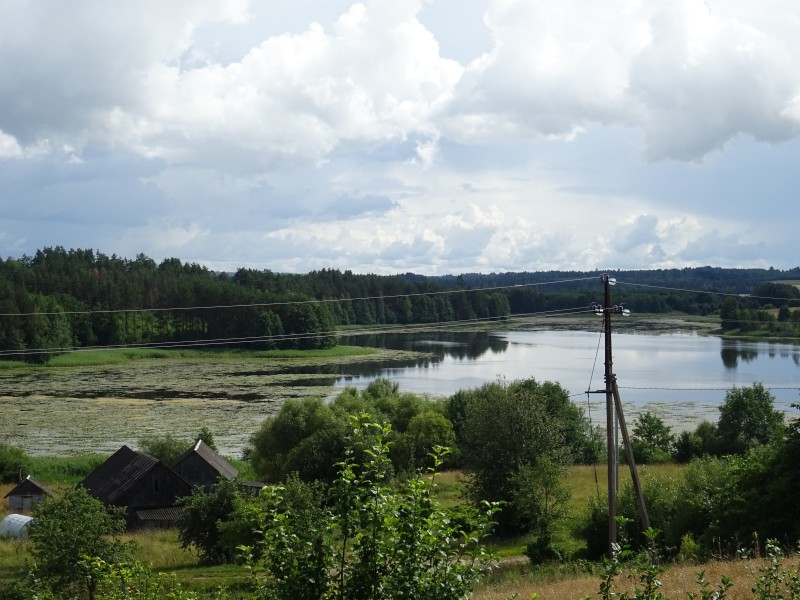 This was not easy. There was a single major road heading all the way to Vilenus (my destination), it didn’t seem possible to do it in a single day, even if I were able to cycle on the major road (and I didn’t think it was legal), so I tried to plan a route using minor roads, but all the minor roads seemed to head up vertically through the country, and none of them horizontally, and none of these vertical lines were connected in a coherent way with even smaller roads, in the end I planned as far as a town, Prienai, 25km to the east and decided to make further decisions when I reached it.

It was already quite late when I left, especially because Lithuania is in another timezone which is 1 hour ahead of Poland (which is CET). So I also conceded that I could take a shorter day today, as the total distance to Vilenus was less than two times my standard daily target of 100km. 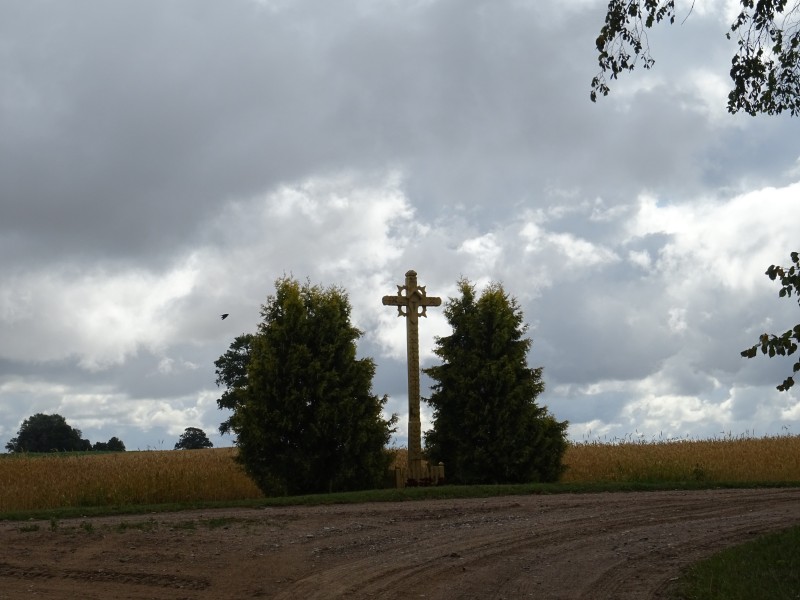 I left the Marijampole, and was soon on the familiar minor gravel roads, weaving my way from one to the other, and then going through farmer roads. It had rained, and what was previously insubstantial, inhibiting, sand, was now puddles of sludge, at one point the road became quite bad. I had to avoid puddles, and avoid the sloppy sand, and try and find something firm enough to propel me forward, trial and error. Sometimes riding through the puddles is better, sometimes not. I rode through one and a good deal of my bike was submerged and it rose again caked in mud, which did the gears no good at all.

This was slow going, and when I finally got back to the gravel I decided to try and stick to the roads. 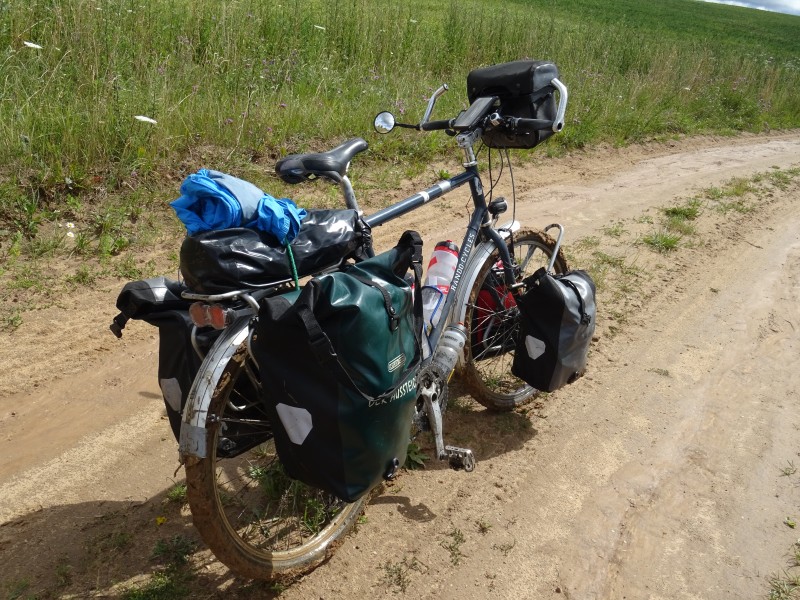 Stuck in the mud

I arrived at Prienai, and was hungry, having only eaten 5 peices of chocolate for breakfast, in the center I saw a coffee / pastry shop, but feeling more like eating something savoury, had a look around town, before deciding that this was the best option and sat down and oreded a coffee and a slice of cake. 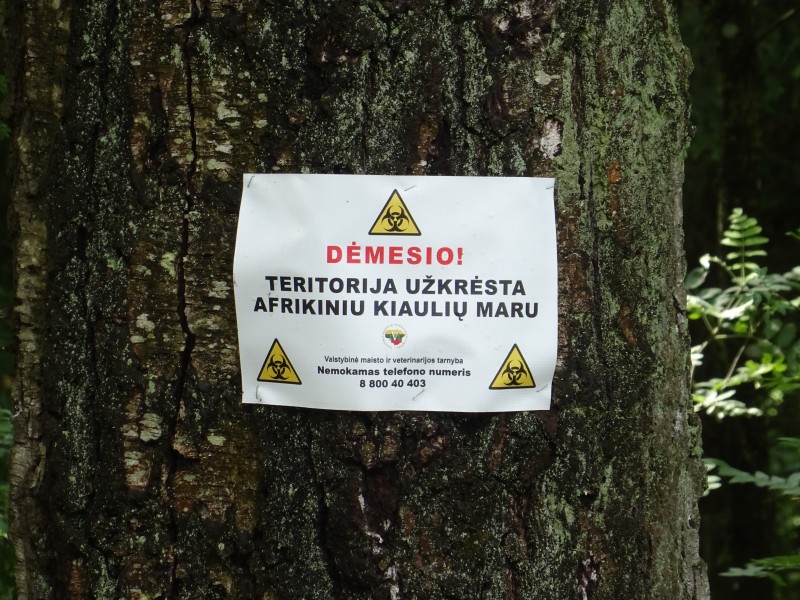 Not sure what this means or if I should be concerned

I resumed my puzzled look as I stared at my map and tried to determine how to ultimatelyt make it to Vilenus, and then where I would spend the night (as it was clear that I wouldn’t make it to the city without doing 20-30k more than I would normally do). It all lead back to the fact that the major road was the only sensible option. There was a minor road which looked promising, but it was cut off by a river, where the only bridge was the major road, or a 20km detour to the north. Then I considered riding the major road.

I googled, if it was possible to cycle this road, but couldn’t find any clear indiciation, only some advice that “It is perfectly possible to take the A road from Vilenus to Riga”, this made me consider for the first time that it wasn’t illegal to use that road, I then asked the woman at the counter in the shop, who deferred me to her husband, “Is it OK to ride with bike?” “Yes, of course, go to Vilenus, just go go go”.

I took the road, it wasn’t busy at all, there were two lanes, and lorry’s would occasionally pass, and ocasionally not give me much space, but if I heard or saw them in my mirror, then I could ride into the gravel on the hard shoulder to let them pass. I was waiting for people to honk their horns at me, but they didn’t, and eventually I saw another touring cyclist ride the other way, and my confidence that I was allowed to ride this road grew, but it wasn’t a comfortable road to ride on.

After 20km on this road, I had the option to take a minor road, but it wouldn’t have helped me towards my destination in a good way, so I decided to carry on for another 25km to a town where a road led off which presented a viable approach to Vilenus, and then I decided that I could just get a hotel there, when I arrived there were no hotels, but there were signs for a campsite, 2km down the road.

I rode into the campsite, and it seemed deserted, eventually I saw some movement and there was a man sweeping the floor of what looked like an eating area, I waved, and indicated that I wanted to camp, he seemed agreeable, and didn;t speak any English, but signed that it was 9 euro, and led me to the reception, where I paid and signed in - the last entry in the registrar was from yesterday, I was the only person on the campsite (and it is relatively large one). 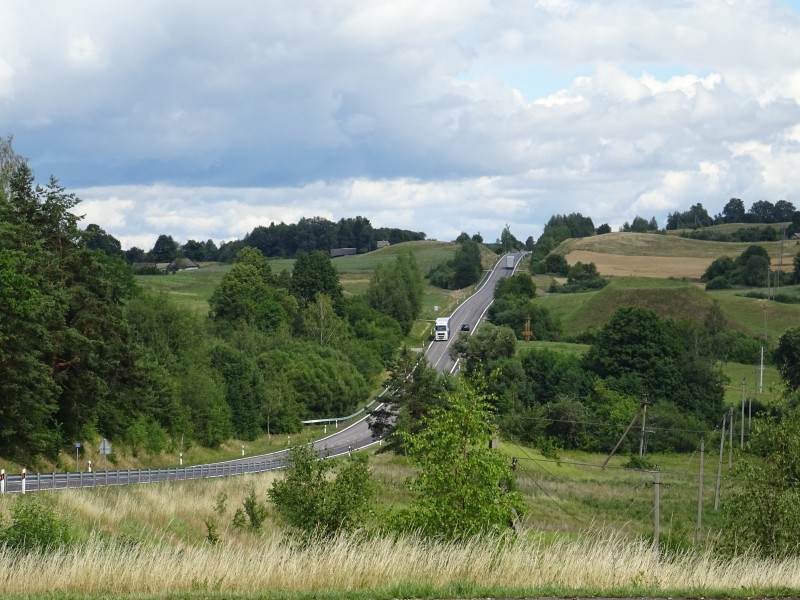 The A Road was not very busy

Another cycle tourer entered the campsite. As mentioned at the beginning, he was also from Berlin and had cycled from Tallinn. We cycled back to town and got some beers, and talked for a few hours. He’s a French teacher, and his English wasn’t as good as his French, and I could speak Frecnch, but my Geramtn is worse than my French, but not as good as my English, and his French was better than my French, so we eneded up talking mostly English using German or French words as required.

I then settled down to write this blog post when the campsite man sat down and started speaking to me. I had the impression earlier that he was from Ukraine, and that after I tried speaking my newly lernt Lithuanian phrases to him, that he possibly didn’t understand Lithuanian. This was clarified when I asked him if he understood in Ukranian using Google Translate. He only spoke Ukranian (and possible Belarussian) and we passed an hour trying to talk to each other with no common language.

Tomorrow I’ll ride to Vilenus with the guy from Berlin, and will try and find a good hostel and have a rest day.