This was the third time camping on this trip, and the third time I had a bad night, and the third time I had blamed my sleeping mattress. On the previous tour I had a “full length” air mattress - a self inflating air mattress that stretched from my head to my feat. This was a perfect mattress, except that it had developed a micro-puncture, which seems to be undetectable (have held it underwater for 10s of minutes and no sign of air release), and after 4 hours of sleep it would deflate and I would wake and not sleep so well. 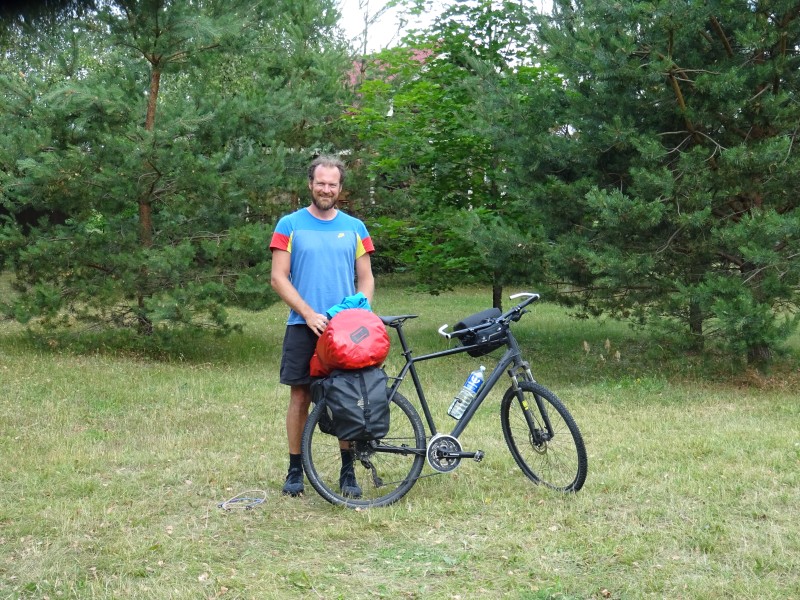 Six years ago I had gotten a “half air mattress” which covered the upper body but left the lower body on the ground – at the time I remembered it as an improvement on my situation - it used 1/4 of the space required by a full size mattress, and, to my memory, was just as comfortable. But now my feet were cold, and I woke after 3 hours of sleep and was not comfortable at all, and a mosquito was circling around the interior of my tent periodically buzzing in my eat until I eventually had the initiative to exterminate it. 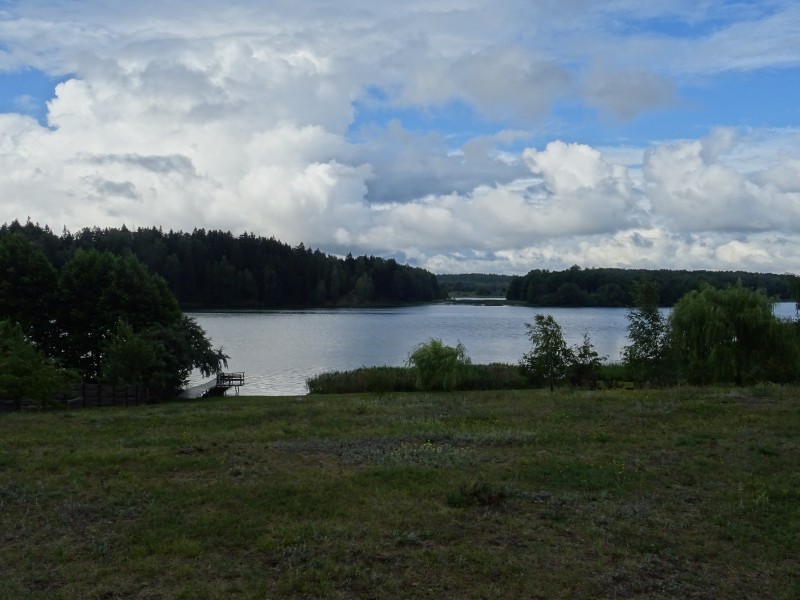 Lake by the campsite

In the morning (when was the morning? I woke at 3am 4:30am, 5:30am, 6am. ..) at 7am I thought it would be a good time to wake, but instead I went back to sleep which was surprisingly easy, waking again at 8am and peeped out of my tent into the campsite and saw Stefan sitting on the bench, and offered a cup of coffee.

I made two coffees and some porridge and read the news on my phone and packed my tent and we left the campsite and rode down the main rode to Trakai. Trakai was around 25km from the campsite, and from Trakai it was aroudn 25hm to Vilnius, and from Trokai we could leave the main road onto a minor road, and in Torkai we could see the most photographed castle in all of Lithuania - the Trokai Castle. We saw the castle and took a photo of it without crossing it’s moat and went back for coffee.

At the coffee place there were a group of motorcyclists and Stefan asked if I understood the language they were speaking, when I paid attention it was a “strange” dialect of German. The south-germans were talkative. 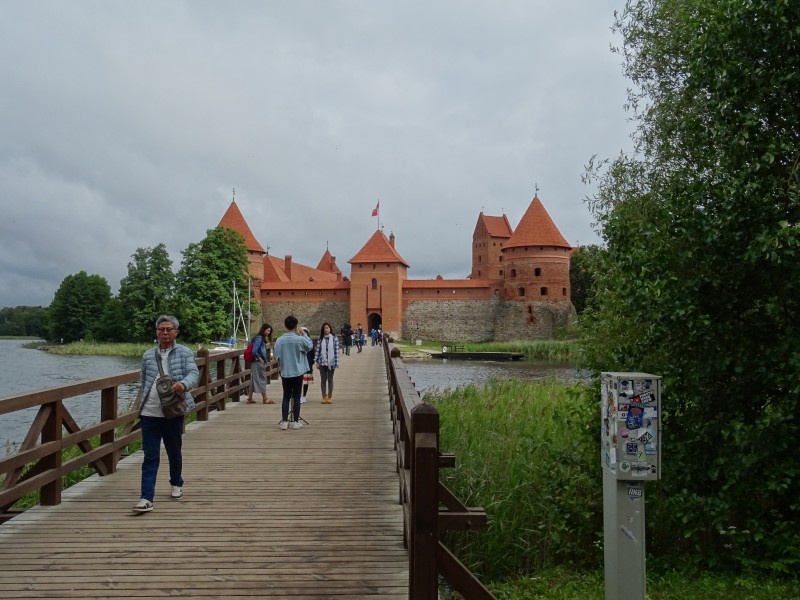 We ordered coffee and pasties (the same as in England, crispy hot pastry with various fillings) and it started raining and I started looking at the internet for good options for a hostel for the night, Stefan had originally planed to stay at the campsite, but decided to give the hostel a chance.

There was no cycling infrastructure entering the city, we had to ride on the bust dual-carriage way, or ride on the pavement, but were able to find a road leading directly to the hostel.

On the way the sky started spitting rain drops, and from the previous days we both knew that this predicted a heavy down pour in around 5 miunutes, I was happy to get wet, wearing only quick-drying clothes and sandals, but Stefan was wearing his only shoes, trainers, which would not dry quickly. We made our way back to the shelter of a door in front of a business enterance in a parking lot, after standing there for 10 minutes a lady came out and asked simply “Coffee?”. I turned around and said “No, it’s stopped raining and I think we can be going now”. In retrospect it would have been better to have accepted, but on leaving we said thankyou for the offer. 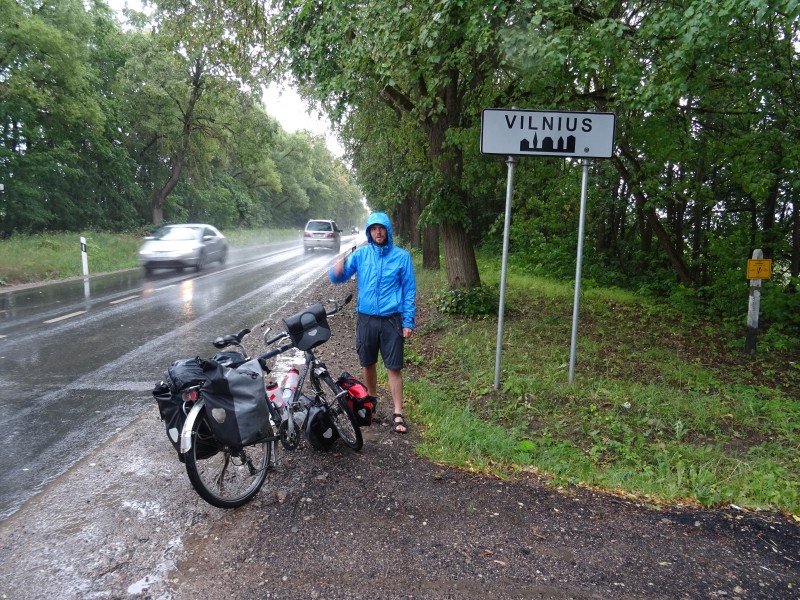 We were looking for the hostel “Hostelgate”, and I the hostel was clearly marked on my map, and we cycled towards it, and then past it, and the got confused and then went back. Stefan noticed that there was a door with “hostel” on the doorbell, but it wasn’t Hostelgate, he buzzed and a man answered and said he would come down and meet us.

The guy was friendly and offered to show us the hostel, we bought the bikes inside the premises and the hostel was clean and good, it small. I had originally checked “Hotelgate” hostel, but it turns out my map was out-of-date, and that the hostel had moved two years ago, and this hostel was subsequently a guest-house, and recently converted back to a hostel, in anycase it’s a good hostel.

After taking as shower and dozing on the bed for an hour we went for a walk in the town, and I went to the museum while Stefan went to the castle and we would meet back at the hostel later.

The museum was huge - there are four “tours”, each which can be purchased separately for €3, I got the whole set for €7 and started the first tour at 4pm. The first tour was the history of Lithuania from the perspective of the ruling classes from pre-historic times to modern. The tour lead onto an air-conditioned interior exhibition of an actual archaeological excavation, with glass paned, raised, walkways leading through the ruins of the destroyed castle. I spent 2 hours walking around tour 1 before closing at 6pm, and I can still use the ticket to visit the other 3 tours. 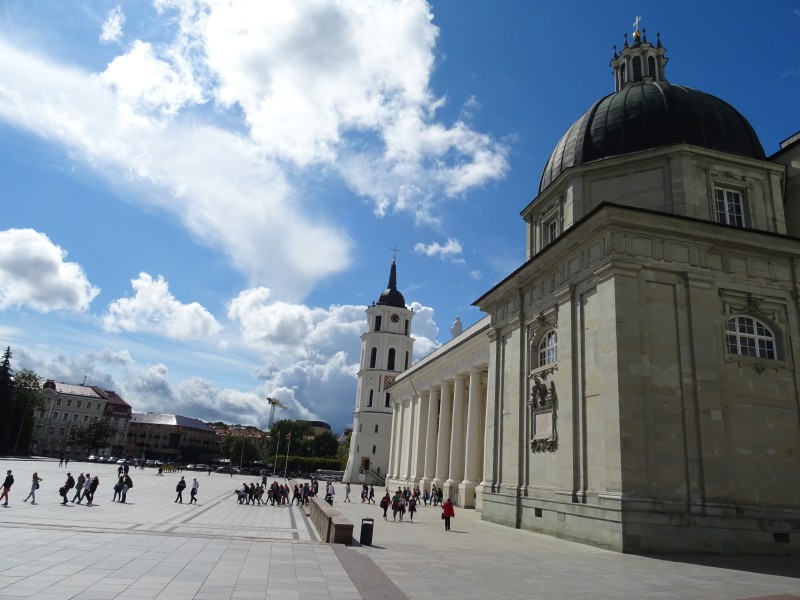 As I was leaving the museum I got a text message from Stefan, from an hour back, saying that for some reason we had each-others keys for the padlocks to our lockers. When I got back to the hostel we went out to get something to eat, eventually ending up in the place the hostel guy had recommend, they didn’t have much in the way of vegetarian food, and I had a “traditional cold beetroot soup” followed by “4 potato pancakes with mayonnaise”, then we had several more beers.

On returning to the hostel, we met the other two inhabitants of our 4 bed room who were from Brazil, one of which was a geologist and presented his theory on why there was so much bloody sand in northern Poland and Lithuania.

And now it is 2:45am and I still need to upload the photos and publish this blog post.