The campsite is almost empty and again it’s a big one sponsered by the EU. When I arrived at 18:00 it was empty and I thought it was closed, but I took the phone number anyway and went to the next campsite on my map 3km down the road, on arriving there I passed what seemed to be a deer enclosure and there was a huge stag sitting in the middle of it. There were lots of people at this place, it seemed like a recreation area, and the campsite was full and I could hear the “thump thump thump” of club music. I didn’t like this, and thought I would ring the other campsite, someone picked up and said they would be there in one minute. When I arrived there were already 4 cars in the parking area, just 20 minutes after I had first arrived. The campsite cost €4 and the guy who was managing it told me there was a shop just around the corned and I picked up some beers. 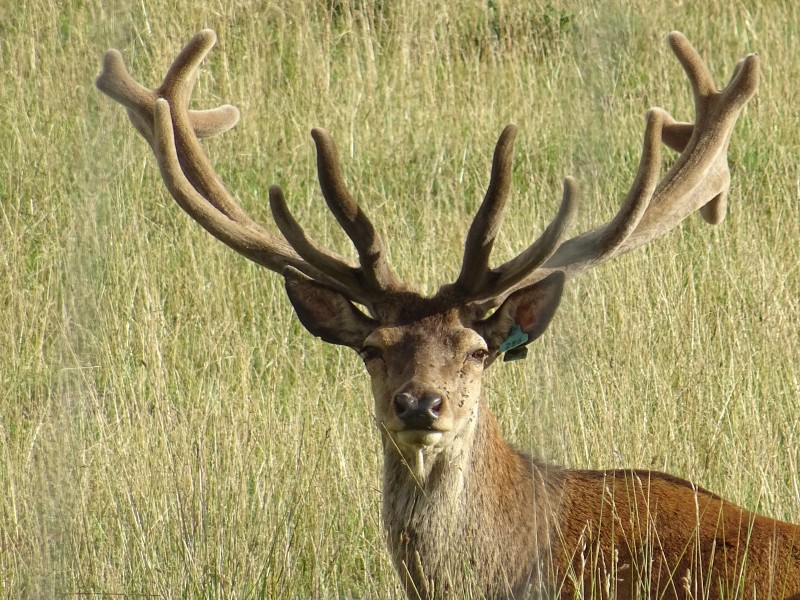 This morning I woke up in the dormitory after a good nights sleep and went down to the kitchen where the hostel guy was making croissants, and the old korean was sitting at the table. He complained jokingly that the hostel guy was chucking him out on the street “He put me out on the street, and old guy like me” “I found you a room in another hostel!, we are fully booked” “On the street!” the Korean said with a grin.

I waited for the croissants and Stefan joined and I packed my stuff and said thanks to the hostel guy, he was a very sympatic man and obvsiously enjoyed what he was doing, and I think he also ran a bigger hostel in town.

It was good to meet Stefan, who was now going to fly back to Berlin. He is an experienced cycle tourer, and his first tour was riding across Africa when he was 19, and has done a dozen since, both alone and with friends. We had developed many of the same habits with regards to touring, and it was good to chat, and I expect I’ll see him again in Berlin.

Vilnius is quite a big city and it took some time to weave my way out of it and make my way north. There was a head wind for the first time, although not very strong, strong enough to contiually rush past my ears and distrurb my music.

The weather forcast was also good for today, and although the clounds looked primed to yield rain in the morning, they didn’t and it was the sunniest day for a week, although by far cooler than the first day.

I planned to follow the minor road to Utena - a place where I had assumed I could find accomodation. I read that it was increasingly popular with tourists (and the other sobreing thing that Wikipedia said about the town was that 2,000 jews were rounded up and shot uner the Nazis during World War II). 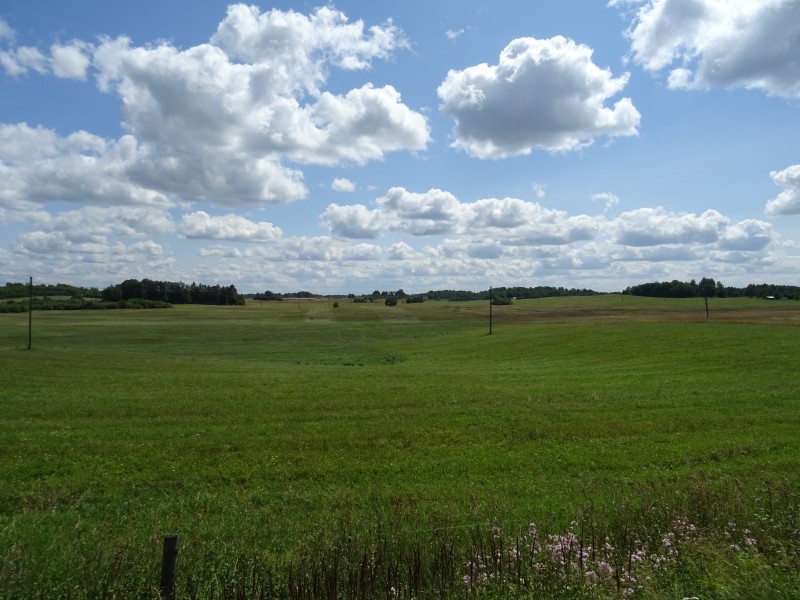 The major A road, was under construction however, so the minor road had much more traffic initially than I had expected, but as I passed a few junctions most traffic left the road, and soon it was quiet.

The road didn’t go all the way to Utena, and I had to cut across some country and forest roads. The country side was very peaceful and rich, and there was the constant sound of Cicadas in the long grass.

For lunch I thought I would stop in the town of Molėtai, and I went to the supermarket and picked up some bread and a drink, and then carried on looking for a bench, but I left the town without finding one. About 5km later I found a lonely bus stop, and had a picnic there. 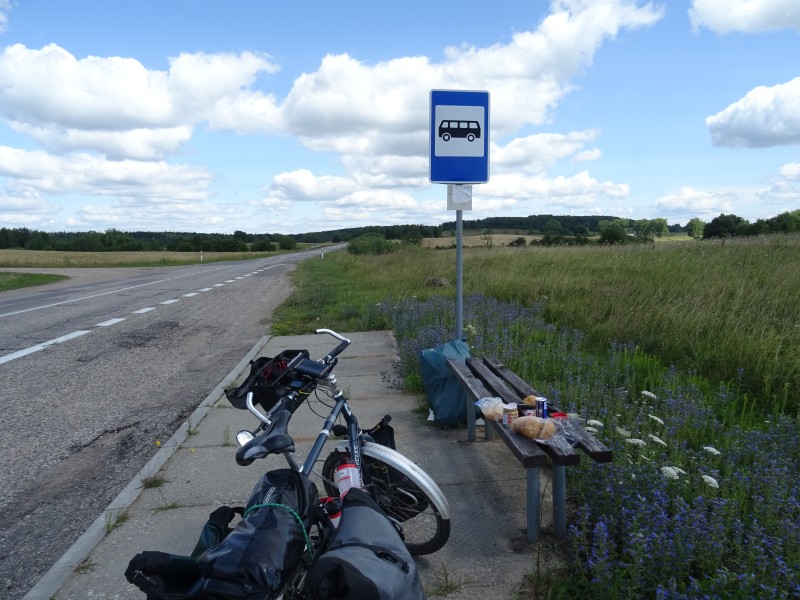 Arriving in Utena I headed to what I assumed was a “hotel”, but when I arrived it was a guest house, and cost €35 (I didn’t speak to anybody, but checked on the internet). I had assumed there was a hostel here, and failing that some hotels, but there was nothing, only more expensive guest houses (2 of them). Looking at the map I saw a campsite 10km further on and left Utena.

So as mentioned at the beginning, it was empty I checked out the other campsite didn’t like it and came back. 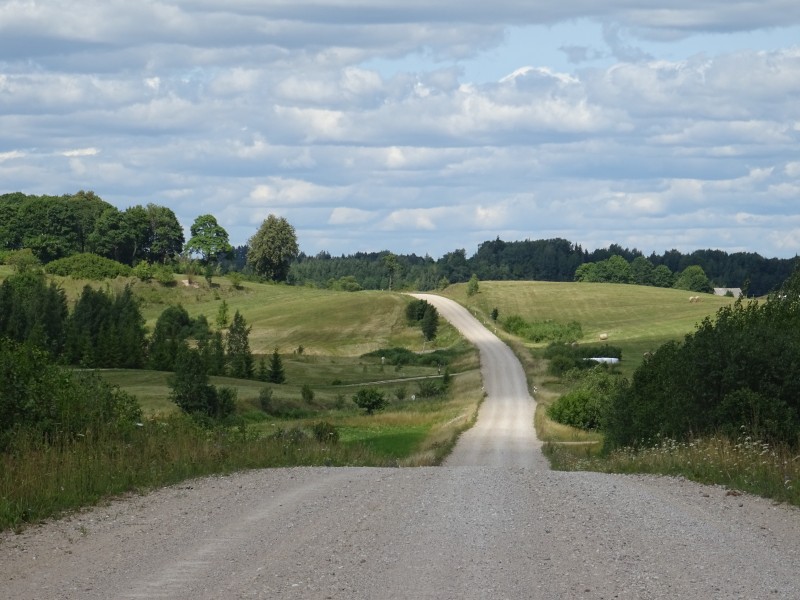 Whilst writing this blog post a couple has setup 20m from my tent.

This is likely my last night in Lithuania, depending on if I head north or north-west, my next checkpoint is the capital of Latvia which is about another 200k from here depending on the route.

My language learning is not going to well, I haven’t managed to use anything I have learnt in the wild, only saying “Achu” occasionally, but then it often feels better to offer full disclosure and say “Thankyou”. Latvia is related to Lithuanian, but the hostel guy said that they Lithuanians and Latvians could not understand one another, and the words for “hello”, “goodbye” and (I think) “thankyou” are different, so it will be back to square one. 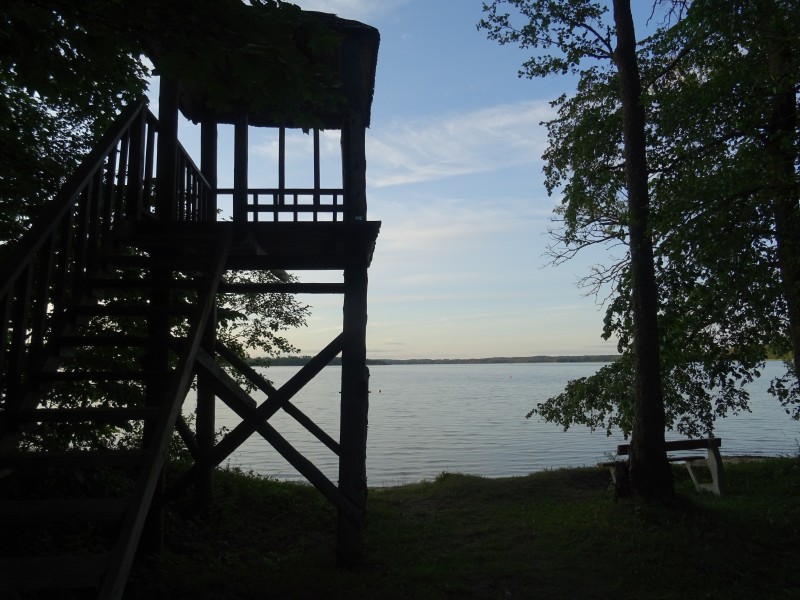 Lake about 50m from my tent