As normal I slept not to well on the campsite, but woke up at 06:00 and made breakfast (coffee, porridge, and some pastry things I found in a shop) and was out on the road at around 08:00 heading to the Latvian border.

It looked to be another sunny day, yesterday I had worn my vest for the first time since being burnt over a week ago, and was annoyed that I had burnt again in the same place, I sprayed some sun lotion on to my back and put on my shirt instead of the vest.

I headed north-north-east passing lots of lakes including the town of Dusetos, making my way 50km to the Latvian border where I crossed to the Latvian town of Subate. It was now 11:30, and I pulled off the main road and cycled to the center of the village, found the (super)market and purchased a beer and some peanuts, before sitting down on a bench in the nice green square and making lunch (hard cheese blocks in dark bread pasted with peanuts peanut butter to hold the peanuts in place). I also got some chocolates which was dangerous as all 6 were quickly dispatched and I decided buying chocolates is always a bad idea. 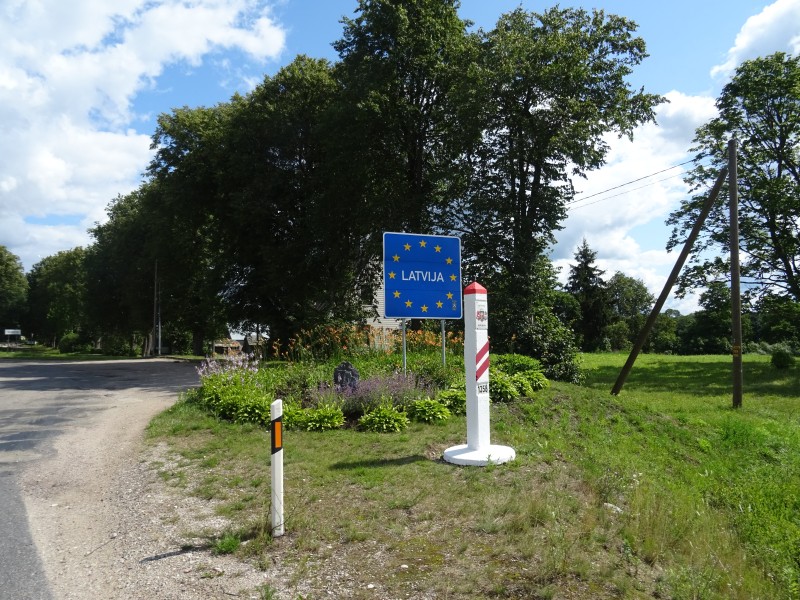 I idly looked up the Wikipedia for what now seems to be a village, it used to be a larger settlement of around 2,300 people in 1914, now it has only 940, it’s entire Jewish population was murdered during WW II.

I had an option in around 10km of either turning west and finding a place to stay in the 2nd biggest city in Latvia, Daugavpils, which would have made around 100km, but I decided against it when I couldn’t see any affordable accommodation, and decided instead to head towards Riga and build up some more spare days.

After passing the point of no return I listed to an audiobook, I thought I had “Bill Brysons Short History of almost Everything”, but instead I had Howard Zinn’s “A Peoples History of the United States” and I spent 4 hours listening to 4 chapters: How women were oppressed, How the Indian lands were taken, The Mexican War (invading Mexico), and a chapter about the abolition of Slavery and the civil war, but to be honest my concentration was waning at this point. But it passed a great deal of time. 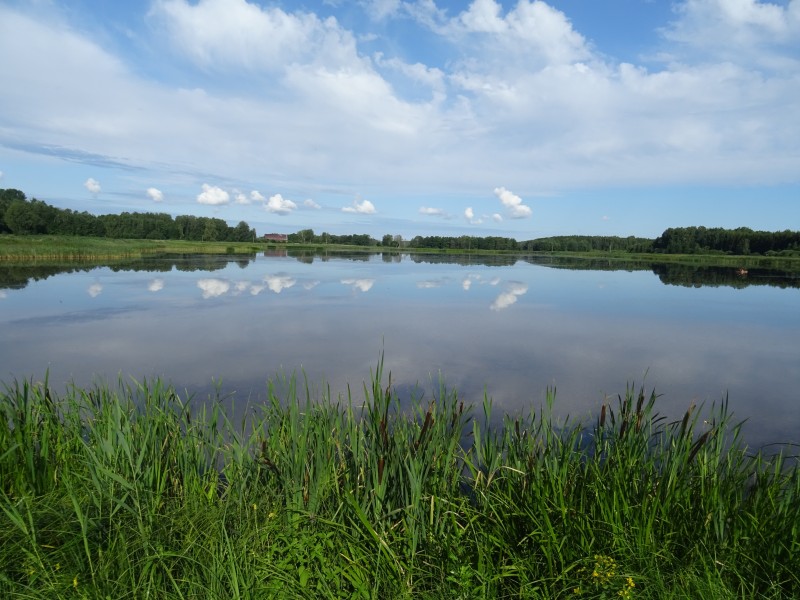 Lots of lakes around these parts

It wasn’t at all clear where I would rest tonight, Jekabpils was the logical place a largish city, at around 130km, but there didn’t seem to be any accommodation or camping there. If I couldn’t find any accommodation there then there was a town 15km further on which ostensibly offered a campsite and some motels.

The road today was extremely flat after some initial hills, passing into Latvia I noticed a number of what I guess are nuclear bomb shelters in peoples gardens. 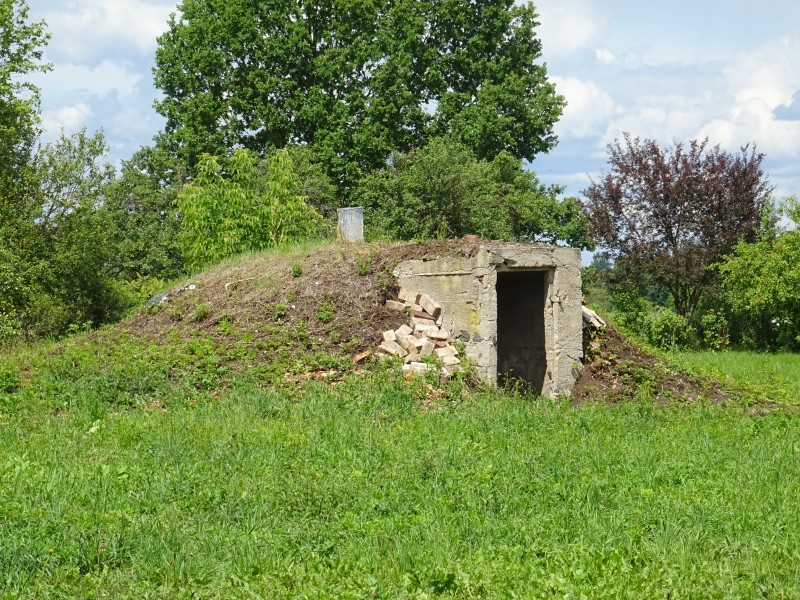 One of three back-garden bomb shelters I saw today

The road was mainly surrounded by forests, at one point this changed to a massive clearing of freshly dug earth, it looked as if an enormous amount of forest had been cleared and the earth turned over. 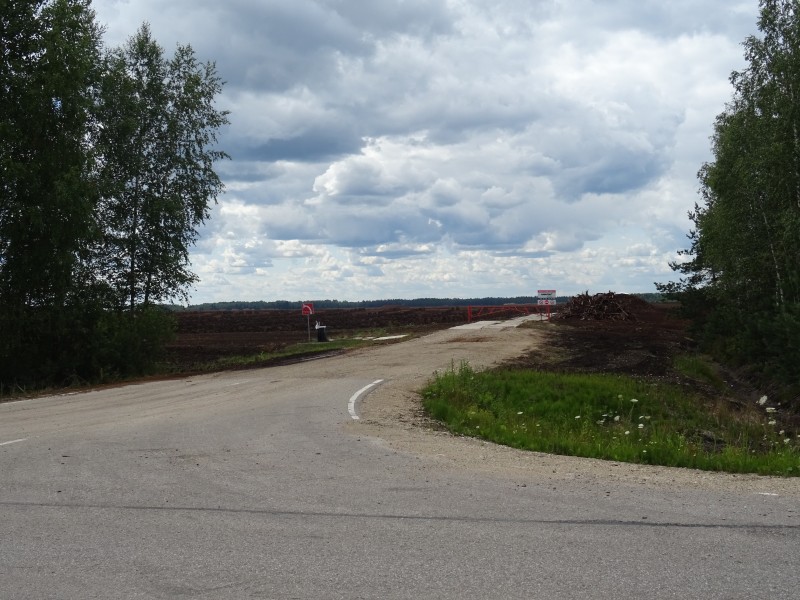 I passed through Jekabpils without seeing any accommodation (I did see a Motel on the way out, but it was on the wrong side of the road, and anyway it was raining and somehow I had already decide to ride to the next town). It started raining and I hit a main road to Riga.

There was no other option that to take the two lane road with it’s traffic and lorries. Unfortunately there are no asphalt hard-shoulders in either Latvia or Lithuania (possibly also Poland) only gravel which is not fun to cycle on, and possibly even dangerous if attempting to pass over it at speed. This is where my mirror comes in handy, and with constant attention I can ride on to the hard shoulder when big lorries burn past without risking a close shave.

Around this time my phone battery died, but the way seemed clear enough in my memory and I crossed a bridge and turned left, following the lake that the town of Plavinas lives on, and started looking for the hotel. Without my phone’s GPS I wasn’t sure exactly where I was going, and I asked a local, who happened to be a kid of around 14, and he spoke English and was able to respond to my question negatively when I asked him if there was a Hotel in either direction. 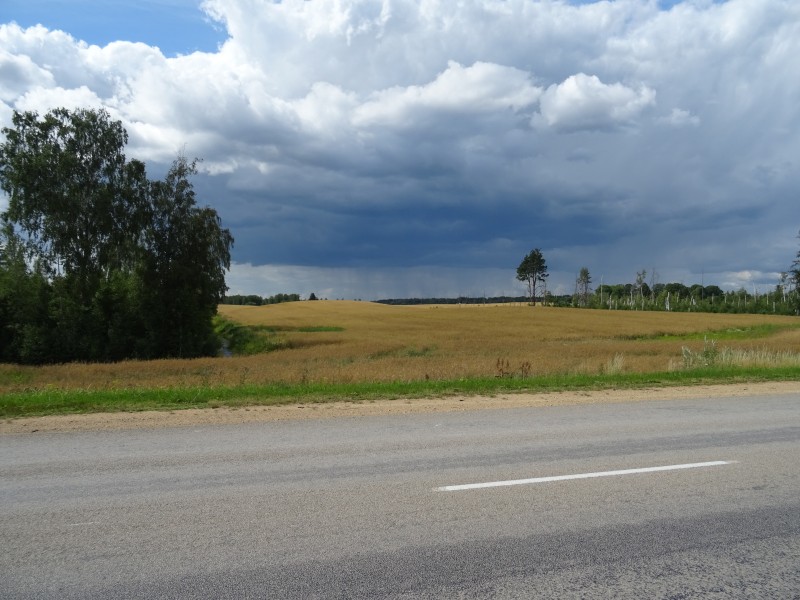 I carried on down the road, and went to the effort of connecting my phone to a battery and found the Motel I had seen on it in the morning, I headed to it, but couldn’t see any motel, then looking around more closely there was a dirty house with “Motels” written on it, but it didn’t look like anybody was home and I might find a better place later so I continued, there was another Motel and then the campsite.

The next Motel also looked empty, there were no cars out front, and I could see no movement or lights (although it was day). I pulled up, there was a bar building on the left, and the “Motel” on the right. I tried the door to the motel, it was open, and I went upstairs, and said “Hello?” but there were only rooms. When I came back down there was a lady that had appeared from the bar “Do you speak English?” she shook her head and beckoned me to follow.

The lady knew a few words of German, and assumed that I was German, and was surprised that I was English when she checked my passport. She’s a little strange, but very accommodating and she ensured that my bike was secure and inside (she wouldn’t let me leave it in the car park locked up). She called my “Thomas” for a good while, which was fine, until she asked if that was my name, and I said “Daniel, but Thomas is also fine!”.

She later entered the bar holding her cat “Daniel!” (she starts most sentences addressing me with either “Thomas!” or, now, “Daniel!”) This is my cat, tiger" (or similar).

The room is quite expensive, €38, including breakfast. I had hoped to pay more in the line of €20, and I probably wouldn’t have stopped if I had known the price (the campsite should be just another 100m down the road). But it’s fine, I only paid €4 for the campsite last night and the breakfast should be good for the push tomorrow to Riga.

After crashing out for an hour, I came down to the bar and ordered dinner - explaining that I was vegetarian, I was going to order chips and cheese, but instead the lady recommended dumplings. In the end I had dumplings with mayonnaise, a beer, and some bread.

I will stay at least 2 nights in Riga, the length of time I spend depends on how much I like the hostel (assuming I find one), I would be quite happy to spend a bit more time there if it’s good.

My bum is sore to the point approaching uncomfortability for the first time, perhaps it’s the accumulation of the past two weeks, or just doing two 8 hour days back-to-back.