The road suddenly changed from a very smooth asphalt road to the worst kind of gravel road, and showed no sign of stopping. Potentially running for the remaining 50k to Riga, cars would drive past kicking dirt into the air which would sting my eyes and force me to angle my cap down to avert the dust, which consequently meant my field of vision was restricted to what was immediately in front of me.

The two energy drinks I had forced my temper to break at a couple of points I was shouting angrily at the road. It was the third long day in a row and sometimes I regretted making it so. I had the option this morning of riding all the way to Riga on the primary road, a total distance of around 100km, but I had assumed it would be too busy, and perhaps boring. My alternate route would rejoin the (planned) EuroVelo route, but required trekking back 5km to the turning, then heading 20km North, before “resuming” my journey west to Riga. But finally I’m glad I did, it was almost certainly more interesting than riding 100km primary route (even if it was Sunday and there was not much traffic). 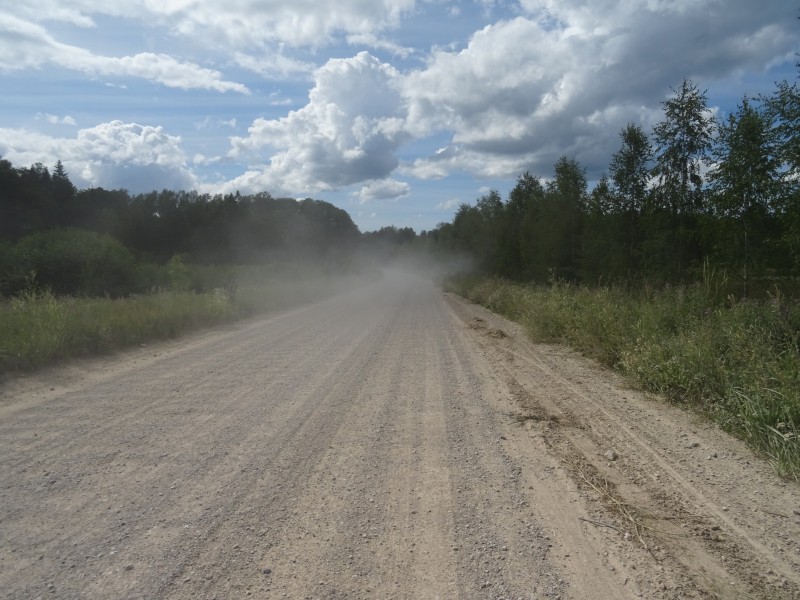 The slightly zany lady at the hotel prepared my breakfast, but I don’t think she understood me when I told her I was vegetarian the previous night, or she had forgotten, as she brought out a plate with two large boiled sausages, with gherkin, tomatoes and cheese, with bread, jam, honey, butter, and a yoghurt. I did my best to eat everything but the sausages, but it was too much, and when she brought out another 4 slices of cheese I tried to say no, but she assumed I was being polite, and that I really did want the cheese. 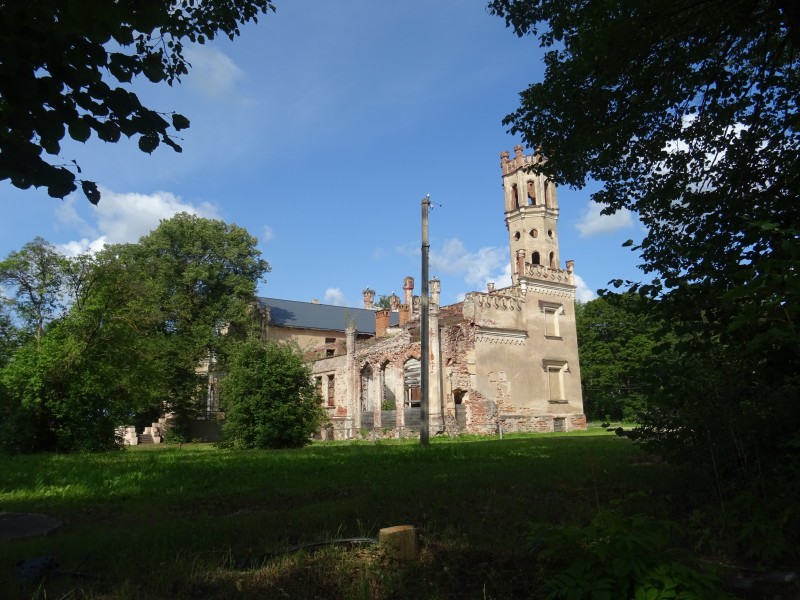 Some other guests (possibly family) were having breakfast, and the lady used them to translate to me “Daniel! (speaking in Latvian, or Russian) - “You can stay in your room until 12” and so on, last night she was switching to another level of conversation by asking if such-and-such was the right word in German (“Setzen sich” oder “Setzen!” “Setzen ist Richtig?” and she was even writing down some phrases and used my phone to translate if I wanted herbs on my dinner. He name, I found out eventually, was Kristi, and I said goodbye and thank you as I cycled back up to take my alternate route to Riga. 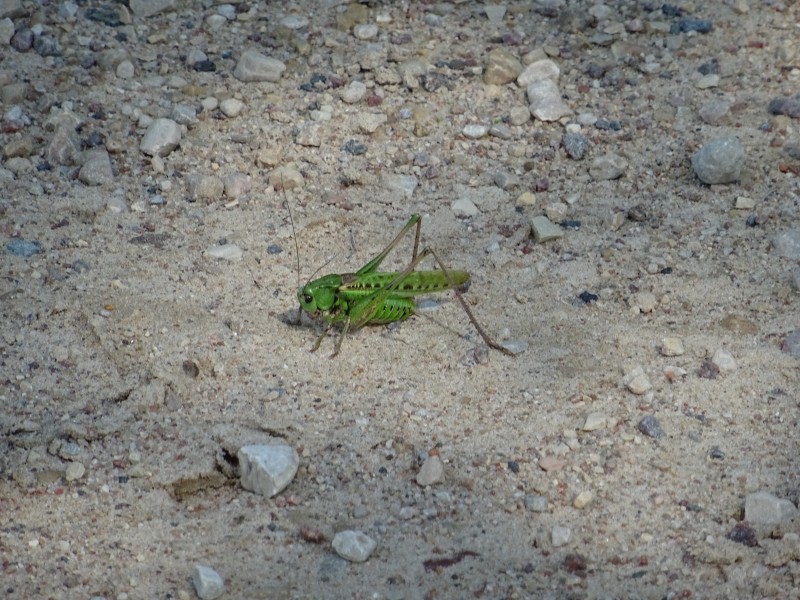 Today again I spent lots of time listening to Howard Zinn’s book. Today was about the organization of Labour movements from in the 19th century, the Spanish-American war and subsequent American empire building in the Philippines. Each chapter is around 2h, and there are at least 22 of them.

The route was particularly picturesque today, I passed through a few isolated villages, and an industrial area that nature was reclaiming, and often the road was very smooth and from a small altitude you could see a landscape of boundless forest. 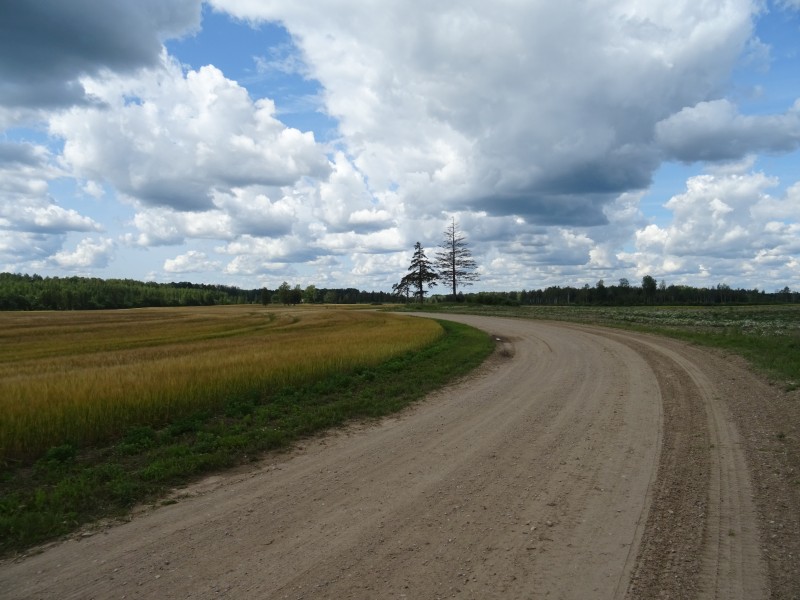 There was a headwind, as I was now cycling into the great wind which had propelled me from Berlin, but it was not to severe, however at one point I did question why I was struggling to maintain 20km on a flat (according to my altimeter), even with the wind didn’t seem strong enough to account for it, I thought to check my rear brakes.

I picked up the rear of the bike by the seat and kicked the wheel to spin it with my foot - as I suspected it moved but then stopped: the brake was in contact with the wheel. I adjusted the brake to give it more power to pull back from the wheel, and also lubricated it. My gears have been very stiff recently also, and I also lubricated the place where the cables pass under the drive, and that made them easier to change, and the bike seemed a bit faster now. 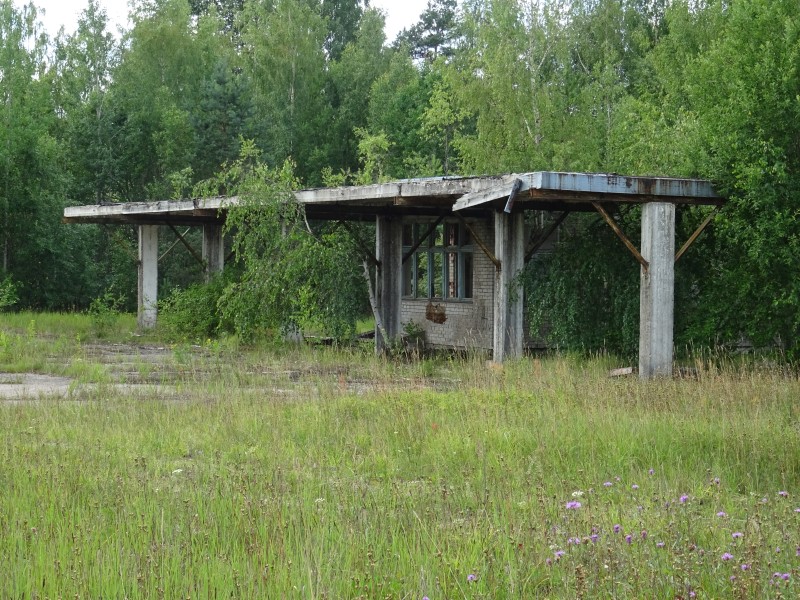 I had a couple of energy drinks today, one more than normal, and felt a bit high, and then irritable, especially when my bike ran over the ruts in the bad road vibrating everything violently and the cars drove past followed by plumes of dust blinding me. One energy drink is fine, two is too much for me, like beer.

The approach to Riga reminded me of the approach to Vilnius - just a big road for 3-5km where I tried to stay on the pavement, the hostel was easy to find, which is just as well, as my phone’s internet ran out of internet without warning today. 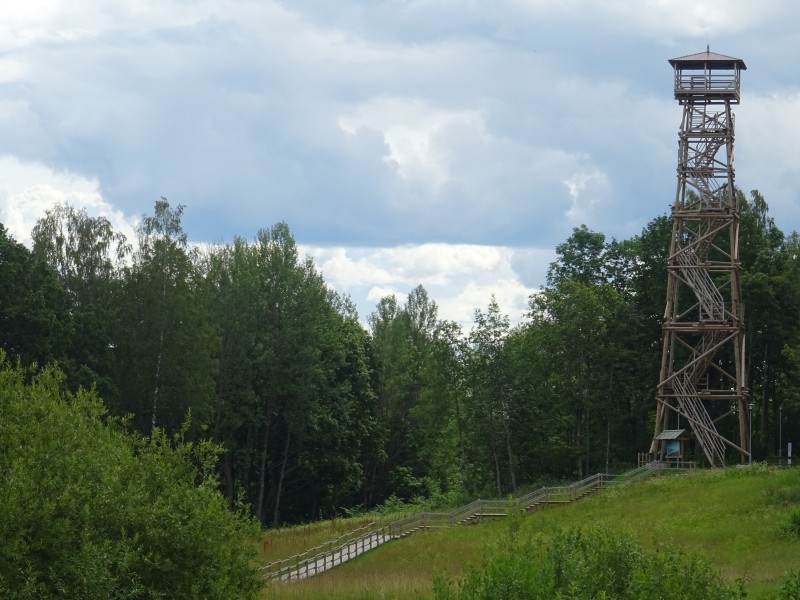 This was annoying – I had received no text at all when I crossed any border, and no text when I had used, f.e. 80% of my allowance, and only a text when it was all gone and with no apparent suggestion on how I can get more. Fucking useless.

I was approaching the hostel but could only see a McDonald’s, on closed inspection the McDonald’s also had about 10 placards on either side of the door, about 5 of these were hostels, and one of them mine. I expect they are all owned by the same person. I wheeled my bike awkwardly through McDonald’s, through a door on the opposite side, my hostel was on the 3rd floor, so I de-mobilised my bike and took my phone and laptop bag and ran up 3 flights of stairs, rang the buzzer, was invited in but then I said “I have a bike”, “Oh, well, we don’t have much room, but I think we can..” “OK, then, I go get it!” and I ran down the stairs and then back up with my mostly laden bike and a few unnecessary grunts as I struggled carrying the heavy thing up all the stairs.

There were around 6 people sitting in the central common area, the beds look very good and solid, there are “pancakes” for breakfast, beer is taken on a trust system, where you tally your beers with a pen (but then each costs a whole €2, and there is an off license downstairs selling beers for €1), and tonight there is a free vegetarian lasagna - it’s being served in 5 minutes, but I’m not in the hostel, I went for a walk to find a pizza and a beer in order to write this blog post.

So far Riga is not the cheapest place, the Pizza I just had is probably one the cheaper places, and it cost €8, and the beer €3.50 - more or as expensive as Berlin, but I guess this is the tourist area.

It is now only 3 days by primary road to Tallinn - the planned end of the tour, and I am now 2 weeks in and have 2 weeks left - so I might stay in either or both Riga and Tallinn for longer periods (and also perhaps take a more scenic route to Tallinn, but this could only add a day or two).