At the hotel I settled down with a few beers and Series 8 of of Game of Thrones, I hadn’t watched it up until this point despite being, like most other people, a big fan of the earlier seasons, but it had got progressively worse and I predicted this, the final, series would be mediocre, it wasn’t great, but none-the-less still intriguing enough that I watched 4 episodes back to back.

I woke up relatively late and had the included buffet breakfast, accidentally picking up a splodge of what I assumed to be a vegetarian-friendly, mayonaised salad, but then realising with some regret that I was eating some kind of meat. The rest of the breakfast was standard cheese, cucumber, cereal, coffee etc.

I picked up my bike which was locked in the shed, the chain and gears had suffered with the rain and sand, with rust showing on the, now dry, de-lubricated chain. I washed it down with some water and sprayed lubricant on it then left, heading directly to Valka/Valga, the twin towns on the border of Latvia and Estonia, which was around 80-90km north-east. I left at around 10am. 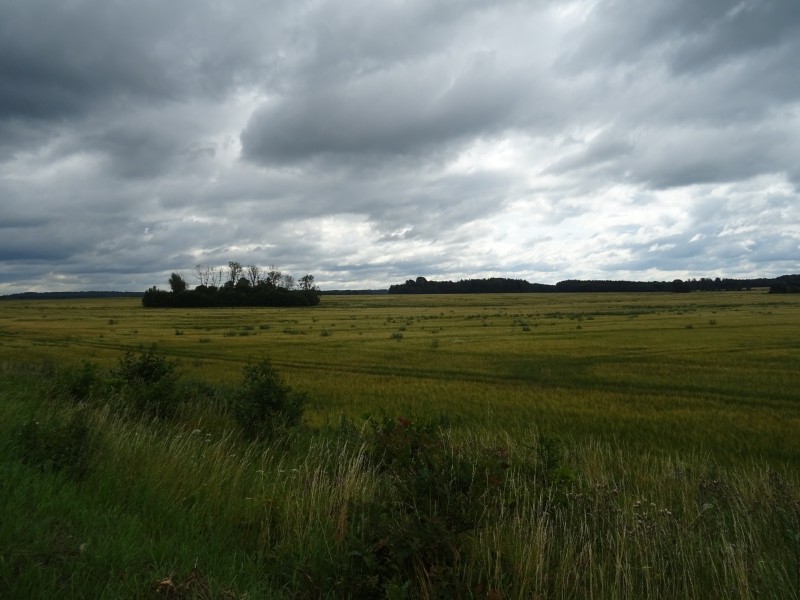 Although the weather forecast (for Riga at least) predicted it would not rain, it did rain for an hour or just after I took lunch at the town of Smiltene, where I looked for a bakery. I haven’t found a single bakery in all my time in Latvia (although I did see a couple of pastry/cake shops), and none of the supermarkets I’ve visited have fresh bread, only nasty pre-packaged bread. This town was no exception, and in the supermarket I picked up only some “vegetable paste” and some pre-sliced cheese. I sat down on a bench and pulled out some of the packaged rye-bread I had purchased around 5 days ago and the top slice had already signs of mould, but the next one seemed fine.

As the rain poured down I tried listening to music. About a week ago, when camping, in the rain, I had left my MP3 player in the grass overnight, and it had gotten soaked through, surprisingly it still works, but the backlight has progressively gotten worse to the point now where it is nearly impossible to see the screen, and the headphones I purchased, despite their initial quality, have also degraded to the point where music sounds klangy and actually not very musical at all. But for audiobooks it’s fine, and I carried on with Zinn. 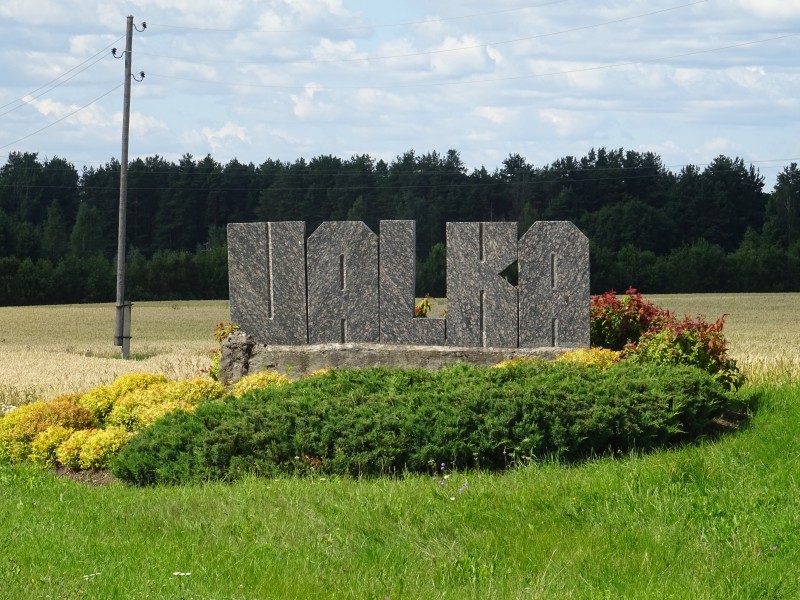 At Valka I crossed immediately to Valga, and passed the erstwhile border checkpoint to Estonia. Stefan had said that he felt Estonia had more trees, as Lithuania already had quite a few trees, I wondered what “more” trees would look like, and indeed when riding out of Valga there were more trees. Very big trees, I think the ones I passed today were all managed forests, and occasionally sections were cleared, and other sections newly replanted, but mostly just big trees on either side of the road. The weather had improved and there was a mild wind, the sun, and the rustling of the wind blowing through the big trees.

Stefan also mentioned that there were bears here in Estonia (and the other Baltic countries). This has crossed my mind a few times, although I’m sure any danger is virtually non-existant. 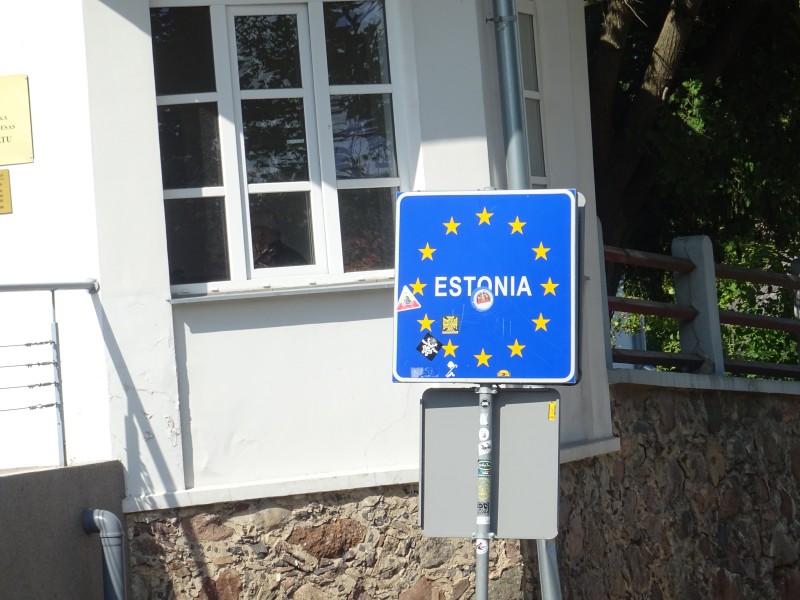 The other thing I noticed when crossing the border was that the roads improved significantly - not only was there asphalt on the yellow roads on my map, but some of the lesser white ones too. Estonia I think has a better economy than Latvia/Lithuania, and I expect things to be a little more expensive (actually both Latvia and Lithuania seemed more expensive than Poland, especially regarding hotels). 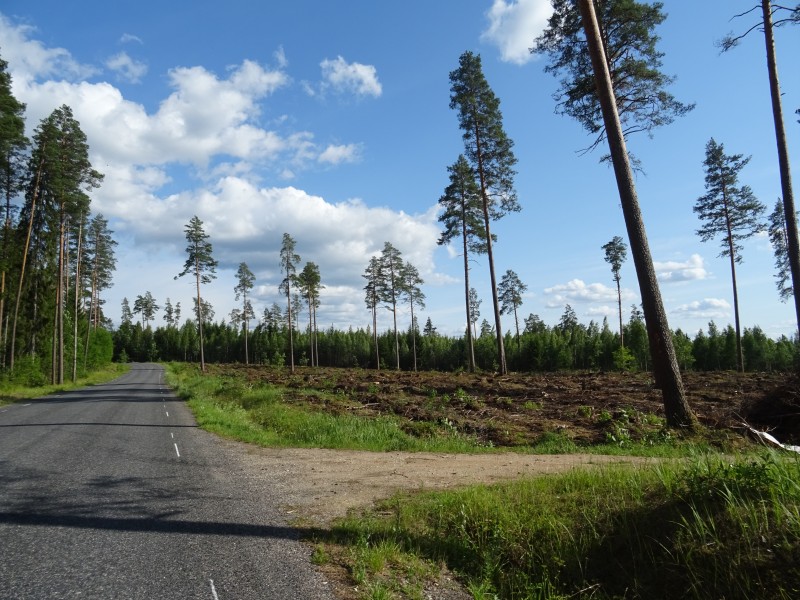 Section of cleared forest, some trees are usually left standing

I had originally considered staying in a hostel in Valga, there were two, but didn’t commit myself, the other option was a campsite/hostel about 14km further, which is where I am staying now. I checked out the hostel in Valga, but it didn’t look appealing, it was a large concrete, featureless house with a closed door, and I suspected it might rather be a cheap place for locals to stay rather than a travellers hostel (it didn’t show up on hostelworld.com) so I moved on.

Not having any internet, the only thing I had which made me believe there was an isolated campsite/hostel 14km away from Valga was the offline map on my phone, which in no way guarantees a place is open, or even if it still exists, but I was relieved when approaching to see official “Hostelling Estonia” signs pointing to my destination on the rural country roads. 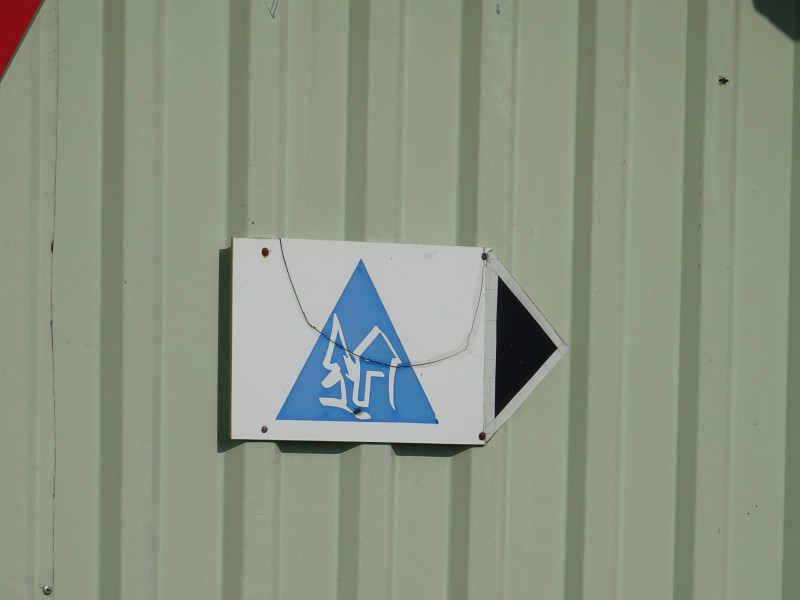 Hostelling sign - previous one had “Estonia Hostelling” written underneath

When I arrived the reception was closed but soon an old man appeared and greeted me. He was very friendly and showed interest into where I was from, and when I wrote down my address in the registrar he even knew the road I lived on in Berlin, as he was frequently there when he was younger - it occurred to me later that he would have been in his prime during the Russian occupation. He was not the first to ask if I studied in Berlin, which is always a bit surprising as I finished studying almost 14 years ago.

Drinking water is taken from a pump which pumps ground water from 70m below, there is a place to make a fire with lots of wood, and the man sold me a couple of beers and some bread. 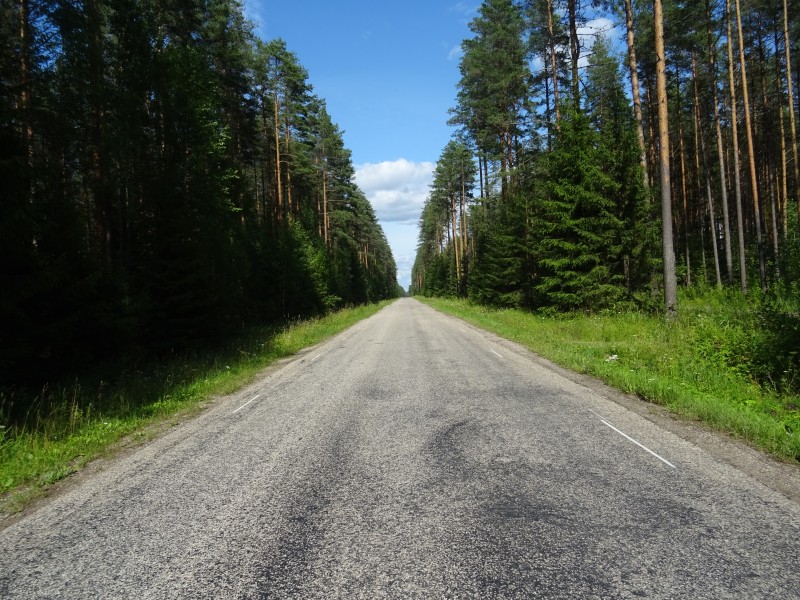 Large trees on either side

I had the option to stay in a bunk bed, or camp. I chose to camp, I’m not sure why. It’s cheaper, and it has it’s charm, and this is a perfect place to camp (there is no noise other than the rustling trees). But I am almost certainly not going to sleep well tonight, but that has the benefit of starting early and probably arriving in Tartu at around mid-day, hopefully with a hostel booked. 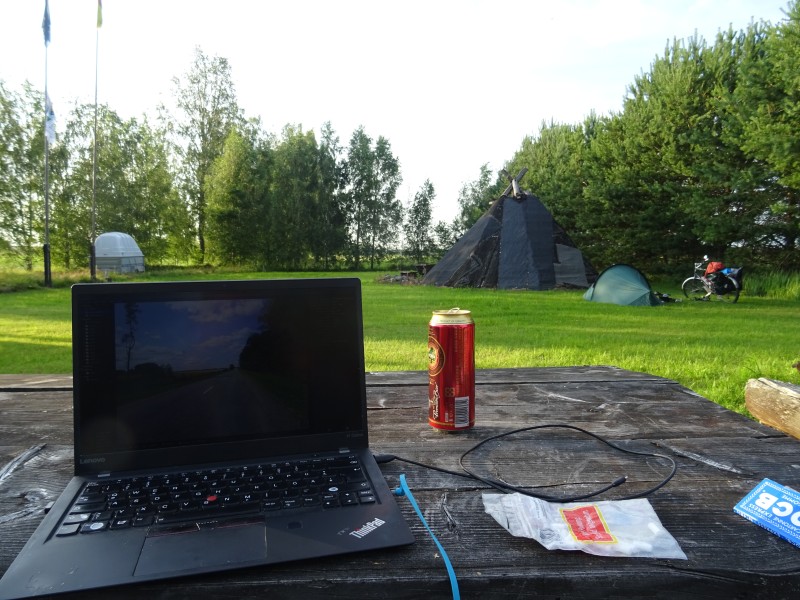 Campsite, flag poles out of shot on the left have Estonian, EU and German flags flying

Seeds are falling from the trees today, and as I’m typing this and looking ahead of me I can see hundreds of little seed-particles blowing around, there are several on my laptop keyboard.

Today was a good day for cycling, despite the rain earlier, the weather has been perfect.