I intended to stay two nights in Tartu, but have ended up staying three. There seem to be no logical resting places for tomorrows journey within a 120km distance (other than hotels which I would consider to be beyond what I’d be happy to pay), and the next campsite is on the coast, which would be 155km - a long day. The following day I could do an even longer day and make it all the way to Talinn, which is either 100km direct, or, if following the coast (and I really should follow the coast) it’s almost 163km, 100 miles and this last act of masochism seems fitting for the last journey on this trip, although there is also an outdoor “hostel” or “retreat” in the forest outside of Tallinn which has been recommended to me twice, so that may break my journey.

In Tartu I got drunk the first night with a guy who was here for Metallica concert (to be fair it was mainly me doing the drinking, he was waiting to get the bus back at 2am), the next day I went for a run.

Tartu is situated on a river and has a few parks on it’s south bank, and I was able to run through these parks and then back along the river bank, over the bridge in the center of town and then along the other side to another bridge. The weather has been very fine, and there were very few people to be found outside of the town (just a couple of people fishing, and the occasional jogger).

Inside the town on my first day it was uncomfortably packed, as there was some kind of “Medieval” festival happening, but when I found myself in the throng of the crowd, my instinct was to remove myself as quickly as possibly, the only medieval thing I saw was a single lost-looking woman in a medieval (or Tudor) costume. But I’m told by some of the hostel guests that it really was a lot of fun. 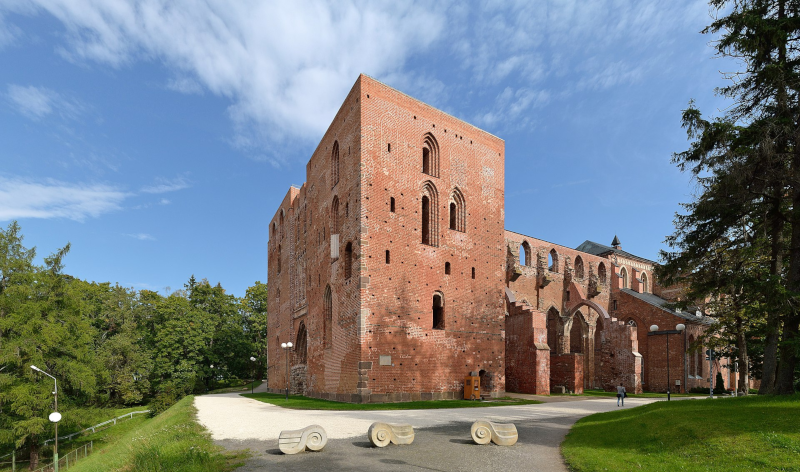 Ruined cathedral in Tartu (from Wikipedia)

Other than this I have been making solid efforts on my programming project, which is rather starting to annoy me now, and I’m wonder at the amount of time I have spent on this thing (it has been in the works since March). I hope it’s finished to a useful state soon and provides some redeeming value.

Last night I researched books to read, I’m currently reading “The Castle”, an unfinished novel by Franz Kafka, but after 150 pages, not really enjoying it. I found a list of 100 books to read before you die, the top one was “To kill a mockingbird”, which I already read, the second was “Pride and Prejudice”, which I hadn’t (and somehow it doesn’t appeal to me), and somewhere on the list I found “Jane Eyre”, which I happened to have on my ebook device, so I’m starting with that now.

I am now sitting in the hostel after having eaten my breakfast and am about to leave, the weather has been excellent for the past two days, but today it looks to rain and I can fill the cool air blowing through the open window to my back.