I’m sitting in the Eurphoria hostel in Tallinn, I got in around an hour and a half ago, and have briefly explored the tourist saturated center, then came back here and played guitar and piano for about an hour and a guy just came in and sat at the drums. There is all the tools required for a band in this room, which is one of the reasons I was attracted to this hostel, and I may be staying here for a week.

I slept well last night and before sleeping watched the final two episodes of Game of Thrones, and the ending wasn’t as bad as I feared. This morning I woke up hungry, which accorded with the number of kilometers I made yesterday, I went out to the shop, but it was 8:30 and not open until 10, so I used the hostel kitchen to make a breakfast with what I had: porridge, jam, partially melted cheese slices and coffee.

It was now only 70k to Tallinn on the main road, and I guessed 100k by taking some of the diversions through the Lahemaa National Park. I would now certainly be staying in Tallinn this night, and so I researched hostels on hostelworld.com and chose the Euphoria hostel (there were a number of nice looking hostels, but the fact that Euphoria had a piano and a guitar swung it for me), I phoned ahead and made sure they could store my bike, and booked (online, as they weren’t keen on booking me over the phone). 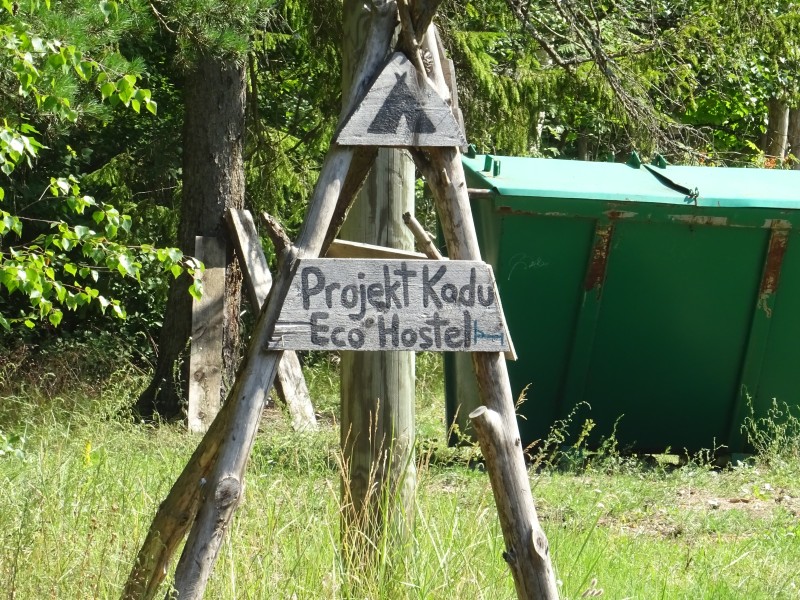 The much recommended Project Kodu, which I passed, but I could have cycled an extra 21k yesterday and stayed here if I had known

I left the hostel, dropping the keys at the post office next door - as instructed - and when I handed the keys to the man behind the counter he looked very confused, and pointed to the hostel next door, I insisted that I had been asked to leave the keys here, and he went inside and fetched a lady - possibly the very same who I met the previous evening - who understood and took the keys - I honestly can’t remember if it was the same lady or not.

I then rode out of Vosu and continued my journey through the national park. Despite the road looking like it was following the coast, there were very few occasions where I could actually see the sea, and the majority of the route was the same – trees lining each side of the road. But it was very quiet, especially after I had a mantrum at my phone’s audio player and decided it wasn’t worth the effort and unplugged it.

Smoke on the water

I had given up on my MP3 player, and thought I’d try playing music from my phone, but the phone’s audio player was incredibly, to my eyes, badly designed. All it has to do, according to me, is play files, organised by folders, sorted by filenames - but no. It does no such thing, it probably does just about everything else, but not that. So I lost my temper and was cursing my phone for being so shitting stupid, and when I finally listened to music I was in no mood, so I unplugged it and the rest of my day was silent.

When I did finally pass some coast I looked out across the Baltic sea to Finland (I was mistaken) , and could see a column of cloud rising on the horizon, it first occurred to me that it was smoke and something was on fire, but then it was the wrong colour for smoke, so I guessed it was steam, and my guess was confirmed later - I was looking at some kind of power plant outside of Tallinn. 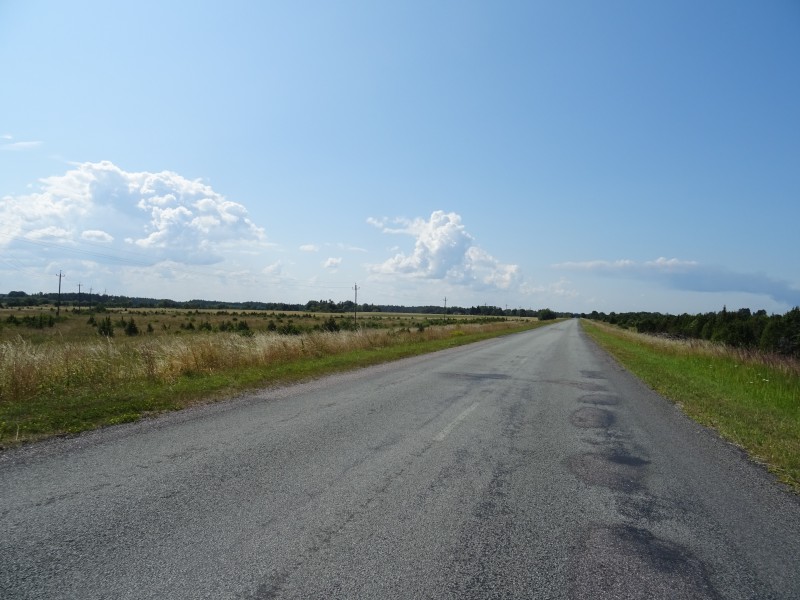 It was hot today, and as I started to feel thirsty, and then hungry (more so for the longer day yesterday), I wanted an energy drink, in previous tours it was beer, this time it’s energy drinks, I need something at least slightly malevolent for lunch, and I couldn’t find a shop, eventually I realised that I had a can of baked beans at least, and that would be more than enough for lunch - all I needed now was a bench.

As it happened the next bench was 15km away - which is always the case - and there was also a shop, so I got both an energy drink, some bread and 4 individually wrapped chocolates. I sat down on a bench outside of the close-by post office and ate the beans, the bread, the chocolates and a pint of energy drink, and then read a chapter of the book, and I was quite full. 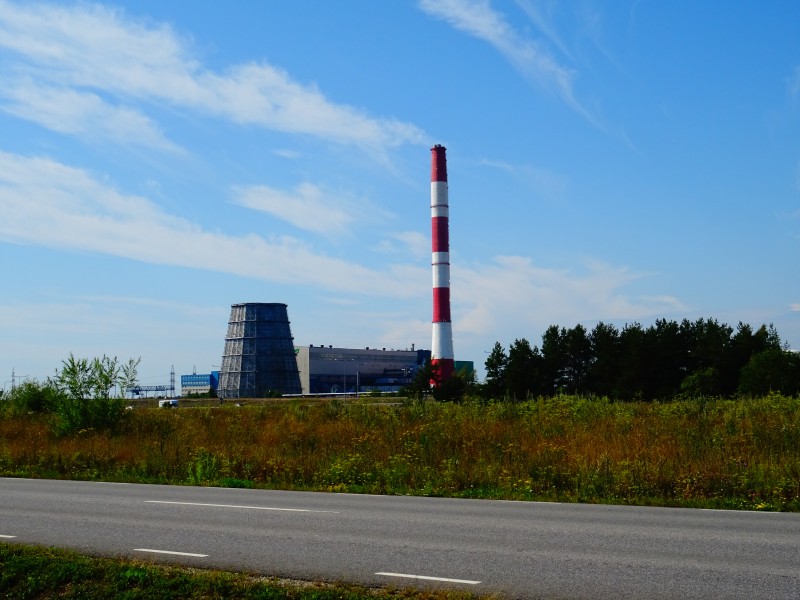 Source of the smoke

Coming into Tallinn, there was the EuroVelo route, but it seemed unnecessarily complex, and I tried to follow the main road, which was at this point dual carriageway, but there were smaller roads either side with cycle paths, but these were awful to cycle on, continuing only for half a kilometer before turning one way or another and no clear indication of where they were going, making me frustrated - I just wanted to follow a road for 4km - so in the end I joined the now 3-lane dual carriage way, there were no signs prohibiting cyclists, so I guess this was fine, if not comfortable. 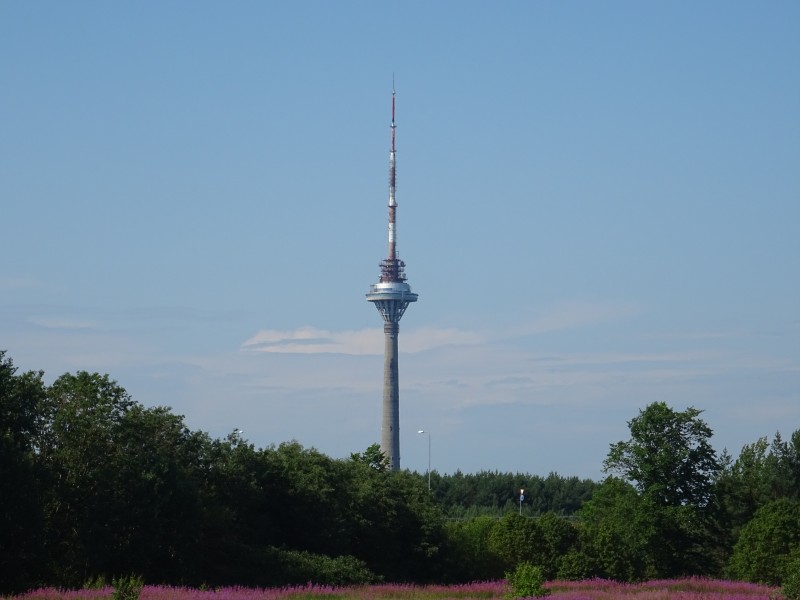 TV tower, similar to the one in Berlin

The hostel I arrived at easily enough and checked in, there were already people playing music.

I have just played for about another hour, and now when writing this blog some guy has pulled out his saxophone accompanied by picked chords on an electric guitar, it’s jazz and it sounds as amazing as a saxophone does cutting into the empty air. 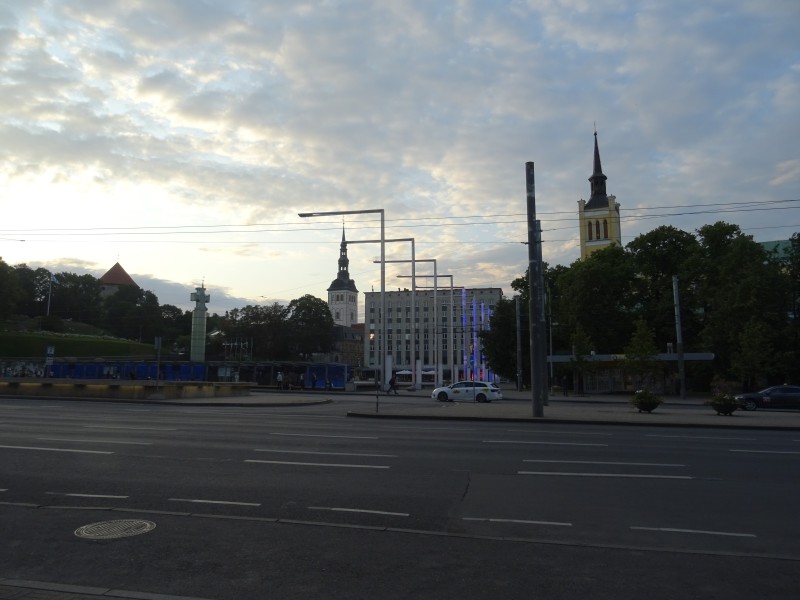 View on the old town close to the hostel

This is potentially my last post, this was my original destination. I just found out that the ferry to Helsinki is not as expensive as I thought (maybe only €20) but the ferry to Trevemunde will be much more expensive, so I will likely get the bus, but will see what happens in the next week - which is a long time.