« Cycling to Scotland
Geschner to Holland (past Apeldoorn)) »

I pitched my tent slowly on the green field in the campsite - I was a bit exhausted. I went to the toilet, had a cold shower (hot water costs 0.5€). As I entered the campsite I thought I saw a shop, and I made my way there to see if I could find a beer.

As I passed a man was looking at me and nodded. The shop wasn’t a shop, then the man said

“Kann ich einen helfen?” (can I help you). I wanted to say “I am looking for the shop” but my German failed me, and I simply said “I want to buy a beer”.

He then directed me to the Biergarten (which was 10 meters away), instead of saying “no I was looking for the shop” (because I didn’t know how to say it exactly) I accepted, considered sitting down and ordering a beer, but decided against it, as I walked out the man said

The man thought for a second, then said “I can give you a beer”, I got my wallet out, then he said “no I give it to you”. He then led me to his home on the campsite, he offered me one beer, then two, I said “no one is fine”, he then offered me a cigarette, I said “no” not now" but thanks, he then sat down, and seemed to want a conversation so I accepted the cigarette.

“My wife is dead for 10 years, and my son died when he was three from a brain tumor” was the first thing he said.

We then talked in German for about another 30 minutes, he spoke with an accent and fast, and while I understood sections, other parts not so much. I often lost the thread of the conversation - and when that happens my strategy is to pick up context later and see if I can fit it together, this strategy rarely works. I told him where I was going and what I was doing, and he told me about his work as a bus driver and the places he’d been. He showed me his place and it had two rooms, the bedroom just had a mattress on the floor and a TV, but it had a garden, and was otherwise quite nice, he paid only €900 a year, but I think he also works here.

This morning I woke up in the campsite. Getting to sleep wasn’t so easy, the Scandinavian group were very talkative, and it seemed that there were two groups chattering away, and due to the proximity it was very loud. I tried ear plugs, but this didn’t help, so instead I plugged in my headphones and listed to Beethoven and drank whiskey until there was no more whiskey (I had a quarter of a liter) and it was silent. 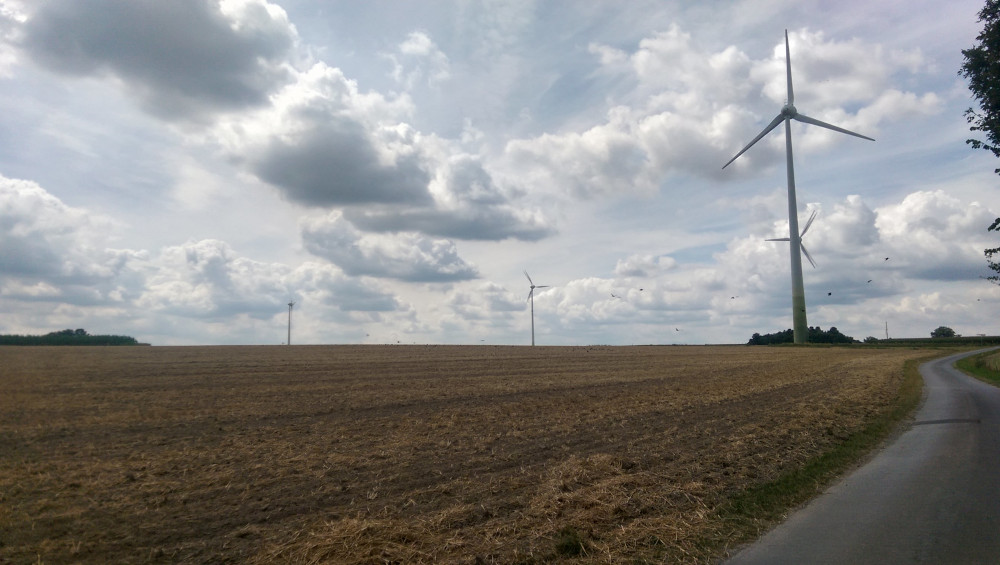 In the morning I woke up at the campsite and already at 7:30 they were apparently sitting outside again and chatting away and having a good old time. I resorted to Beethoven, had breakfast, packed up and left.

I had no clear idea of where I would aim for today - I knew I would try and follow the D3 cycle path (which I think is the EuroVelo 1, at least it’s a labelled also as European cycle route with the designation R1).

Münster looked like a good place, but it was only 70km (80km as it turned out due to the meandering D3 and getting lost). There was a good hostel there, for €20 a night, and I thought I’d give that a go. When I got there the hostel was shut, and I sat down by a church and had a think about what to do, it was only 14:00 or so and I had plenty of time. 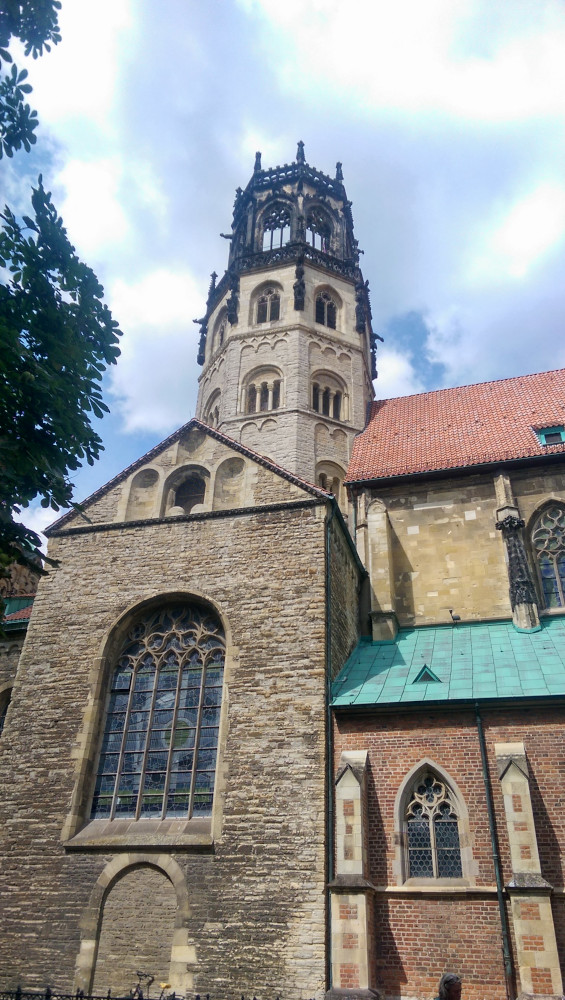 I thought maybe I could stay in Münster and have a look about - it seemed like an interesting city (and lots of bicycles - most flats had several parked outside). But I saw a campsite on the map, and it looked like a good bet - but it was another 60km - as it was so early I thought I could make it and it would be good to do a long day on the bicycle. 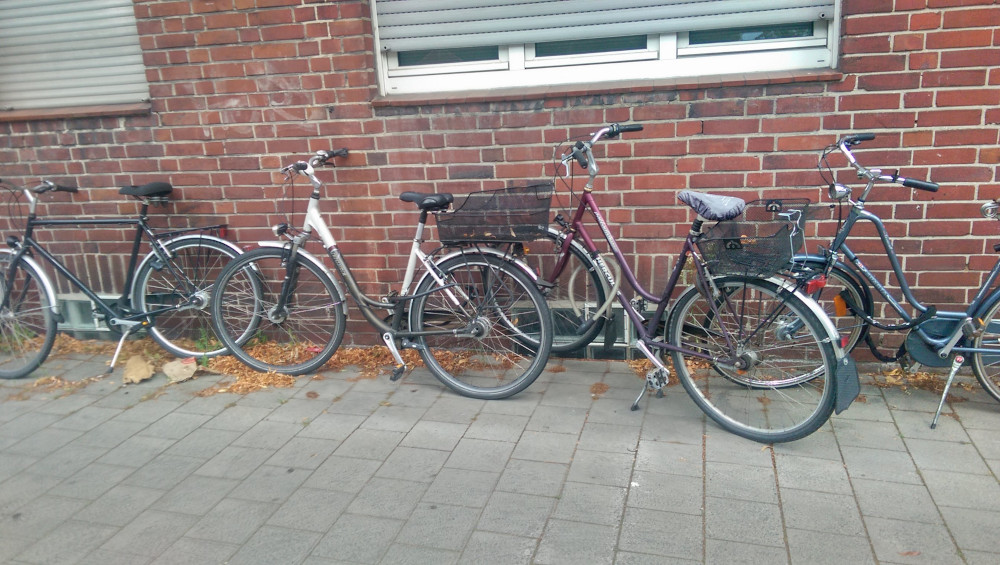 My rear break is still disconnected, I didn’t have the patience to repair it on the campsite this morning with the Scandinavian cacophony. It’s mostly not an issue, as I can still stop well on a road surface with only the front break, going on gravel or “off road” is more of an issue, especially down hill, so I have to make sure to go slowly in these rare situations. 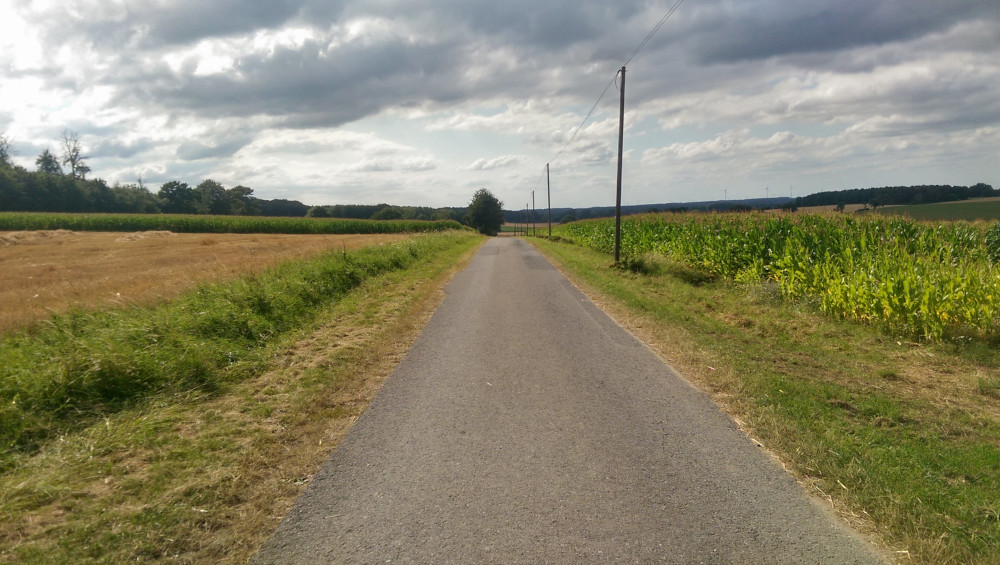 Another road pic _ It’s 138km as the bird flies to Amsterdam, which probably translates as at least 200km and two days cycling. The ferry to Newcastle goes from a port near Amsterdam every day at around 16:00, and I’d probably want to get there for 12:00 to make sure I can buy the ticket and account for any problems I might have. I’m expecting to pay around €250 - and from my brief research this is for a cabin, and going without a cabin is not possible (and I’d probably pay for one anyway this time).

« Cycling to Scotland
Geschner to Holland (past Apeldoorn)) »