« Bielefeld to Geschner
Apeldoorn to Haarlem »

Geschner to Holland (past Apeldoorn))

I woke up at 3am and couldn’t get back to sleep. I lay the wondering why I had woken up - my air mattress was partially deflated and my legs were cold. Neither problem seemed critical enough to interrupt my sleep. I think the cold, as mild as it was, confused my brain and prevented it from sleeping. I was sleeping naked which probably didn’t help either, so I put some shorts and my fleece on and managed to get some sleep. I didn’t expect it to be cold and my sleeping bag is completely inadequate (and I had exactly the same problems in Norway two years ago with the same gear, maybe I should replace it).

The campsite was much better than the previous one, and the only thing I could complain about if, I were to try, was a man snoring loudly in a tent on the other side of the field.

I woke again at 7 and dozed until 8, then made my breakfast (coffee and bread with chocolate spread). I realized yesterday that had a dentist appointment for today at 9:30 in the morning, so I had to phone and cancel it on rather short notice. Then I set to work on fixing my rear brake.

The brake cable I took with me by chance was the correct length, but I couldn’t remove the old one - in order to remove a brake cable you need to pull it from the front through the tubes, but it was frayed in both directions at the end, and I had no wire cutter. I asked a Dutch couple camping on the field if they could help,

They had a wire cutter and I was able to change the cable and now I have my rear brake again.

I had the empty beer bottle from last night, in Germany empty bottles have value, and you can return them to the supermarket for a coupon (usually around €0.20 per bottle). I left it by the bin (thinking I should have left it outside the hut of the man that gave it to me). 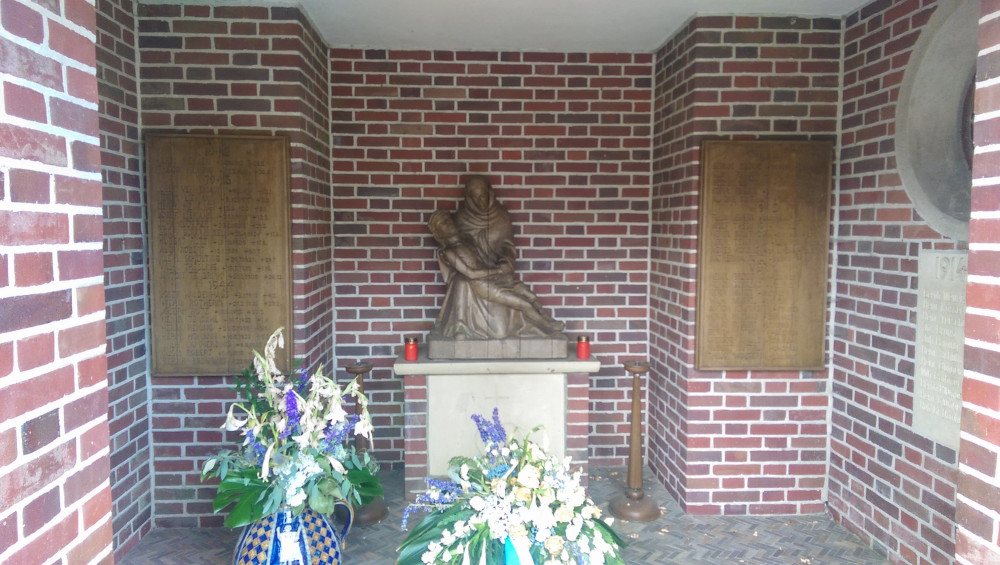 Noticably more religion on the western side of Germany

I cycled west at a good speed stopping after an hour for a coffee and a sandwich at a bakery. The route was perfectly flat and there was no wind as I passed the abandoned border control to Holland.

I stopped at a supermarket - parked the bike outside alongside many others, took my expensive bag (laptop), and also my tent - which cost over €400 - it will take some time before I feel comfortable leaving that outside on the back of my bike (although I can probably leave my bike unlocked overnight and nobody would touch it).

In the supermarket the first thing I noticed is that nobody was wearing a mask. In German the mark “law” had been in place for about 3 months, in England just some weeks (I think). It felt strange to be shopping without the mask. There was disinfectant at the entrance and signs proclaiming the “1.5 meter” distance rule however.

The supermarket had a number of vegetarian and vegan options which you would not get in Germany. There were pre-cooked “instant meals” in sachets. I got something with lentils in it and a “chilli sin carne”. 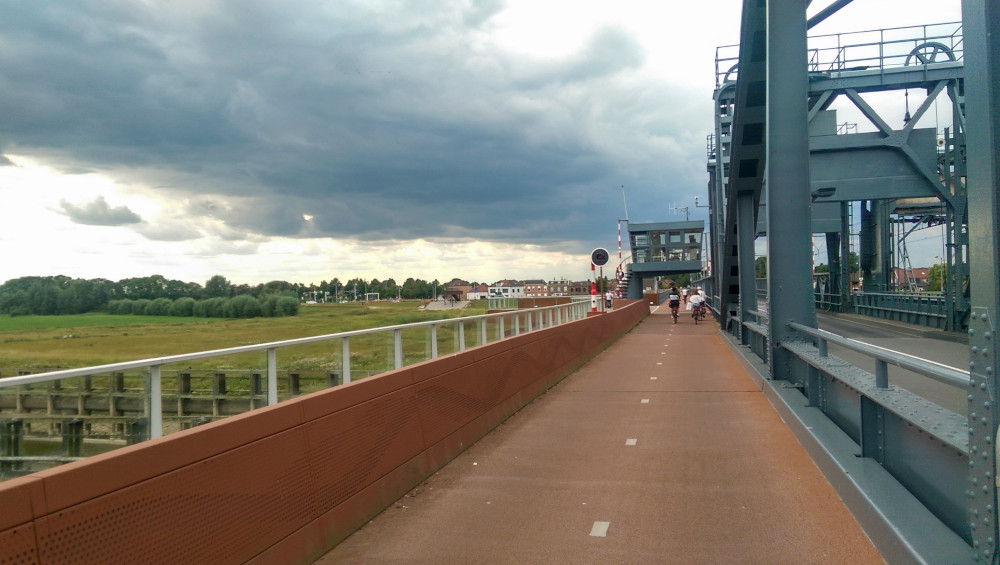 Crossing bridge with other cyclists

Initially I was a bit concerned about the complexity of the cycle network - on my map almost every minor road is classed as a cycle path, which is great, but also it’s hard to figure out a long distance route with so many options, but fortunately even the “national” roads have cycle paths running parallel to them, so I was able to use the road map as a reference.

The theme of the day was probably lack of electrical power. Last night I left my phone on the charger and when I woke up the charger was almost empty and the phone was only on 70% (the USB connection isn’t very good, and I need to carefully adjust the position until it connects and gives power, but it often loses the connection - the probability space for “charging” is decreasing all the time). My laptop can also be used as a backup source of power, but at 3 years old it can only last 2 hours, and I burnt half of that writing my blog last night.

I tried to economize, and set my 70% charged phone to “aggressive” power saving and used my compass to check my bearings when otherwise I would have checked the map. This worked really well, and after 5 hours it proclaimed to have 50%. I decided however to try and stay in a hostel and get everything charged up.

There was a town “Apeldoorn” which appeared to have a hostel in it, and it was about 100k from where I started this morning, and there were plenty of campsites and forest around in case they were full. It was a true “youth hostel” (Hostelling International) and there were teenagers everywhere and it was full, so I made my way to the next campsite.

One thing that struck me, for some reason, was the cultural diversity and integration. Lots of kids from different ethic backgrounds playing together which shouldn’t strange, but I noticed it all the same. The supermarket was also mostly staffed by teenagers - on the whole my impression was similar to the one I had from Norway.

I entered a national park and there were many wild camping opportunities, I reasoned that I probably had enough charge in my battery to give the phone another day - and I reasoned why do I need the phone anyway? The answer is of course that I’d completely fucked (navigationally) without it. 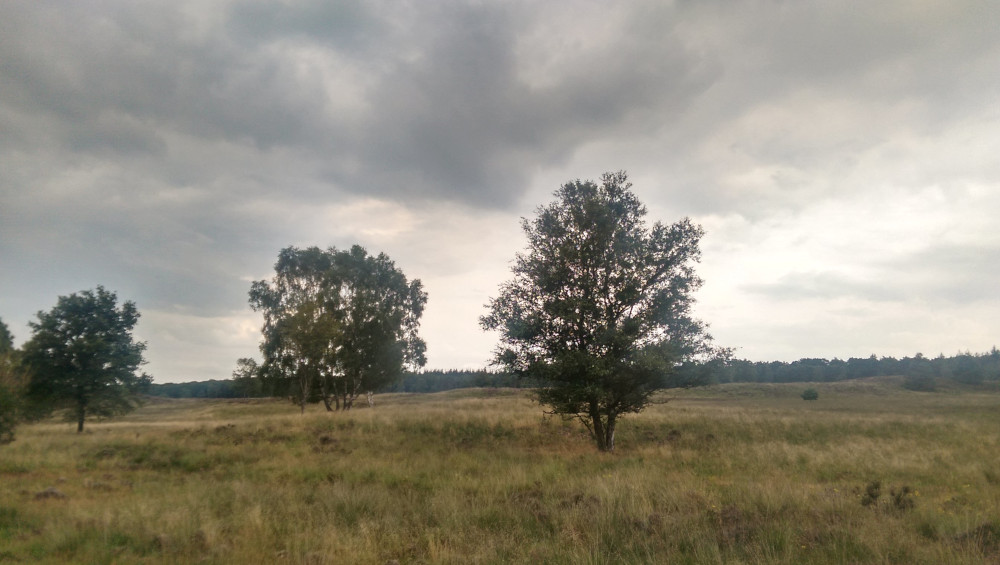 The campsite is much better than the previous two in Germany. It’s in the national park and there is a huge field. They have a lean-to beside the main building with power, and a charging bank in another room where people can charge their phones, so I’m charging the battery in there, and writing my blog post and charging my phone at the same time.

Tomorrow I can certainly make it to Amsterdam, but I’m not sure if I’ll stay there. I might push a bit further to the coast, nearer to the port, and find a campsite. Then hopefully I can get the ferry to Newcastle on Wednesday.

« Bielefeld to Geschner
Apeldoorn to Haarlem »