« Geschner to Holland (past Apeldoorn))
Haarlem to Newcastle »

I am now sitting outside at a pizza restuarnt in Haarlem, about 10km west of Amsterdam, and about 10km from the ferry port.

I slept again badly last night, I thought I chose a quiet spot in the spacious but busy campsite (tents only). It was full people having a mostly quiet time, some spots were equipped with wood burners and it was as peaceful as it could be given maybe 100 people in a field.

The facilities on the campsite were markedly different than in Germany, they were very clean and the hot water was free (in Germany all hot water on campsites costs money), and although the campsite had camper vans, this closed part of the site had only tents. In contrast to Germany however, they didn’t provide toilet paper. 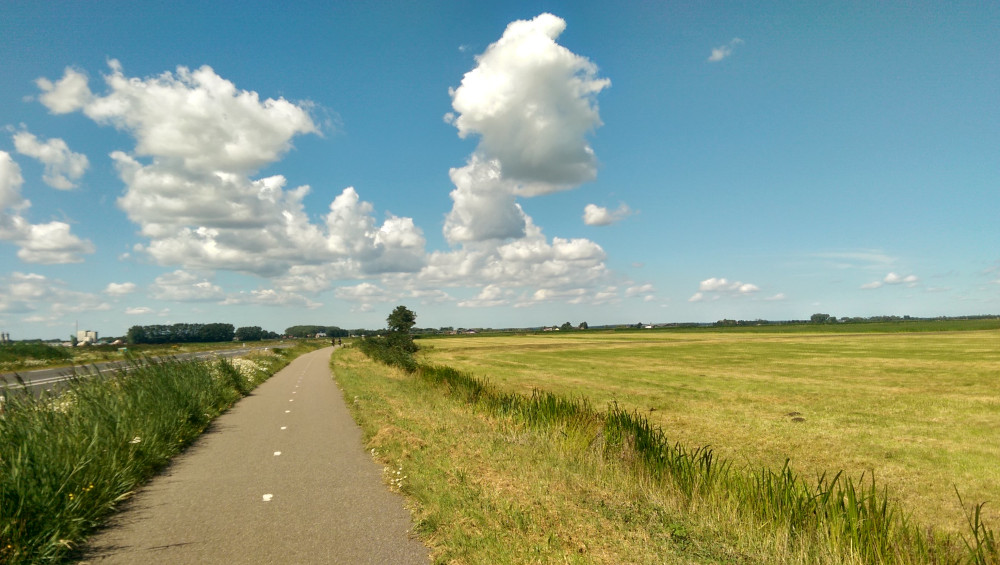 I slept badly for the same reasons as last night, and because some outliers were running around drunk at 2am, and my neighbour (a 65 year old woman whom I thought would not make noise) seemed to be having a good time either alone or with someone else.

But above all again it was the cold and uncomfortable mattress.

In the morning I picked up my battery from the charging shed (it wasn’t fully charged, but maybe it has 80% more than enough for four or five days I guess). I didn’t have any bread for breakfast, and the only food I could find was chocolate, and a few squares and a coffee and left.

It was about 15k to the second town, where I stopped for at 10 for a breakfast sandwich. I went into the bakery. I couldn’t see any sandwiches on display and I asked the young guy behind the counter “I can make you anything you want” and he indicated a sandwich bar. I had the somewhat typical cheese, egg, salad and mayonnaise and a coffee.

I was passively looking to buy something to improve my sleeping experience and some headphones and I came upon an electronics shop. I went straight to the headphone section. I wanted to get some wired in ear headphones which do not block-out outside noise (because it’s actually good to hear things on a bicycle and when doing any sport the last thing you want to hear is your own breathing). These headphones cost around €8 and were probably shite. In the 90s you could buy pretty good Sony in-ears for around €14 but they are discontinued and their replacements are crap.

There were also a number of wireless (bluetooth) headphones, and the sales guy recommended some JBLs. They cost €49 and hang around the neck, I decided to give them a try.

Outside the shop I put them on and started listening to Guns ’n Roses (Use Your Illusion 1). It sounded actually great. But I have some doubts - they do block the outside sound, and they have a battery life of only 6 hours - which should be fine, but it’s another thing which needs charging. The plus side is that maybe it will limit the amount of time I’m listening to music, and that can only be good for my Tinnitus.

I made my way towards Amsterdam going west. At one point I came to a blind spot on my map - I had downloaded two regions but there was a section in between them that was missing, and for some reason the online tiles will not download on my map application. But I found my way to a sign-posted route heuristically with my compass. 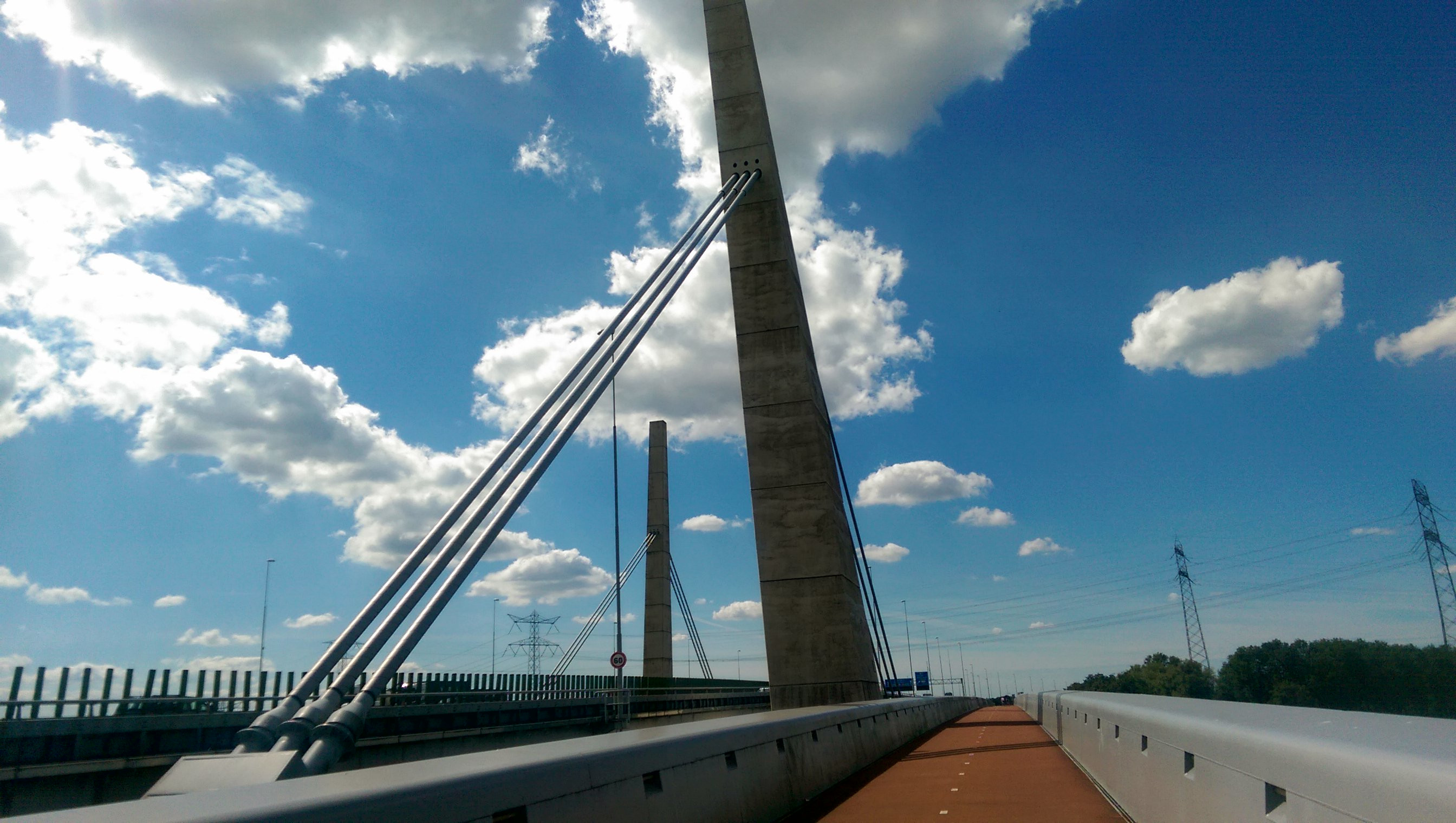 After this I started the approach familiar to any city. Lots of motorways converging, overpasses, more traffic (both human and mechanical). One thing to note that even the would-be concrete jungle was green. Between the motorway and the cycle paths there were trees and grass.

As I approached there was an increase in people on mopeds and small electric cars using the “cycle” path. Most of the mopeds were driven by, what I guess, are 15 to 16 year olds. Occasionally somebody will drive 50kmph, and once somebody cut inside of me at speed. So not everything is perfect.

For lunch I stopped at the first bench I could find after 13:00. I had some cherry tomatoes and cheese triangles, I also got some crisps and made a tomato / cheese / crisp sandwich. As filling as that was I decided it wasn’t enough and devoured the remainder of a 3 month old chocolate bar that I discovered in my camping bag.

I passed through Amsterdam pretty directly, passing through the center, past the main train station. I was here last year for a conference. I considered staying but thought it better to carry on to Haarlem and stay closer to the port.

After 10km I arrived in Haarlem, which is really like a smaller Amsterdam - it has similar canals and bridges (also tourists and restaurants). I hadn’t yet decided on what I was doing and I stopped at bar for a beer and had a think.

I checked my map and there were a couple of hostels, one was called Hello I’m local!. I checked the website, which seemed intentionally “low-fi”. The price for a bed was €31 which seemed comparably cheap, and it had good reviews on Tripadvisor, I booked on the phone (it was cute and said “WARNING: you have successfully booked your stay”) and finished my beer then made my way (maybe 200m) to the place.

It appeared very nice, there were plants, jazz music and everything was wood and clean, behind the bar was a big kitchen. The young girl (most serice people seem to be young) always said “You can use my garage”, “you can use my room”. Obviously this seemed very unnatural, and this sounded like forced policy, but all the same she was very hospitable, and as was quick to ask about my travel plans. Even if it was a trained act, it is still nicer than a cold welcome.

The dorm room was well ventilated and clean. The en-suite bathroom provided shampoo, body wash, and something else - which is so essential if you want to maintain hygiene in a room with 8 travellers. They also provided a free towel and a padlock for a €10 deposit. All in all, it was well crafted to provide the best hostel experience - with the slight corporate overtone.

So I then had a good shower (first good one in three days), and was sure to wash my sandals which had started to smell (because I’m bare foot).

Then I ventured out to find a pizza. There was a very large church in the center of town, and I looked at Tripadvisor (I think today is the first time I used it) to find a good Pizzeria. I found a place outside and was served a pizza on a slate, costing around €12. 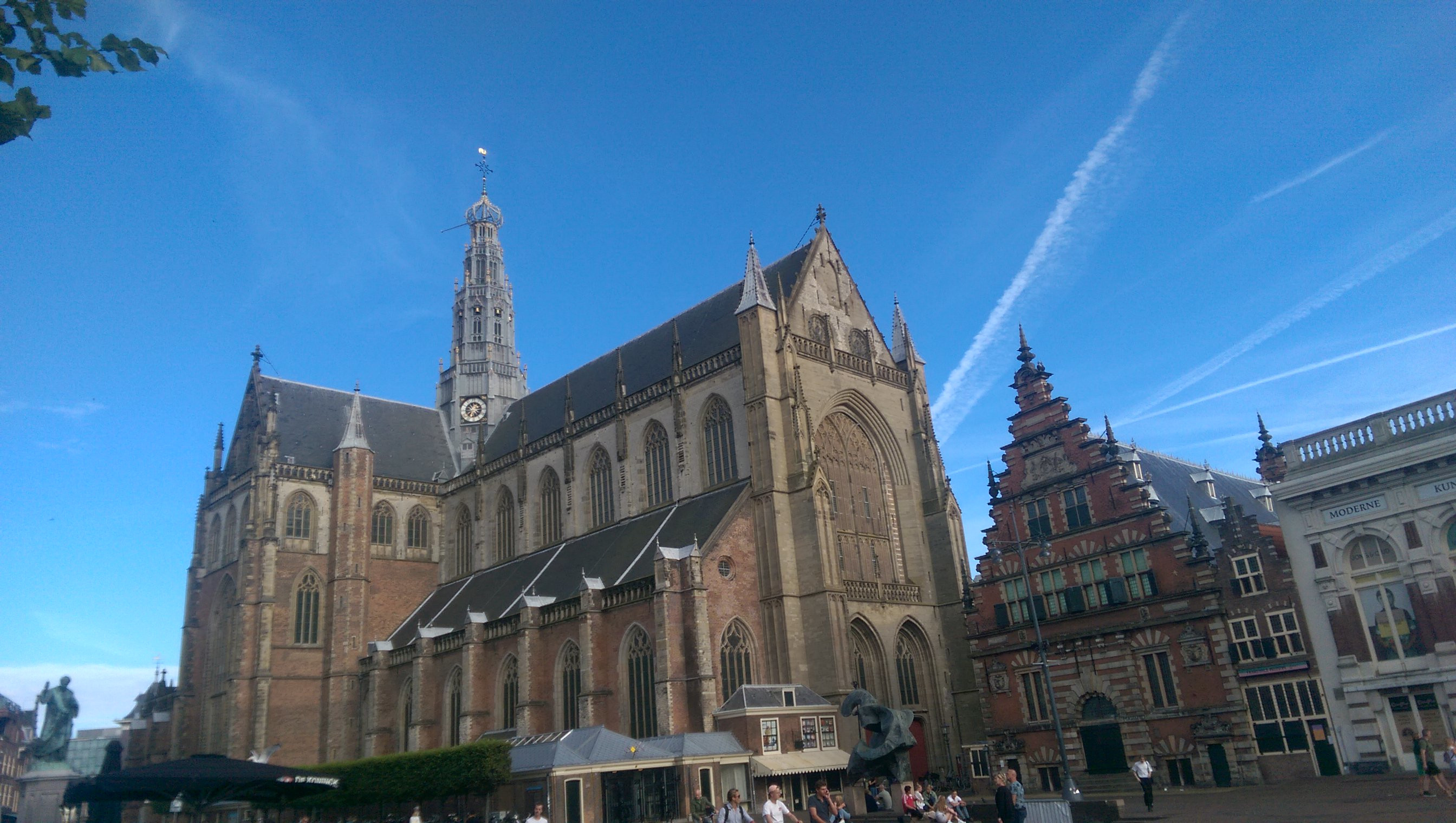 When I get back to the hostel I’ll plan for the ferry, and maybe book the ticket. I’m assuming there will be no problems, and I intended to just show up, but as I have some time, if it’s clear, then I’ll book today and look ahead to my stay (depending on when I get in) in Newcastle and subsequent trip north in England.

I want to cycle the Scottish Highlands, I will have around 3.5 weeks, and I think it’s around 4 days or so from Newcastle to my brothers place. No idea how far it is to the Highlands, so will make these decisions later.

« Geschner to Holland (past Apeldoorn))
Haarlem to Newcastle »