« Newcastle to Seahouses
Edinburgh to Pitlochry »

I slept well in my tent last night for the time in years due to the new mattress, the night before I sat in the tent reading or otherwise staring blankly into the trees above the stream that I was camping next to sipping whiskey.

In the morning I left, heading towards my provisional destination of the day before - Eyemouth. As the bird flies Eyemouth didn’t seem that far - but the N1 cycle route took me on a winding path off road which hugged the coast. To my right was the sea, and cool sea breeze and the unpeopled sandy beaches, walkers would pass me and say hello, everybody seemed happy 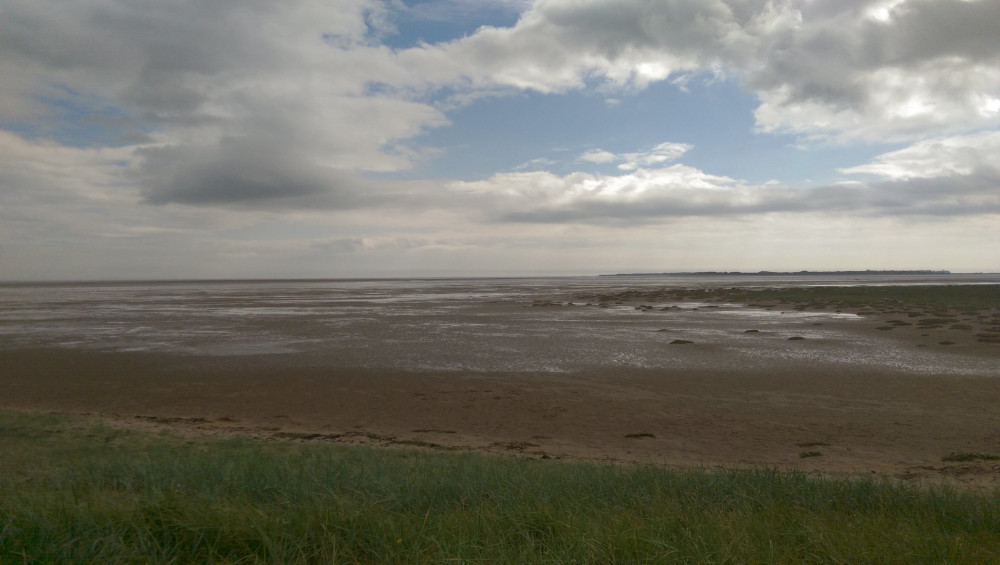 Cycling the coast path up to Berwick

And this part of the cycle route really was great, the views over the bay and strange rock formations were very scenic and it was fun riding over the foot path with it’s undulating trowels and peaks.

I stopped at a town called “Berwick-upon-tweed” for lunch and went to Greggs - a popular bakery chain in England - and got a “Ploughmanns” (they had them), a packet of cheese and onion crisps and a cookie. The girl forgot the cookie, and when I reminded her she gave me one free. I sat down in a very scenic spot in a very scenic town. This was the town of _ as I turned a corner I saw the river, down stream were a series of three bridges, each bigger than the last and on the other side of the river a fortified town wall.

I said that I was going to Scotland, but I didn’t think I’d get there until the evening time, and I didn’t realise Eyemouth was in Scotland, and I passed the border for the county “Scottish Borders” unexpectedly. Somehow Scotland seemed different. The towns were different, the country was different, the people were different. I don’t think I heard anybody with a Scottish accent south of the border, but north it seems most did. For some reason I don’t expect identities to change so much over so many kilometers - but maybe it’s just me. 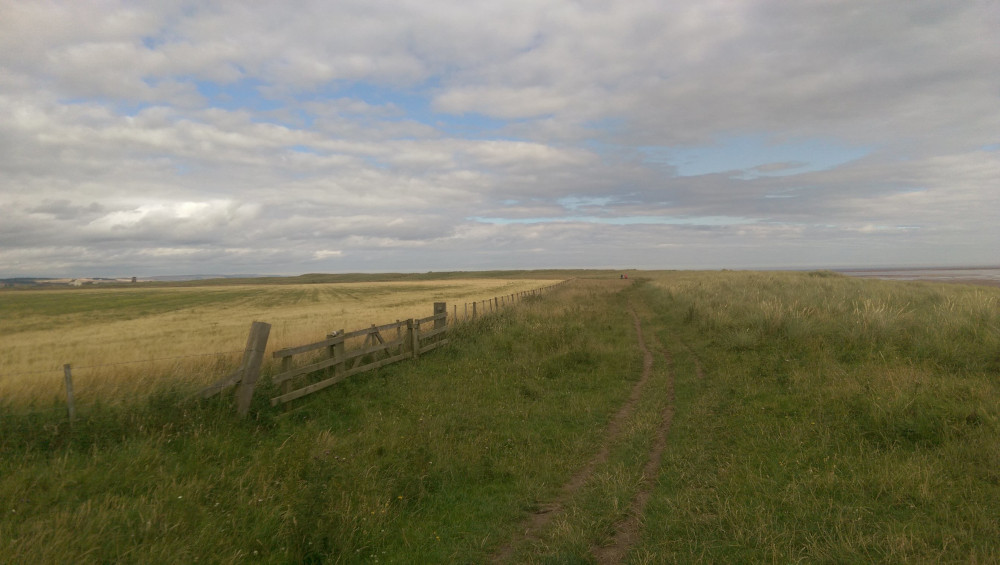 Further on the coast path

I didn’t know where to stay as usual, I could either camp at a campsite before Edinburgh, or get a hostel in Edinburgh, going to Edinburgh was longer, so I wanted to book ahead if I did this. The campsites looked bad in the run up to the city (holiday parks - probably with no camping anyway). 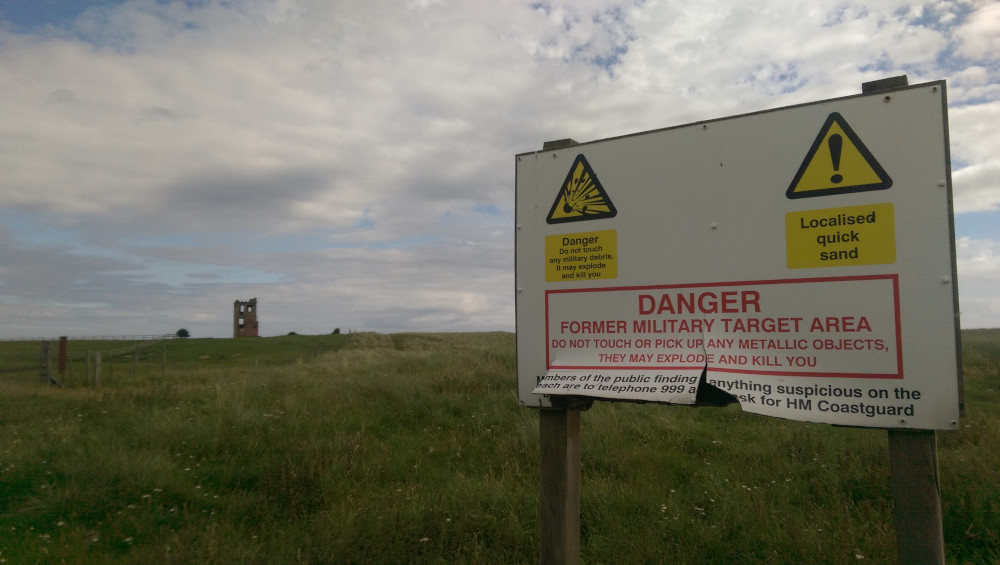 Blunt and to the point

I choose a hostel on Hostelworld, and tried to phone but nobody picked up. So I carried on - I’d call again later. I marked other potential hostels on the map too - I didn’t want to book online, because there could then be no guarantee they could accommodate my bike.

I rode through Dunbar quarry, which is notable only in that it was a huge site with lots of industrial buildings, a big chimney, decaying trains, and huge excavations in the earth. At the end there was a quarry which was shutdown in 2002 and was left to be reclaimed by nature, it is now a huge lake.

It was very humid and hot today, I listened to the Manic Street Preachers for a few hours (my only music today due to battery concerns) and enjoyed the scenery and the hills, there were lot of hills and some mountains.

“Hello!” said a cyclist who I had been eyeing in my mirror for a few minutes waiting for him to overtake him “Hey” he had pulled over next to me, a talker “Where ye heading?” “Inverness … and then cycle down the west coast to see my brother” “Ah” “Galloway Forest” “Yes” “Newton Stewart” “Newton Stewart”

He appeared to be in his late 60s and was cycling back to his hometown about 3 miles down. He gave me directions which were all on the cycle route which I was following anyway. 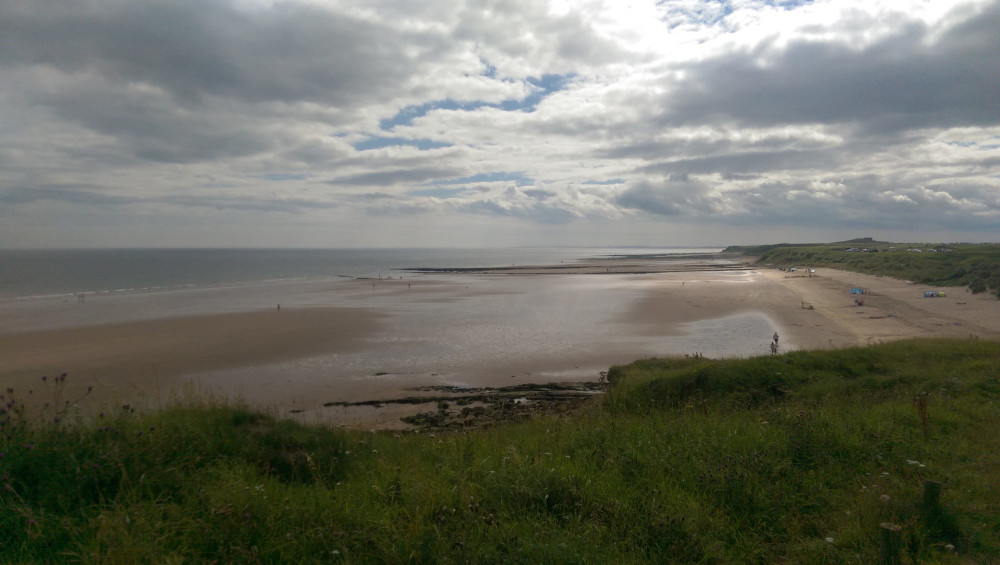 I passed the two campsites, both were caravan parks. I tried the hostel for a 3rd time, and somebody picked up, the quality of the call wasn’t good, but I eventually heard " … haven’t reopened yet, so ‘ah can’t help you out". There was another hostel which would certainly have space and appeared to be open according to their website so I decided to go there.

I was now very tired, and already not thinking very clearly. It was coming on 8 hours. I decided to go to Edinburgh on the A1 road rather than the meandering cycle path, it was only another 10km or so, and as the Scottish cyclist told me earlier “there’s a cycle path on the side” 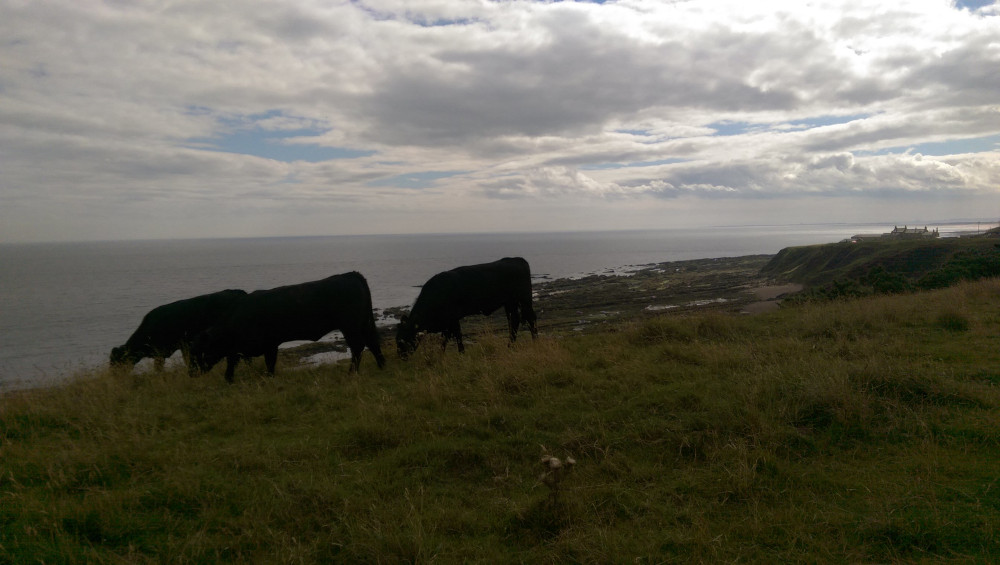 My phone was dying from lack of battery power and although I have my battery, the connection doesn’t hold, and even when I adjust it “just right” it loses it again over every single bump in the road. I had about 10% left.

The cloud was darkening with rain clouds, and as I rode in to the city center it started spitting, and I considered my prospects of finding a hostel as I walked in dripping wet with a wet bicycle leaving a muddy dirty trail behind it as I walked it into the reception - not that that would happen, but that’s what I thought about. 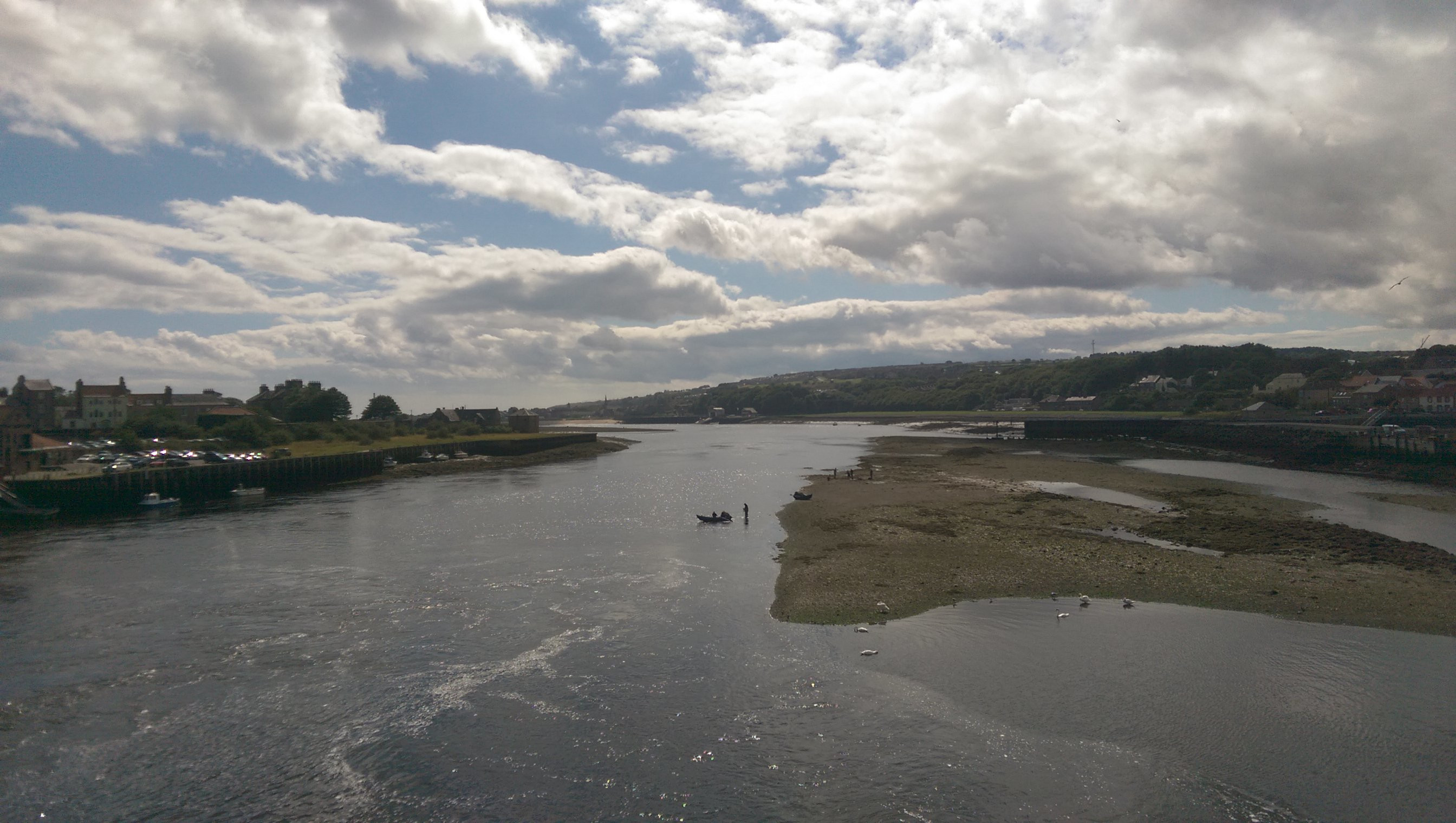 View from bridge corssing into Bewick-upon-Tweed"

“Have you got a bed and a place for the bike?”

“No, we could put it in the luggage room, but it’s locked now”

The guy was apologetic and recommended that I go to the travel lodge next door. I cycled up but there were lines of people marching in with their suit cases and I thought “fuck that”. By this point the stress was building up inside of my very weary head. It’s like a city could swallow you up with a touring bicycle, if you’re backpacking it’s fine, but having a touring bike that you can’t leave alone for 5 minutes is another thing.

I cycling randomly looking for a place, feeling increasingly desperate and not thinking straight, when I was sprayed with liquid from a passing car. I heard immature laughter and I hardly reacted at all. What had they sprayed me with? To some extent I really didn’t even care I was that tired, but it was water.

I managed to put my brain together enough to use the internet on my dying phone and I found the St. Christopher’s Hostel and I found out where it was. 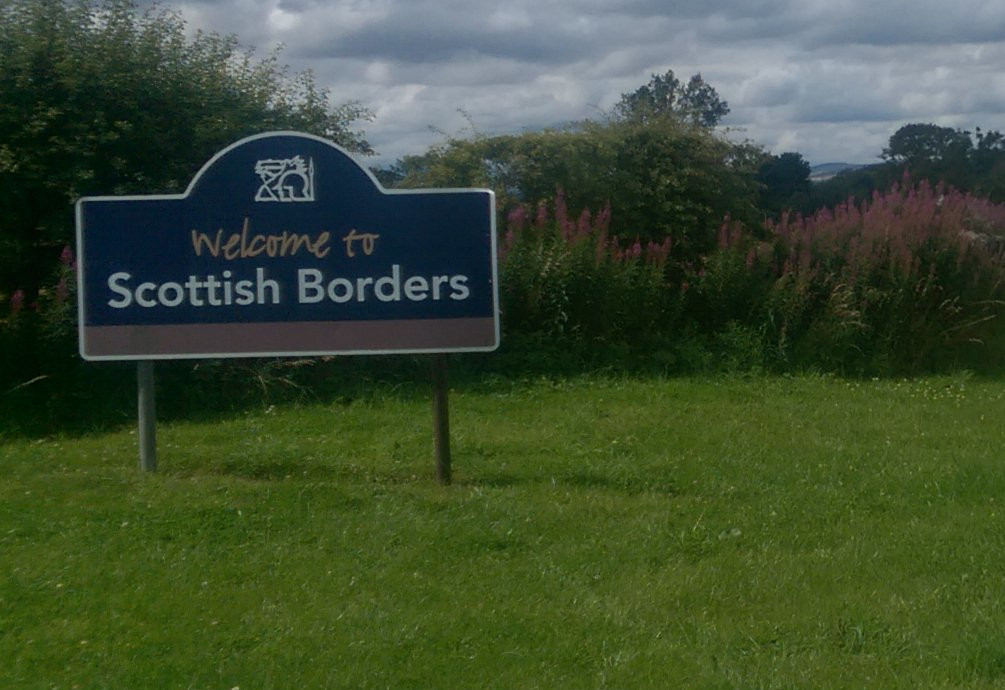 It was a restaurant, but they were indeed also taking bookings for the hostel, the girl let me pull the bike into the porch, and I went inside, I had to wait 10 minutes, I was extremely anxious, so many people, my bike outside, my tent, my laptop, me here, my bike out of sight. Finally I was able to ask the question.

“Yes, I want a bed, but have you got a place for the bike” I smiled

She booked me in, I paid about 14 pounds, and she let me put the bike in the “old bar” over the road, which was an abandoned bar now used for storage, there was already another bike in the room, and I left both my bike and the tent in there.

The room is sturdy but minimal, there is no social area (Covid) and the bathrooms are assigned to rooms (e.g. our shower is for the use of rooms B20 and B19 each containing 8 people each).

After taking a shower I went to a pub, I asked for chips and beer “the kitchens closed I’m afraid” well, just a beer then. He wanted me to scan a “track and trace” bar code. My phone doesn’t scan bar codes at the moment, he then asked me to send an SMS to a number saying the address of the pub - and I really didn’t know how to do that. Finally it said “sent” and he let me in, but later I got a “message not sent” message - because it’s a German phone.

I’m typing this now with 7% battery power on my laptop, unfortunately I left the power adapter on my bike, which is locked in the “old bar” so not sure I’ll be able to send this tonight, but fortunately the hostel bed has 2 USB ports, so at least I can charge my phone and battery pack.

Tomorrow I should be in the mountains.

« Newcastle to Seahouses
Edinburgh to Pitlochry »