« Seahouses to Edinburgh
Pitlochry to Inverness »

The only other guy in the room (I guess the dorms are not at full capacity due to Covid) decided to come in at midnight and start watching a TV program on his phone with the loudspeaker. Forcing me to get out of bed and ask him to stop it (because he was so engrossed that he couldn’t hear me ask from my bed).

The hostel provided “take away” breakfast but let me sit down in the bar and also lent me a UK power adapter so that I could use my laptop and upload yesterdays blog post.

I was on the road by 9am and I was going to cycle into the the “mountains” but first I had to cross the bridge. There were two large suspension bridge and a separate victorian railway bridge. One lane was closed but a helpful Scott told me in detail how to cross under the underpass and use the other side. 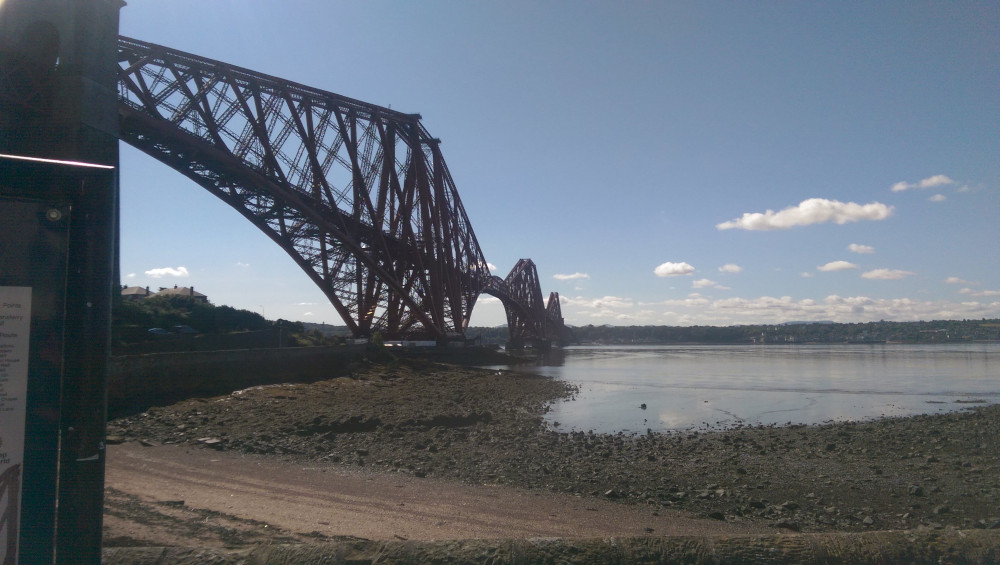 I passed several cyclists and afterwards one of them caught up with me and had a chat - I spoke with him twice, once in Queensferry and then again outside Greggs a few kilometers later where I was getting my “Plougmanns”. Scotts are generally very easy going and easy to chat with.

The first “pass” was about 250m according to my phone’s GPS altitude and offered some great views. 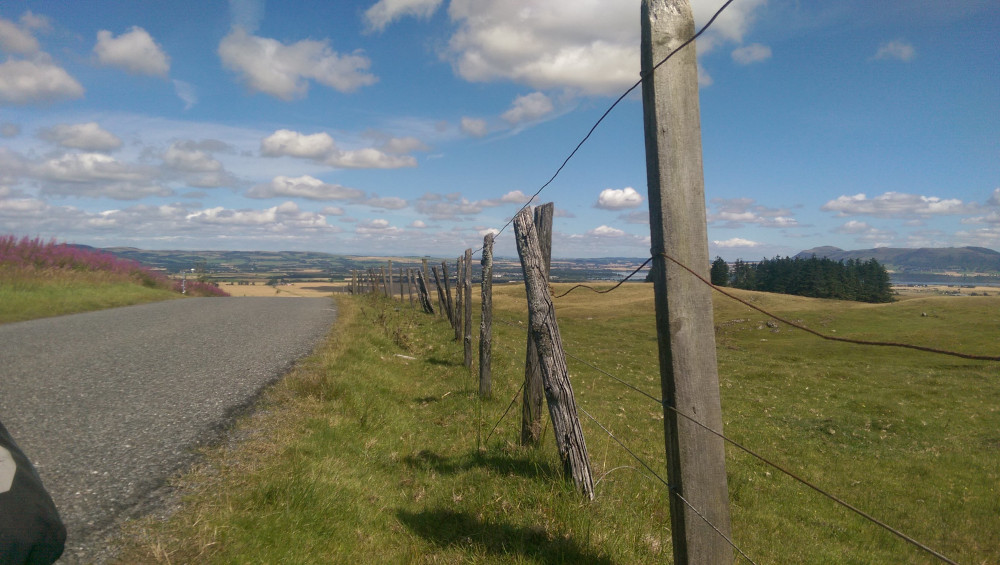 Coming over the first pass

I then passed through Perth, and on the way I noticed my rear wheel wasn’t turning freely. The wheel had been knocked slightly from it’s clamped position, and when I fixed that, I realised the breaks now also needed adjusting, so I just loosened them to at least provide some stopping power while still allowing the wheel to turn freely then stopped at the next convenient place and fixed them properly. 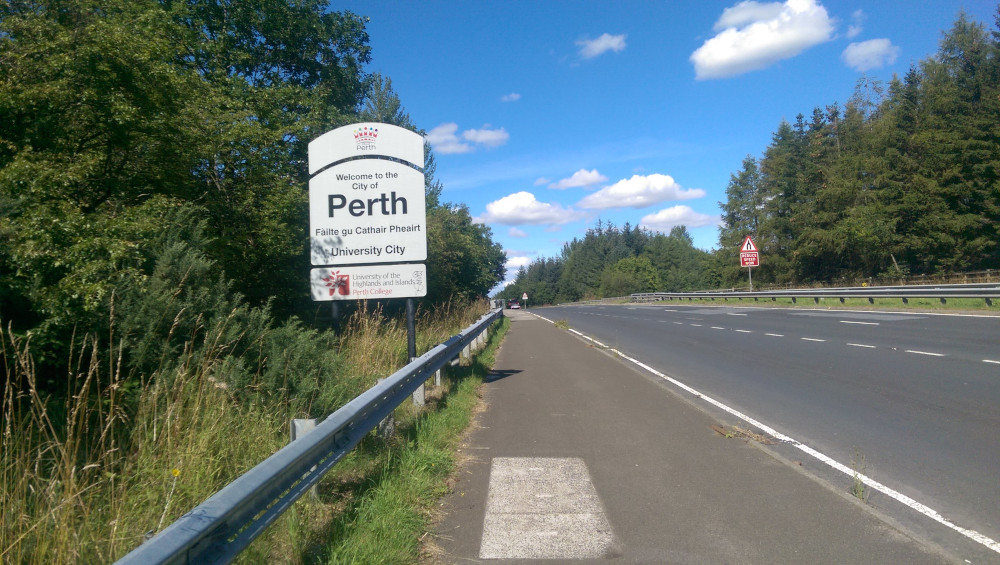 The rest of the day is a bit hazy, as I’m writing this the day after because last night I was wild camping. But that wasn’t my intention. I intended to stay in a hostel or a camp site near Pilochry. I remember inspecting some strange plants which made “cracking” sounds in the heat and they’re “pea pods” were hard to the touch and rang metallically against my knife when I knocked them, then a cyclist rode by saying “hello” she was touring.

I caught them up as they were not going fast, they were a couple maybe in their middle to late 20s cycling for a couple of days, both on Furlough to different degrees. We kept pace for about 30 minutes and then I said goodbye and went on ahead. They were going to try and “wild camp” at Dunkeld. 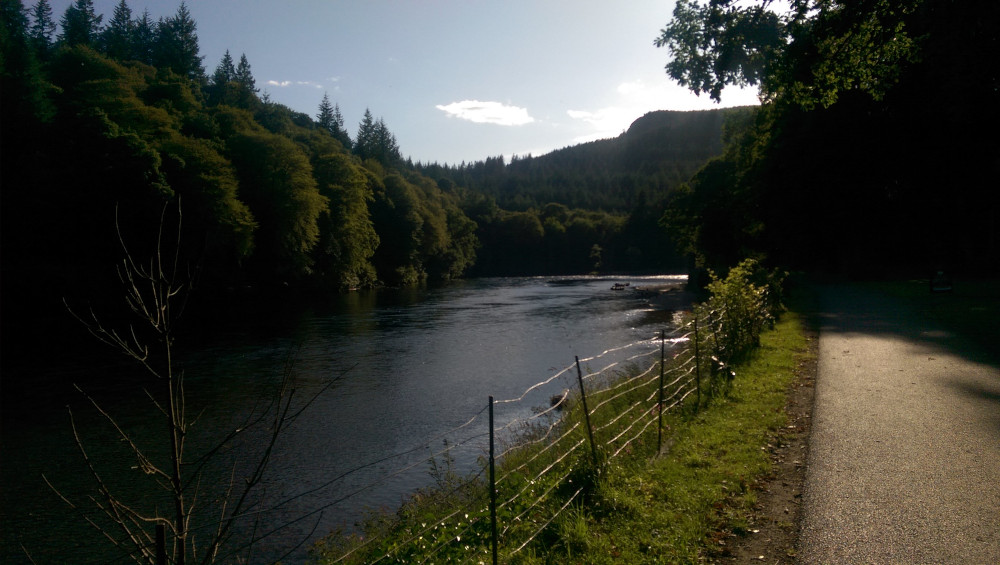 I also stopped at Dunkeld (getting there before them) and had a beer. I had done my 100k minimum by now, and the next town Pitlochry was another 30k or so, and I thought I’d try going there to find a hostel, or a camp site, or otherwise just find a wild camping spot. The idea of wild camping appealed to me, but I wasn’t sure. 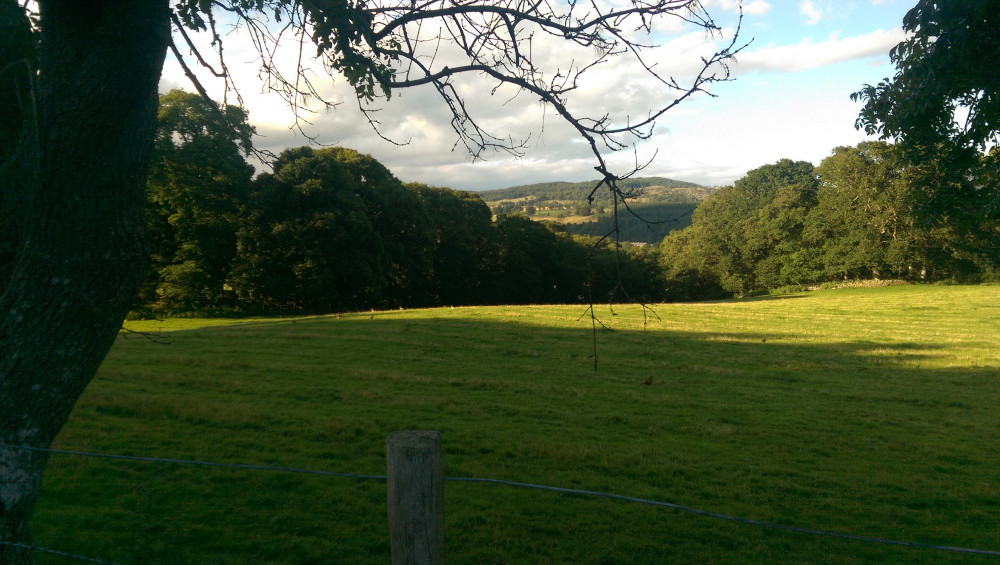 Can you see Grouse?

On the way there were lots of, what I think are, “Grouse”. They have a funny way of walking, which resembles Velociraptors from the Jurassic Park film. They were numerous and easy to scare, although sometimes they seemed to be running beside me even whilst running away.

The hostel was full and the campsites were caravan parks and receptions were closed and required a minimum stay in anycase. I was getting desperate but couldn’t make the find a place I felt comfortable to wild camp.

On my map I can see green spots, and sometimes those green patches have dotted green lines on them (forest paths) and sometimes blue lines (cycle paths). I found a good patch of green with both cycle paths and forest paths - surely I wuld find a place to xamp there - but when I got there the access road was private and guarded by a house, but fortunately I noticed another path, which ran along sinde the river after going under the rail tunnel.

I tunrned in, and there was a gate, secured shut with bailer twine and a grassy / muddy road leading off behind it. I parked up the bike, opened the gate and walked down some way. There were signs “WATCH OUT FOR OVERHEAD WIRES” “MAKE SURE RODS ARE CARRIED LOW” or similar. So this seemed like a public place, but nobody was here. I saw an initial campsite and decided I would stay here. I got the bike, then explored a little bit futher up and found the river and decided to setup my tent there. 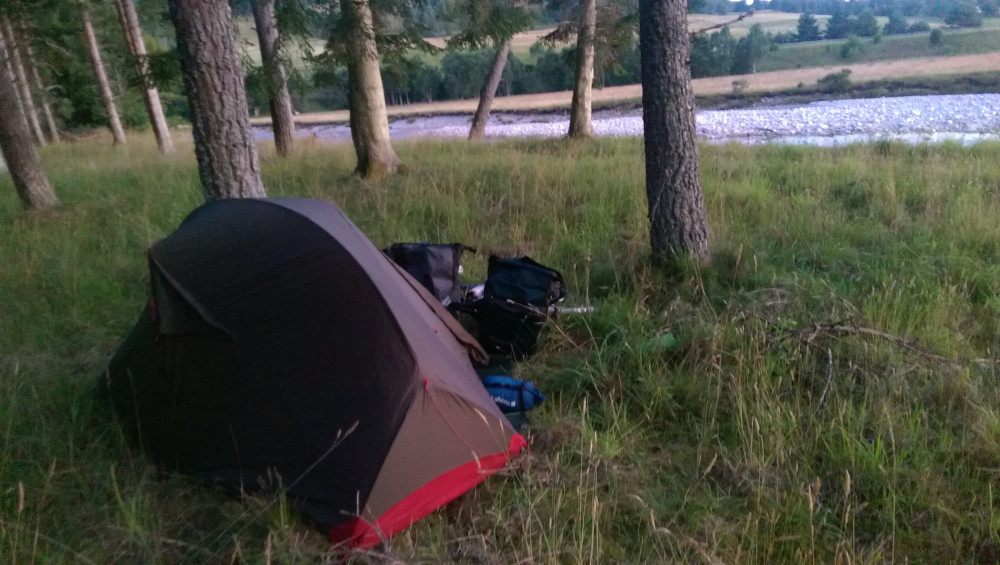 I don’t usually wild camp and I was a little bit nervous, and probably like most people my paranois gets turned up a few notches when it’s dark. I could imagine crazy people doing crazy things for crazy reasons. But it’s easy to decrease the volume of the paranoia through reason and common sense, but harder to silence it completely. Luckily whiskey helps.

« Seahouses to Edinburgh
Pitlochry to Inverness »