I fell asleep last night staring out of my open tent flap at the stars, or the aeroplanes, or whatever that bright light was which was drifting across the sky. It was cold in the morning, and I didn’t prepare myself well enough. Far colder than it was at night. So I didn’t sleep in - the cold compelled me to get out of bed and make coffee.

Surveying the scene, the river had what looked like steam rising from it, there was dew on the long grass surrounding the tent and my breath was visible.

I made breakfast (bread and cheese triangles) packed my tent with hands that became increasingly numb and left at around 7:30am.

It’s great to leave early as you get an earlier sense of accomplishment during the day. By 10am I had already covered 50k.

The weather gradually warmed up, and as it did I started changing my clothes, removing my fleece, taking off my hat and finally swapping my trainers with sandals. Then I saw this sign: 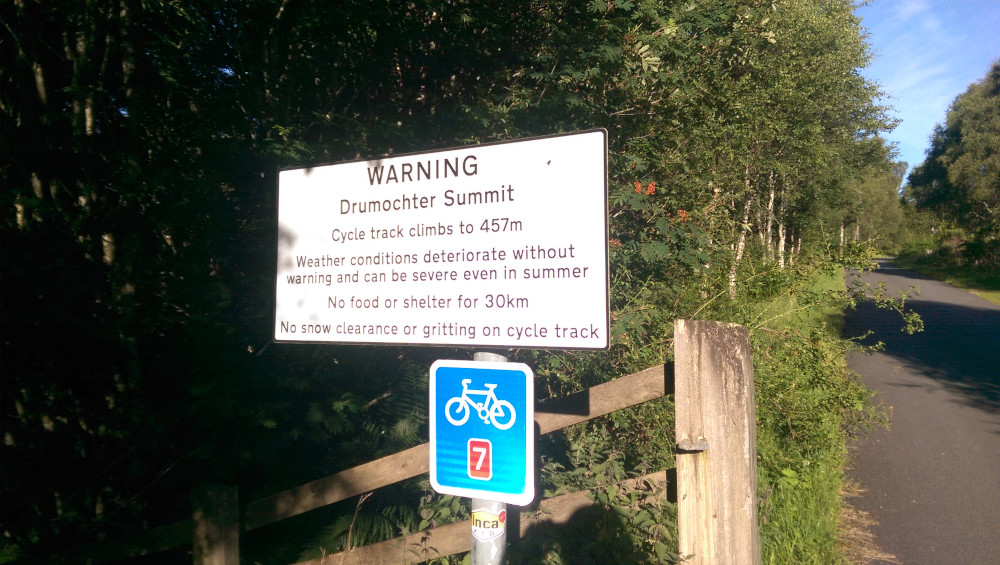 It was still cold at this point, but the sign said “no food or shelter for 30km” and I was aware that I had very little water left - maybe 100ml on the bike, and an emergency 500ml in my camping bag - I’d used the rest on my two servings of coffee in the morning.

The sign looked ominous, but 450m isn’t a great deal as far as mountains go, and 30km isn’t that far, and the weather was still perfect. 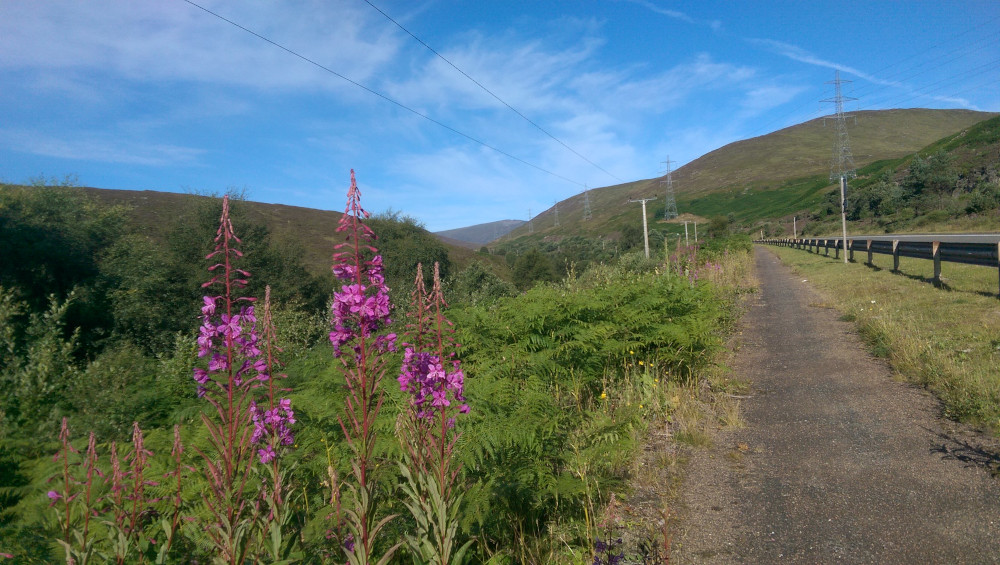 The climb was easy (it ran alongside a railway line) and was far from the typical climbs you’d expect in the Pyrenees, but the view at the top was similar: 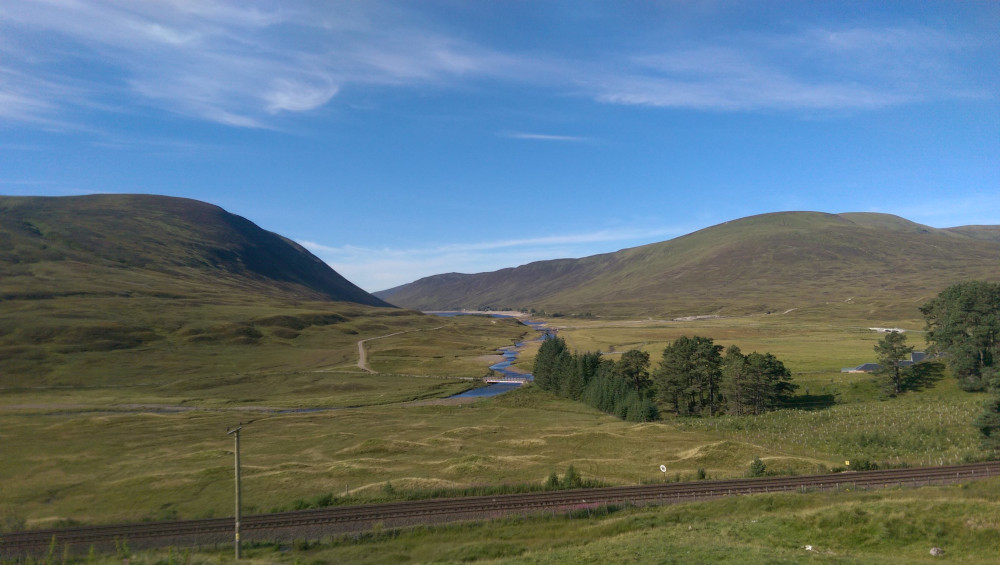 After riding some kilometers at a steady altitude of around 450m I arrived at the “summit” with a bicycle sign stating that this was the highest point on the Scottish Cycle Network.

The next town was around 5 or 10 kilometers further on, but I passed on the first cafe which turned out to be the only place in that town where I could get a drink or use the W/C (still haven’t trained my self to poo in the wild).

I carried on, as the sun started to get warmer and warmer, and hotter. The towns I passed through were not “towns” but small settlements with no shops. The cycle path joined up along side the motorway, and there was a motorway café. I stooped here for an overpriced sandwich and coffee. I wanted also to plugin my laptop and write the previous days blog post, but there was no chance. So I just ate my lunch outside and filled my water bottles in the toilet.

The heat was relentless today, and I felt that my body wasn’t fully prepared for this intensity, and I could feel my nose and a small area of my back beginning to burn.

The cycle path made diversions to historical places of interest, for example the Rutland Barracks: 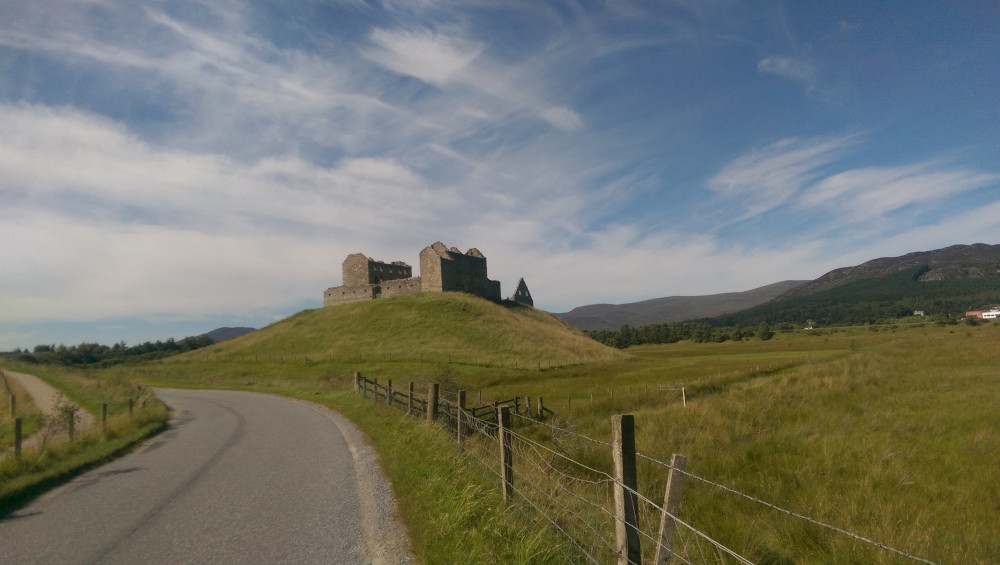 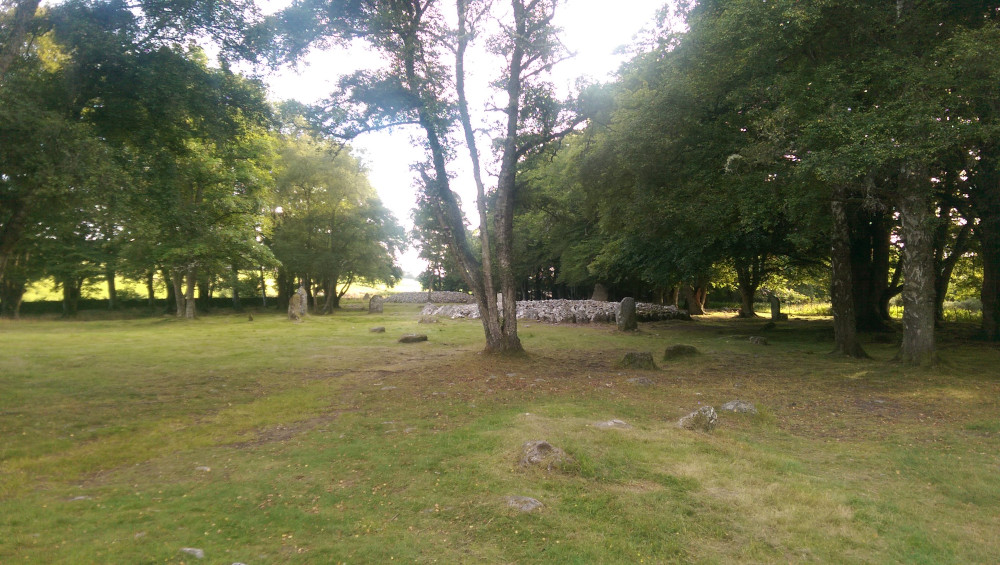 The heat became more oppressive. I approached the town of Aviemore looking for a shaded bench to sit down and plan the rest of the day, but was confronted with throbbing masses of tourists, no space to sit down, or breathe even (slight exaggeration). I carried on, with the sun beating down on me and with no further plans until finally finding a tree in a forest which offered a suitable branch to sit on where I ate lunch number two (having now covered 100k). I calculated that Inverness was roughly another 50k, and I already feeling dead - both because of the sun and because of my energy levels. 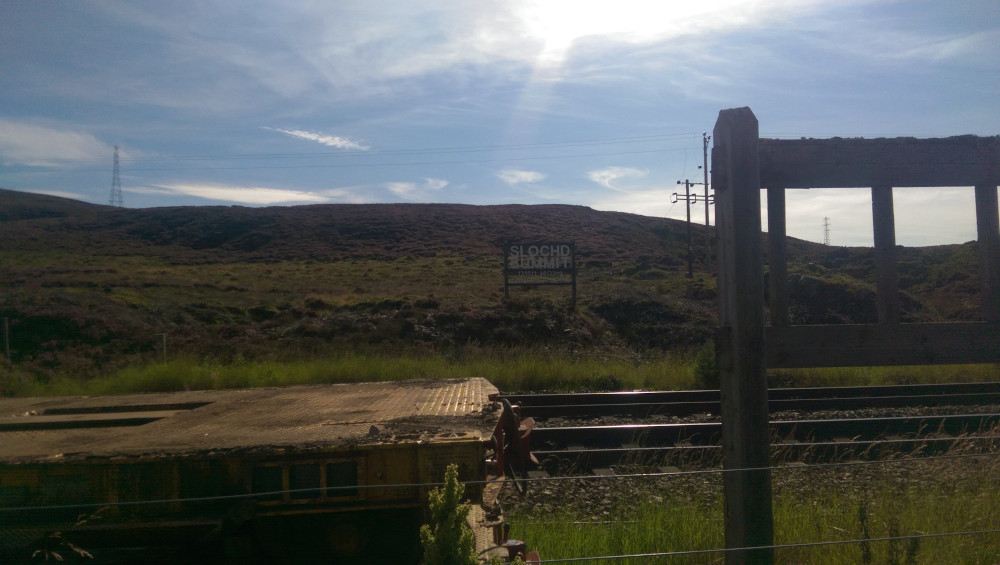 I ploughed on regardless, I purchased a beer in Aviemore at least, and after an hour I stopped, not finding a bench, but finding an abandonned bridge with a curb. I sat down and slumped against the old rock wall of the bridge watching the ants crawling all over the place as I cracked open my beer, then a car pulled up, a family taking the dogs for a walk I nodded hello, “looking hot there mate” “nice weather for it” I replied, “indeed it is”. I don’t know why I said that, it wasn’t nice weather for it, it was awful, I finished my beer and got up to leave, then another cycle tourer passed, stopped and turned back to speak to me

“You’re looking for the same thing as me!”

“Ah, no, I’m heading to Inverness”

This guy said he found an amazing wild camping place the night previously on an abandoned caravan park. He also warned me about Midges -

“Are these Midges” I enquired (since he appeared, having sweated his way up 200m of climb, he had inadvertently attracted a swarm of insects, although he seemed unaware that he had brought them with him)

“Hard to tell, until they start swarming and biting”

He recommend that I get bug spray (Deet) a Midgey-mask, and long sleeve shirt and trousers. I’m still hoping I don’t encounter these famous pests.