« Inverness to Fort William (via Loch Ness)
Oban to Tarbert »

Slept well in the hostel and left to find breakfast - hoping to find a café with outdoor seating, unsuccefull I picked up another unsatisying breakfast from a bakery - an egg mayonaise sandwich, danish pastry and a coffee (all too small to fill me up).

One of the reasons I didn’t go further yesterday was because the next part of the cycle network required me to take a ferry. Although it would have been possible to take the main road, it was very busy and I wanted to stick to the bike route, but getting the ferry at that time in the evening didn’t appeal to me. So now was the time to get the ferry.

I cycled to the top of the town and crossed the dual cariadgeway and found my way to the ferry “port”. I almost missed it as there were construction works obstructing the sign, but when I found it I saw another cycle tourer waiting.

“Aright mate, you waiting for the ferry?”

He was, and he said that the next ferry was in an hour. His name was Chris and he was cycling on a mountain bike with a trailer, and in the trailer was the 6 month old puppy “Vinnie”. They were cycling around for a month to raise money for Teenage Cancer. We had a good talk while we were waiting, it turns out there was a really nice campsite near Ben Nevis which I completely missed, he was a vegan and recommended vegan haggis and vegan black pudding, which as a vegetarian is good to know.

The ferry was a small boat with several seats inside and the ferry man strapped the bikes to the roof and we crossed in 15 minutes (it cost €3.50) On the other side I said goodbye to Chris and Vinnie - I mentioned that it would be nice to get a coffee and Chris offered me some tablets to put in my water which contain, among other things, caffine and give the water a cola flavour “because it’s a bit boring drinking water all the time and it keeps you going”

I think the drink did keep me going today, and I’ll try and find some more and will be checking on Chris’s progress on the internet.

After I left Chris I cycled down the coast of the other side of the Loch - it almost seemed like a pointless crossing as in 15k you had to get another ferry back to the original side - it was to avoid the main road, but it was also very scenic and quiet. 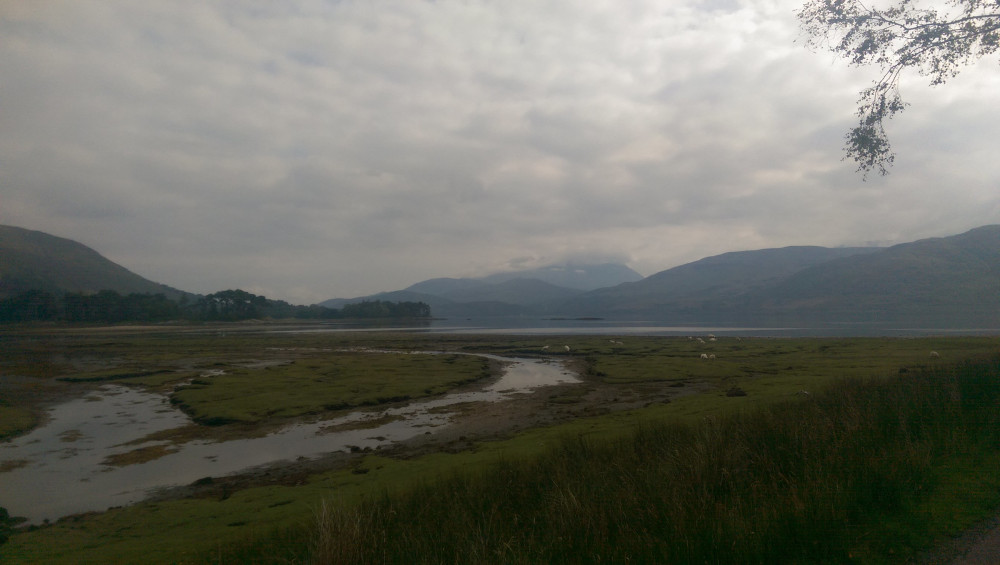 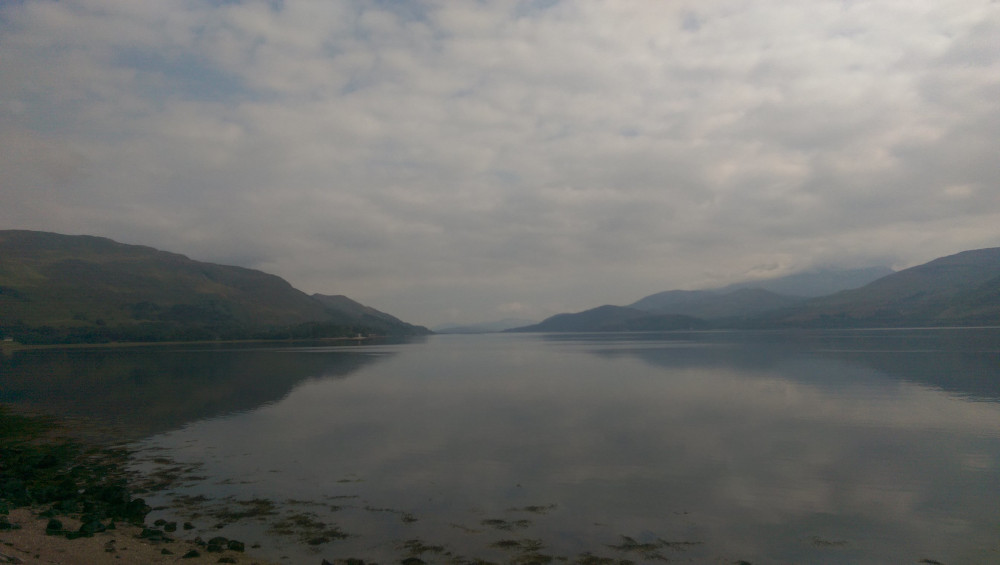 The ferry back was more regular and was already diembarking cars and lorries when I arrived, so I almost immediately rode on - and was politely shouted at as I should walk “for your and everybody else’s safety”, I was at the end behind me were two huge trucks full with timber. They didn’t charge me anything for the 10 minutes crossing. 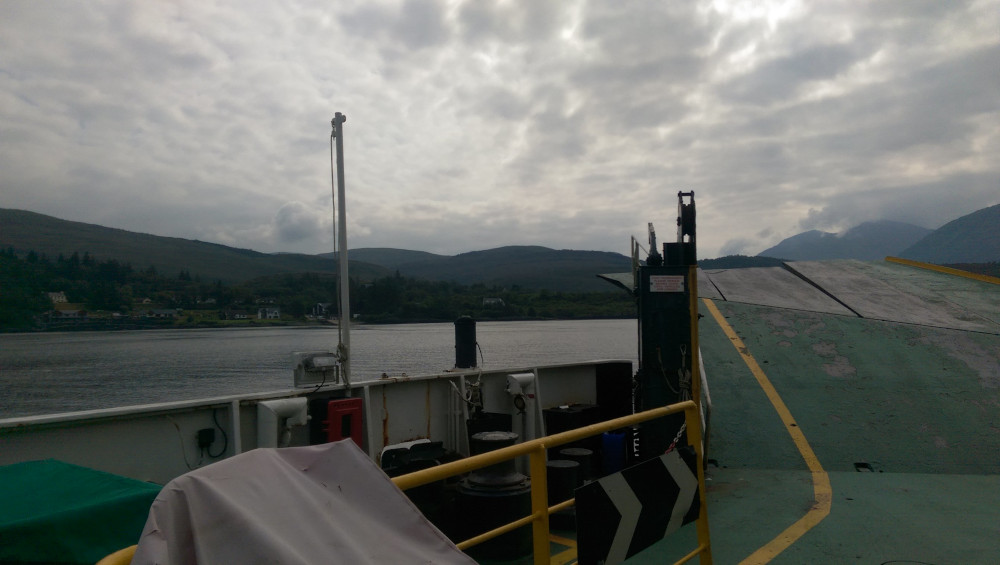 The cycle route became the pavement on the main road with an official disclaimer “This cycle route follows the main road for the next 5 miles - it should be wider than it is”. After this I crossed the main road and continued obliviously, listening to my music, until 45 minutes later I checked my compass, and then checked my map - I had taken the wrong route and had ridden clockwise around a cycle path that tracked the coast and led back to where I originally joined. So I ended up doing 10 extra kilometers in a circle, and was a nice route though. 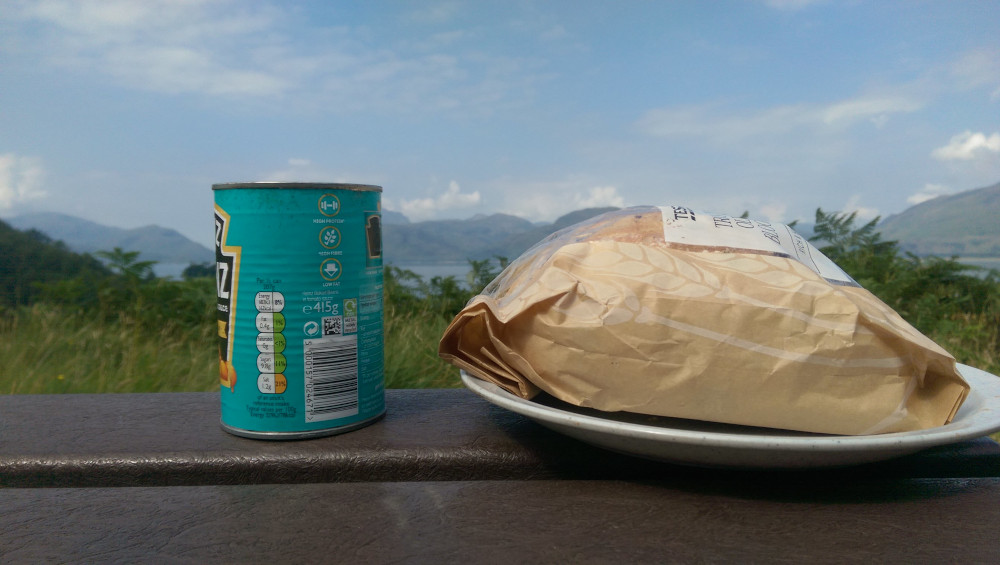 I passed most of the time listening to music, but at one point recited poetry aloud - I had memorized several previously, but now I can only remember a few, I was trying to recall “Au Lecteur” by Charles Baudelaire in French,

“Like a wretch, who kisses and eats the martyred breast of an old prostitute”

My French isn’t that good but then I realised that two old ladies were staring at me from a bench at the side of the path. I waved and smiled, I’m pretty sure they didn’t understand French. 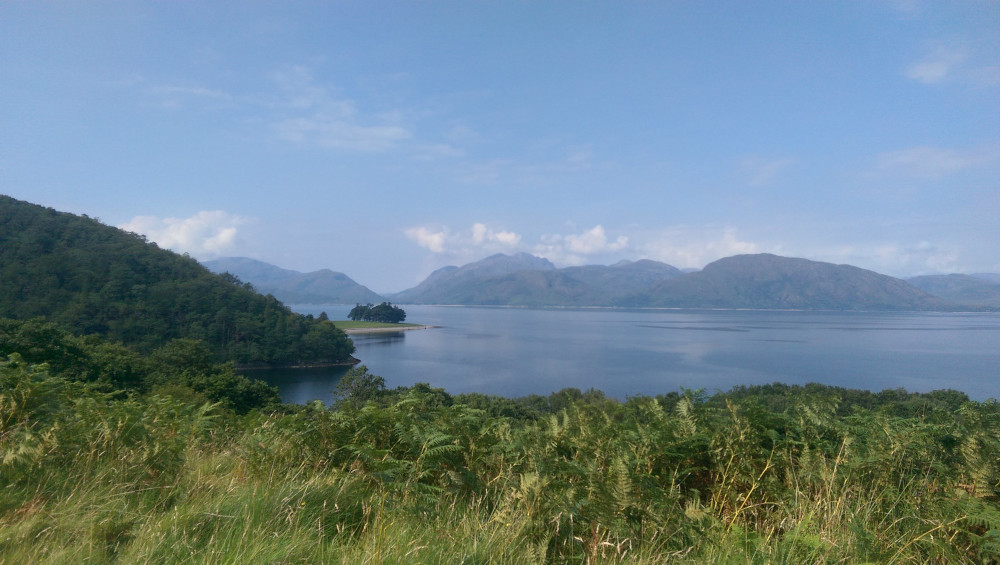 I wasn’t sure where I would stay this evening, but I knew I would head to Oban. I followed the cycle route, which was very hilly at times. There were two hostels in Oban, and two campsites closeby further down the coast, I reached the point where the cycle path turned towards Oban, but there was a dilemma: Oban was a dead-end and the town was 2.6 miles, and the campsites a further 2 miles on top. I could continue east, but there were no shops for quite some distance. 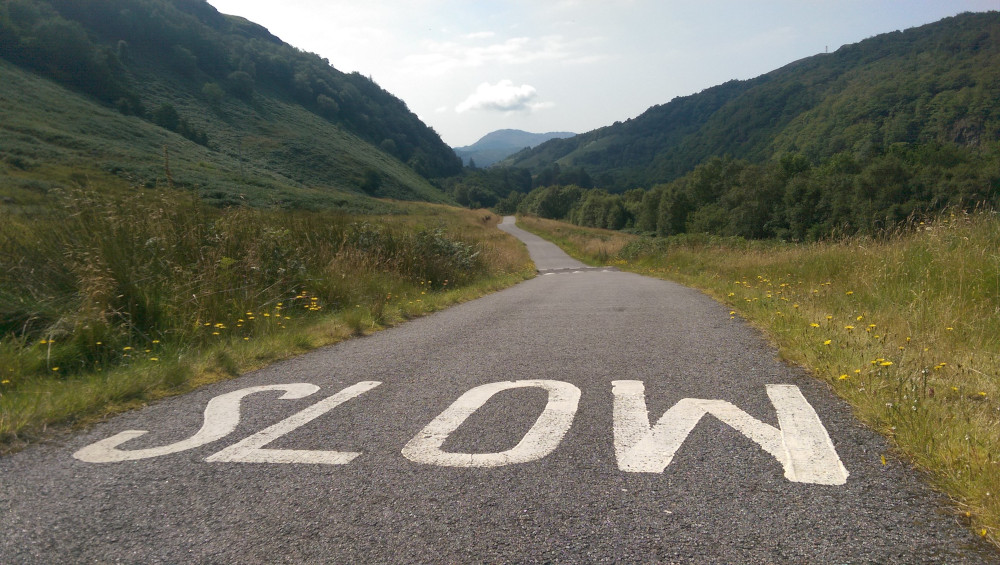 I had plenty of water (I filled up all my bottles at a caravan park on the way) and I had enough food for dinner, but not breakfast. I could either go to Oban and try my luck at the campsites, then cycle back, or I could continue and wild camp. I decided to go to Oban. 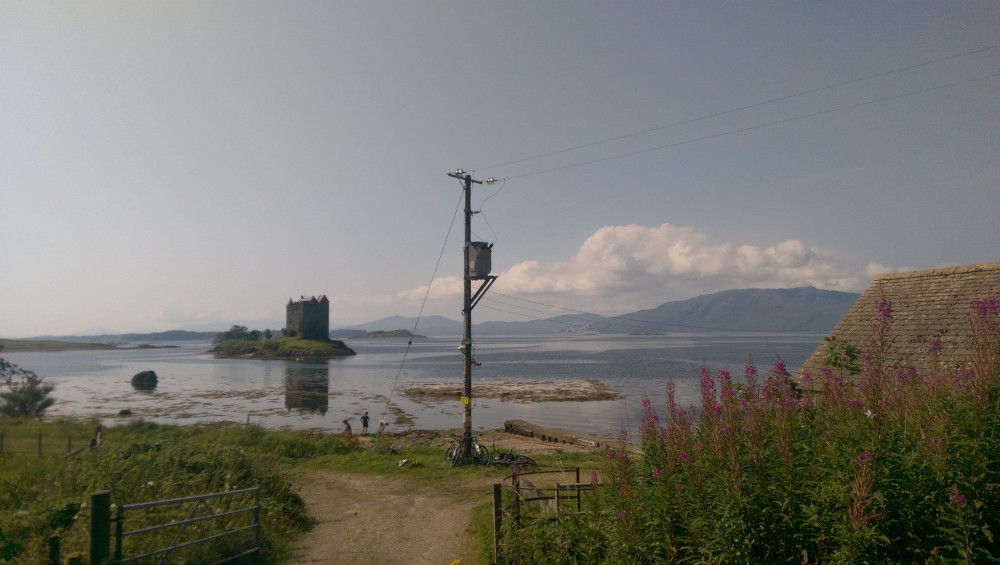 As I was cycling I regretted this decision more and more - the route wasn’t “down hill” it was significantly “up down up down up down” - I was going in the wrong direction for the sake of a campsite and a supermarket.

To make things worse, I passed through Oban without going to the supermarket, and when I got to the campsite it was shut. I had cycled 4.5 miles and it had taken maybe 45 minutes. But there was another campsite, which was a mile to the east. I rode up some more steep hills and arrived it said “Caravan Park” and I considered it then cycled away, then stopped, then cycled back - it would do no harm to ask, and I would be able to stop now. 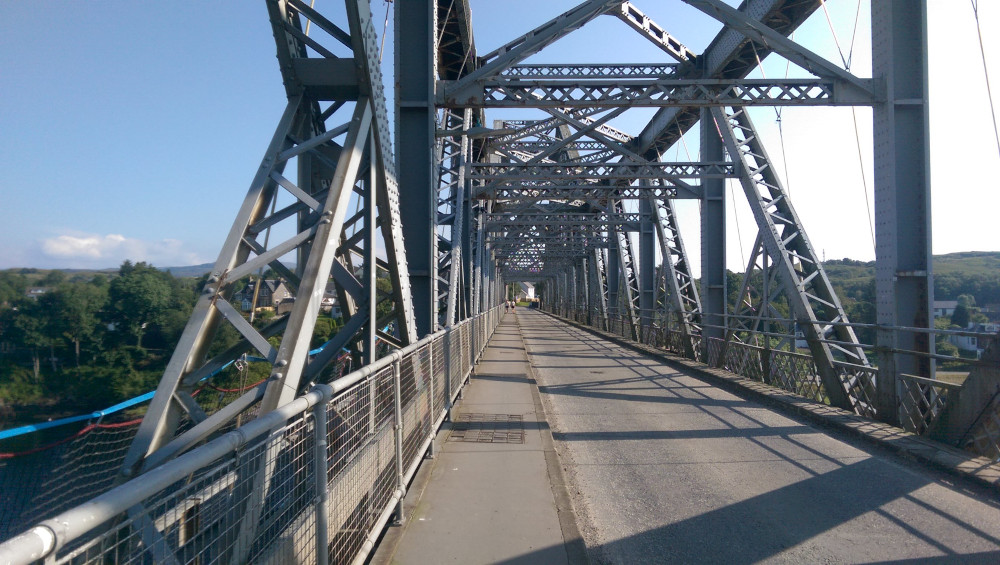 As I rode in a large bearded biker said something to me:

he said something about the heat and the hills:

“I don’t think a’ve got the same endorphines as you pal!”

“Aye it’s down there, you press the button”

I went down there and pressed the button and a guy promptly approached on a scooter and cordially charged me 10 pounds and pointed to where I could camp. 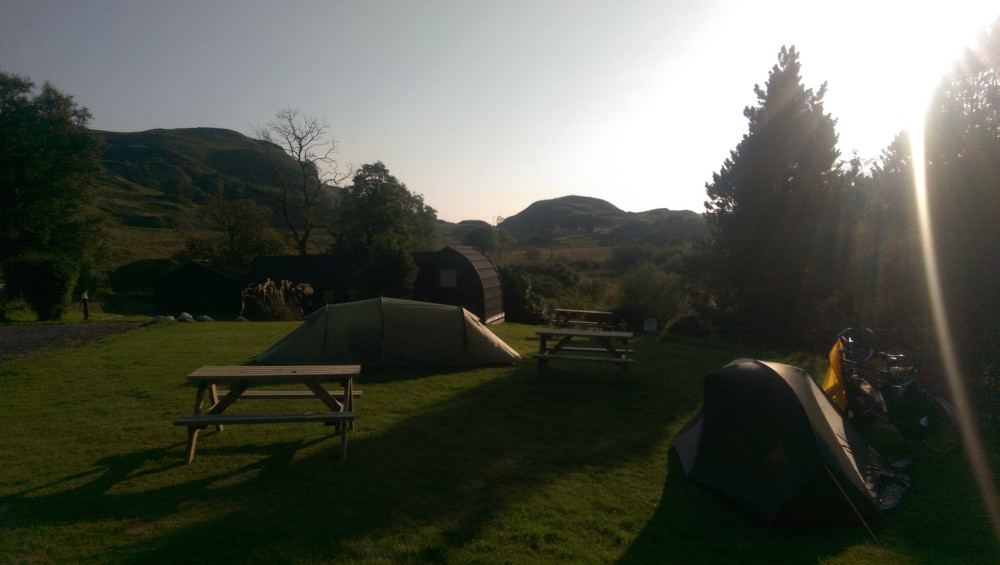 I’m glad I did stop, as the campsite is really nice, it’s extremely quiet and I’ve had some nice chats with some of the other campers.

Today wasn’t a good day for distance, I managed to do 100k, but I probably lost 20k by getting lost and then going to Oban. I have arranged to stay with a friend near Glasgow in Eaglesham - ideally have liked nearer, but I think I can be in Eaglesham on Friday evening, and at my brothers on Saturday evening.

« Inverness to Fort William (via Loch Ness)
Oban to Tarbert »