TL;DR; Maestro is a package maintenance automator which is in development.

It’s Christmas and Phpactor needs to be upgraded to PHP 8.0, but Phpactor has many packages:

Most of these packages were created almost 4 years ago, and have been updated little by little as necessary.

Even editing the composer.json file to allow PHP 8 for each repository is a big task - not to mention needing to migrate from Travis to Github Actions (as Travis has become unusable in the past months with build times sometimes taking an hour) - and that’s before I can even start manually editing all the test suites to be compatible with PHPUnit 9.0.

So there had to be a better way.

Last year I regretted spending upwards of 3 months of my personal time working on the original project called Maestro. It was designed to solve this problem, it was basically a parallel task runner for repositories, very similar in concept to Ansible. You could use it to maintain metadata, run tests, and, well, pretty much do anything. It also generated beautiful graphs:

But it had problems:

The JSON syntax was nice, and quite powerful (it was pre-processed and you could do some pretty nice things with it). But it meant you couldn’t iterate, or do any of the other things that you might like to do if you were actually programming.

In the end I spent so much time staring at JSON and trying to figure out what was wrong with the model that I reluctantly gave up - it wasn’t worth the time.

As previously mentioned Travis has just become awful since it got taken over by new management, so I decided to migrate to Github Actions.

My decision was helped when Oskar Stark made a pull request on PHPBench and by doing so illustrated the process of adding Github Actions (would I read documentation?).

But doing this on scale was challenging, so I thought back to Maestro and then I thought about the newly released PHP 8.0 and I decided to write the entire thing from SCRATCH.

In A Weekend ¶

I had a specifically free weekend, and I worked on it relentlessly. I think by the end of the weekend I had something comparable, and more powerful, than what had taken 3 months previously.

The new Maestro has:

I was quite depressed the previous year when the first Maestro failed - as it had appeared to waste so much of my time - but it wasn’t wasted.

Many of the good ideas from the first Maestro have been carried across. I think there is a lesson to be learned which has something to do with the Sunk-Cost Fallacy. The best thing for the old project was to start from scratch and abandon all the complicated crap, but that’s not easy.

Maestro 2 (henceforth to be known simply as Maestro) is now basically working and I have used it to (in single upgrades):

the above links are to the pipelines

How it Works ¶

You define an inventory. Inventories contain repository definitions and variables:

You then define a pipeline - the pipeline is passed the configuration node and needs to return a Task:

In practice you will iterate over the repositories in the configuration node and check them out, then perform operations on them.

The tasks them selves are simple data structures, and with PHP 8.0 we can use named parameters:

Each task has a Handler which contains a co-routine:

oops! that doesn’t contain a co-routine, but it returns a promise. The point is that you can use co-routines.

The each handler is given a Context and returns a context, the returned context gets copied to the next task.

The context can hold services and variables. Above we get the Filesystem service from the context, which is aware of the current working directory for this stage of the pipeline.

Tasks can also publish reports and if you’re in a hurry you can create a DelegateTask:

The delegate task requires no handler, and allows you to quickly encapsulate more complicated tasks.

This evening I performed the PHPUnit 9 upgrade.

Report on the CI status from GH actions 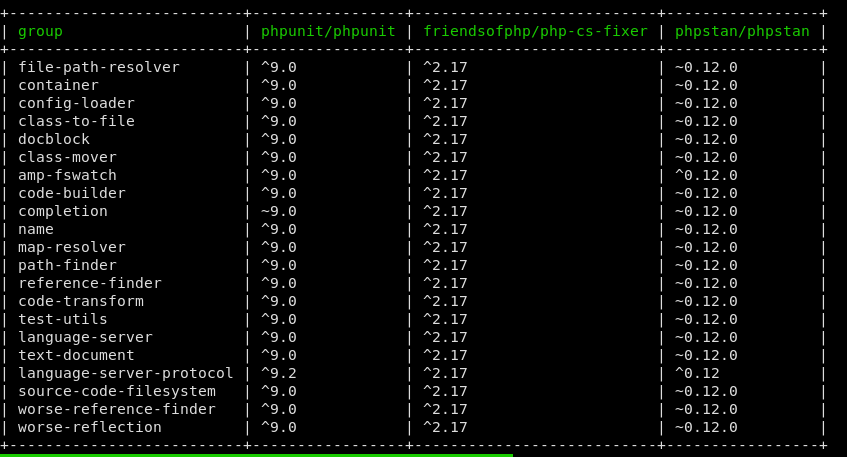 Several of the 42 packages needed small manual fixes before the CI could pass, but in general the amount of time saved was huge (and Rector did a wonderful job).

Conclusion and Next Steps ¶

In total the project has cost more 4 weekends now, but it has already achieved much more than the original project.

The package is still in nappies - the basics are there, but I’m only starting to notice some common use cases, there is no documentation yet and it may eat you or your packages.

I’m using it now to manage individual repsotories - but it could be used to migrate to and manage a mono-repository (including versioned package splits!), I mean, you could use it as your build system, or orchestrate servers with it if you want, probably not a good idea though.

I’m hoping it will evolve more in use, and make it more accessible should anybody else want to use it.