PHPBench Alpha 5 as been tagged.

I tagged PHPBench Alpha 1 in about 5 months ago since that time numerous improvements and features have been introduced, I will talk about three of them.

One problem I had when developing benchmarks is that it’s difficult to debug when the benchmark launches in a separate process, for this reason there is now the local executor:

Will run the benchmark in the same process as PHPBench, allowing you to do whatever you need to do (var_dump($foo);die()) to debug your benchmark.

The default progress logger has been simplified. If a --ref baseline reference is given it also shows the percent difference:

If an assertion fails it is highlighted RED, if it is tolerated it is CYAN and if the assertion passes unambiguously it is GREEN.

There will be more work on the real-time progress output in subsequent versions reducing the need for using --report=aggregate allowing faster feedback.

The original assertion DSL introduced in alpha1 was quite limited. Probably the biggest issue was that you could only assert against hardcoded and pre-calculated values, other than that it only allowed simple comparisons.

The assertions now use a custom expression language is much more comprehensive featuring (for example) arithmetic, logical operators, operator precdence, and functions.

It provides full access to ANY metrics which were recorded against an iteration, by default time and memory - but extensions could theoretically provide, for example, the number of function calls. 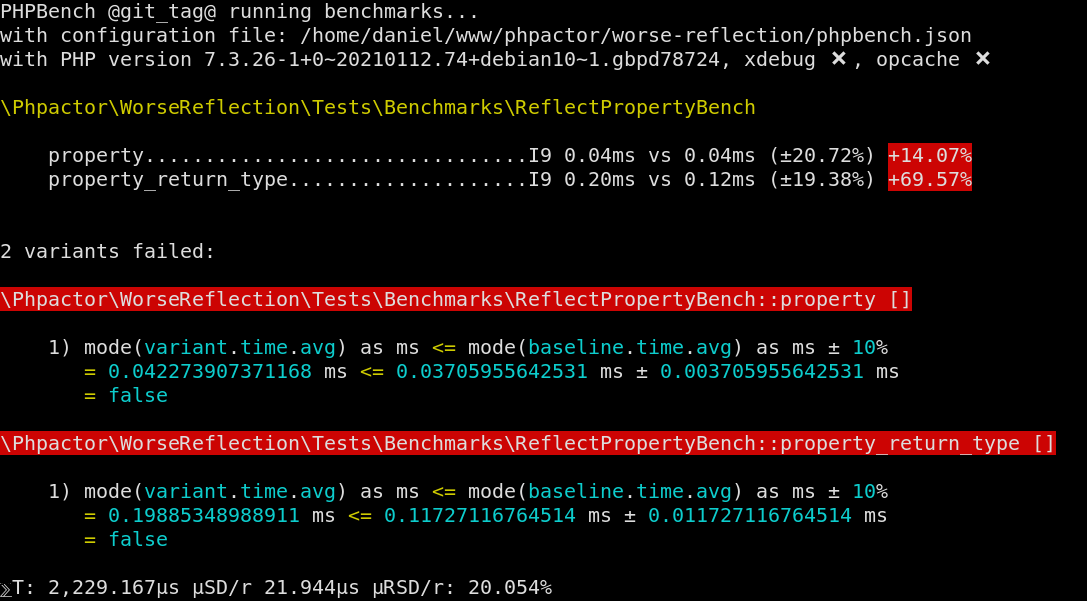 The new examples in the documentation are included from code which is executed in continuous integration.

I think PHPBench 1.0.0 is getting closer. The new expression language can also help with other aspects of PHPBench: