This song is a cover of “Fansong” by Dethklok:

I recorded it between 14:00 and midnight on Saturday, the idea was to try and learn stuff. As such it may not actually count towards my 2022 goal of recording a song every month (ideally on the topic of software engineering).

The room I’m recording in causes lots of reverb to be picked up by the microphone. This means the vocals are more “fuzzy”. I used a noise gate to try and clean them up (automatically cut the sound when the level drops below a certain threshold), but it only goes so far. Ultimately I need to find a way to improve the acoustics of the room.

I tried to faithfully copy the drums. I improved my MIDI editing capability by discovering how to select multiple notes at the same time - the trick is to use internal edit mode vs. draw mode (unlike other DAWs the editing in Ardour isn’t that context sensitive). This allowed me to more effectively compose long regions of MIDI without resorting to copying a single (linked) region multiple times.

The guitar is tuned down to C. I didn’t spend a huge amount of time learning the solo, but tried to approximate it, which was interesting (I cheated and tuned down my top string to tap the first section). I think it was all in the harmonic minor scale.I could’ve spent longer learning trying to copy the final bars (what I recorded is far off from the original) as it’s not the sort of thing that I’m familiar with currently.

Having multiple guitar parts was also nice, panning them left or right, and using different amp simulations. Breaking out the guitar parts to separate tracks and boosting for the purposes of boosting or decreasing the volume.

After recording all the guitar parts the sound was already pretty faithful to the original, but I hadn’t yet put down the bass part. I listened to the original, and I couldn’t pick out the bass guitar at all, did it even have one?

In anycase I did lay down some bass, but it’s quite low in the mix and is completely in step with the guitar parts. I added a bass “enhancer” (see “exciter” below).

On my previous recording I had used heavy compression on the vocals, which seemed to improve the sound, but there was still clipping and the volume was not as uniform as it could have been. I just rediscovered “limiter” which is a more aggressive compressor and really helps to avoid clips and keep the vocals at a constant (or at least limited) volume.

This limtier is part of the calf plugin suite installed with:

Previously I used EQ to bring vocals out of the mix by dropping the bass and boosting a higher frequency. From my university days I remember using an Exciter. This boosts harmonics and generally makes, erm, the sound more “exciting”. 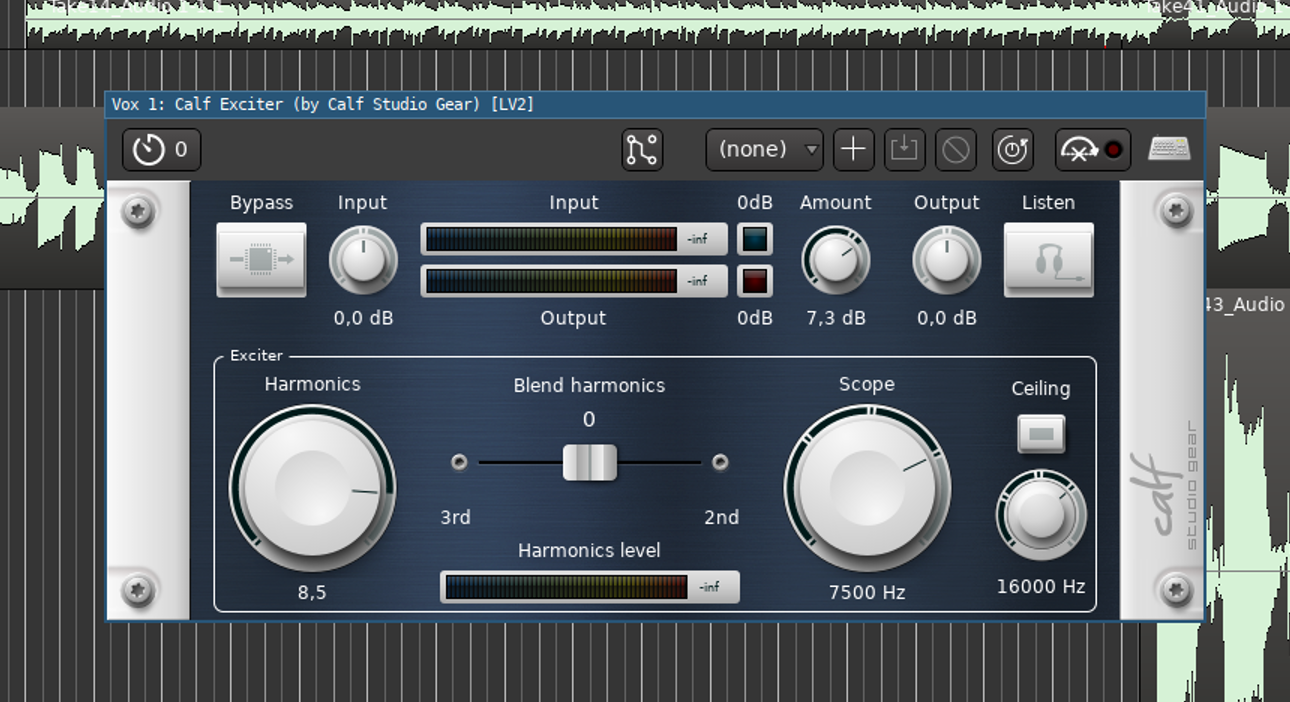 The exciter is provided as part of the calf plugin suite referenced above.

I started this month by deciding to order a DAW (Ardour in this case) controller. I went to Just Music in Berlin and got a Presonus Fader Port. It didn’t work very well with Linux, or at least it required a firmware upgrade which in turn required a Windows or Mac machine. Besides that, after doing some research I decided there was a better option: 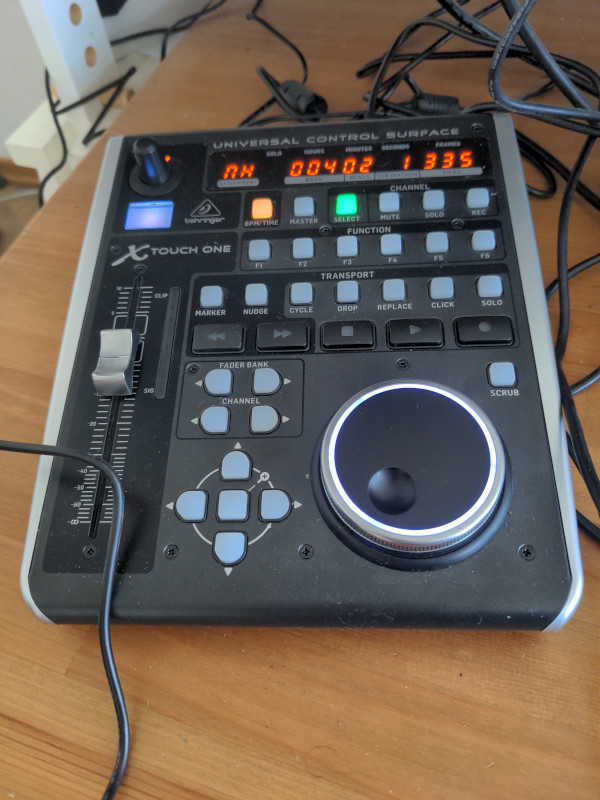 The Touch One is explicitly supported by Ardour and generally looks to have better features. It cost around €170. Practically I’m not sure I made the right choice however…

It has a dial to scrub / navigate through the track, but I’m not using it that much, - it’s quicker to use the mouse.

I use the transport buttons (play, stop) and have customised some buttons to set loop ranges. The fader is almost useful and has a tiny display which shows the name of the current track, but you can only see it if you put your head directly over it. It’s often quicker to click the track in Ardour than to use the channel selector on the mixer, at which point you may as well adjust the volume with your mouse.

13 years ago I had Behringer BCF2000 which had multiple motorised faders and cost around the same amount. Having mulitple faders really makes it far useful for mixing as it’s more intuitive. I think I would happily swap this single-channel fader for the BCF2000 again, or upgrade to the X-Touch which is seems to combine the BCF2000 and the TouchOne. 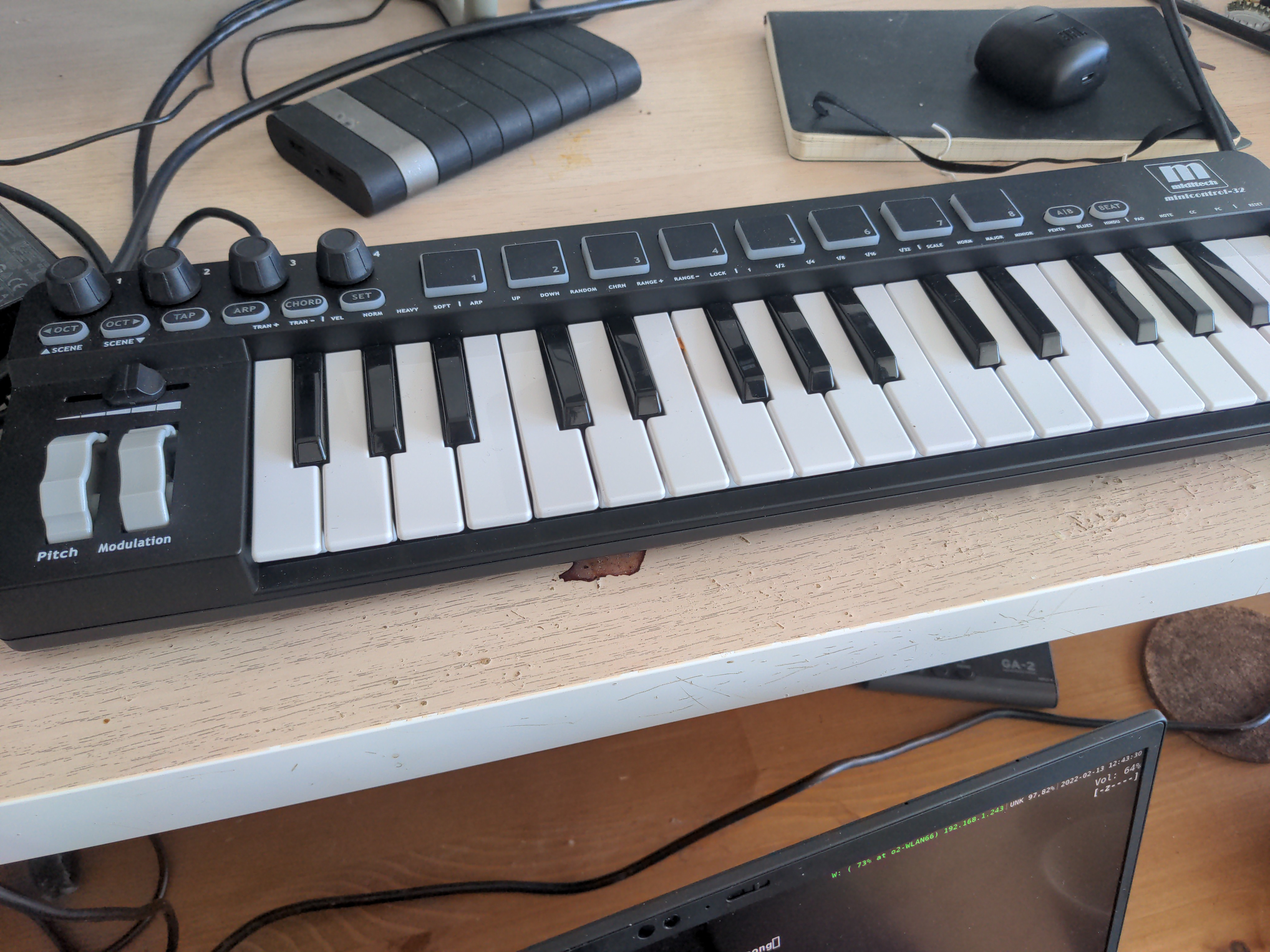 I have a digital piano with “MIDI” support, but it’s a huge thing and it’s on the other side of the room. I wanted to be able to quickly create MIDI tracks, especially drums.

I got this thing in the same ill-prepared shopping outing as the PreSonus. It cost around €65 and features a row of “pads” which I thought “ha, maybe that’s useful for drums or something”. The pads are not useful for anything as you need to hit them with a hammer in order for them to trigger.

Otherwise the keys don’t feel great but are functional, I can switch the octaves easily.

The main problem isn’t really the keyboard as it is Ardours ability to record MIDI, there is currently a bug where the first note of a region gets cut off if you size the region to the beat (as if that the MIDI note started a millisecond before the start of the region) this behavior persists even if you quantize the notes.

The keyboard has been useful for exploring the sounds available.

Not physical equipment. This is the AVLDrums plugin. Last time I used DrumGizmo. Like DrumGizmo the AVL drums can be split out into multiple channels.

The “soundfont” provides two kits: Black Pearl (used here) and Red Zeppelin, the drums sound more “artificial” in this track, but in the previous track I applied more effects on the drums.