I am now sitting in a ferry teriminal in Craegvany waiting for the Stena Lines ferry to Belfast. Unusually I was instructed to wait inside the terminal until somebody will show me to the ferry rather than waiting with the cars outside.

From Belfast I’ve decided to head north and follow the northern coast in order to join the EV 1 (Euro Velo 1). I had intended to follow the EV1 inland from Belfast, but I couldn’t see any reasonable accomodation en-route.

I arrived in Scotland 5 days ago, staying at my brother’s. I’ve been staying in a caravan in the garden. The first three days passed by extermely quickly, and on day 4 I thought it would be prudent to check my equipment. 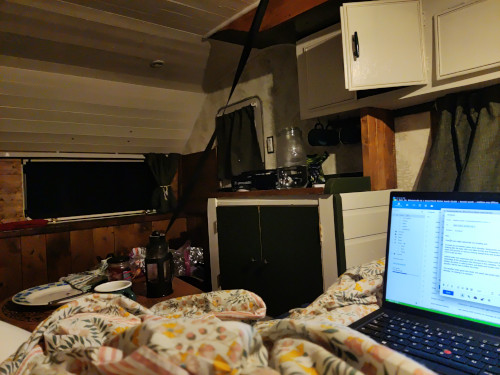 interior view of the caravan

The bike was as I left it, not in perfect condition, but good enough. We hosed it down and my brother fixed the broken mud-guard by riveting a piece of aluminium to it. 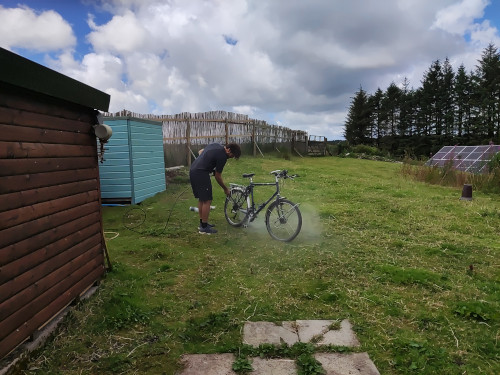 Next I realised that in my hurry to leave Berlin I had almost completely neglected to bring any suitable clothing. I had several pairs of socks and boxer shorts, two pairs of shorts and a vest. I had no trousers, fleece, no t-shirts, Aside from clothes I was also missing a multi-tool for the bike, a coffee machine, and various other items. 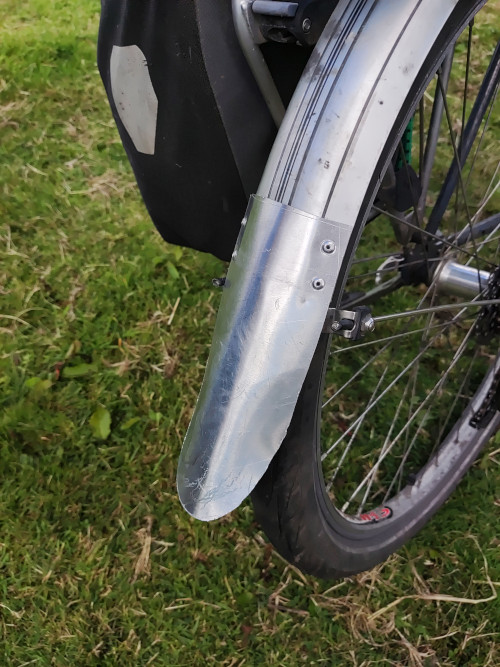 Yesterday we went on a shopping trip to Dumfries and I got everything that I needed, except the Mocha Coffee Machine. I had to make do with a french coffee press, which I’m sure will be smashed to pieces in the following weeks.

The weather has been pretty shitty for the past 5 days, with occassional breakthoughs of sun, but the weather for the next week looks better, nethertheless I’m preparing myself to get wet.

From the ferry port to Larne

The crossing was uneventful, it took about two hours, when they called for the people to return to their cars I went down and got lost in the maze of lorries before finally finding my bike at the back of the ferry. I pulled it out and lined it up behind several motorcycles and waited, 10 minutes later the motorcyclists started up and I followed them only to be stopped at the exit by a member of the crew and I had to wait until all the cars and lorries had left before I could go.

When I left the port I checked my bike, the cycle computer wasn’t working. There is a magnet on the wheel spoke which needs to pass closely to a magnetic switch on the stem, after fiddling with it for a few minutes I gave up. My brother took the liberty of “fixing my brakes” as they were loose, unfortunately they were too tight to let the wheels pass them without contact on the wheel, so I loosened them up again. Everything else seemed fine and the bike was running silently. I’ll try and adjust the cycle computer so it works again later.

I passed a Greggs bakery and stopped to get some lunch. I got an espresso and a ploughman’s roll for about £3. 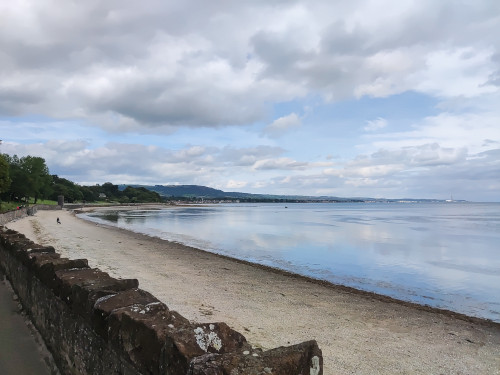 Heading up the coast

I am now on a campsite at Larne. I couldn’t find the reception and when I asked somebody she pointed and there it was in plain sight. The office was closed by I was approached by a lady who summoned the proprietor. “It’s normally 17 pound, but as you’re on a bike it’s 10 pound and it’s cash only” he waited. Taking the hint I searched my wallet, I didn’t have any 10 pound notes, but I had a good amount of change and had exactly 10 pounds. 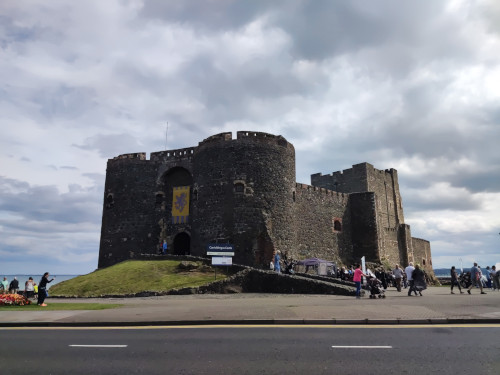 When I pitched my tent my neighbor stuck up a conversation “how far have you been?” “only 30k, first day”. He gave me some advice and told me to avoid a certain road because it was very steep, I replied that that’s probably what I’m looking for. He mentioned that he was going to Copenhagen next week to do a full iron man but that he was very impressed with what I was doing (cycling around the whole of Ireland) I replied that it’s actually pretty easy, aiming to do an easy 100k a day and that doing a full Iron Man was something else entirely.

I have, however, only done about 30k today, the ferry got in at around 2PM and although I could have gone further I thought it better to take it easy. I haven’t done any training for this tour and it’s probably good to work my way into it.

After pitching my tent I went to the supermarket, I needed a lighter for the gas stove, and thought I’d get some tobacco and maybe some whiskey pass the time. They didn’t have any booze at all, and it was only after paying I realised the tobacco (30g) cost 28 euros! In Berlin it would cost maybe 10.

On the way back I had some sharp pains in my ankle. I’ve had a injury (presumably from running) for almost 2 years now and it doesn’t seem to get better, although it’s only a problem after running, and sometimes after cycling. It doesn’t seem any worse than it has been at any other time and it’s only a problem when walking, and on past experience it will get better over the next days.

Tomorrow I’ll try and do 100k to Portrush, including the road that my neighbor warned me about (while also saying that it was beautiful).There seems to be a fair number of campsites on the way, so that shouldn’t be an issue.

Now I’m going to try and cook some baked beans.