Day 2 - To the Giants Causeway 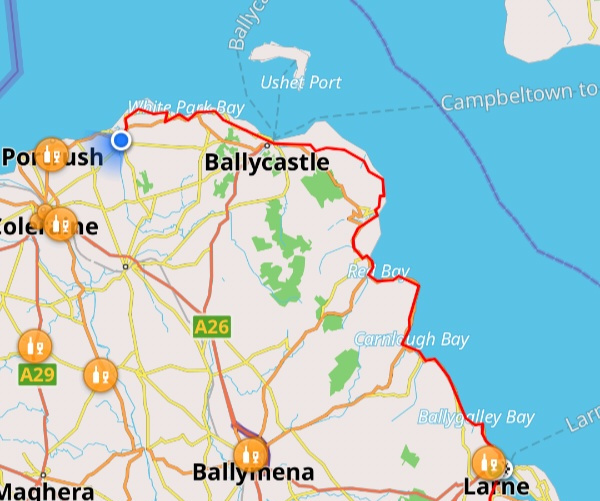 Currently sitting in a hostel in dinning room in Bushmills eating chips-cheese-and-beans[1]. I just had a conversation with an Australian who is riding around the coast on a Brompton bike. I’m drinking a ginger beer and it’s been an interesting 24 hours.

Last night the campsite was very noisy, there were 6 year old kids running about everywhere and a group of 14 year olds having a small party in the next field (not part of the campsite) blaring house music through a portable speaker. I decided to go for a walk, when I came back I decided to fix my cycle computer.

I spent 10 minutes running the wheel backwards and forwards past the magnet, changing the position of the spoke magnet each time to no effect - no signal was getting through to the “computer”. Then I saw a stray wire - the wire connecting my computer to the receiver was severed. Using my fingernails (I couldn’t find the knife) I pulled the insulation off the wires and twisted them together before wrapping the bound wires in gorilla tape. My cycle computer is working again now. 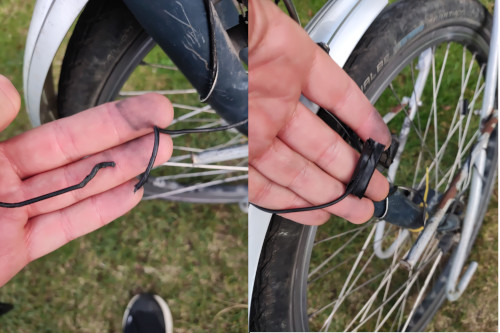 Before and after: fixed with fingernails and good intentions

The blaring-music kids in the next field seemed to have developed an animosity with the 6 year olds as a girl started shouting the most revolting abuse at a six year old boy “you fat f–k, you c–k sucker, how old are you? suck my ass” and so on, and it just went on and on. She was clearly enjoying channeling her hate at this 6 year old kid and his friends.

My neighbor went over to ask them if they could keep it down “Sir, are they your kids?” “No they are not, but I don’t want my kids listening to that language” “I’m sorry Sir, but " and then she tried to justify it before deciding to redirect her anger at this burly Full Iron Man participant “you c–k sucker, you dirty old man, why don’t you suck a dick” and so on (they were doubtless emboldened by the large fence between them). Perhaps sensing that they had gone too far they then left and did not return.

After this episode there were only the kids running about playing games until 11PM and then two scottish blokes drinking, laughing and belching until 1AM. I n the absence of ear plugs I resorted to listening to music for programming for 2 hours before it was quiet enough to sleep, and I slept well, waking up at 8 and, after a quick shower, was on the road at 9AM.

My destination was Port Rush, which by an optimistic calculation was 100k away. I headed north and stopped at a Spar to get a coffee. I sat on a bench outside and a squad of road-cyclists arrived. They struck up a conversation I said I was heading to Torr Head, they told me to not go to Torr Head.

My Iron-Man neighbor from the previous night told me to avoid Tor Head and I probably would have avoided it in ignorance, but when somebody tells me not to go somewhere because it’s “too steep” then I will go there. 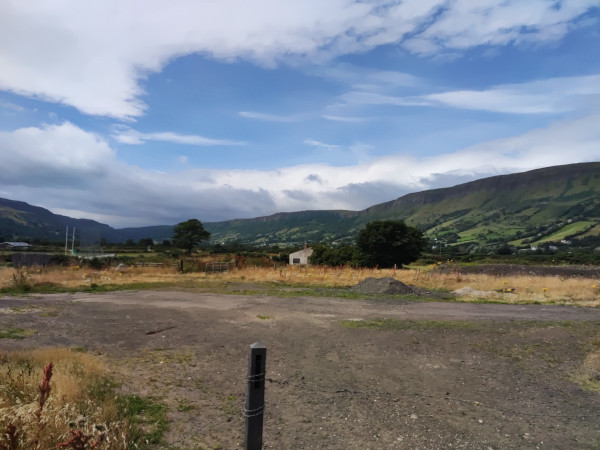 I decided to listen to some music, unfortunately I realised I had no music and I didn’t want to stream music on Spotify (to save bandwidth ha ha ha ha more on this later) but I did have Megadeth (Youthanasia) downloaded. I listened to that for an hour and stopped for lunch. I decided to transfer some music from my laptop. 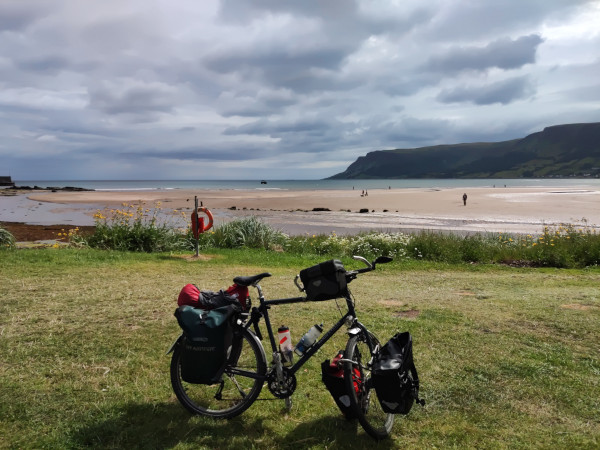 Bike on the beach

I used an application called Syncthing to transfer the music from my computer to my phone, I believed that it would transfer the music directly from my laptop to my phone via. the Wifi tethering, I assumed the laptop would be on the same network as my phone so transferring via. the internet would not be necessary. I was transferring 10GB of music, and after 2GB the transfer rate tanked. And I thought “oh shit I’ve just transferred 2GB over the internet and burnt all my data roaming allowance”. It seems I still have around 4GB of 6GB left, so 🤷 maybe it’s fine.

After following the coast road to Cushendun I started the first of 3 or 4 very steep climbs in undulating terrain. As I started I realised that I couldn’t change to my largest gear on the rear sprocket, I stopped and increased the tension on the gear cable. Without that high gear there is no way I could manage a 33% (so one of the cyclists said) climb. At some points going at 3kmph and twisting from one side of the road to the other. It was hard work and the climb peaked at around 320m before basically descending 3 or so miles to Ballycastle. My legs were struggling and sore, but I pulled through. 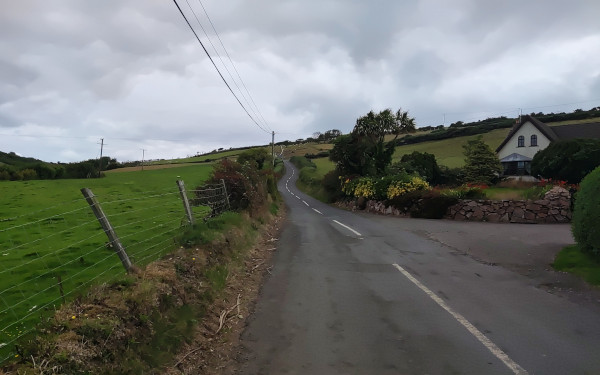 The road was already quite steep at this point

The Tor road was a small, minor, road and I was relieved when I saw the A road up ahead. as I crossed the junction a police 4x4 came round the corner and surprised me, it stopped directly in front of me as I was half way across the road - so that my bike was in the middle of the road with it’s tail in the path of potential traffic. The policeman wound down the window and I cycled towards the back of the van to get clear of the other side of the road before he started lecturing me.

“Where’s your helmet?” “You’ve got no high-vis jacket” and he scrutinized my bike evidently looking to chastise me if I had no lights. “Is it a legal requirement to wear a helmet in Ireland?” “It may well be a legal requirement but it’s not safe to not have a helmet, we’ve had fatalities on this road, on this corner” “have you got a helmet” “no I have not” and he went on like this for some time while I was stranded in the middle of the road on a blind corner with his 4x4 blocking the traffic. He seemed like a bit of a c–t. He was very passive aggressive throughout “take care yeah” “yeah, thank you so much mate, you’ve been a great help”. It’s not a legal requirement to wear a helmet and I’m pretty sure the only irresponsible behavior was them stopping me half-way across the road. Of course for the next hour I involuntarily replayed the situation and all the different ways I could have handled it. 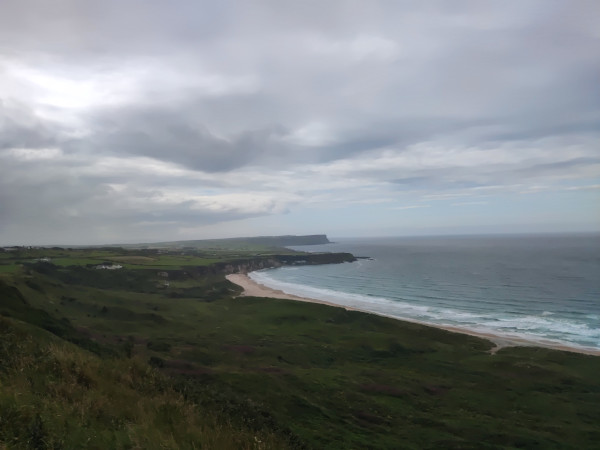 Looking towards the Giants Causeway

At Ballycastle there was lots of traffic and tourists. I stopped at a Spar and got myself an energy drink and some jam tarts. I sat outside near the beach with people passing. I looked at places to stay tonight, in Portrush the campsites looked like they may be as bad as the one last night, there was another campsite about 10k before Portrush which looked better. I decided to search for a hostel on my map and saw “Giants Causeway Hostel”.

I had no idea I would be passing the Giants Causeway today. In this case it made perfect sense to stay at a hostel, leaving my stuff secure while I visit. It would also be a perfectly acceptable reason to violate the 100k per day rule.

As I was leaving girl stopped and asked me where I was going, she was very enthusiastic and said she walked the Wild Atlantic Way in 29 days.

Listening to music though a single earphone (yay Bluetooth and not having a headphone jack) and proceeding with cloudy weather I got to the “Giant Causeway Hostel”, which was probably about a 15 minute walk from the Giants Causeway. I suspected they would be full, and they were (except for a private room for £65 but I’m not paying that if I can avoid it). The Spanish girl at reception phoned the main hostel in Bushmills and they did have a bed in a dormitory for £15.

It was a bit further than I hoped, and I checked in, had a shower and decided to walk to the Causeway. The receptionist said it was about an hours walk. Unfortunately I didn’t make it far. My ankle deteriorated quickly and I had made barely 100m before I went through the stages of “I’ll be fine”, “I’ll probably make it”, “this really hurts”, then finally accepting that there was no possible way I could walk 10 kilometers. I turned back and my ankle became very problematic and I had to walk very slowly to the off license to get a couple of beers.

I’ve decided to either run it or walk it tomorrow morning, as my ankle should be able to handle it then (fingers crossed).

[1] I don’t particularly like CC&B, or at least I don’t like them now. I used to like them when I was a teenager, usually at 3AM at Scoffers in Weymouth town center. I try to like them each time I return to the UK.