I’ve got a small tent. A small and expensive tent. I used to have a lovely 2 man Colemans tent. It had a porch big enough that I could stack all my baggage up in it and the entire side of the tent would open up, it would fit comfortably on my rear rack. I got the small expensive tent because weight. It was only after buying this tent that I don’t care about weight, I care about space. 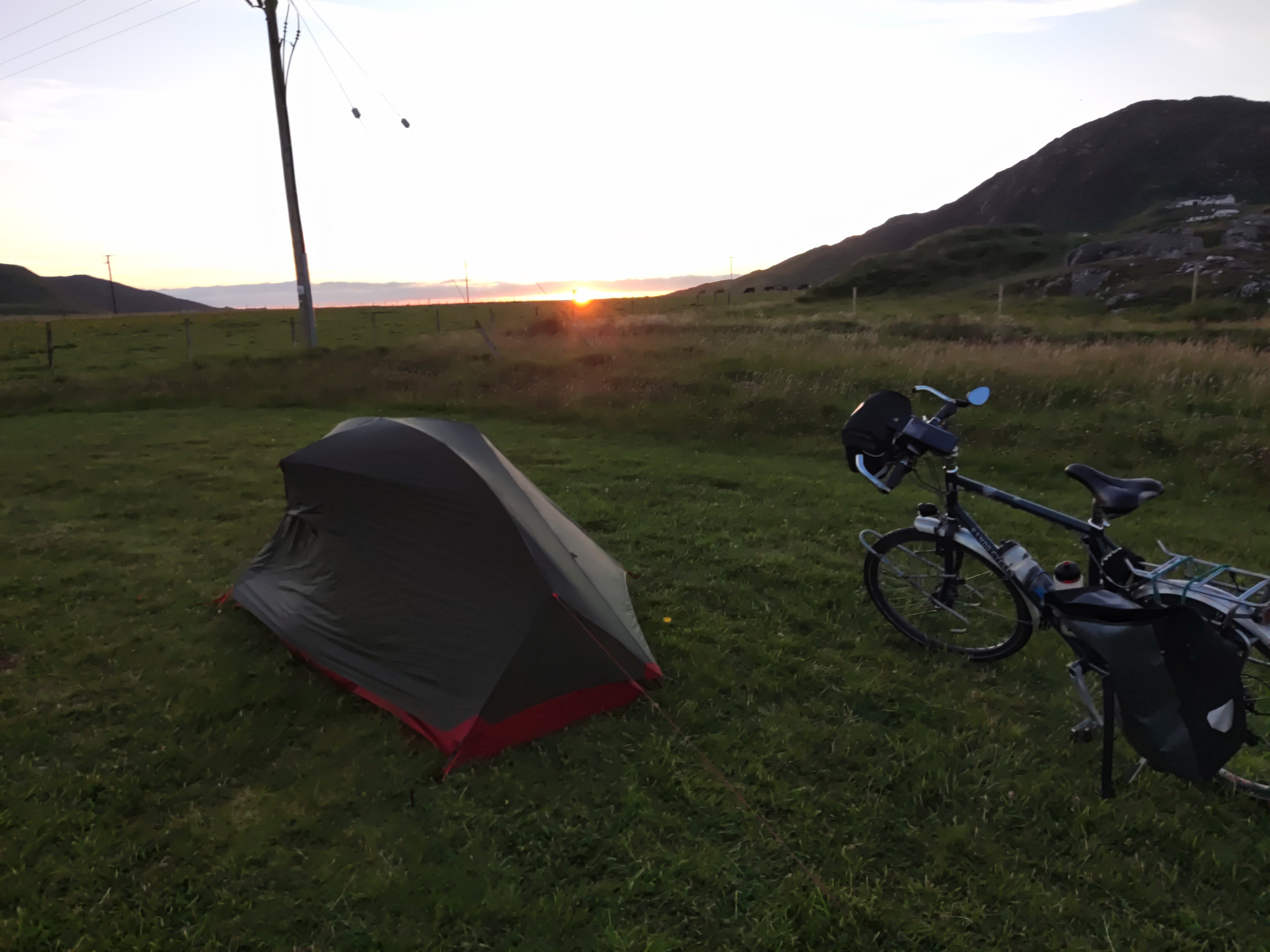 My tent at the end of this day

Today has been a very long day. I was in a desert of hostels of campsites, it was made even longer my my constant indecisions. At around 2PM I searched for places to stay - there was nowhere on the route, nothing. I eventually found a hostel about 10k or so north from the route, it was 10k north and considerably longer. I phoned ahead and the hostel was closed for maintenance, but, through Google I located a campsite next to it (it was not on my OSMAnd+ map). I phoned ahead and said I may arrive late “click click clack clack” “what mate?” “hello” “click clack” “hello?” “hello” “hi”. I told him I would arrive late and he didn’t ask any questions and said “no bother”.

So I had one option, but it was a long one. But this isn’t exactly true, there were other options. There was a hostel en-route which cost €140 euro for a night and some other hotels and B&Bs out of the way, of which the cheapest was €80. I decided to head in the direction of the hostel.

The cycle paths in general can sometimes seem like they want to kill you. It’s true that they avoid the roads, but after cycling for 6 hours you are on a perfectly quiet road which is flat then “EV1 THIS WAY!” you turn the corner and there is a big fucking hill - “THANKS EV1!”. Or you check the map and there is a perfectly straight road and then the cycle route which zig zags away from your destination and adds an addition 10 kilometers to your trip.

I took some shortcuts, and so my total journey was 140k instead of 170k.

Today was also extremely hot. I met an cyclist from the US (Washington DC). I was approaching a convenience store and saw a bike with very old paniers on the strapped on, I wondered if it was a tourer - there wasn’t much baggage. As I parked my bike he approached me, a guy maybe in his 60s. We had a chat, and he said that he’s done this route (well, he’s cycled around the entire country) several times, and today was the hottest he’s ever known it, and usually it was rain.

In my subjective experience so far Ireland is a hot country. Today especially so. My hands are red, I think my feet are sunburnt. 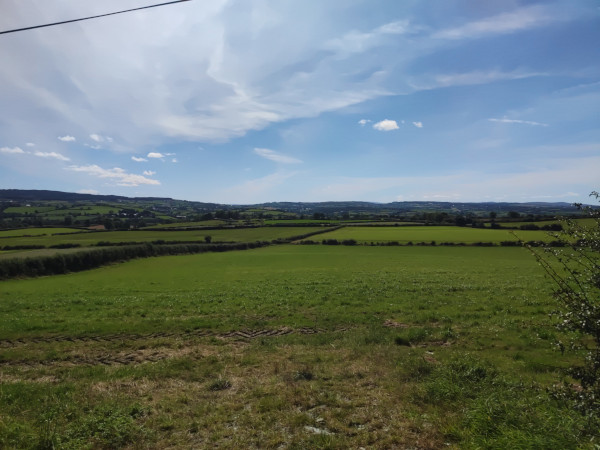 Where did I start today? In Meadow Field Campsite. Before I left I tried partially to download some music on the Wifi but it was very slow and I only got 2 albums. For some reason I don’t want to use my mobile data, as I’m so used to having a 500MB roaming limit - but - I don’t think that’s the case, neither in UK or Ireland. It seems I can now just use my normal data allowance as if I’m in Germany.

While I was speaking to the American he mentioned Euros, in the shop I have paid in pounds and I checked my wallet, and she had given me euros in change and the road signs are in kilometers. For some reason seeing the road signs in kilometers made me want to cycle on the wrong side of the road (they still drive on the left as in the UK). 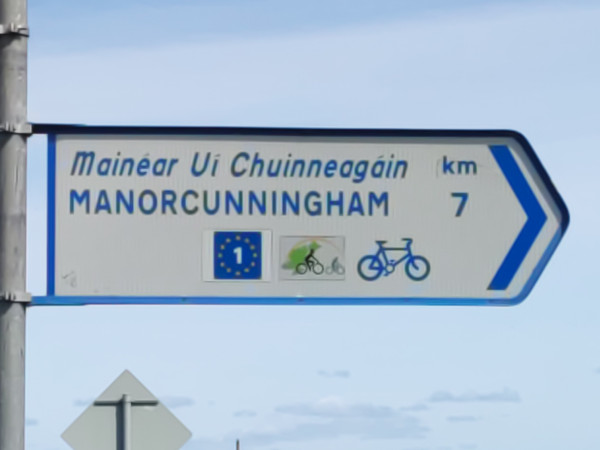 I had a bit of trouble with my bike early on, the front tire was almost flat, and I had to unpack 90% of my gear in order to find the pump. I don’t think it’s a puncture, but rather the valve. It’s a “presta” (?) valve which had recently “popped off”. I inflated it again and as of now it has gone down again, but not to a worrying degree. I’ve made a mental node to always get Schroder (car) valves from now on.

I didn’t wild camp, but was seriously considering it at various points. The road was relentless (at least when following the cycle path) and I began to question if I would make it to the campsite. 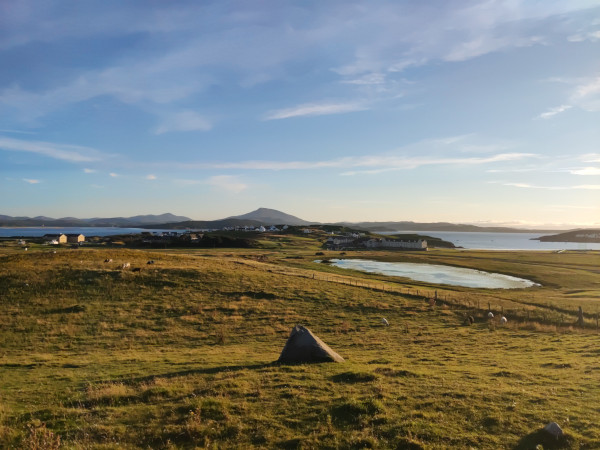 As I approached the campsite I was greeted with some ruggedly beautiful terrain. I climbed over a few hills and descended into a little valley where the campsite is. I’m in the corned of a very large and sparsely populated field, I can’t hear my neighbors and they seem quite pleasant anyway. It cost €15 again, which is perhaps a bit steep considering there is no kitchen and the drinking water for all the campers seems to be provided by a single tap in the field. But I can’t complain, I will sleep well tonight. 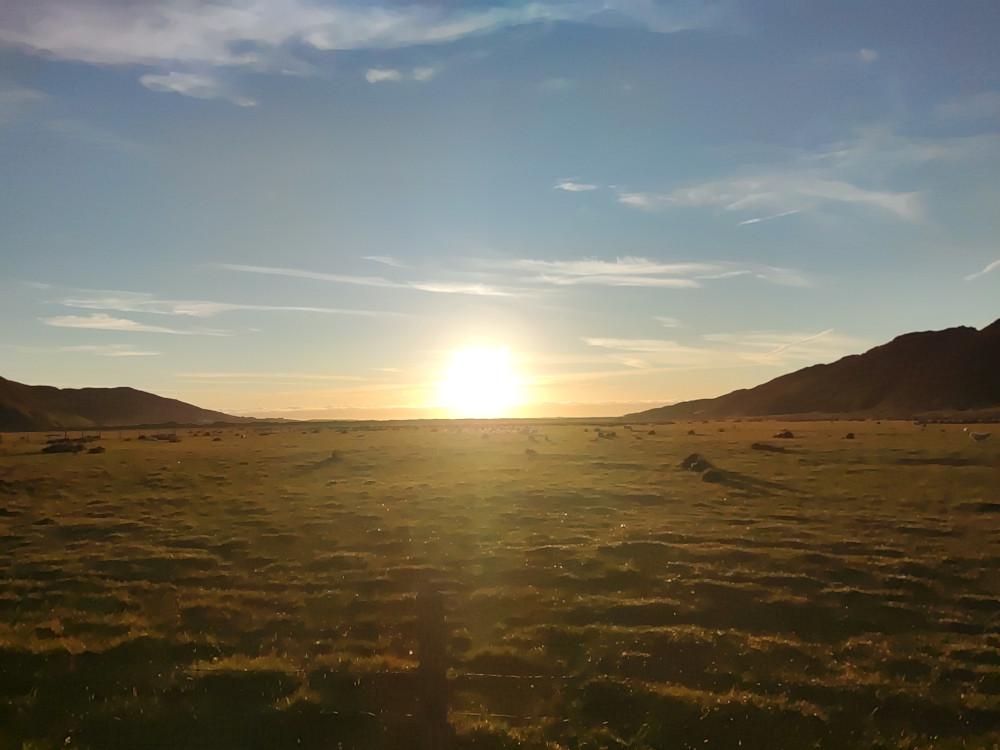 For dinner I cooked the remainder of my pasta from last night and used the rest of the bolognaise and cheese and drank a cider.

My laptop is now on 10% or less, I think I can partially charge it from my battery pack, but have to be careful not to leave enough power for the phone. I’ll need to recharge soon.