I’m currently sitting in the corner of a shelter on what is probably one of the best campsites I’ve stayed on. There is a fire burning and josticks are burning, everybody is very sociable and it feels more like a good hostel than a campsite. It has a filter of over 18s only, so no kids running about. Although there are a bunch of school kids doing their Duke of Edinburugh but they are very civilised. It is a welcome end to a pretty tough and mentally challenging day.

Today was supposed to be a rest day, just 60k to the campsite. I was feeling exhausted from yesterdays 137k and was looking forward to getting into the campsite early to rest. The campsite had been recommended and when I phoned ahead this morning the guy “yeah, we’re pretty full, but as you’re on a bike I won’t turn you away”. The guy sounded practically welcoming and I anticipated the campsite to be as I found it.

This morning I lay in bed until 9am (packig up an hour later than normal), I packed up and went to refill my water and dispose of my trash before leaving. I couldn’t find anywhere to put my trash, so I compressed it all to about the size of a brick and put it in my handlebar bag, intending to dispose of it at the next town, I didn’t know at the time that I would be unable to find any bins in any town today, and so this brick of trash stayed in my handlbar bag the entire day, preventing me from usig it properly.

Trash i couldn’t dispose of

The sun was out again, and it was blazing. My skin had already taken a bashing yesterday, with some foresight I should have got some sun protection at the pharmacy in the first village, but I didn’t, which would cause problems later.

After following a busy(ish) “N” I rejoined the EV1. Looking at the map the route looked erratic, and I suspected it could be challenging, but I reasoned that it was only a short distance.

I wrote in the blog last night that my tire had deflated but I thought it was the valve, I didn’t reinflate it and after a couple of hours it was almost flat.

The route was tough, it was up and down on poor quality roads. It would have been fine if it were cloudy, but the sun was relentless and I could feel myself burning, and now my tire was deflating. 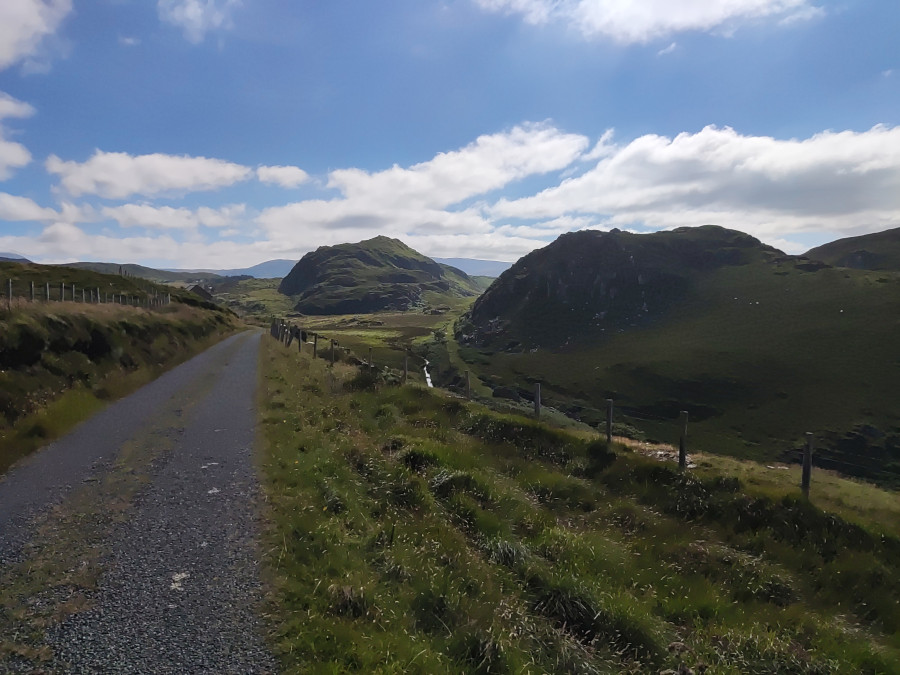 I sheltered behind a bush and optimistically pumped it up again, I also tried to cover my skin, I put some cycling gloves on and some socks under my sandals. I struggled on, but soon the tire was going down again, and as I rounded a corner I could sense that I couldn’t ride it any longer, so I got off and walked. I needed to find somewhere to shelter in order to fix the puncture and there were very few options.

There was a half-built house and I thought I would wheel the bike around the back in the shade, as I crossed the coutyard I felt my feet get wet. I walked ino a bog and my feet and wheels were covered in slimy muck, socks and all. I pulled out and continued walking my bike (my socks and sandals squelching) until I found bridge with a stream running underneath shaded by trees. I took my wheel off, pulled the tube out and patched the tube. 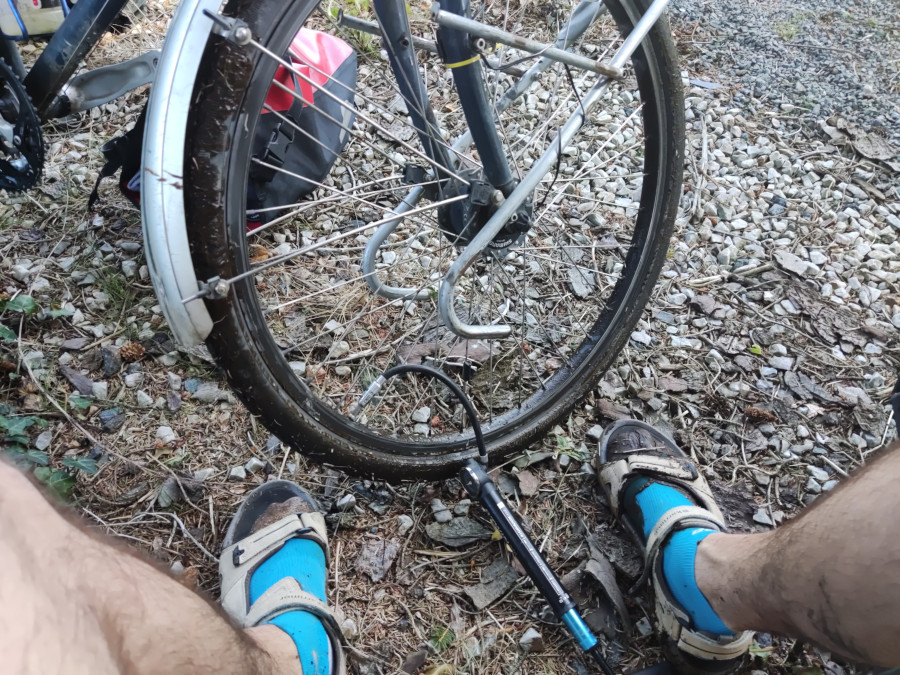 Fixing a puncture is (for me) a labor intensive process, removing the tire, finding the puncture, putting the tire back on, and then reinflating the tube with a tiny pump.

I carried on, and then I thought “I forgot to check and remove the thing that caused the puncture” and sure enough in 30m later it was flat again. I was now pretty angry at my situation and I felt like throwing the bike into he stream. I removed the wheel again, and indeed I found a large thorn which had penetrated and caused the first puncture, but the previous repair was still fine, it had not re-penetrated, instead there was another puncture which I fixed, although I couldn’t find the cause. 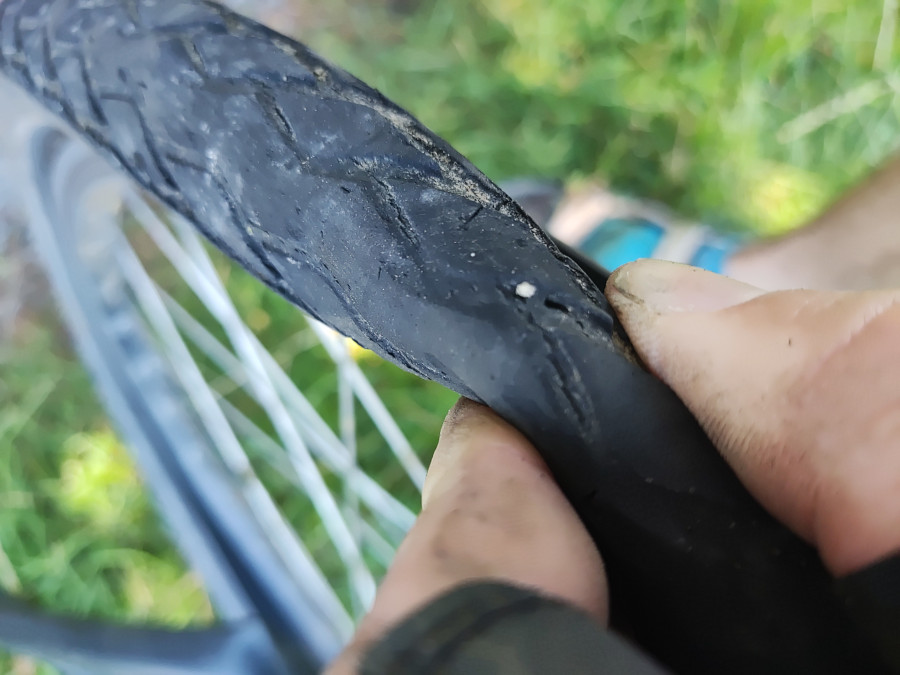 As I put the wheel on again I was not sure I could cope with another puncture, fortunately the second repair seems to have held.

The remaining journey was sceneically not unlike some parts of the Pyrenees, there were three looming mountains and vast amounts of brown undulating wild land.

I slogged on, stopping once by a stream to attempt to clean my muddy feet and fill my hat with ice cold water and putting it on my head. 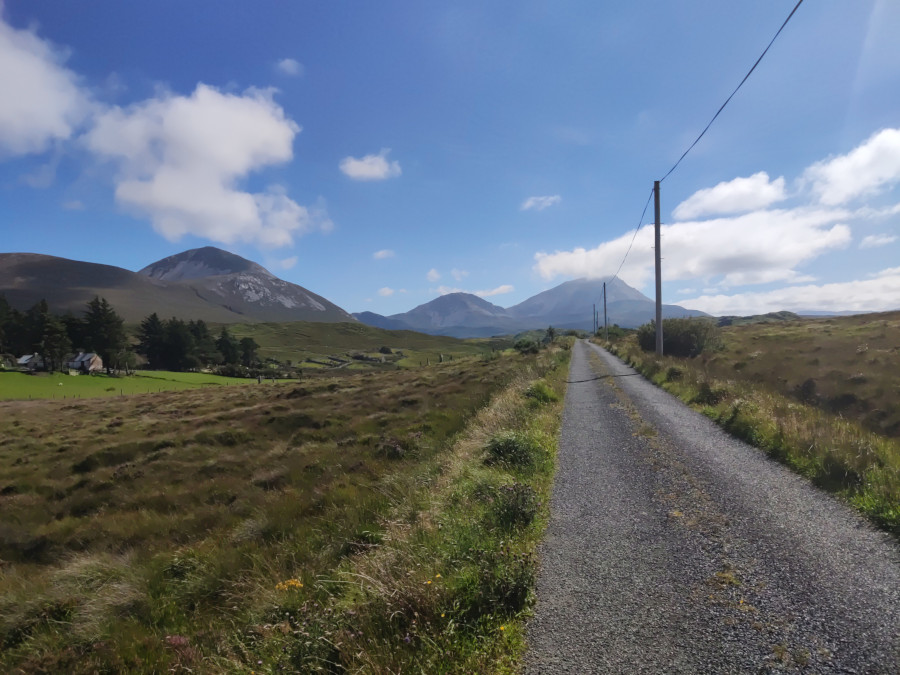 When I got to the campsite at around six I was given a quick guided tour by the owner, “how did you find it?” “tough” “it’s supposed to be tough” he said matter-of-factly. I then put my tent and fell into a coma for one hour.

The campsite didn’t have a place to plug my laptop and “work” but it did have a kitchen, and I cooked my food and charged the laptop, also leaving my battery pack overnight to charge. The battery pack was mysteriously empty when I got to this campsite, I’m not sure why as it seemed to be half full not so long ago.

I think my body will adapt soon, my skin will tan and my muscles will level up. But for now I need a rest, I might see if I can arrange either a couple of days in a hostel (which doesn’t look good, most of them are booked up) or a hotel.

Hotels in Ireland are expensive, as I’d be looking at, on average €80-100 per night, which is about a weeks camping, or 3 or 4 nights in a hostel. So I considered maybe booking a hotel and aim to get there early so that I have most of the day to relax.