The man wheeled up to me on a bicycle “the accomodation is round the back, follow me”. We went round “the back” and there were 3 people, 2 swiss people smoking and a local you wouldn’t want to get in a fight with. “Your room is here, but I haven’t got a key, because I’ve given the keys to the others - but it’s OK, you can just put your hand through the window” and he looked at me and the swiss people as if it was self evident and normal.

This place had good reviews on Hostelworld, I don’t know how. It’s not a hostel as you would hope for one, 5 people in the room I’m in, and it’s a small room. I’m not even sure if we are sharing the room with other travellers or local heroin adicts.

It’s not the worst shithole I’ve stayed in, but at €30 a night it’s the most expensive one. The Swiss couple looked like they were in shock, they gave me their key explaining that they would be out late.

On the door there is a sign “Checkout 10AM - Late fees apply”. The bunkbed wobbled and creaked loudly as I clambered on top of it. At least they provided a towel and the sheets were clean.

I am staying in the town of Bundoran, which seems a bit rough and run down, yet at the same time offering very expensive accomodation. 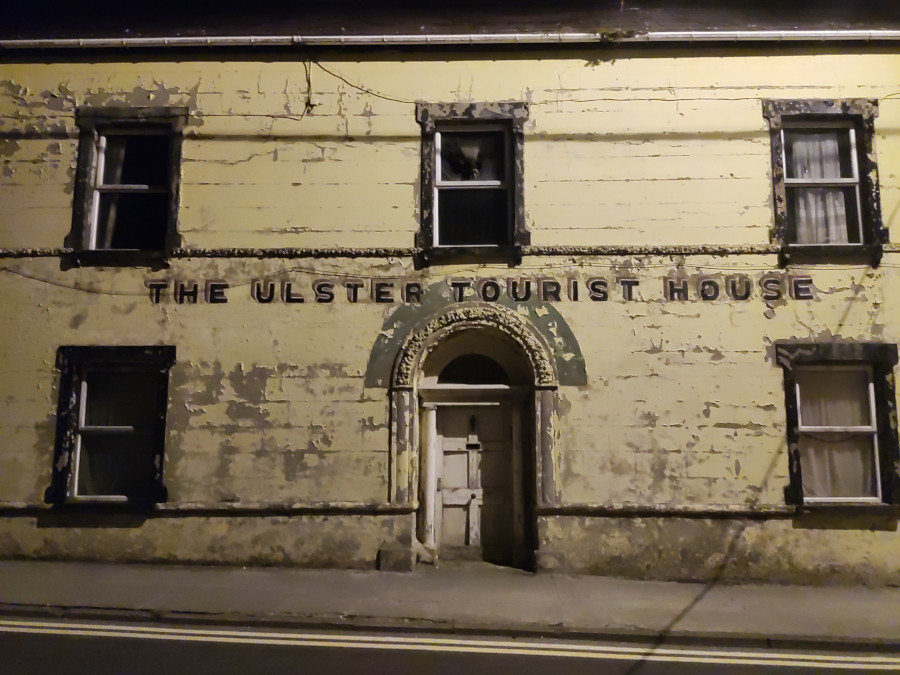 But I am now sitting in an Indian Restaurant waiting for some expensive food, the menu says “Rice included with the main dishes” except there is a sticker on one page of the menu which says “Rich is not included with any of the main dishes”. Unlike all the other restaurants in town which seem packed, the Taj Mahal has only two occupied tables.

Today started in the Sleepy Hollow campsite. I really enjoyed the atmosphere, I felt perfectly confident in leaving my phone and laptop charging in the kitchen for example, and by the end of the day I had spoken to half of the people there.

There was a French cyclist who was wild camping his way accross Ireland “how do you know where to wild camp?” I asked him, he looked puzzled “anywhere” “but what is a good place?” “normally, with shee” “eh?” the shee, bahhhh, le mouton, I open the gate and voila". He said he was going to do 70k today and then leave his bike at the base of the mountain and hike up it.

I’ve just purchased a 330ml bottle of beer for €4.50 and there are midgeies here.

THe weather looked like it might be better “yes, I think this cloud will come over” the french guy said confidently. he was wrong, in a few hours all cloud cover was gone. But today wasn’t quite so bad as I purchased some sports sun lotion as I left the town, I guess the difference with the “sports” sun lotion is that it stays moist and my arms and the back of my hands were glistening in the sun all day. 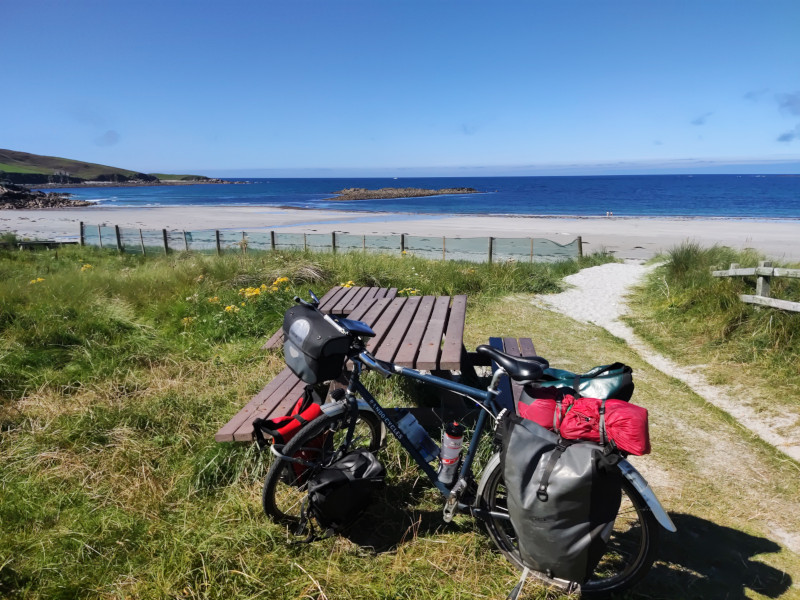 I stayed on the EV1 for the first 3 hours, over wild but by now familiar terrain. It was very steep at times, and I was crawling up the small roads at 3kmph. “where you from?” a white transit van with three passengers pulled up beside me as I conquered one of the hills “are you lost?” the grey haired woman stared at me with no trace of joking “no, this is the route” the other passengers laughed “can i give you a lift?” “no, i’m good!” “you must be pretty fit” “not really, i get fitter as i go” “have a good journey” she said and drove off. 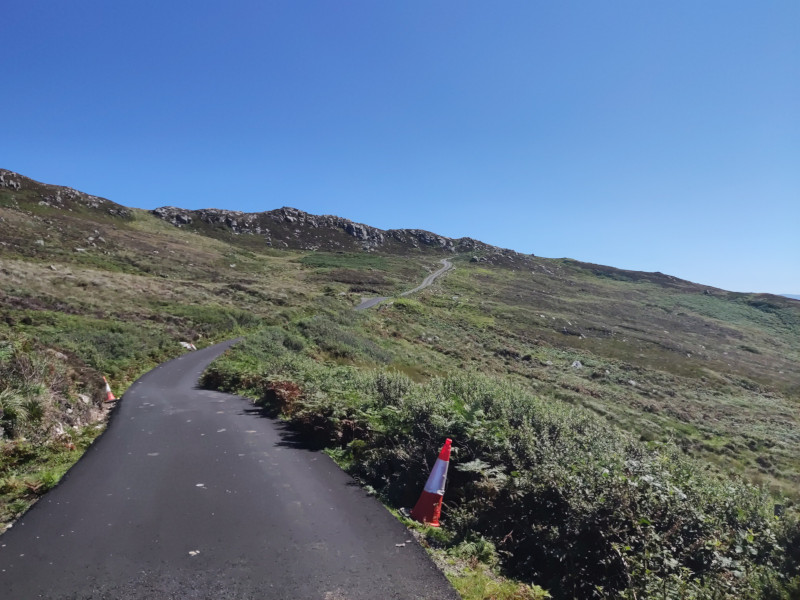 That lady was not from Ireland, she was from Notinghamshire in England. But the Irish are exceedingly friendly. The common greeting in Irelad seems to be “how are ya?” to which I normally reply “good, how are you?” and almost every single person in the street will smile and say hello to you. 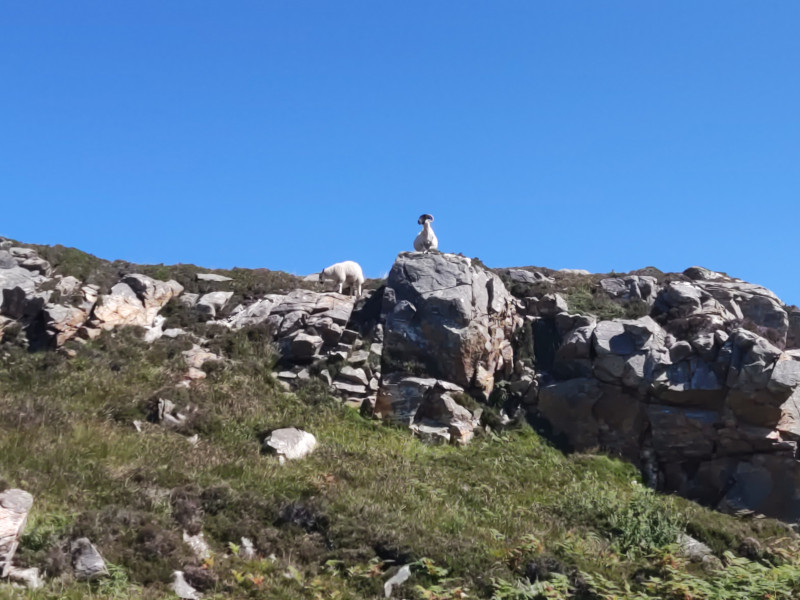 One of the items on my shopping list was a groud sheet for the tent. If I was to “couche avec les moutons” (sleep with the sheep - and it looks like wild camping is becoming the only way to financially survive Ireland) then I needed a groud sheet for my tent as I have a lightweight one-man tent and an air matress. Any sharp or prickly object on the ground is liable to stick throuh the flimsy material and puncture my air matress (I hate punctures of all kinds, but micro-punctures in air mattresses deserve a special place).

I passed a general agricultural store. which seemed to be both a supermarket and a hardware store, and a “general agricultural” shop. I went in and asked the guy if he had any tarp suitable for a ground sheet, he pointed at this huge roll of plastic. “too big” i said, “does it need to go under the tent?” he asked, “yeah” i replied, “follow me!” he took me round the back into a large warehouse and stuffed in between two racks was something similar to a large, heavy duty, plasic bin liner. Here you go! He held it in both arms and the mass of folded plastic obscured him from my view. “It’s a bit big” he took offense “You don’t get it do you? I’m giving it to yer for free”, “well, I guess I could cut it down, thanks!” the missing context was that I’m on a bicycle. So I left the hardware store with a ginormous bulk of harvy duty plastic. 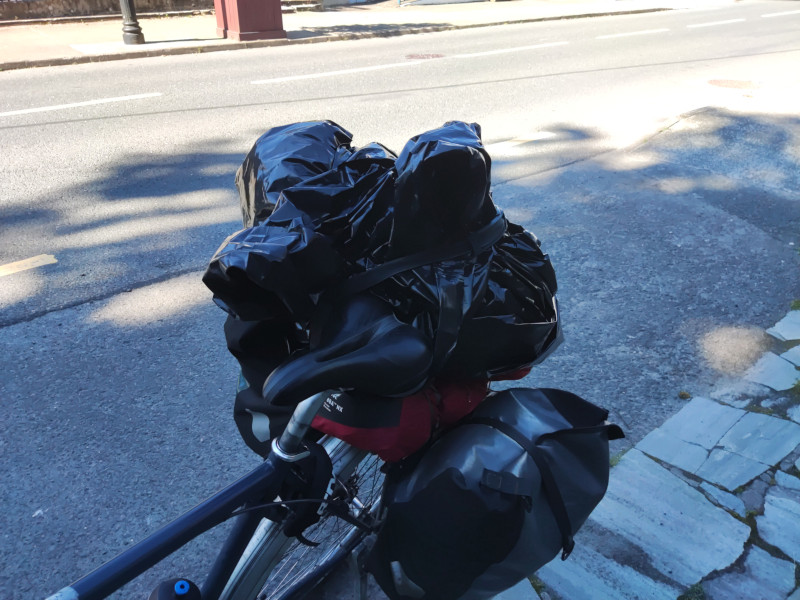 The Plastic Sheet which I had to cut in half

I found a quiet corner, got my knife out and began hacking it in half. This work compete I took the smaller half and folded it up so that it would just about fit under my tent on my rack. It’s probably still far too big but I can redfine it later. The larger half I made as sall as possible and put into a bin.

Before I found the bin my rear wheel slipped out of it’s socket and I was stranded in the middle of a junction. The wheel had dived into the frame and I had to carry the bike to the side of the road where there were road works. I was quickly able to loosen the quick-release lever and move it back into position, but then it came out again a few minutes later, I performed the same procedure but made it tighter and it seemed to hold.

I was considering to sleep with the sheep, but the idea of staying in a hostel and getting a rest day was very appealing. There was a hostel but it was another 80k even if I took the major roads. I had already done 50k by this point, and only had 5 hours before the check-in closed. I decided to book it and I almost booked 2 nights, but now very happy that I didn’t.

Tomorrow doesn’t look much better r.e. accomodation, although there seems to be hostels they are all booked out. the hotel prices are through the roof and the campsites are few. The next campsite seems to be in around 140k, so tomorrow could be another long day, or I can couche avec le sheep.