“Hi, it’s Dan, I booked the single bed room, I think I’m outside but I’m not sure because there is no internet, I can see a greenhouse” “Hi Dan, yes that’s us. I left the door open, your room is at the end of the corridor”.

It’s quite strange to walk into somebody elses house and have a shower without having met the person whose house it is. Today was the first time I tried Air B&B. The house is immaculate, everything is perfectly clean and I’m sitting in the kitchen with a fresh cup of coffee typing this blog post without having met the host.

Last night was a pretty bad accomodation, finally however I wasn’t sharing with heroin adicts. There was the swiss couple, a girl from Normandy in France and an older man who left the room at 7am without stealing anything.

I slept pretty badly, there were people talking outside at 12am and people talking outside at 3am. I was on the top bunk of a steel post bunk-bed and any sudden movement I made would cause the entire contraption to rattle and shake potentially waking the person on the bottom bunk and the same in reverse. Fortunately my bunk partner was very considerate when she got in at around midnight and was obviously aware of the unstable nature of these contraption and empathic enough not to distrurb me.

After a very patchy night I was awake early enough to leave earlier and get some breakfast. I stumbled out of the room and wandered down Westend Street and saw the “Westway Design” shop, which was actually a coffee shop that sold paintings. I hovered outside before comitting to go in - I half fancied a vegetarian full English breakfast but this place offered toasties which sounded good enough. 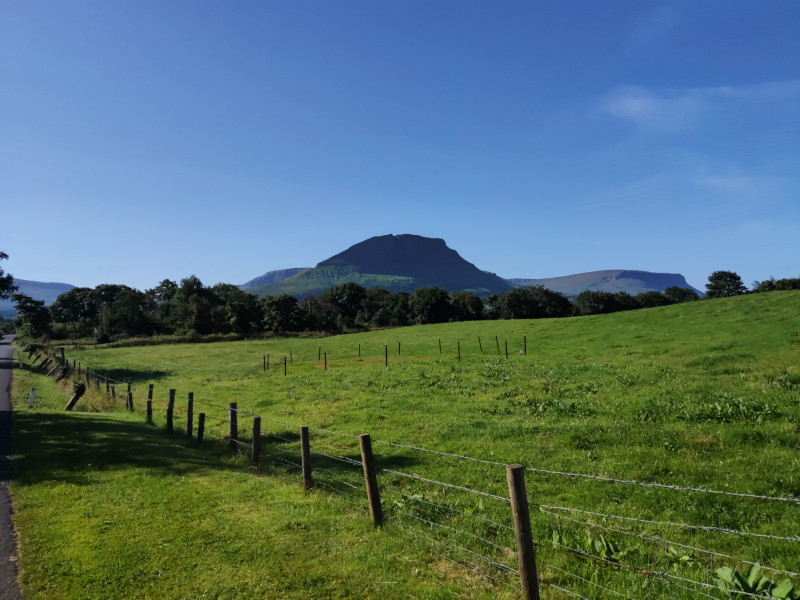 Yesterdays blog post was written in the Indian Restaurant, but when I got back to the Hostel everybody was in bed and the lights were off so I couldn’t attach the photos and upload it, this I did in the cafe before making my way back to the hostel (or rather “accomodation”) feeling better after a good coffee and some food.

When I went to get my stuff the french girl was still in bed, I said good morning, and as I was busying myself about she asked where I was from and we started talking. She was travelling around for 4 months working voluntarily. She was imporoving her English and we started speaking French. It’s been a long time since I spoke French on a daily basis but I seem to have retained most of it, I understand it but I need to search for the words, I stare blankly into the distance while trying to construct non-trivial sentences.

“Mais, avec le camping tu ne recontre pas les gens” we were talking about accomodation it’s true, in general you don’t meet people whe you camp, but you meet people in hostels, even in bad ones like this. I said maybe we’d meet later on, but probably we won’t. It was a nice start to the day.

And it was nice cycling out into the blazing sun for the 7th day in the row. The sun protection is working and my skin is tanning and it’s easier. I checked the temperature today when it felt particularly hot it was 27 degrees according to Google. 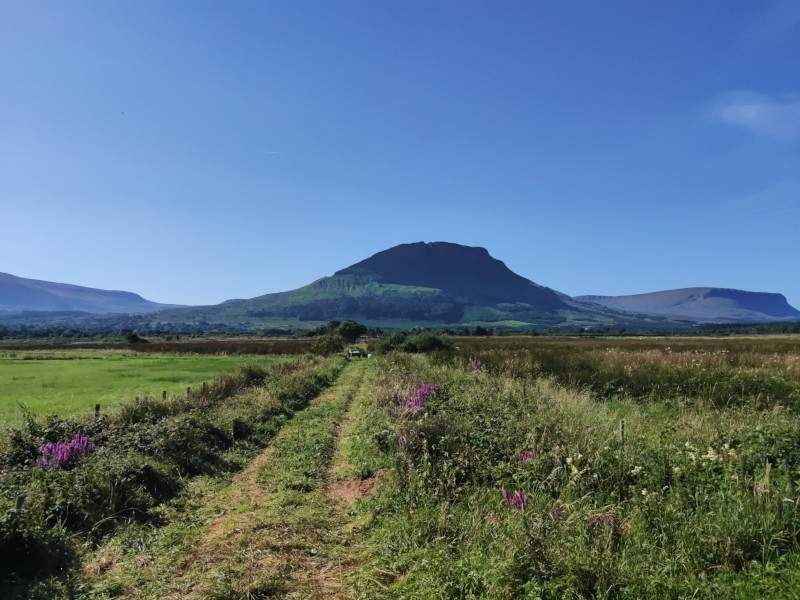 I started off as usual on the EV1 riding past Donegal bay, past some impressive mountains (Knocknarea) towards Sligo, in Sligo I stopped at a bookshop. I was hoping for some advice on a book, but wasn’t really sure how to start, you could say “can you recommend a good book?” but I didn’t. I said “have you got that Japense author? Haruku Marakimi” (I couldn’t remember his name) “Norweigian Wood for example” he didn’t have Harukumi, but he did have three Ian McEuwans and I got a book “The Child in Time”.

On my phone I installed a simple app to take notes, and one of the “notebooks” I have is “missing stuff”. With the book and ground-sheet ticked off there remains only the coffee maker and a baseball cap. And I’m starting to suspect the coffee maker is overrated compared to instant coffee in terms of the effect it has. The other notebook I’ve created is “blog topics” which now contains about 20 topics, none of which I’ve used.

Still in Sligo I saw a sign to a coffee shop in a courtyard. There I ordered an egg-mayonaise sandwhich with a cold soft drink and tried to find a place to stay.

The options are basically: my offline map, google maps , hostelworld, booking.com and, something new Air B&B. I saw an option on my way for €50, it’s above my budget but reasonable. The french girl from the morning had said she had seen a place on Air B&B for €60 and she went directly to the place and it was €35 “ils font une grande marge Air B&B” (or similar). That may be the case but I didn’t want the place to disappear before I got there.

It took me some time to get iteratively setup with Air B&B. The web app didn’t really work properly, so I installed the Android app and finally made the booking (taking what I am sure is a terrible picture of my sweaty self in the process). But the accomodation was booked and as it was not too far away on the main road (maybe 40k).

I’ve discovered there are two modes of travel: the EV1 - on which you will average a speed of around 10kmph and the main roads, on which you can average maybe 15 to 17kmph. In addition the EV1 will of course swerve away into the rugged areas and the distance will increase significantly. 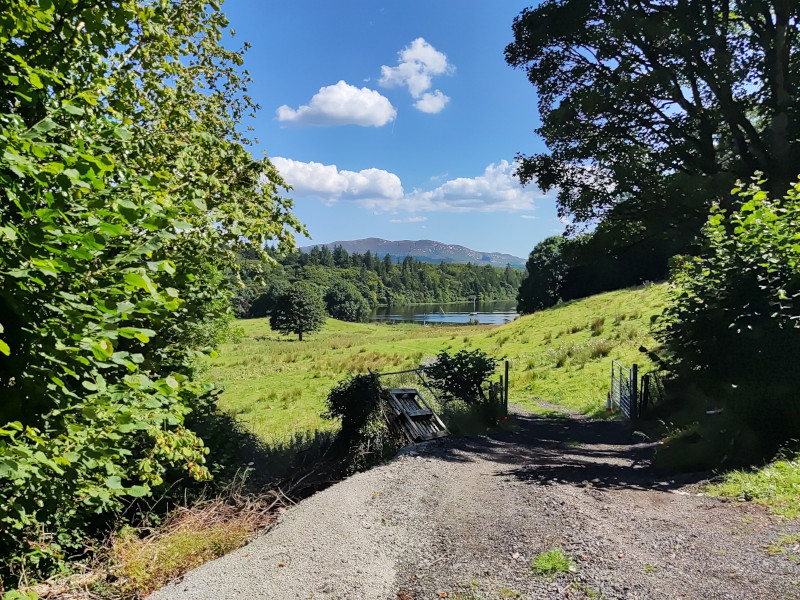 So having the option of the main road is good if you need to get somewhere, and today I had to get to the accomodation, but I could still afford to ride some more of the EV1 and rejoin the main road later.

After Sligo there was a detour into a (I guess) nature reserve, and I took the wrong turning and, seeing a small road which would correct my mistake went down it only to find that it had been “blocked” by a lump heap of concrete. Not deterred I rode over onto this amabdoned road which nature was reclaiming riding down it all the way to an overgrown gate over which I was required to throw my luggage and then my bike. 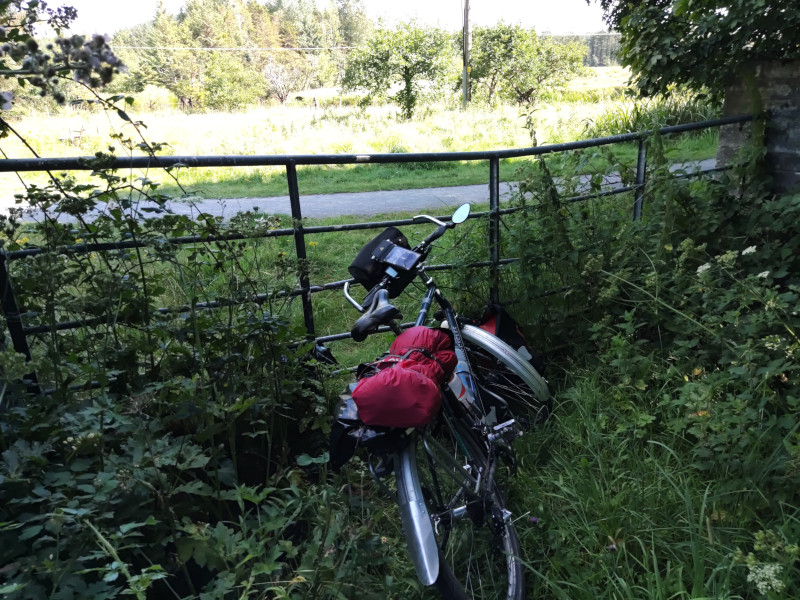 The path ran through thick, lush, forest and there were little art installations dotted about at intervals. 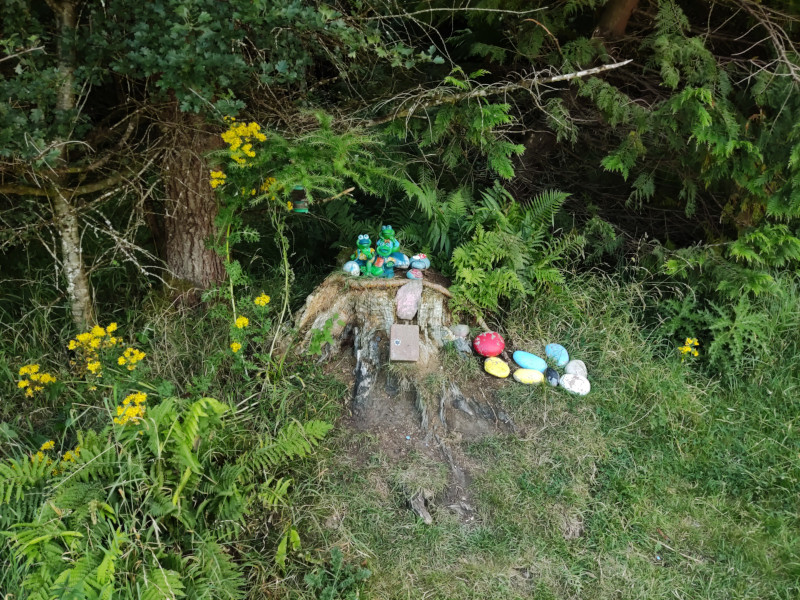 I stopped for another drink at a super market, getting a small can of Lucozade and useing the “quick checkout” which didn’t work and it stumped the best minds in the supermarket for many minutes before I was able to leave with my 1 euro purchase after this I rejoined the main road.

The road was busy, and the hard shoulder wasn’t very big, after some time there was a long queue of cars and there were road works and they were only letting cars through in “convoys”. I slowly approached the front of the queue, there was a van, there was a guy in the van, and there was a metal STOP sign. I stared at the guy awaiting some clue and he stared at me after that I just waited for maybe 7 minutes before the guy got out, I considered letting all the traffic go before me, but pulled forward “you go ahead buddy, you could’ve gone 10 minutes ago ha ha ha”.

After this it was just a standard slog on the fast main road to get to my destination.

I am now in the kitchen, and Sharron and her family have returned and she is cooking dinner and has invited me to join them.