I’m now sitting in a pub with a Guinness, the pub is part of a larger facility that also has a hostel and I’ve booked in for 2 nights. I’m waiting for a pizza which I may have ordered a prematurely as I’m not feeling particularly hungry right now, but it can’t do any harm.

Today was a good day, it was cloudy. There is a group of young Irish adults imitating wolf cries on the next table.

I left my wild campsite at around 8am on an empty stomach and without a coffee. I slept very well and I felt like lying in a bit longer, but as it was wild camping I wanted to leave early, even though I don’t think I would have met anybody if I stayed the entire day. I packed all my stuff up at night, so the tent only had the minimum amount of stuff to pack up.

There was a town which didn’t look so far on the map (Béal an Mhuirthead or Belmullet in English). I had my mind set on an English breakfast (or rather an Irish Breakfast as they call it here). The town was about 35k however and I found I had to stop to raid my food bag to replenish my energy. I had some apple turnovers from 4 days ago, which tasted almost as good as they would have when I got them, if not better as I was pretty hungry. At the stop the was a sign describing a folk legend where a Queen had a Heifer and a giant bull rose out of a lake, made love to the Heifer, and then went mad and jumped through a mountain, leaving a gap, or at least that’s how I read it.

My water was low enough, I had maybe a litre and a half and I made a note to refill in the town.

I cycled to the town, avoiding the EV1 and making pretty good time, there were no great hills today and in general I was cycling at a reasonable pace. I found a Bistro and ordered a vegetarian breakfast and started searching for my accommodation for the evening.

I noticed a hostel on the map, it was 20k off the route in the wrong direction, but checking it on Hostelworld, it did have a couple of beds, even if it was an expensive one (€29 for the 6 bed dorm, €29 for the 12 bed dorm). I decided to go for it, only after booking did I think to book another night and get a rest day. The breakfast was satisfying, even if it was a bit smaller than I needed. 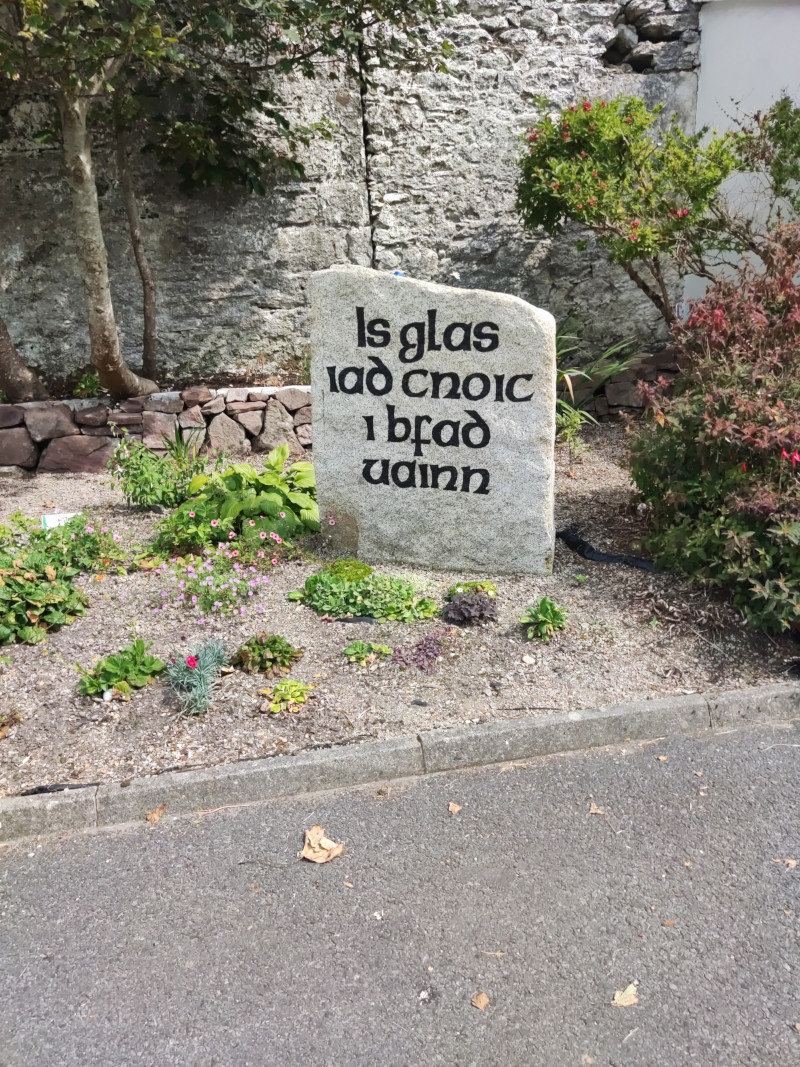 All signs (road signs too) are in Irish Gaelic

Feeling good (I had a plan) I paid up and left, I wheeled my bike around the corner to the supermarket and got some extra food to fill the remaining hunger gap, as I was checking out I remembered I forgot to refill my water “Strange question” I said the checkout lady “would I be able to fill my water bottles in here?” “No” was her succinct and final answer which she felt no need to elaborate on.

The weather was still cloudy, and I still had a litre. It would be enough and I left it at that.

I wrode through Ballycroy into a wide valley framed by mountains. The road declined gently downwards and I was listening to Led Zeppelin II on my single ear piece and I felt pretty good. 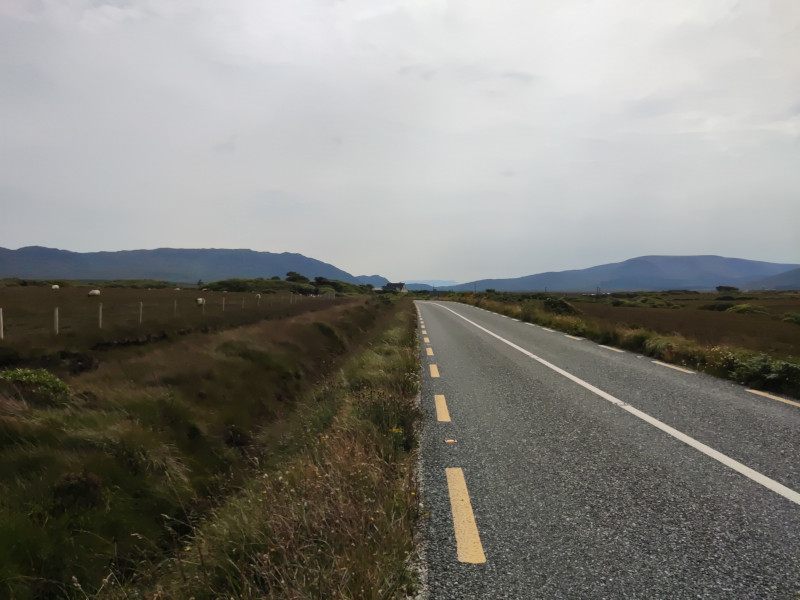 There was a ferry which would have cut my journey in half, but it went to an island, from which I would need to take another ferry. And the first ferry only sailed twice daily, so I figured the chances of me making it across faster were slim if I wouldn’t get stuck there overnight.

I’ve been developing a very intermittent cough over the past week, which I put down to the constant exposure to the sun and the dry heat. I feel absolutely fine, but the cough has been getting deeper. Hoping it will clear up with the rest day.

I was headed to the island of Achill. I had to cycle south before turning north again and heading towards the bridge to the island. The wind was blowing hard (and I could now see I was benefiting from a tailwind earlier). My shirt was wet, I’m not sure if with sweat or the moisture in the air (it was misty) and I sensed this probably wouldn’t be good for my cough, so eventually I put my wind breaker on, which saved my chest but made me sweat even more. 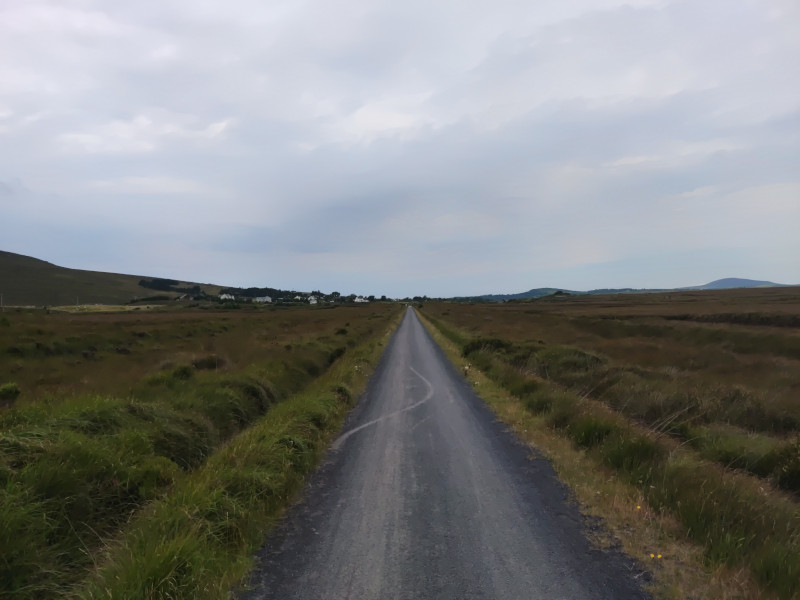 Arriving at the hostel I looked for the reception and saw a small door in a large gate which led to the pub garden. My bike wouldn’t fit through and I had to remove some of the baggage.

When I read that the bunks had reading lights I guessed they would be good bunks, and I’m not disappointed. They are solid wood. There are basically two types of bunks: ones that are steel framed and wobble and creak and ones made of wood which are solid and you feel like you are not in a symbiotic relationship with your bunk partner. 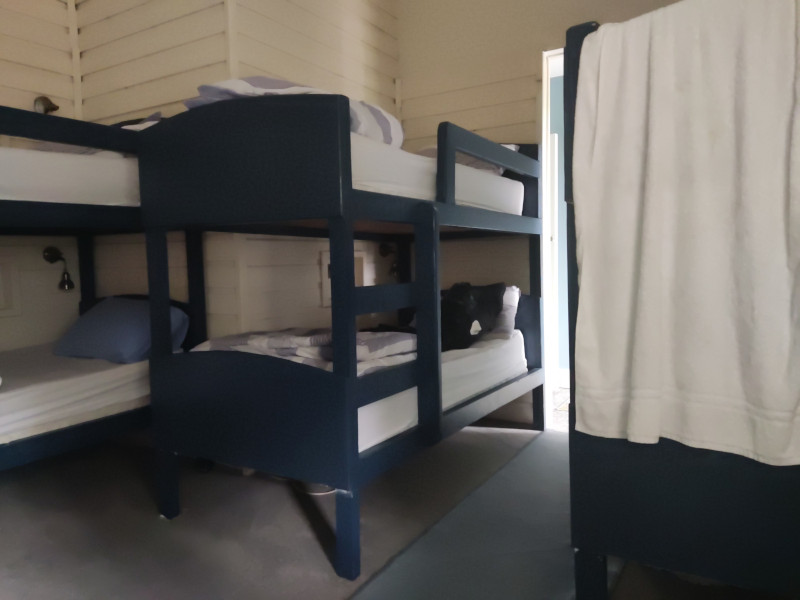 I’ve now finished my pizza and have about 1/3 of a pint of Guinness left. There is live music at the pub this evening which I might checkout with another pint, but after finishing this post I’ll probably lie down in the bunk and read for an hour or two.

Tomorrow is my first rest day. There is a 600m mountain to climb, and the ascent looks like just 2 horizontal kilometers, which my ankle should support. But the start is 5km away, if it weren’t for the ankle I’d jog the 5k and then try and run/jog up the mountain, but jogging 5k and either jogging or walking back is probably too much. Maybe I’ll cycle down, although I’d really prefer not doing any cycling tomorrow.