For breakfast there were flapjacks, toast and coffee. All complementary at the Ben Lettery Hostel. I was joined for breakfast by the Munich girl, she was going to stay another night and climb the mountain, presumably the Benlettery mountain which the hostel is named after, after that she would be doing my last ride in reverse and staying at the Valley House on Achill island (although driving).

Stepping outside there were lots of midges in the air, but I have yet to be seriously bothered by them, I loaded my bike, dropped my room key in the tray and cycled off, retracing the latter part of my journey from yesterday before turning off to head to Galway.

I was heading towards a large swathe of moor land which the EV1 cut across before crossing back to Galway, the alternative was jut following the coast road and cutting at least 20k off my journey. After cycling the first part of the route I imagined what those extra 20k would look like, and it wasn’t that special, and I decided to burn it on the road and get into Galway early and have a look around the city. 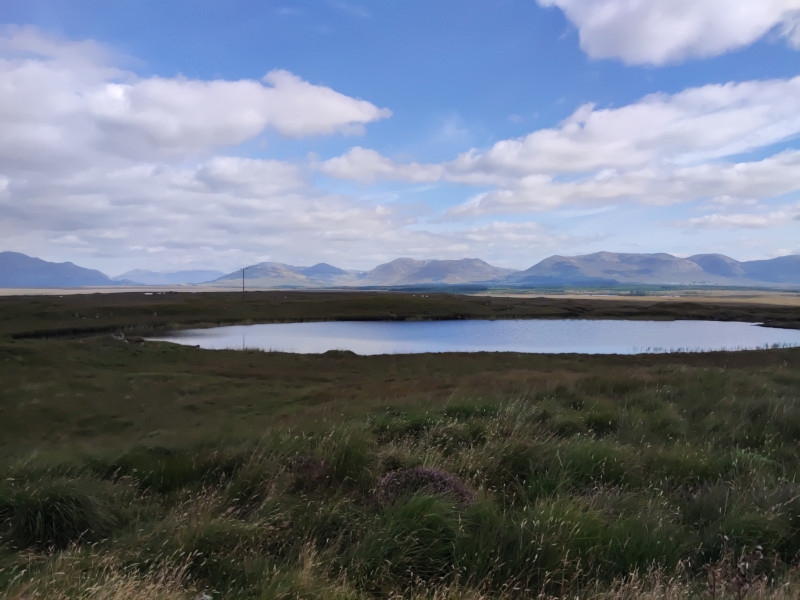 I stopped for lunch at a café, I intended to get a coffee, but the sun had just come out in force, and I decided to order lunch and a soft drink. It was only after I committed that I realised that it wasn’t a very financially sensible option, the wrap cost about €8 and the drink €2. I sat down and read my book, but the wrap was actually pretty good (fried egg, onion and lettuce), if not quite worth the steep price.

After lunch I hit the main road, Galway was just 37k and it was a short, but long journey. Short because not much time elapsed, long because it felt like lots of time had elapsed. The road was pretty busy and it was not wide, so often, if you were to see me from a helicopter, you’d see me at the head of a long tail of traffic.

By stages I made it into the city of Galway, navigating to Eyre square and then to my hostel. 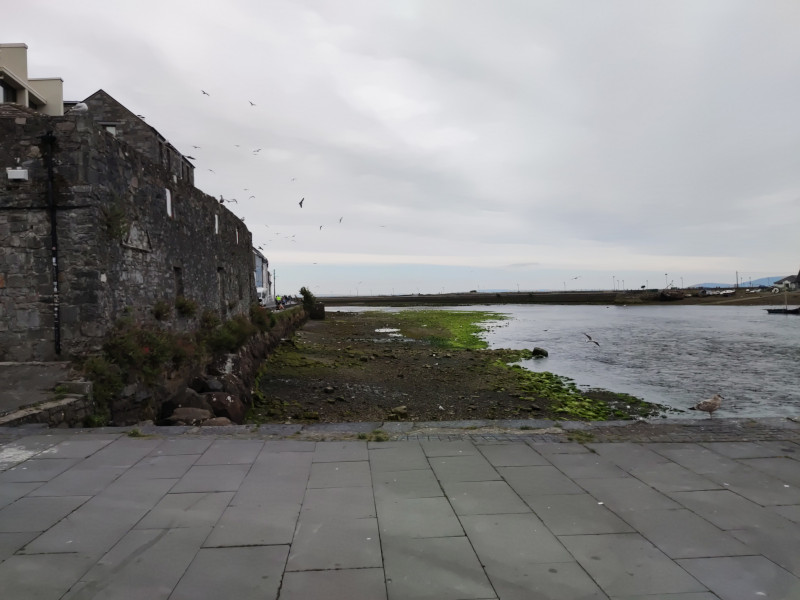 Galway docks from the Spanish Arch

This morning I had phoned aronud the hostels which seemed affordable (the cheapest being €30 for a bed in a dorm, the most expensive were €50). The first one “I have a bicycle, do you have anywhere I can store it” “there is a garage, we can give you a discount, it would be €8” “but not in the hostel?” confused silence “no”.

The next hostel I phoned reported that they could indeed store my bike, but they only had female dorms, and, that without assuming too much, that would not work for me. I agreed.

€8 for storing my bike seemed steep, but still cheeper to get this option at €30 a night, I booked it. As I rode out I thought that it doesn’t make any sense. I may as well park the bike on the street, and then it clicked: they thought I had a motorbike. Often people hear “bicycle” and nod at me, and then later they say “oh you’re on a bike!”. I checked the hostel website and they offered “bike stands” and my suspicions were partially confirmed.

I went into the hostel and after again hearing “motorbike” instead of “bike” she said “oh! well you can leave your bike in the luggage room” “that’s perfect!” I said. The hostel seems in other respects like a hotel. The rooms are quite plush and have ensuite bathrooms, although the beds are still pretty awful.

I’ve taken a walk about the town, the main street is very busy. In Eyre square there was a performance - a story teller.

She was telling the story of a man that got kidnapped by pirates, who tried to extract a ransom from him. She was very good and I was drown involuntarily in, I wanted to know what happened. But was disappointed at the end when “rather than ransom himself, he told the pirates he would stay with them! why? to spread the love of Jesus! children listen! who’s a pirate? you are! we all are the pirates, we all need Jesus!” (she refrained from calling us all sinners).

After this I went back to my room and collapsed for an hour, during which time my bunk-partner came in, a moody looking youth who didn’t say hello, but was grumbling and seemed to be in possession of a quantity of cannabis which I could easily smell.

I’m now sitting in an Indian restaurant, I got a large beer for €8.50 and the whole thing will cost me almost as much as my accommodation, but it tasted really good and is easily the best thing I’ve eaten since leaving Scotland. 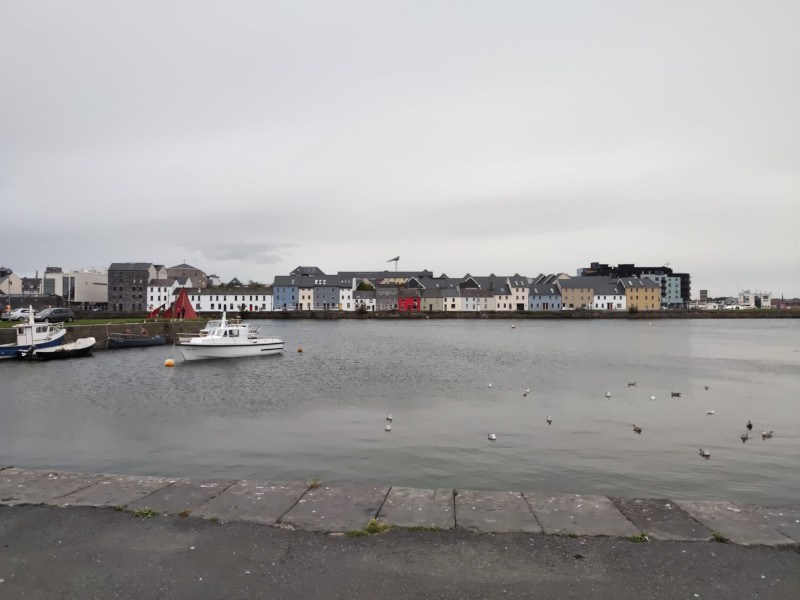 Houses on the docks