It turns out the moody weed smoking youth I shared my bunk with was not unsociable at all, but rather anxious and potentially stoned. When I returned in the evening after dinner he told me “I had pizza before going to the concert, normally I drink too much, but this time I ate too much and left early”. He had come down from Donegal for the concert.

I peeped out of the dormitory window, it was raining. Today was to be a mostly wet day which delivered more than expected.

I left Galway city by the coast into the town of Oranmore and then joined the EV1 into the countryside, passing an imposing burnt out manor and a (somewhat) more sturdy castle. 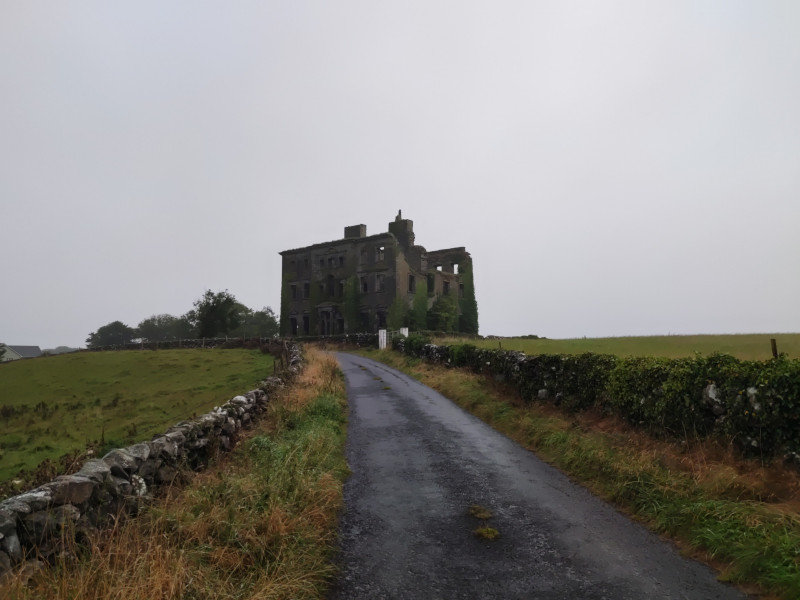 After a few hours I wanted to warm myself up with a coffee, and rode into a town, there was a coffee shop but there were already two cyclists (would guess in their 60s) awkwardly positioning their bikes outside, and I didn’t want to add my bike to the mess, so I searched around for another place before settling for a Eurospar supermarket which had a little café. I got my coffee, and some cake, and sat down, looking at where I might lay my head tonight.

There were a couple of campsites, both looked quite good. One on the coast (Riverside Camping) and one a bit further inland which proclaimed itself as a good base to “visit the house of Father Ted”. I like Father Ted so this was appealing, even if I wouldn’t actually go to the trouble of visiting said house.

Both of these campsites were slightly short on my 100k target, but there was little else beyond them. The campsite at the coast involved taking the EV1 which would logically lead around the peninsula and back again, a trip which would probably be 100k in itself. But I noticed there was a ferry to Tarbert not so far from the tip of the peninsula, and I could get that and save some time tomorrow.

As I collected my stuff from the table I saw the two cyclists who were parking there bikes at the cafe, sheltering from the rain in the porch of the supermarket. I went outside and said hello, expecting some kind of conversation but a brief acknowledgement was all I got and they were gone and 5 minutes later so was I.

As the day progressed the rain started to clear a little bit and I found myself in the Burren National Park, which is notable for it’s limestone hills. I saw a cycle-tourer riding in my direction, and slowing down, would this one want to have a chat? No, it was the same guy from earlier, and again the briefest acknowledgement and I carried on, saying hello to his wife a few hundred meters further down the road. 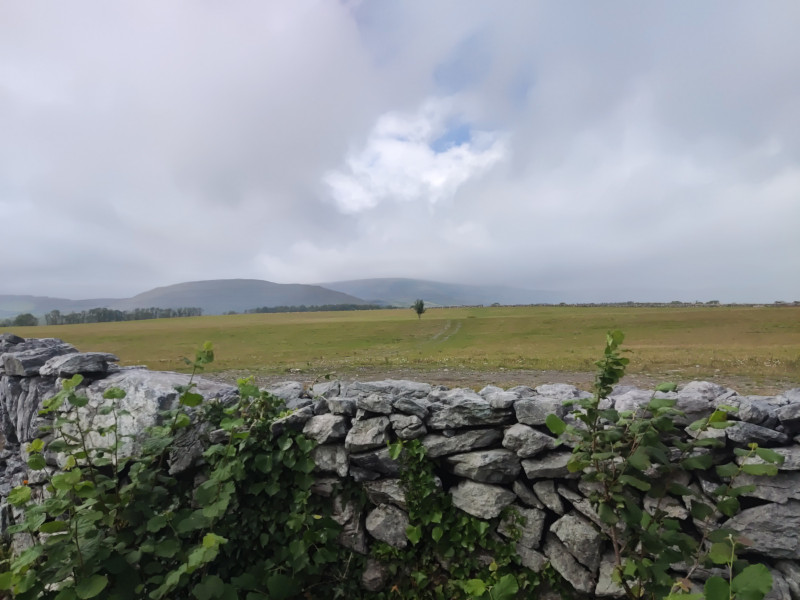 I stopped for lunch an hour or so later, sitting on a step for a lookout point, spooning peanut butter into a fresh roll of bread and reading a panel about the local environment. Taking off in the wrong direction, uphill, I only realised my error some 30m later. I could have carried on and taken a different route, but I was in no hurry so I turned back to the lookout point and took a different road which climbed steeply, revealing a great view just as the cloud was clearing. 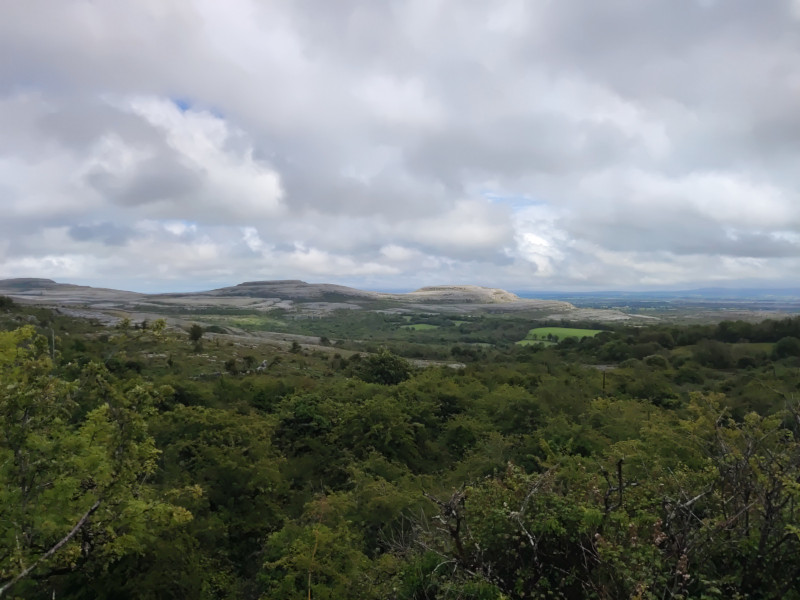 Up ahead I could see a red rain jacket making it’s way steadily forward and , behind, another one. It was the dutch couple. (I have no proof, but I strongly suspect them to be Dutch). Within a short amount of time I had caught up with them just as they were dismounting their bicycles to walk up a hill. I tried briefly again to get into a conversation “hello again, where are you heading?” “UP!” was the wife’s emotive reply, revealing some amount of stress “at least the weather is good now” sensing that there was nothing else to say, I cycled on past the husband who again barely returned my acknowledgement. 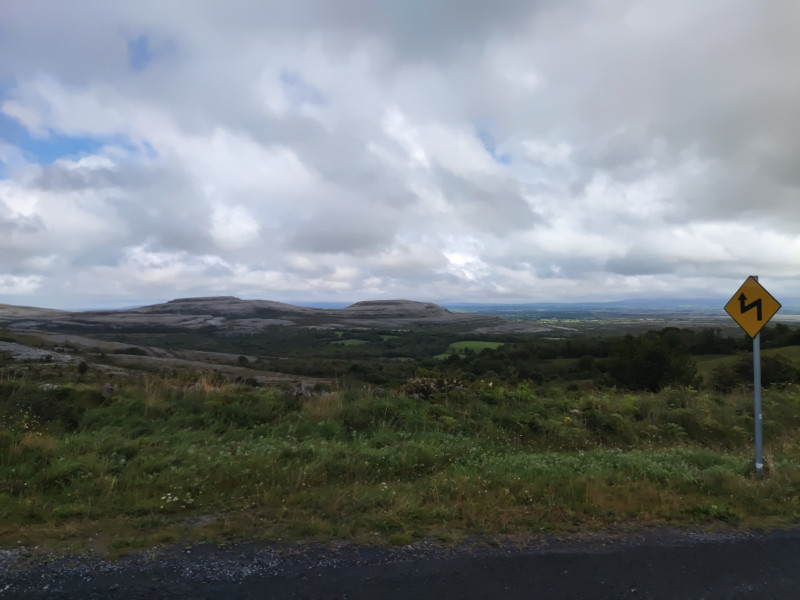 The wind picked up as I rode west, and at one point I saw a blur in my line of sight and felt something hit and get stuck between my lips, I spat it out immediately. It wasn’t the first time an insect hit me in the face, I think I swallowed a fly earlier in the day, but this was a big one. I cycled on feeling lucky that my mouth wasn’t yawning open when I noticed something on the sleeve of my rain jacket. It was a huge bumble-bee which was tenaciously clinging to my jacket in the wind. I unlatched my phone holder and flicked it off. 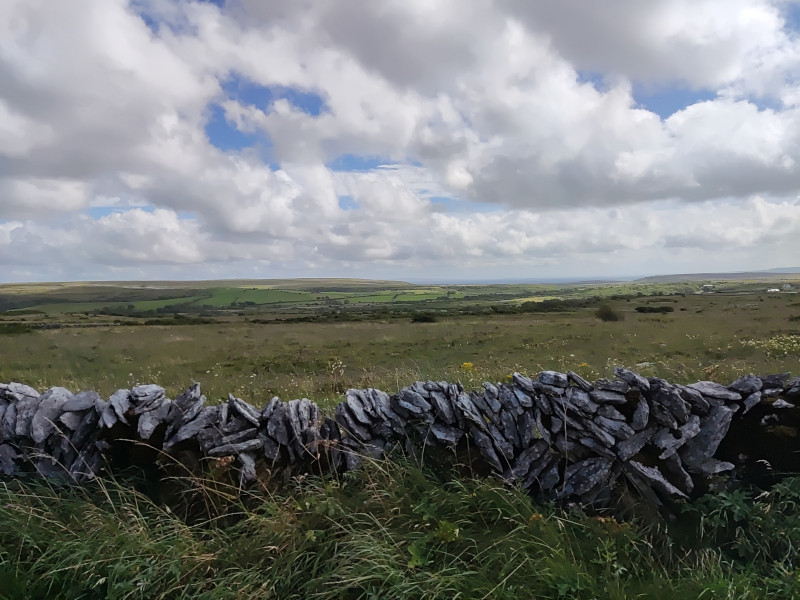 I passed a “portal” or Dolmen - imagine a unit of Stone Henge - there were maybe 20 people at or walking towards it. I passed it at a distance and was satisfied.

After this I had a choice - head directly west to the campsite, or head north on the EV1 and follow the coast around to the campsite, adding another 20k or so to my ride. Today I was lazy, again I had ample time (I would arrive at the campsite at 5PM) and I really should have taken the coast road. My decision was partly swayed by looking at the altitude analysis on my phone - it was a slow linear 18k descent all the way to the campsite. It was a lie, at best it was an interrupted descent, but it wasn’t the effortless gliding I had hoped for. 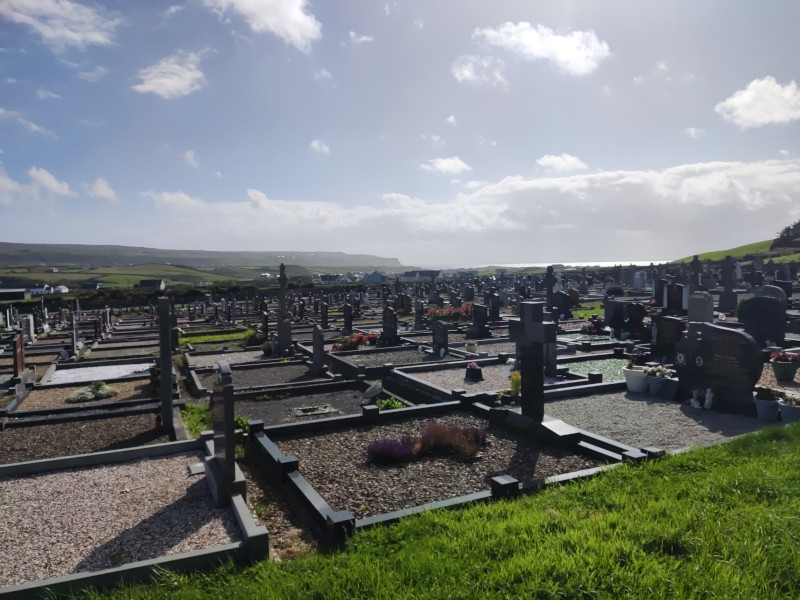 I’m now in the kitchen of the campsite, it’s only €12 for the night, €1 for the shower, and coffee is free. There is a games room upstairs with a pool table and comfy chairs, but it’s full of children at the moment. I’m camped by the river and hoping for torrential rain tonight in order to prevent people from sitting outside and talking until the early hours.

The plan for tomorrow is not quite clear. The Ferry is 60k from here if I take a direct route south, or I could ride the entire “Loop Peninsular” and get the ferry tomorrow. Once I get to the other side it’s 47k to the next place with campsites and hostels - the village of Tralee in Kerry which should offer some of the most spectacular scenery and tallest mountains. 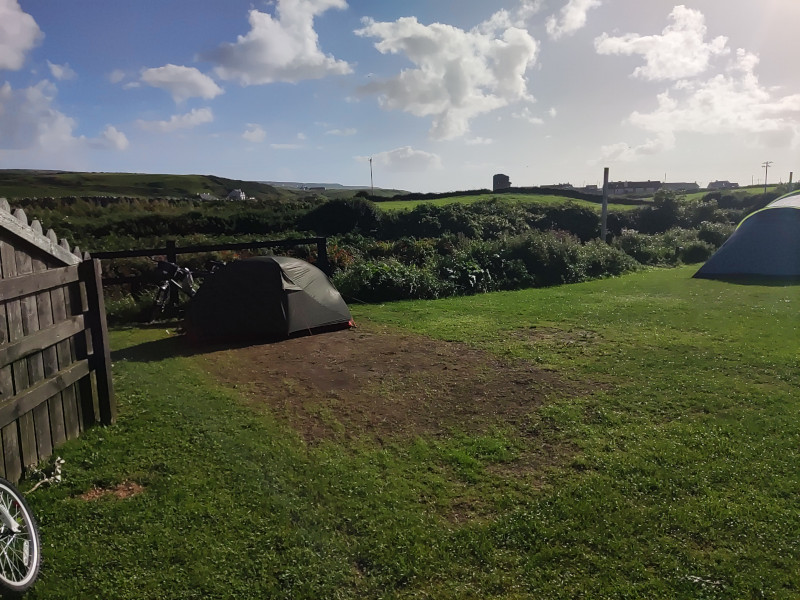